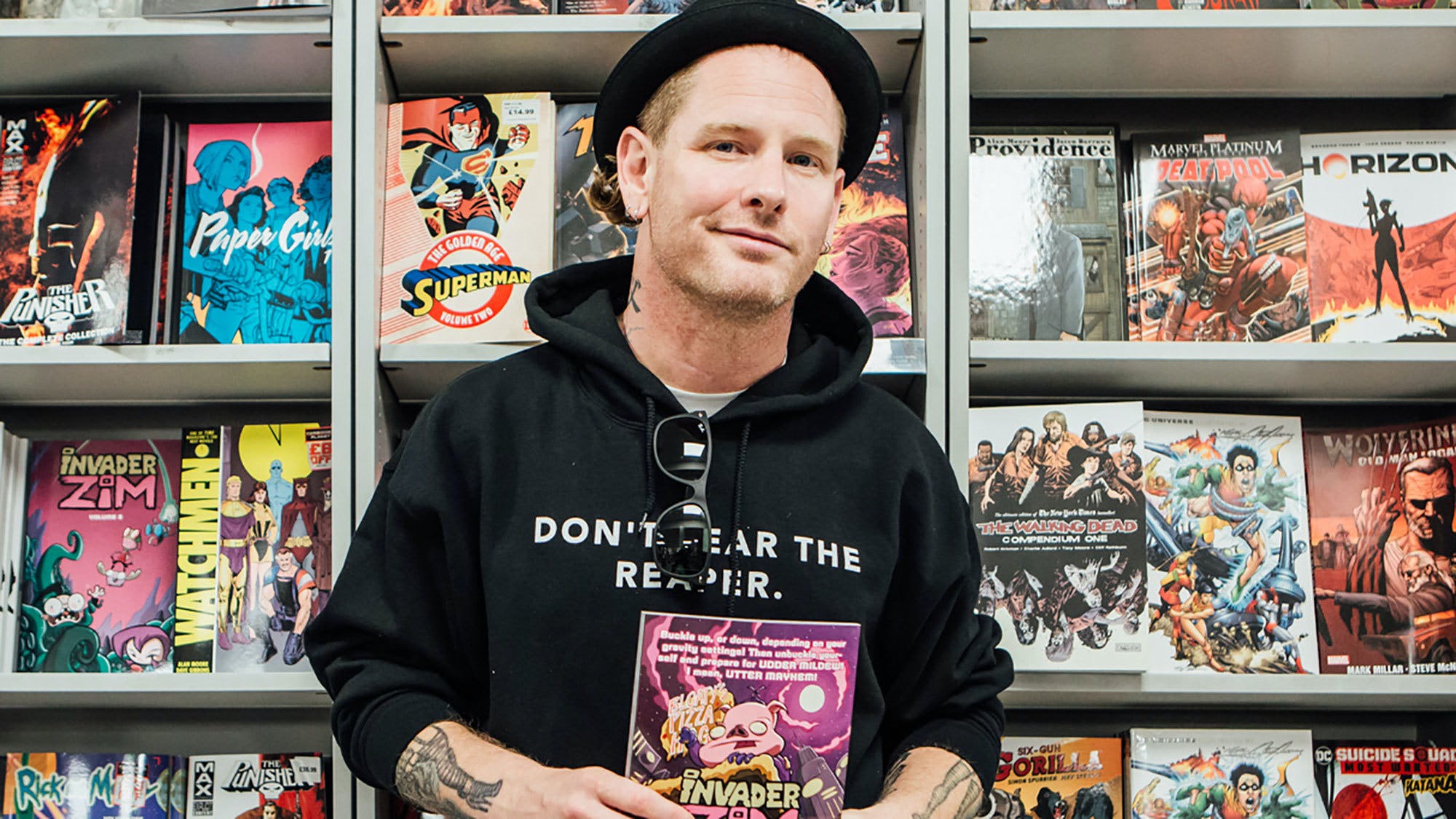 It's fair to say that Netflix's adaptation of The Umbrella Academy has been a success so far. Launching last year, the superhero series based on Gerard Way and illustrator Gabriel Bá’s award-winning comic books of the same name has already been commissioned for a third season.

But The Umbrella Academy isn’t the only comic the My Chemical Romance vocalist has put his name to. Before forming the band, he was a cartoonist interned at Cartoon Network and DC Comics. He’s written the adaption of MCR’s 2010 album, The True Lives Of The Fabulous Killjoys Doom Patrol, drew covers for Rex Mundi #15 and Neverboy #1. He also wrote Cave Carson Has A Cybernetic Eye, co-created Mother Panic and is the head of DC’s Young Animal imprint.

This collision of rock and comic books got us thinking. Which other rock nerds have dipped their toe into the comic book pool?

On January 12, 1965, Robert Bartleh Cummings was born clutching a comic book. Alright, that’s not strictly true but we honestly wouldn’t be surprised. “I started collecting comics in the early 70’s,” says Rob. “I remember the first book I ever bought was a Fantastic Four. Growing up, my comic tastes were pretty limited to either Marvel or DC. It seemed like there were only about ten titles, so it wasn’t hard to collect everything.” While juggling careers as a musician and horror film director, the erstwhile White Zombie frontman is responsible for a run of titles, including Rob Zombie’s Spookshow International, The Nail, Bigfoot, Whatever Happened To Baron Von Shock?, an adaption of his film The Devil’s Rejects, and The Haunted World of El Superbeasto. File the lot under ‘grisly’.

In 2011, the Rage Against The Machine guitarist and political activist teamed up with Dark Horse and artist Scott Hepburn for a 12-book series about a 16-year-old street prostitute who becomes a freedom fighter in a post-apocalyptic future. “My goal for Orchid was that it would combine the epic story arc of stories like Lord Of The Rings, Star Wars, Stephen King’s The Stand or Tomb, but inject it with class-consciousness,” Morello told Rolling Stone. “That’s something I’ve always thought was missing from those stories, where it’s always, ‘Let’s get the king back on the throne,’ ‘Let’s get the princess back in the castle,’ you know? And all these poor serfs and peasants are getting mowed down on the battlefield to try to get that king back where he belongs. That element always sort of rang hollow with me, and that has been corrected in the story of Orchid.” Fun fact: the debut issue featured a variant designed by Shepard ‘Obey’ Fairey.

The former Yellowcard frontman was invited by Marvel to write the script for the fourth issue of Edge Of Venomverse. It takes place after the events of the Old Man Logan story, an eight-part story released in 2008, and features a vengeful T-Rex. “I was beyond excited when I found out I was going to get to work with Venom for my first ever attempt at writing a comic,” says Ryan. "I don’t know if you can count the comics I wrote and drew during class as a kid. Spider-Man was a huge part of my childhood and Venom has always been, without a doubt, one of my all-time favourite villains in the Marvel Universe.”

Kiss are no strangers to the comic book world, which oddly began with an appearance in an issue of Marvel’s Howard The Duck in 1977. They’ve since appeared in their own series, including Todd McFarlane's Kiss: Psycho Circus (1997), Kiss Special Wizard Edition (1998), Kiss: Psycho Circus Comic Magazine (1999) and a 13-issue Dark Horse run beginning in 2002, featuring storylines by X-Men writer Joe Casey. There was Kiss 4K, which ran for six print and four digital issues, Archie Meets Kiss in 2011 and… you get the idea. Bassist Gene Simmons also released his own horror anthology, Gene Simmons’ House Of Horrors, through IDW Publishing and Simmons Comic Group. “I loved the anthology horror and sci-fi canvas and wanted to re-introduce the format into comic books,” says Gene. “The fact that I'm powerful and attractive will only add to the stunning effect of the stories.” Quite.

In 2015, the Angels & Airwaves frontman made his foray into the world of comics with the three-part Poet Anderson: The Dream Walker, co-written with Ben Kull and animated by Djet. A prequel to a short animated film of the same name, the story follows Jonas Anderson's journey into The Dream World, where he becomes a guardian Dream Walker called Poet Anderson, “who protects innocents while they sleep from the horrors their own dreams could pose in the Waking World.” That’s helpful.

The former Hole singer and guitarist teamed up with writer Stuart Levy and artists Ai Yazawa and Misaho Kujiradou for this 2004 manga series based in part on her life. We say in part, because the story follows an amnesiac girl called Ai – half human and half ‘Dougen’, a sort of alien angel hybrid – who moves from the war-torn Ai-Land to Tokyo with a heart-shaped box (cough) and attempts to relearn her past. Forging a new life as a rock star, she falls in love with a musician called Kent (cough, cough). “I have always loved the Japanese culture and the people,” reveals Courtney. “Princess Ai is a great character because she feels like my alter-ego, but in a fantasy setting.”

“Trapped in an alternate reality, the Human must make his way to the House Of Gold & Bones as he is chased by a crazed mob, and taunted by mysterious ally, Allen.” Not our words, but the words of Dark Horse, who published this four-issue mini-series written by the Slipknot and Stone Sour frontman. “When I was writing the story, I made a conscious effort to make it very visual, very evocative – something that the audience could grasp between the music and the story itself, regardless of visuals,” says Corey. “I loved seeing things and people who had been solely in my head come to life in colour on paper. Richard [Clark, artist] did such a great job of pulling my crude descriptions into amazing visuals – it was the sweetest part of this whole process.”

Stone Sour based their two-part album of the same name on the comics.

The Say Anything frontman loosely recounted his experiences living with bipolar disorder in Polarity. Released in 2013, this four-part series from Boom! Studios, featured art from Jorge Coelho and tells the story of a Brooklyn artist called Timothy Woods. After a car accident, he discovers that his medication has hidden his super powers. “The crazier he becomes, the more powerful he becomes,” Max said. “It was kind of my way of telling an allegory about how it actually feels to be bipolar, which is that you do have these enhanced sensory experiences. In this case, this guy can get enhanced strength and speed and can read people's thoughts. But it almost feels that way in real life. It's more of a comedy than anything, but at the same time it has lots of pathos and exciting moments so it's not completely silly.”

Bemis also included a brand new song to download with each issue.

Self-confessed comic book nerd and Anthrax guitarist Scott Ian joined forces with artist Sam Kieth for a two-part revenge story featuring Lobo, an alien bounty hunter who made his first appearance in a 1983 issue of DC Comics’ Omega Men. In Lobo: Highway To Hell, the titular character coming face to face with a very grumpy Satan. “Obviously, I don't just commit murder when I don't like something, but I understand Lobo's attitude very well, having been in a metal band almost my whole life,” Scott told Wired. “And I thought that writing it was going to be hard, but it felt more natural writing Lobo's dialogue than lyrics.”

We dread to think how many comic books the Coheed And Cambria frontman owns. We blame the parents, actually. “I think my comic-book origins story started with kiddie clothes,” he told Twin Cities Geek. “I remember a picture of my brother and I when we were toddlers, I think I was wearing an Incredible Hulk shirt and he was wearing a Superman shirt. I think my dad had an interest in it and they bought a shirt and put it on us, so that’s kind of the beginning.” He began releasing his own titles in 2000, beginning with The Bag.On.Line Adventures. He now owns Evil Ink Comics, who’ve released titles including The Amory Wars, Kill Audio, Key Of Z, Translucid and Good Apollo, I'm Burning Star IV, Volume One: From Fear Through the Eyes of Madness. Try saying that after a pint.

Last year, the Black Veil Brides vocalist released a solo album and graphic novel titled The Ghost Of Ohio. The story – which takes place over a 100-year period – follows the ghost of a young man who returns to southern Ohio after being put to death for a crime he didn’t commit. “I can’t even begin to describe to you how excited I am to get to work with everyone at Z2 Comics to bring this story to life,” said Andy at the time. Co-written by Scott Tuft and illustrated by Eryk Donovan, the comic book was released last spring.