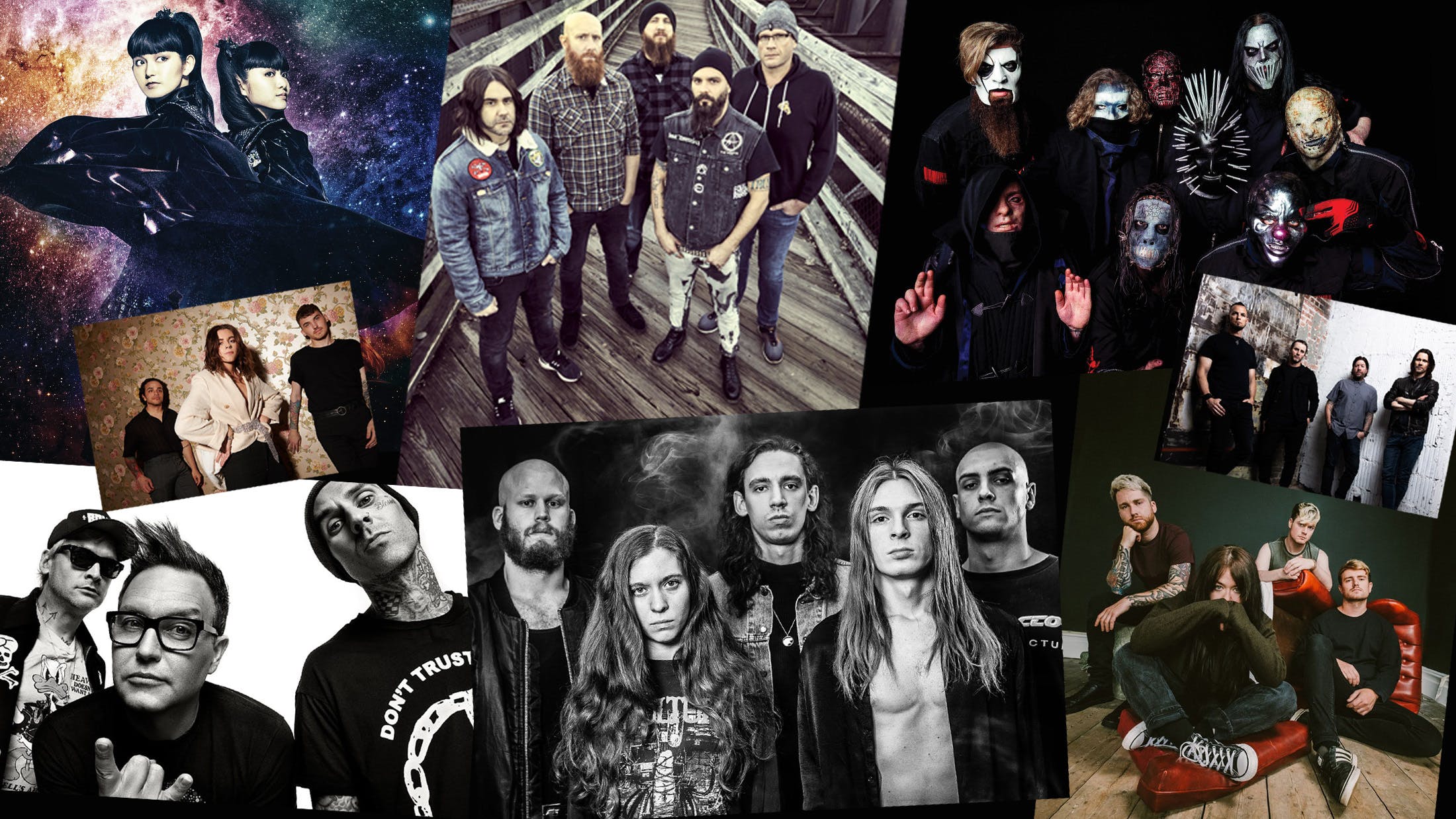 Even though the summer is in full swing, it may shock you to learn that there’s only 162 days until Christmas. 169 days until 2020. Where does the time go? Seriously. If you’re a scientist, do write in.

With less that six months left on the 2019 calendar, it’s only right and proper that we do a round up of some of the major releases headed our way. This post is fuelled by fact and a soupçon of fevered speculation.

This week’s cover stars recently released the single Death Of Me, their first new material in two years. The song is taken from the Massachusetts elec-trio’s as-yet-untitled follow-up to All We Know Of Heaven, All We Need Of Hell, marking their debut for new label Reprise/Warners. While a release date is unconfirmed, we wouldn’t be surprised if their third full-length will emerge towards the end of their summer tour, which concludes at the Music Hall of Williamsburg in Brooklyn, New York. Expect infectious anthems with a Pantone 19-0303 TCX underbelly. That’s ‘jet black’, if you’re not au fait with the colour code.

Ever since a keen-eyed fan caught sight of vocalist Brian Johnson and estranged drummer Phil Rudd outside The Warehouse Studio in Vancouver last summer, we’ve been waiting for some solid news about what the Australian rockers have got planned. In the spring, AC/DC engineer and mixer Mike Fraser revealed the band have been working on “something” – thanks for that – while there are rumours abound their follow-up to 2014’s Rock Or Bust will feature recordings made by the late Malcolm Young. Last week, it was rumoured that the band will be announcing details of a world tour very soon. Whatever they’re working on, just expect a slew of dirty blues riffs, back up by Brian’s Geordie rasp.

In the three years since METAL RESISTANCE, these Japanese kawaii metallers have grown into global superstars. METAL GALAXY – BABYMETAL's third album, due October 11 – looks set to further cement that reputation. “The album is going to be a new evolution of kawaii metal – it involves a mixture of different types of music,” says MOAMETAL. Several songs have been released in advance so far – including Distortion, Starlight, Elevator Girl and PA PA YA!!, the latter featuring a Thai rapper F. Hero – but we don't know which ones will feature on the official tracklist…

The Florida four-piece are set to release their new album, Walk The Sky, on October 18. With guitarist Mark Tremonti and frontman Myles Kennedy from recording and touring in support of their recent solo albums, it seems the pair have returned to the band invigorated and eager to explore new sounds on their sixth full-length, including an “old school synth-wave kind of vibe”. “It’s hard to completely get away from who we are – the same four guys in the band – but everyone who’s heard the record says it has its own personality and doesn’t sound like any particular Alter Bridge record,” Mark tells Kerrang!. “But that being said, it’s familiar Alter Bridge territory, and Myles has said it’s kind of the answer to AB III. That was a very brooding and dark lyrical record, whereas this one is the yang to the yin of that. AB III was kind of about a loss of faith and not believing, Myles was having a dark moment in that time and he wrote the majority of the lyrics. This is more of an enlightening, Zen kind of record – it’s not a preachy record by any means, it’s more of a free-spirited kind of thing.”

It’s finally happening, people. On August 30, Tool will release their first album since 2006’s 10,000 Days. What do we know so far? It sounds “epic, majestic, symphonic, brutal, beautiful, tribal, mysterious, deep, sexy and very Tool”, according to Prophets Of Rage guitarist Tom Morello. And, as there are no guarantees when it comes to Tool, we’ll say that the as-yet-untitled album will probably feature the songs Invincible and Descending, which the band performed during their recent Download headline set. And that’s it. We’ll just have to wait a little while longer.

Earlier this year, Ice-T announced that the band had started work on their seventh studio album, Carnivore. And according to the Body Count frontman, it’ll be their most brutal offering yet. Lofty claims for a band who got into hot water for their 1992 track Cop Killer. “When we did Manslaughter it had been 20 years and I wanted to see if we had a fanbase… and we did,” he says. “We outdid Manslaughter with Bloodlust, and the posse grew. Now we’ve got to outdo Bloodlust. That’s our only goal. Not to make the greatest rock album in history, it's just to outdo Bloodlust.”

Mark, Matt and Travis’ follow-up to 2016’s California was due for a June release, but as we hurtle headfirst into August, it’s looking likely that their eighth full-length will emerge in the late summer or in the autumn (Google it, America). The album was done, by all accounts, but blink-182 hit a creative streak in the studio and, like a dad at a barbecue, kept adding bangers to the pile. Three songs have been released thus far: Blame It On My Youth, Happy Days and the sub-minute punk blast Generational Divide. And as for the title, the band are toying with BOJMIR – you can read that one backwards, if you like – or Pretty Nuts, which could imply craziness or a pair of fetching testicles.

These Pittsburgh GRAMMY nominees are currently working on their follow-up to 2017 album Forever. As such, Code Orange have felt it necessary to abandon their European festival run in order to complete it. “We have been working non stop to avoid cancelling but it's no longer possible,” read a statement from the band. “As always, the art is priority number one. We will make it up. Thanks for understanding.” According to drummer Jami Morgan, the band will be expanding on the crushing sound of their previous album. “We're going to take those things farther and farther,” he told Revolver earlier this year. “That’s what we'll keep doing until it's stretched so far that it breaks.” No ballads, then.

The Bakersfield nu-metal icons will release The Nothing in September. Written and recorded following the tragic death of frontman Jonathan Davis’ wife Deven, this will undoubtedly be Korn's most emotionally raw album to date. “I went through working with a producer, different engineers and shit, and I finally got fed up,” said Davis. “I’m like, ‘Fuck you all, just leave me alone; when it’s done it’s done and I’ll give you it.’ So it was just me and an engineer. I did it myself and it was a very cathartic, dark experience.”

The Swedish prog-metal maestros will release their new album, In Cauda Venenum, in the autumn. And as a special treat for their bilingual fans, practiced in both English and Svenska, they’ve recorded it in both languages. Recorded at Stockholm’s Park Studios in 2018, guitarist Fredrik Åkesson told Face Culture that the new Opeth material will be, “more complex, more energetic” than their previous three albums. Look out for that in late September, and in the meantime, listen to Heart In Hand and its Scandinavian version Hjärtat Vet Vad Handen Gör now.

With two EPs and a Best British Breakthrough Kerrang! Award to their name, this South Wales post-hardcore quartet have been working on their debut album with producer Dan Weller (Enter Shikari). Ahead of their recent appearance at the 2000trees festival in Gloucestershire, Dream State released the single Primose, and while an album release date has not been disclosed, the smart money would be on it coinciding with their headline tour in October. But what do we know? We’re still recovering from the blink-182 album working titles. Absolute filth.

The Massachusetts quintet have been busy of late recording their new album Atonement, and touring Europe as Iron Maiden’s special guests during last year’s summer run on The Legacy Of The Beast tour. The album – their eighth studio release, and their follow-up to Incarnate – will feature guest contributions from Testament’s Chuck Billy and former Killswitch Engage vocalist Howard Jones. “The song itself is about unity,” says frontman Jesse Leach of The Signal Fire in an interview with United Rock Nations. “It's about solidarity; it's about standing with each other and calling out for help and fighting the fight side by side. I feel there is something for everyone on this [album]. It captures the wide range of styles and topics that are part of our history as a band as well as pushing things just a touch.” Look out for it in August though Metal Blade.

We’re just a few weeks away from the release of We Are Not Your Kind, the Iowan nonet’s sixth studio album. Produced by the band themselves along with Greg Fidelman (Metallica), the album will feature 14 tracks, including the single Unsainted. Teaser track All Out Life, which was released on Halloween of last year, will not appear on the album. Will it match Slipknot's faultless back catalogue? It looks that way, if frontman Corey Taylor’s interview with Radio 1 Rock Show presenter Daniel P. Carter is anything to go by. “It’s probably the furthest we’ve pushed the boundaries of creativity and experimentation, while also not losing our identity,” said Corey. “We not only went places that we’ve hinted at musically over the years, but never really went full-board, but we’re also doing heavier things than we’ve ever done.” Just 25 days to go. Brace yourselves.