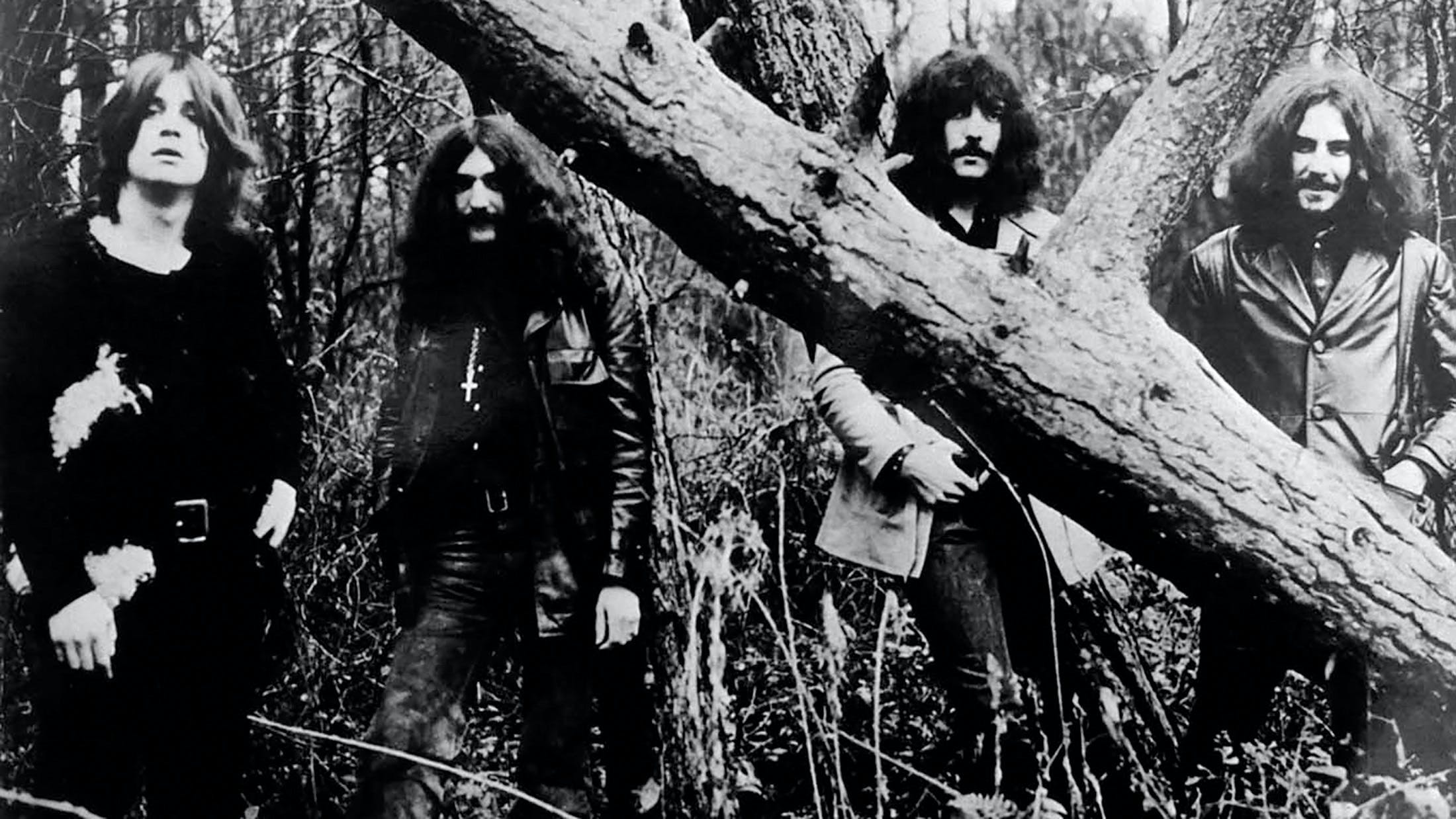 Okay, so the shortlist of all the bands who wouldn’t be here without Black Sabbath would simply read, ‘All of them’. At least if you listen to music of the heavy variety. As the band who came up with the blueprint for metal as we know it, Sabbath have an enduring legacy that runs through pretty much every band of the increasingly multifaceted genre – and many more besides.

Some bands owe them more than most, though. Whether it’s an unmistakeable, riff-driven approach, familiar doom-laden sonics or some other undeniable influence, these are just a few of the bands who definitely wouldn’t be here without Black Sabbath.

Black Sabbath were never just about the big riffs and, despite their very name, any obsession with the occult was quite short-lived. It was, though, their very sense of bravery and adventure that appealed to Ghost mastermind Tobias Forge. “Black Sabbath have been massively influential on Ghost. When I was a little ghoul they were one of the first heavy bands I started listening to,” he told us in 2017, in the guise of a Nameless Ghoul. "Even on the albums regarded as heavy metal classics you have these mournful ballads with just a piano and a Mellotron. There’s a lot of keyboards, orchestral stuff, a lot of straight rock'n'roll and we wanted to channel that into Ghost, rather than just copying the riffs from Children Of The Grave or Symptom Of The Universe.”

Noise-drenched oddballs Melvins were one of Kurt Cobain’s favourite bands (although they did have to fire him as a producer on their Houdini album as he was so out of it). They were a massive influence on grunge, sludge and alt.rock but one of their own primary influences was the mighty Sabbath. As if to prove the point, they recently cut an EP called Sabbath, featuring Sleep’s Al Cisneros, covering Black Sabbath and Sabbath Bloody Sabbath. And you don’t get much more Sabbath-y than that.

As with sludge metal, we could have picked any of the ’80s-and-beyond doom metal set but we’ll stick with just a couple of the most influential. Saint Vitus actually formed in 1979 under the name Tyrant but changed their name in honour of the Sabbs song St. Vitus Dance. Scott ‘Wino’ Weinreich joined them in the mid-’80s in time for arguably their finest album, Born Too Late. The second show he ever went to was Sabbath on their Paranoid tour, and he told Brooklyn Vegan last month: “I can still tell you what Ozzy was wearing - black velvet bloomers, calf high black boots and a red and black dashiki.” Asked to name his main influences, he answered: “Any of the first three Black Sabbath records were heavily influential on all my musical creations from then until now. Let's count them as one.”

Swedes Candlemass came a little later, but their 1986 classic Epicus Doomicus Metallicus was another hugely influential doom metal milestone. It all stems from the masters though and there are plenty of connections to unpick. Candlemass have recorded their own Sabbath Medley (originally a bonus track on ’88 album Ancient Dreams) and Tony Iommi made a guest appearance on their fabulously titled Astorolus - The Great Octopus on The Door To Doom last year. But basically, just dip anywhere into their catalogue and the lineage is obvious.

The sonic similarities might be there for all to see in doom metal, but Sabbath have also influenced more surprising acts – including rap-metal pioneers Body Count. As Ice-T told us in a recent interview in which he answered questions submitted by fans, he was there from the very start. Asked which band first got him into metal, he said: “I started to like Blue Öyster Cult and Deep Purple and I was really into Black Sabbath. I actually bought the first Black Sabbath album and kept it on repeat, so I’ve got to say Sabbath. And a lot of people say Black Sabbath invented heavy metal, so I guess I was there at the beginning.”

When Down came together as a slab-heavy supergroup, one of the things that drew together members of Pantera, Crowbar, Corrosion Of Conformity and Eyehategod was a shared love of Sabbath. ‘Your trust is in whisky, weed and Black Sabbath,’ Phil Anselmo had previously bellowed on Pantera’s Goddamn Electric and he took that sentiment with him into what was originally a side-project. Take one waft of the pungent Bury Me In Smoke or listen to the riff-heavy Witchtripper and the influence is unmistakeable.

Sabbath were a huge influence on the whole NOLA sludge metal scene. “Jimmy [Bower] used to pick me up for band rehearsal and we would listen to the Melvins’ first two records and Carnivore’s Retaliation and some Sabbath and that’s all we would listen to,” Down/Crowbar guitarist Kirk Windstein told Kerrang! of the scene’s early days. Legendary drummer Bower was a founder member of Eyehategod, Crowbar, Down and Superjoint Ritual. We could pick anyone from those or a dozen others, but we’ll go with Eyehategod purely for the raw, misanthropic edge they brought. Check out their Sabbath Jam from the tribute series In These Black Days Volume 1 for a lesson in how to own your Sabbath covers.

Ozzy’s solo output tends to have a very different feel to Black Sabbath’s, but you can’t be his six-string wingman for all those years – playing Sabbath standards live as you go – without picking a few things up. Zakk Wylde’s own band Black Label Society incorporate a lot of Sabbath groove into their beardy biker metal, and Zakk himself is such a fan that he also has a tribute project called Zakk Sabbath.

Zakk isn’t the only one to have his own fully-fledged Black Sabbath tribute act as Cancer Bats have also toured and put out an EP (2013’s splendid Bat Sabbath – Bastards of Reality) under the name Bat Sabbath. The influence can also be frequently felt in the band’s own sludgy riff-driven compositions, proving that Sabbath’s icy grip also extends to the more hardcore side of the heavy spectrum.

LA’s Black Flag produced one of the first – and certainly the most pivotal – clash of hardcore aggression and Sabbath-inspired sludge on the second half of 1984’s My War. Although considered seminal and hugely influential in its own right now, the release divided opinion and drew as much hate as love at the time – which was probably the point. Introducing Sabbath for their reunion announcement in 2011, former Black Flag frontman Henry Rollins said, “When I heard Black Sabbath, I realised my life had a soundtrack.”

Baroness might have a wide and varied sonic palette but the Sabbath effect is still plainly audible in that riff-driven, fuzzed-out heart. Mainman John Dyer Baizley told Kerrang! that Paranoid was the first song he ever learned to play. He said: “I think [my guitar teacher] saw in me that I was going to be one of these punk kids, so he showed me a riff that I could play by a band with an element of danger to them. I’m eternally grateful for that. Learning how to play power chords was a big deal for me. When you realise you can play power chords, you know you can play music.”

Their very name is an amalgam of two Black Sabbath songs (Electric Funeral and The Wizard) while their last album Wizard Bloody Wizard was very much a tribute to Sabbath Bloody Sabbath. The Dorset doom masters have never been shy about their worship of the Brummie legends. “Sabbath has always been our first influence and probably our main influence as a British band… working-class band that started from nothing,” frontman Jus Osborn told Revolver, but Electric Wizard put their own twisted spin on things, taking the basic riff-heavy blueprint to uglier, heavier places.

Metallica have cited a lot of bands without whom they wouldn't be here, but Black Sabbath are always foremost on the list. Many of these were represented on the two Garage… EPs, with Sabbath’s Sabbra Cadabra getting the covers treatment on Garage Inc. The US titans – who arguably took Sabbath’s mantle as the single most influential metal band of the '80s and beyond – have also tackled numerous Sabbs songs live, including Hole In The Sky and Iron Man when they had the honour of inducting Sabbath into the Rock & Roll Hall Of Fame. “Bill, Geezer, Ozzy and Tony, if it weren’t for you, we wouldn’t be here,” Lars Ulrich said in their speech. “Obviously if there was no Black Sabbath, there would be no Metallica. If there was no Black Sabbath, hard rock and heavy metal as we know it today would look, sound and be shaped very, very differently. So if there was no Black Sabbath, I could possibly still be a morning newspaper delivery boy.”