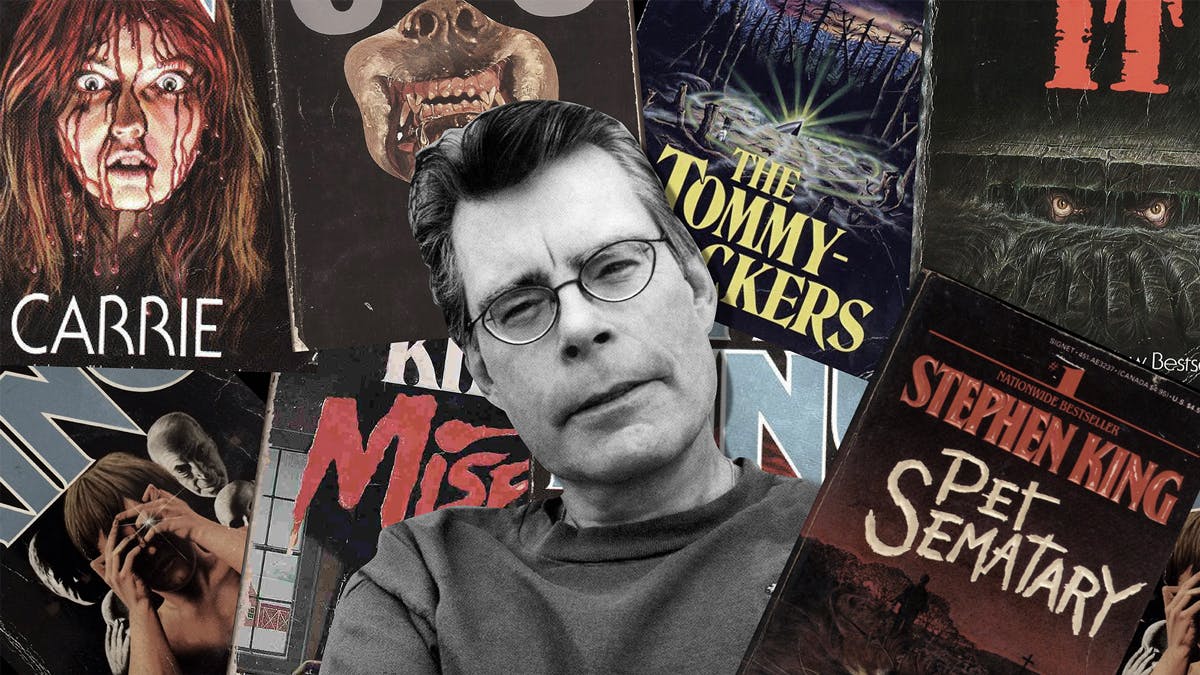 Have you seen the new Pet Semetary movie yet? Sometimes dead is better, but this is one remake that was worth digging up.

Stephen King’s books haven’t always been translated so well to celluloid, but his written word has been probing the darker recesses of the human mind for decades. Carrie, his first published novel, came out 45 years ago today and he’s been inspiring nightmares and dreamscapes ever since.

He’s also inspired a lot of rock and metal bands, which is apt because King is a bit of a rocker himself. He’s professed his love for the likes of AC/DC, Metallica and Anthrax and frequently references bands and lyrics from the heavier side in his books.

Here, then are 13 tracks based on or inspired by the works of the master of horror…

The first film version of Pet Semetary came out in 1989 and the Ramones were recruited to write the theme song. The movie’s director, Mary Lambert, was a good friend of bassist Dee Dee Ramone, and knowing that the punk legends were one of King’s favourite bands, pitched the idea to them. Dee Dee reportedly wrote the lyrics in a couple of hours, having speed-read the book and the result was one of the Ramones’ most commercially successful tracks.

We could have made a reasonable list based on Anthrax songs alone. A Skeleton In The Closet is based on the short story Apt Pupil, Misery Loves Company on Misery and Breathing Lightning on the Dark Tower series, but it’s the title track to the thrash kings’ immense breakthrough album Among The Living that really stands out - both the song and the album artwork were inspired by The Stand and its antagonist Randall Flagg. Anthrax guitarist Scott Ian is a huge Stephen King nerd with an extensive collection of rare books and once got to write the foreword for a later edition of The Stand.

Songs based on horror books and films have basically become Ice Nine Kills’ thing, so there was always likely to be some Stephen King in there. Enjoy Your Slay was from an album built around the film and was inspired by the movie version of The Shining. It even featured Sam Kubrick, grandson of director Stanley, but Hell In The Hallways went straight to the source material for their drilling metalcore take on Carrie.

Metallica have always taken inspiration from literary sources. One was based on the book (and film) Johnny Got His Gun and on Ride The Lightning alone they touched on Ernest Hemingway (For Whom The Bell Tolls), H.P. Lovecraft (Call of Ktulu)… and Stephen King. Perhaps predictably, it was horror nut Kirk Hammett who came up with the concept, which was again lifted from The Stand. "There was this one passage where this guy was on death row said he was waiting to 'ride the lightning,'" the guitarist told Rolling Stone. "I remember thinking, 'Wow, what a great song title.' I told James, and it ended up being a song and the album title."

Okay, so this one is actually a cover. Check out Colleen Green’s version for a dreamy electro-pop song using a big scary dog as a metaphor for heartbreak trying to batter its way into the locked car of your emotions. Or stick with JEFF The Brotherhood for an awesomely riffed-up garage-punk version with more bite and a nicely rabid snarl.

Ash always seemed to be more obsessed with Star Wars than horror, but their first single took inspiration from The Talisman, a dark fantasy book King wrote with Peter Straub. Frontman and songwriter Tim Wheeler said on the Ash website: “I think I’d bought it in a school jumble sale and I was into any Stephen King book I could get at the time. There’s a chapter called ‘Jack names the planets’ and it leapt out as a song title to me, and I wrote the song. It’s a bit of a hybrid of what was going on in my life – romance and love for the first time – and the story of the book.”

Pennywise pretty much defined a certain SoCal skate-punk sound in the mid-’90s. They were generally to be found singing about fallen brothers and raging against the machine, but they were also named after a certain gutter-dwelling clown and wrote a song about him (sorry, IT) on their self-titled debut album. To be absolutely honest Pennywise off Pennywise by Pennywise is not their absolute pinnacle, but it gallops along at a fair whack with couplets like, ‘Evil lurks in his eyes / The clown they call Pennywise.’

After making his own directorial debut with camp comedy-horror Maximum Overdrive (based loosely on one of his own short stories), King presumably learned it’s not always as easy as it looks. The trashy tale of machines springing to homicidal life earned him a Golden Raspberry nomination for Worst Director, but at least the film had a stonking soundtrack by King’s favourite band AC/DC. The Who Made Who album featured three new tracks written specially for the movie, including this typically stomping title-track.

The Tony Martin era is generally not seen as Black Sabbath’s finest, but it did produce some gems, including this introduction to the band’s then new singer. There’s a classic Tony Iommi riff at play and an epic feel, albeit softened by the keyboards and that mercilessly buffed ’80s production. And yes, it’s inspired by Stephen King’s The Shining, which might be why it’s a little overlooked. The Overlook Hotel, get it? Oh, never mind.

Dark fantasy literary influences? Check. Big, bombastic riffs and a huge symphonic sweep? Oh yes? The sheer scale of King’s Dark Tower saga is perfect fodder for Nightwish and they give it the full treatment here. 7 Days To The Wolves is inspired by The Dark Tower V: Wolves Of The Calla, which was itself influenced by Seven Samurai and its Western remake The Magnificent Seven, with a dash of Star Wars and Harry Potter thrown in for good measure.

This is more a case of ‘taking inspiration from’ than ‘written about’ but you can certainly equate the emotional vampirism with Pennywise the fear-sucking clown from IT. ‘Starved for attention that alone wouldn't fill you up / So you feed on the weak and you drink up their blood / But someday they'll turn on you,’ they sing, merrily. Serendipitously, Four Year Strong released their odds'n'sods compilation Some of You Will Like This, Some of You Won't, featuring an acoustic remake of the song on the same day the IT reboot came out. There’s cotton candy, and rides, and all sorts of surprises down here.

Testament, Disciples Of The Watch (1988)

Murderous children, warped religion and a demonic fertility spirit who lurks behind the crops – if Stephen King short story Children Of The Corn is not perfect fodder for late-’80s thrash, we don’t know what is. This choice cut from Testament’s second album features a suitably spooky building intro before exploding into a huge chug'n'thrash anthem. It still frequently makes their setlist today.

We’ll wrap things up with perhaps the only metal musician more obsessed with King than Anthrax’s Scott Ian – Blind Guardian frontman Hansi Kürsch. His Demons And Wizards side project is particularly preoccupied with the Dark Tower series, but main band Blind Guardian have also dabbled in the Dark Side. Guardian Of The Blind is based on IT, but we’ll go for Tommyknockers, simply because it’s a more obscure book and BG manage to incorporate its creepy children’s rhyme into a blazing ball of power metal goodness.