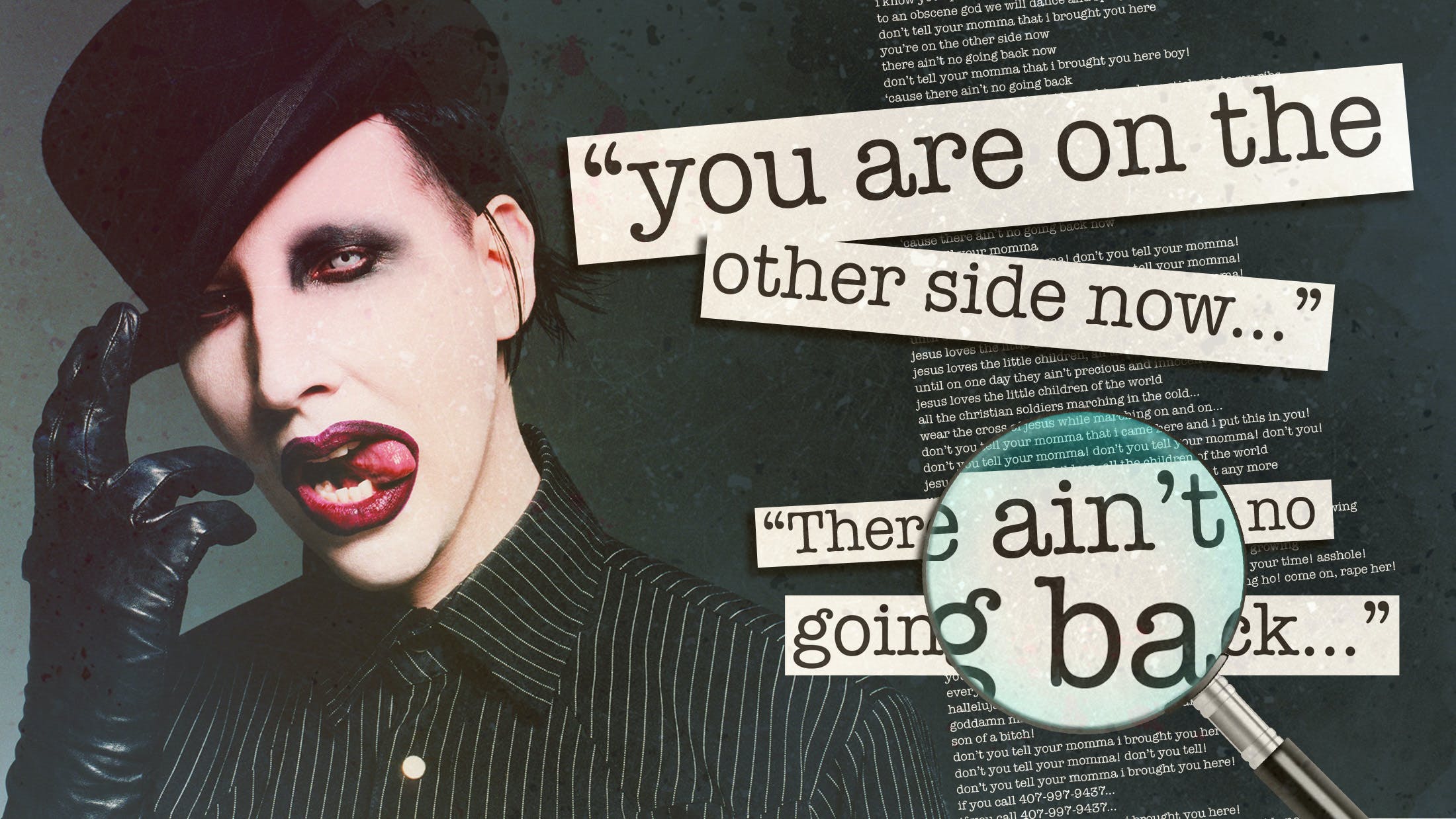 The phenomenon of subliminal messages hidden deep inside songs is not exclusive to hard rock and metal. The Beatles pioneered the practice of ‘backmasking’ (layering-in vocals on tapes played backwards) in popular music and hid signposts right throughout 1966’s Revolver and 1967’s Sgt. Pepper’s Lonely Hearts Club. Jimmy Hendrix opened Electric Ladyland with them on And The Gods Made Love. Country rockers The Eagles even jammed them into their 1976 anthem Hotel California, gasping away that 'Satan had ‘em; he organised his own religion…'

The sheer insidiousness of these sounds, however – that sense of almost-occult subversion that comes with smuggling dark motifs within your art – has always found a place within heavier music, from Steve Vai to Iron Maiden to Slipknot. It’s caused many a stir, too, never less than where in 1980 the Metal Gods themselves, Judas Priest, found themselves on trial for purportedly hiding messages like ‘try suicide’, ‘do it’ and ‘let’s be dead’ in their cover of Spooky Tooth’s Better By You, Better Than Me, inciting a pair of young men from Nevada to kill themselves. The Brummie legends were acquitted, of course, but despite frontman Rob Halford’s simple explanation - “When you’re composing songs, you’re always looking for new ideas, new sounds…” – the dark power of those subconscious whisperings have only grown in infamy.

It’s right there in the title for this banger from Mindless Self Indulgence. 'Play that record backwards', rages frontman Jimmy Urine. 'Here’s a message, yo, for the suckas: and go fuck yourself'. He’s actually calling out the absurd angsty self-indulgence of miserabilist youths with the time and inclination to sit around listening for these backwards sounds. The second half of the song falls apart in a slew of flipped-over slogans: 'Respect your parents!' 'Clean your room!' 'Who needs me to suck their dick?!' 'Don’t listen to this song…' Then the song rotated the right way round again to forthrightly demand 'Hate and devour the young. And the weaker ones, don’t forget the guns. You’re gonna’ need them to kill yourself!' Clever, but so dark.

As mentioned in our intro, Judas Priest had more than their fair share of trouble with subliminal messages that weren’t really there. That doesn’t mean that they weren’t masters of innovation who did bung a bunch of them into their other compositions, of course. This classic from 1984’s knowingly titled Defenders Of The Faith – released four years after they were actual defendants – might just mark their greatest use. A creepy-crawly pounder with vampiric intent, it eventually subsides into all-out spooky weirdness with Rob smuggling in the mantra: 'In the dead of night, love bites!'

Twenty One Pilots – Nico And The Niners

Combining reggae, rap-rock, trip-hop and outright psychedelia, the backwards messages contained in this single from Ohioan duo twenty one pilots’ fifth LP Trench feel like just the cherry on top. 'Renounce vitalism', instructs a warped voice as the song comes to life. 'You will leave Dema and head True East. We are banditos…' Tying into the album’s overarching conceptual arc, it is a fascinatingly different use of the backmasking technique, harnessing its potential within the already scratched-and-slid hip-hop musicality of twenty one pilots and trafficking in a statement that’s of real relevance to the narrative unfolding around it.

Darkthrone – As Flittermice As Satan’s Spys

You want evil? Darkthrone gives you evil. This scourging cut from the Norwegians’ 1994 masterpiece Transilvanian Hunger is probably the closest anyone’s ever gotten to what anxious parents and hand-wringing social conservatives imagine when worrymongers spin a story about Satanic messages hidden in heavy metal. 'In the name of God, let the churches burn…' declares a devilish, distorted voice amidst the sonic maelstrom. In the wake of the infamous ‘Black Circle’ church-burnings, it probably was a bit naughty, to be fair. But nowadays it feels like just another gleeful pantomime excess from black metal’s murkily OTT past.

Sure, legendary London prog rockers Pink Floyd feel like something of a lightweight inclusion on this list, but the eighth track from their 1979 rock opera The Wall might just have the greatest subliminal message of them all. 'Hello, Looker. Congratulations. You’ve just discovered the secret message. Please send your answer to Old Pink, care of the funny farm, Chalfont'. Many listeners believe this is a reference to former vocalist Syd Barrett, who’d suffered a breakdown some years before. Regardless, it stands apart for its sheer audacity.

Motörhead weren’t exactly arty-farty types known for fucking about with their raw, aggressive rock‘n’roll swagger. This deep cut from 1991’s 1916 – something of a WWI concept album – features generous backmasking throughout, evoking the feeling of being caught in a cloud of mustard gas. 'Now tell me about your miserable little lives', whispers Lemmy, like a scarier-sounding Freddy Krueger. 'I do not subscribe to your superstitious, narrow-minded flights of paranoia. I, and people like me, will always prevail…' Coupled with the woozy, synth-laden musicality of the wider song, it works brilliantly. According to many fans, it’s a (not so) veiled message to infamous American censorship organisation the Parents’ Music Resource Centre, too.

It’s hardly surprising that walking controversy-magnet Marilyn Manson has experimented gleefully with backmasking and skin-crawling hidden motifs. Tourniquet, the second single off 1996’s landmark Antichrist Superstar might feature the more instantly recognisable use of the technique ('This is my lowest point of vulnerability…') but Revelation 9, the nightmarish B-side to 1994’s Get Your Gunn layers it on with a breathtaking lack of subtlety as messages like 'You are on the other side now…' and 'There ain’t no going back…' filter through in deepest black.

Recorded as a creative seed for the sessions that would go on to become third Linkin Park album Minutes To Midnight, and with the words of its title placed mischievously in reverse order, it feels only right that this spiralling intro to The LP Underground 6 comes with its message equally upside down. Rather than inciting listeners to evil acts or any kind of self-imperilment, however, the Californians characteristically espouse good hygiene and self-care, instead: 'You should brush your teeth, and you should wash your hands…' Indeed you should.

Darkthrone give you evil, sure. But who’s the evillest band of all? Slayer? SLAYEEEUUUURRRGGHHHH! Opening their furious second LP, we get over a minute of backmasking, with a mob of demonic voices declaring 'Join us!' before their leader growls his malevolent 'Welcome back!' Fitting perfectly with the uncompromising sonic violence and almost-OTT End Of Days imagery they were benchmarking back in 1985, it endures as an unforgettable, spine-tingling sonic motif over three decades later even as the band are preparing to call it a day.

The devil doesn’t always come off well digging into the details of these songs. Seattle icons Soundgarden might’ve more often layered their absurdist imagery on feelings of miserabilism and desolation, but 665 (yep, one short of The Number Of The Beast) arrives with far more playful good humour. A switcheroo of letters on the third track on the grungers’ excellent 1988 debut sees them paying hilarious homage to the Christmas spirit rather than the Prince Of Darkness throughout: 'Santa, I love you baby. My Christmas king. Santa, you’re my king. I love you, Santa baby. Got what I need…' Hail Santa, indeed.

The Used – Cut Up Angels

Alongside My Chemical Romance’s Three Cheers For Sweet Revenge, The Used’s 2004 high-watermark In Love And Death helped to benchmark the new wave of dark, gothic emo. Where Gerard Way always – at least on some level – managed to main a sense of heroic optimism, his counterpart (and close friend at the time) Bert McCracken was prone to far more nihilistic flights of fancy. Although the ambient fairground sounds and twisted, upbeat musicality of this absolute tune mask the heartbreak at its centre, the 'Happiness is a warm gun, yes it is…' message in the intro reveals the real ferocity at its heart.

Four years after his Birmingham brethren in Judas Priest had escaped theirs, Ozzy Osbourne found himself at the centre of his own lawsuit where it was alleged that the ‘hidden messages’ on his 1980 track Suicide Solution (actually misunderstood allusions to alcoholism) were ‘proximate causes’ for Californian teen John Daniel McCollum taking his own life. Never a character to take such accusations lying down, he shoved back on 1988’s No Rest For The Wicked, with a real hidden message. Rather than anything meaningful, of course, it was a gag, reimagining iconic The Exorcist one-liner 'Your mother sucks cocks in hell…' as 'Your mother sells whelks in Hull…' You can take the lad out of The Midlands, and all that…