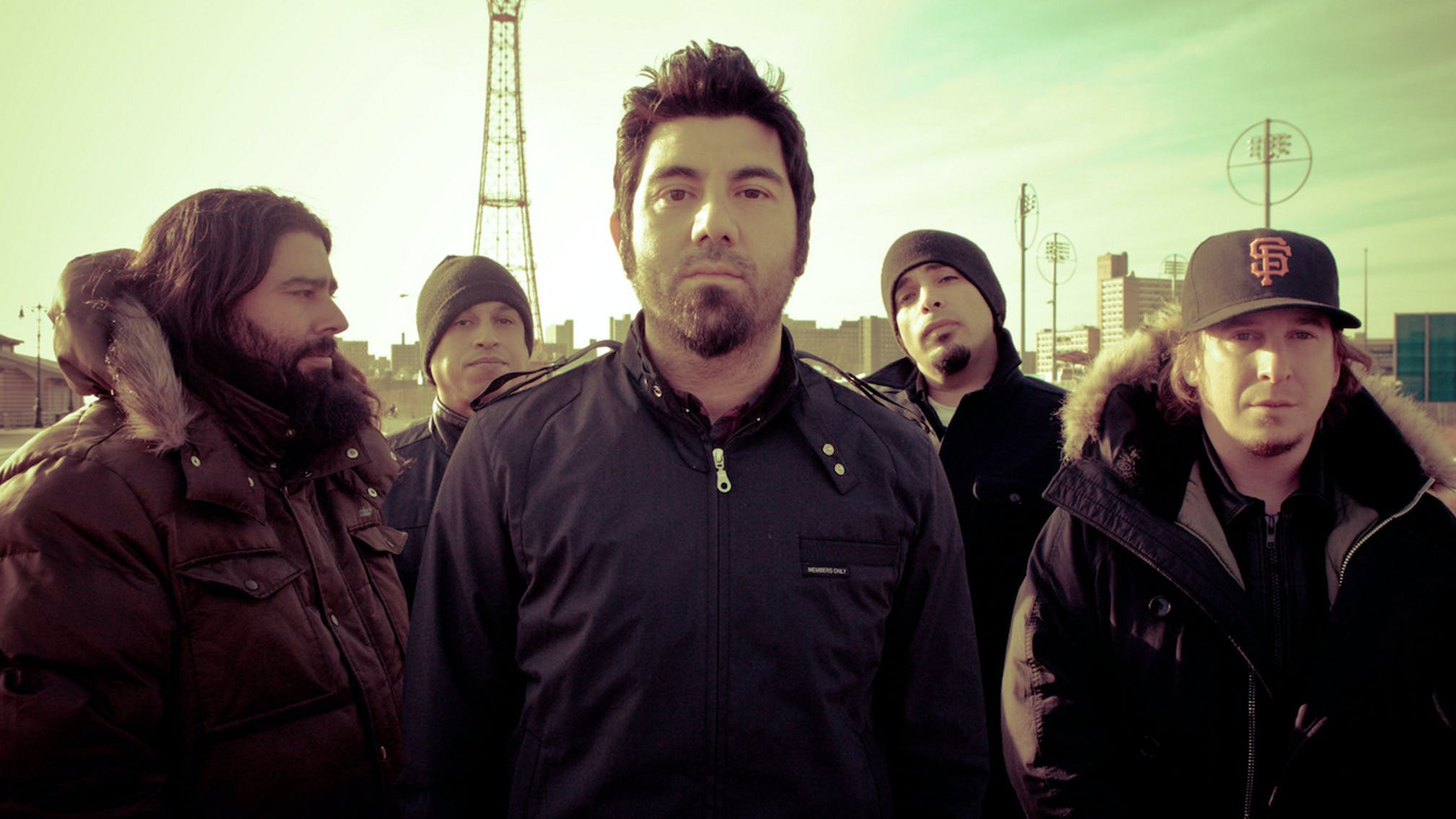 At the end of the 1990s, Deftones had learned to trust themselves. After releasing debut album Adrenaline and follow-up Around The Fur, they saw the culture of complaint and stupidity in mainstream rock, and decided not to follow.

They didn't necessarily know what they wanted to do, but with White Pony, they followed their shared instincts towards textures and exploration, ending up with a record that's occasionally still called 'the Kid A of metal'. Now, 20 years later, the album is being celebrated with an anniversary reissue, which includes all-new music too!

"I was probably 26 years old when when we recorded White Pony," says Chino Moreno. "Pretty young and full of life. That record pretty much mirrors that time. We were pretty wild. We spent half the time working in Sausalito, living on houseboats out there. Every day was pretty much an adventure."

Chino, along with Abe and Frank Delgado have just held a global press conference to reflect on the White Pony era and upcoming reissue. Here are 13 things we learned…

The White Pony Reissue Comes With A Full Remix Album

"We're going to do a sort of flipside entitled Black Stallion," says Chino. "A lot of people are on it – some that inspired the writing on the original record itself. We had that idea pretty much 20 years ago, even before we started writing White Pony. It's something we always joked about, and now it's actually come to life."

One of the remixers includes hip-hop innovator DJ Shadow, stemming from a chance meeting at the Cattle Club in the earliest days of the band. "I was actually opening as a DJ," says Frank. "Me and Chino kind of cornered Shadow, like, 'Hey man, what's up? We're the Deftones and we want you to remix our record!' He looked at us like we were crazy, like, Deftones? Are you guys ska? Alright, send it to me. We were like, well, we haven't actually written or recorded it yet. But it's funny, because now, he's involved in it."

Passenger Started With A Speeding Ticket From The Cops

Maynard James Keenan of Tool was involved in White Pony early on, offering casual input and ultimately singing alongside Chino on Passenger. "I don't want to say he was like an 'executive producer' or anything," says Chino. "But he was in the room with us and would chime in. A Perfect Circle was playing a show, and I drove Maynard from Sacramento to San Francisco because they had a show there the next day. We got pulled over by the cops on the freeway – we were just speeding – and next day he came by the studio. I think Passenger was one of the last songs we did. I still hadn't had any ideas for it yet. We listened to it, and wrote line by line. It's fun to collaborate with somebody of his calibre, and for me as a singer, to trade lines with somebody with this voice was super special."

Maynard's involvement resulted in some unexpected scenes, particularly for Frank and Abe. "I remember Maynard being in the rehearsal studio, and he would bring these bowls that you rub to make tones," says Frank. "We would jam off of that. I always thought that was really cool, how he brought in these things for us to vibe off and jump off."

Abe remembers bowls, but also bottles. "He brought the bowls – and a bunch of champagne. Next door to us was another tiny room, and the Foo Fighters were trying out guitarists. I saw the line of like a hundred people trying out for Foo Fighters, and we're next door when Maynard rolls up with these Tibetan glass bowls going 'Woooo… woooo…' with bunch of champagne. It was great."

White Pony's mesh of aggression and reflection was the combination the band had been looking for, first coming together on Digital Bath. "After we'd left the studio we'd have to take tapes of the rough songs we were working on," says Chino. "At the time, we had this Jeep rental car that we shared when we were in LA. We broke down and had to get a replacement, and they gave us a yellow Mustang 5.0 convertible. It was hideous, but we would drive down Sunset Boulevard to get home every night and I remember playing Digital Bath specifically, bumping it loud in the Mustang with the top down."

The White Pony Reissue Will Have The Definitive Tracklisting

When Deftones turned in the album, it began with the song Feiticeira. But a later track, the bolt-on Back To School (Mini Maggit) became the first song on the tracklist when the album appeared on streaming services. The White Pony reissue will resolve this. "I don't think it's a terrible idea to correct the order on streaming," says Chino. "But at this point in time it kinda is what it is. I still think it's a great record, but when we do the reissue we're definitely going with the original version, mainly because that's what it was intended to be."

Abe Cunningham came into his own on White Pony, developing an approach that had already produced masterful results on earlier tracks like My Own Summer (Shove It) and Around The Fur. "I had these cans, these headphones, made that were gun-silencers. You can actually buy them now, but they were totally isolated. I would have [producer] Terry Date compress the room mikes and I would sit there and just jam. You sound like a god. That sound just enables space in the beats."

White Pony is the first of Deftones' albums to include Chino playing guitar alongside Stephen Carpenter, adding to the tension between the band's metallic attack and textural moments. "It was really experimental because, I mean, I was just sort of learning how to play the guitar," says Chino. "I remember Stef and myself riffing back and forth, and just looking at his hands on his fretboard, figuring stuff out. Initially I don't think the idea was that I was going to actually play on the record. But I remember Stef specifically saying, 'Dude, if you're going to play in practice, then you're going to play on the record.' And I was like, 'Oh, okaaaay… if that's cool with you.' I don't think he was too happy about it, to be honest, then."

The Space Inspired The Songwriting

White Pony was recorded at Larrabee Studios, home to artists like Stevie Wonder and Prince. The rooms specifically allowed the band to explore space, letting sounds ring out and trail without being as compressed and confrontational as Adrenaline or Around The Fur. "At that point, we had a bit of experience in the studio and felt a bit more free," says Abe. "You kind of go in and the history, these rooms… you want to rub your elbow and get a bit of that mojo off the office walls, you know?"

Chino adds that they'd always wanted to have a 'drum-forward' record since the beginning of the band. "If anything, going into make White Pony, that was one of the only ideas that we had," he says. "We wanted to have an expansive-sounding record. Adding Frank to the mix a lot more and the drums to the forefront, I think we added to the dynamic of the record for sure."

Despite tension over competing guitar sounds, Change (In The House Of Flies) ended up becoming a perfect fusion. "I do remember sitting listening to the track being made," says Chino. "The fusion of guitars, the way Terry produced it – and one of my favourite things is Frank's eerie looming tone that comes in and out of the verses. That really took the song into the atmosphere. Change has a lot of elements of what it is that Deftones have always tried to achieve; having the dynamics be at the forefront of our music. It's probably one of my favourite songs of ours. I know it's probably the most popular song, but I think there's a reason for it."

White Pony leaked three weeks ahead of release, which shocked and confused the band. "It was like, 'Leak? What does that mean?'" remembers Abe. "It was a great change in the record industry. Security from that point on went so crazy: watermarks and with all these crazy words and it really screwed up the flow of records. But that was the Napster era."

The earliest days of the internet also brought a measure of distress for Chino. "I remember when chatrooms first started up around that same time, like the early 2000s, and I remember reading the chatroom and people were just like bashing us. A lot of fans were. When people first heard White Pony, they were just like, 'What is this?' We'd just come off Around The Fur, which is a lot more of an aggressive record in some ways. I had to get out there because I was about to cry."

Winning A GRAMMY For Elite Was A Genuine Surprise

One of White Pony's most biting songs, Elite, resulted in a surprise GRAMMY win. The award sits on a shelf in Abe's house to this day, but it was not expected. "Where we were seated in the arena, we were up in the stands," he says. "Everybody that was winning was seated below, on the floor. So we're like, 'Oh, you know, there's no way we're gonna win. We're just happy to be here.' Then they called our name… and we ended up having to jump down over the stands. Security was looking at us like, 'What the hell?!' and it took so long to get up there that by the time we were did, they're like, 'Okay, you got it, you're done.' It was pretty surreal."

Deftones were due to be playing live shows right now, before the coronavirus pandemic. Setlists would have been a mix of everything, but White Pony live shows are not impossible. "When everything shut down a few months back, whatever, we were just getting ready to go to Australia," says Chino. "I wouldn't be against doing a show with the record in its entirety at some point or another. Maybe one day…"

White Pony celebrates its 20th birthday on June 20. A release date for the reissue is yet to be confirmed.