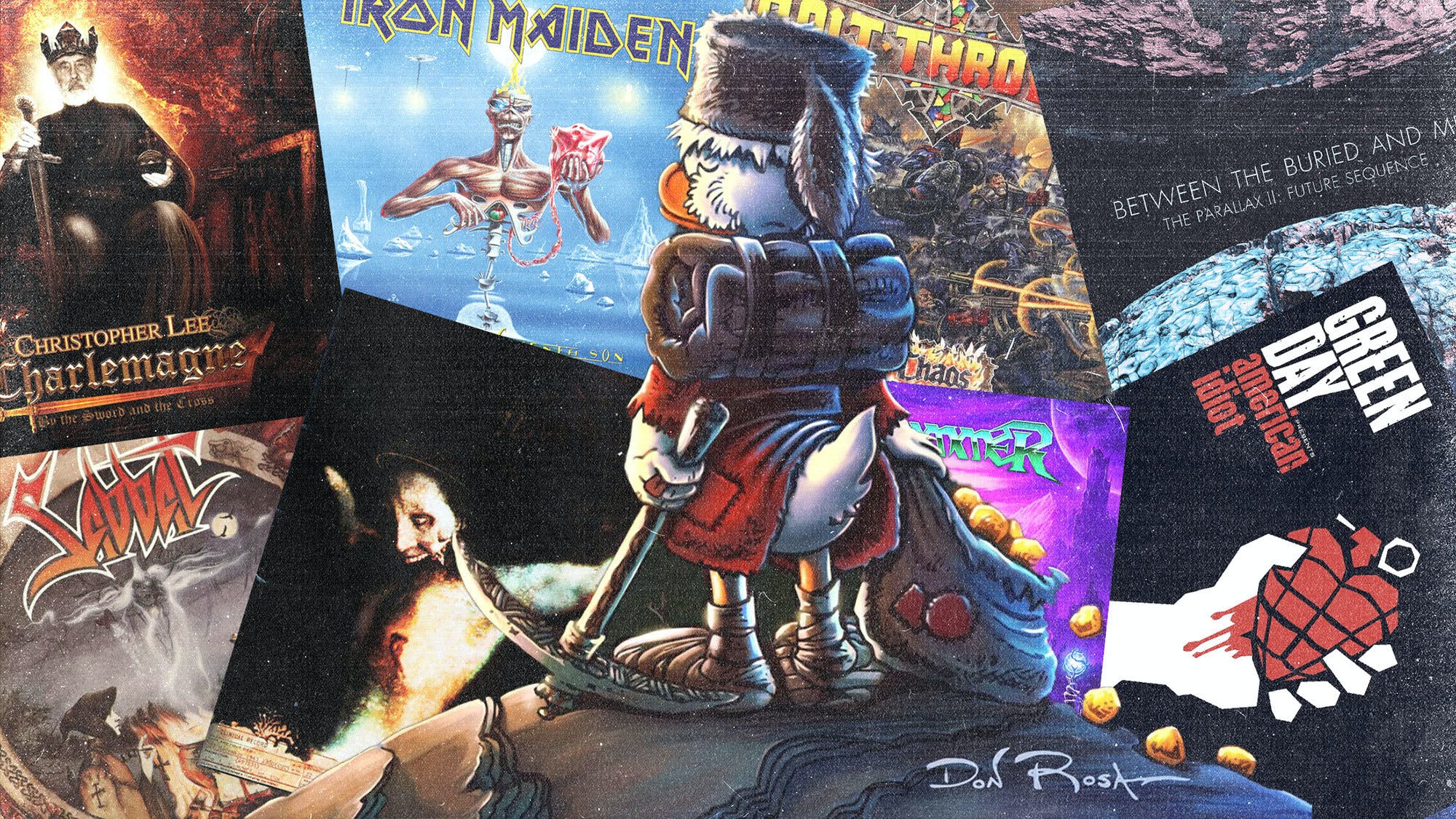 The fact that Nightwish are returning with a brand new concept album of sorts in HUMAN. :||: NATURE. reminds us that creative lynchpin Tuomas Holopainen once released one of the most bizarre concept albums ever. And we’re not even talking about the bizarre flight of fantasy that was the band’s album/movie crossover Imaginaerum.

We’ve previously explored some of the craziest concept albums ever made, but there are plenty more out there. Here are another 14 mind-blowing concept records that are amazing, wildly imaginative, simply bonkers or a combination of all three…

Yep, this is the one. The Nightwish guitarist takes a deep delve into the story of Scrooge – not the original Dickens character mind, but Scrooge McDuck. As in the Disney character. Donald Duck’s uncle. A cartoon duck.

“When you’re an artist you write about things that truly inspire you,” he told Kerrang! a couple of years ago. “It’s one of my favourite book series and the idea was so absurd that I just had to realise it. I think it might be the first time the graphic novels have ever been scored, but whenever I read them my head was always filled with music.”

How can you follow that? Perhaps it’s impossible, but a brutal British death metal album based on the lore of tabletop sci-fi wargame Warhammer 40K comes close. The story goes that Bolt Thrower were massive gaming nerds and the owner of Games Workshop was a massive metal fan, so a collaboration seemed made in Valhalla. The band were even set to sign to a Games Workshop-owned label who would then supply them with Warhammer-themed stage-sets, but the company changed hands before it came to pass.

What do you do if your pirate-themed day job band isn’t quite preposterous enough? If you’re Alestorm frontman Christopher Bowes, you reinvent yourself as the dread wizard Zargothrax and start a new conceptual fantasy/sci-fi band called Gloryhammer. Their three albums have followed a single mad story filled with goblin kings, chaos unicorns and raging Astral dwarves from Aberdeen. Sure.

Christopher Lee – Charlemagne: By The Sword And The Cross (2010)

Has any human being been cooler than Christopher Lee? He’s played Dracula, Saruman and Count Dooku. He’s been a Bond villain (Scaramanga in The Man With The Golden Gun) and in real life he served in the Royal Air Force’s special ops branch during World War II. He also found time to record a pair of metal albums charting the rise and fall of the Emperor Charlemagne, of which this was the first. What a hero.

Kerrang! readers recently voted Seventh Son… Iron Maiden’s best album and with good reason. The band’s only full concept album saw them at the peak of their creative powers and remains an all-time metal classic. The story revolves around a boy with supernatural powers – the seventh son of a seventh son being a recurring character in religious tales and folklore.

“It’s a classic story of good versus evil, only with no guarantees whatsoever that it’s the good guys who eventually come through,” vocalist Bruce Dickinson told us. “None of us get through our lives smelling of roses everywhere we go; everything is a constant battle to try and stay sane, to cut through all the bullshit that gets in our way.”

It’s a toss-up which concept album had the bigger impact – Green Day’s American Idiot or MCR’s The Black Parade, which followed a couple of years later. This rejuvenated the Berkeley trio’s career – as well as being an era-defining portrait of dissent and dissatisfaction – drawing a line between the political and the personal, centred on the working class antihero Jesus Of Suburbia. It was also made into a Broadway musical for good measure.

This doesn’t present a single story but does follow a central concept, with every song being based on a piece of literature. There’s a definite horror leaning with metalcore takes on Dracula, The Exorcist and Carrie, but Ice Nine Kills also tackle the likes of George Orwell’s Animal Farm and Shakespeare’s Romeo & Juliet. They followed it with the similarly movie-themed The Silver Scream in 2018.

Between The Buried And Me – The Parallax II: Future Sequence (2012)

Loads of bands have taken inspiration from science fiction, but few have done so with quite the same mind-bending aplomb and complexity as Between The Buried And Me. This album continued the story from EP The Parallax: Hypersleep Dialogues and, while it’s far too abstract to sum up in a paragraph, it follows two characters who turn out to be sides of a single protagonist as they ponder their existence, the death of planets and perhaps the whole of humanity.

Every metal band over the past three decades who have explored the sci-fi realm owe a debt to Queensrÿche for this early piece of proggy conceptual genius. Like most of the best sci-fi it reflects contemporary concerns and dealt with themes such as addiction, corruption and political disconnection, all via protagonist Nikki’s entanglement in a murderous group of revolutionaries.

This isn’t the only Viking metal concept album out there. Bathory’s Blood On Ice, Amon Amarth’s Jomsviking and The Varangian Way by Turisas are all suitably epic, but we’ll go with Insomnium’s gloomy classic for two reasons. Firstly, it tells the tale of a group of warriors encountering supernatural forces on a mythical journey across a single magnificent 40-minute track – although it was cleaved into several bloody chunks for streaming services. Secondly, it's accompanied by a compelling novella by bassist/vocalist Niilo Sevänen, which, along with the artwork, creates a wonderfully complete whole.

Shock rock king Alice Cooper has made a number of concept albums. Welcome To My Nightmare might be a better piece of music, but the backstory behind From The Inside is the most interesting. Alice wrote it during and after his stay in a New York sanitarium due to alcoholism and other issues, with each song supposedly based on either his own experience or a real-life inmate he met on the inside.

A mid-2000s emo concept album meditating on the subject of death? Now that sounds familiar. Armor For Sleep’s second album emerged a year before MCR’s The Black Parade however, and the two have very different approaches. What To Do When You Are Dead follows the protagonist's suicide into his journey through the afterlife, as he goes through the five stages of grief.

Sabbat – Dreamweaver (Reflections Of Our Yesterdays) (1989)

The UK didn’t produce too many great thrash bands in the genre’s heyday, but it did spawn one of the best. Sabbat were smart, slamming and always delightfully weird. Or possibly wyrd, as this album was based largely on The Way Of Wyrd: Tales Of An Anglo-Saxon Sorcerer, a book by psychologist Brian Bates. Cue a tail of Paganistic mysticism as a missionary named Wat Brand travels through pre-Christian England.

A lot of the concepts on this list are built on the fantastic and fabulous. Mazza’s convoluted modern parable was semi-autobiographical and very much rooted in turn-of-the-century, post-Columbine America, albeit with everything twisted to even more grotesque extremes. Part of a sort-of inverse triptych, with Mechanical Animals and Antichrist Superstar serving as prequels, it deals with issues including gun culture, commercialism and the cult of celebrity in Manson’s own unique style.