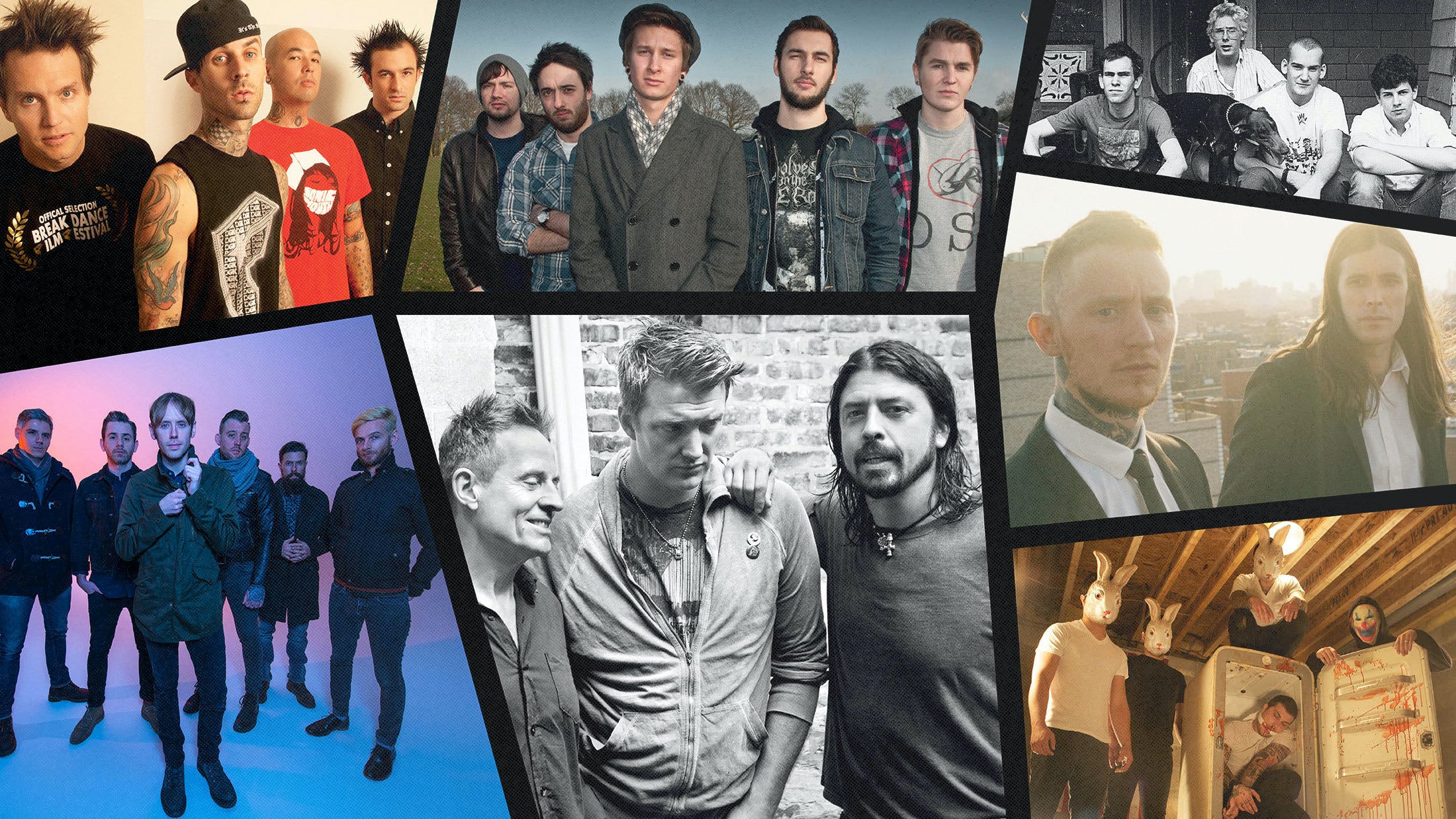 Some bands begin their recording career with a stunning album and begin to overstay their welcome with lacklustre releases. There are some, however, whose flame burns brightly then disappear before sullying their legacy.

Are you an album completist with a temporary cashflow problem? Here are 19 debut albums worth your time and money.

An anagram of Far frontman Jonah Matranga’s onelinedrawing solo project, New End Original boasted a line-up featuring ex-Chamberlain drummer Charlie Walker, plus Texas Is The Reason members Scott Winegard and Norman Brannon. While Thriller never sold a fraction of Michael Jackson’s 1982 album of the same name, it yielded many highlights: the bouncy opener Lukewarm, the piano-led melancholia of Leper Song and the gut-punch of Hostage. The band only lasted two years or so before pursuing other projects.

Rinoa – An Age Among Them

Naming themselves after a character from Final Fantasy VIII, this Essex-based post-metal quintet formed in 2007 and released their debut An Age Among Them in 2010, only to split the same year. Produced by Devil Sold His Soul’s Johnny Renshaw, this epic, intense and uplifting eight-track collection remains a must-listen nine years after its release.

Like New End Original, Handsome’s line-up was of a high pedigree. Ex-Helmet guitarist Peter Mengede formed the band in 1995, and recruited Quicksand’s Tom Capone, Enemy’s Eddie Nappi, Cro-Mags’ Pete Hines and Iceburn’s Jeremy Chatelain. During their three-year tenure, the band recorded their self-titled debut with producer Terry Date (Pantera, Deftones). It’s a post-hardcore masterpiece and why this band weren’t a success is a mystery on par with the city of Atlantis and magnets.

READ THIS: 20 things you probably didn't know about Dave Grohl

Leathermouth was an aggressive hardcore side project by My Chemical Romance guitarist Frank Iero, which featured keyboardist James Dewees on drums. Frank told MTV than MCR fans would be “bummed out” by the pessimistic 10-song album which touched on topics like mental health and politics. One song, I Am Going To Kill The President Of The United States Of America, earned him a home visit from the Secret Service. The government agents allegedly told him that if he re-released the song or performed it live, he would be imprisoned for five years.

Before Rocket From The Crypt, frontman John ‘Speedo’ Reis formed Pitchfork in San Diego, and recruited Rick Froberg to frontman the band. Their debut album was recorded in 1988 and released two years later. Burn Pigs Burn and Placebo showcase guitarist Reis’ intricate yet aggressive approach to his instrument and shaped the sound of post-hardcore. The band split in 1990 shortly after the album’s release, leaving Reis and Froberg to form Drive Like Jehu.

Tom DeLonge formed Box Car Racer 2001 to perform songs he felt weren’t suited to blink-182. Recruiting Travis Barker and Hazen Street bassist David Kennedy to realise his post-hardcore project, their self-titled debut was inspired by the likes of Fugazi and Quicksand. They disbanded two years later after Tom felt the band had run its course. All was not lost, however, as the album inspired the looser feel of blink-182’s self-titled 2003 album.

READ THIS: The inside story of blink-182's Enema Of The State

+44 – When Your Heart Stops Beating

Following the break-up of blink-182 in 2005, bassist Mark Hoppus and drummer Travis Barker quickly began working on +44, named after the UK’s international dialling code. Far removed from upbeat pop-punk, When Your Heart Stops Beating was influenced by The Cure and featured the use of synthesisers. After a plane crash which almost claimed the life of Travis in 2008, the members of blink reconciled and eventually reformed the following year. +44 has remained on hiatus ever since.

This hardcore quintet were formed in 2007 by Richard Carter – younger brother of Gallows alumni Frank and Steph – and released their impressive debut Dead Hearts through Search And Destroy. Produced by Colin Richardson, the band toured with the likes of Cancer Bats and Every Time I Die. Although they called it a day in 2010, they reunited to support Frank Carter & The Rattlesnakes on their 2015 headline tour.

After Ian Watkins was sentenced to 35 years in jail, the five remaining members of Lostprophets formed No Devotion with vocalist Geoff Rickly. The Thursday frontman said: “I didn't think it was fair what was happening to them and, well, the music was too good to pass up.” Permanence, then, was a brooding debut with elements of post-punk and pop, and deservedly earned the band Best Album at the Kerrang! Awards in 2016.

Formed in 1985 by Berkeley punks Tim Armstrong, Matt Freeman, Jesse Michaels and Dave Mello, Operation Ivy named themselves after a nuclear weapons testing program. Their 1989 debut album, shaped by punk and ska, had a similar effect on the East Bay scene and remains the most important album of the genre three decades after its release. The opening song, Knowledge, was covered by Green Day and has remained a staple part of their set.

The Postal Service – Give Up

The brainchild of Death Cab For Cutie frontman Ben Gibbard and DJ Jimmy Tamborello, Give Up was the second album released by Sub Pop to go platinum in the USA. Its delicate electronica and new wave feel earned favourable reviews and has sold over a million copies to date. The band ran into legal problems with the actual United States Postal Service over their name; it was eventually settled with a free concert and the sale of their album through their online shop. Rock'n'roll.

Shortly before Frank Carter quit Gallows due to musical differences, he formed the band Pure Love with The Suicide File guitarist Jim Carroll. The band’s debut album, Anthems, was far removed from the piss and vinegar of the Watford band in which Carter made his name. Instead, the swaggering 11-track effort was infectious rock'n'roll in the vein of The Cult and Manic Street Preachers. The duo went on indefinite hiatus in February 2014, and cleared the decks two months later with the release of The Bunny EP.

This Washington DC act, fronted by Guy Picciotto, were only active for two years in the mid-80s and are regarded as the first emo band. Along with Embrace, Dag Nasty and Gray Matter, they were at the forefront of the Revolution Summer in 1985 – a movement which attempted rid punk of its troubling reputation of thuggery. They disbanded after 15 shows, but managed to record their self-titled album with Ian MacKaye; a collision of frantic, melodic hardcore and Guy’s hoarse, part-screamed introspective lyrics. Guy and drummer Brendan Canty went on to join Ian in Fugazi.

Minor Threat – Out Of Step

Formed in Washington DC, Minor Threat, Minor Threat’s DIY ethos had a massive impact on the punk scene. The band featured vocalist Ian MacKaye, drummer Jeff Nelson, bassist Brian Baker and guitarist Lyle Preslar – later expanding to a five-piece, with Baker switching to guitar and Steve Hansgen taking over bass. They released their brash, intense nine-track album Out Of Step in 1983 before breaking up. The album was later repackaged along with their three EPs and their contributions to the 1982 Flex Your Head compilation. It remains one of the most important hardcore releases of all time.

Following Wood’s death, his friend and roommate Chris Cornell wrote two songs – Reach Down and Say Hello 2 Heaven – in tribute. Bringing in Stone and Jeff, along with guitarist Mike McCready and drummer Matt Cameron, the side-project expanded into a full band. Backing vocals were provided by Eddie Vedder, who’d traveled to Seattle to audition for what was to become Pearl Jam. The anthemic Hunger Strike was released as a single, followed by their self-titled album in April 1991. The project was put to one side as their members concentrated on Soundgarden and Pearl Jam. The album was rereleased the following year and reached Number 5 in the US Billboard chart.

Publicist UK were a band that were neither publicists nor from the UK. Despite featuring members of Municipal Waste, Freshkills, Revocation and Goes Cube, this U.S. four-piece created slabs of intricate, brooding post-punk in the vein of Joy Division and Swans. Allow their Relapse debut Forgive Yourself to consume you like a tsunami of tar.

On October 28, 1977, this London-based gang of misfits released their debut album. The band were already notorious by this time, largely due to their last-minute, sweary appearance on Bill Grundy’s Today show after Freddie Mercury pulled out to visit a dentist. The BBC took issue with their single God Save The Queen and banned the song from their radio stations. Even the album title proved too much for some record shops, who refused to stock the album. Nevertheless, the album went gold shortly after its release and their implosion during a US tour the following year only served to add to their legend. 42 years later, Never Mind the Bollocks, Here's the Sex Pistols remains the most important punk album of all time.