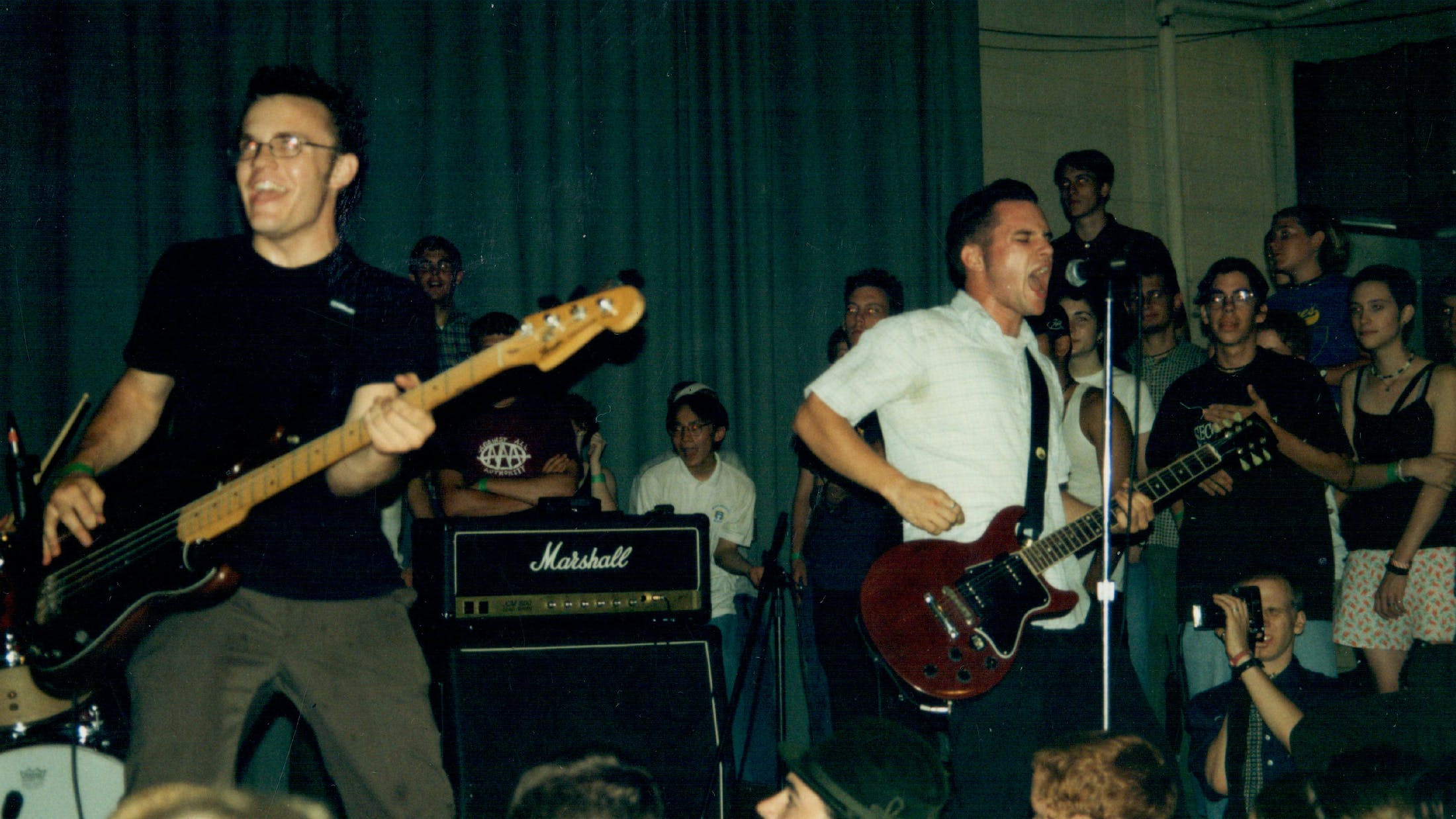 In 2000 and 2001, Vagrant Records released the first two volumes of a compilation series called Another Year On The Streets. This was before the internet had really revolutionised listening habits, when CD samplers still played a huge part in spreading the word about a label’s roster. And there are fewer finer than those two featuring tracks from Alkaline Trio, The Get Up Kids, Dashboard Confessional, Rocket From The Crypt, Saves The Day, The Anniversary, Hot Rod Circuit, Face To Face, Hey Mercedes, Reggie And The Full Effect and more. These CDs firmly established Vagrant as one of the pre-eminent labels of alternative music at that time.

That idea was reconfirmed at the 2002 Reading Festival. Artists at the top of the bill included big-hitters like Foo Fighters, Muse, Guns N’ Roses, The Prodigy and The Offspring, but over on the Concrete Jungle Stage, almost every band on the bill was signed to Vagrant (whose presence in the UK was bolstered by a licensing deal with Hassle Records and had songs on those samplers). Even today, listening to those compilations, it feels like they were more than just an advert for the label. Those bands might not sound anything like each other, but they played and toured together frequently, and built up a following that was as devoted to the label as it was the bands themselves. As a result, Vagrant was soon seen as a vital part of what would come to be known, rightly or wrongly, as the third wave of emo, before it went stratospheric with My Chemical Romance and Fall Out Boy.

Back then, though, Vagrant’s wing of the scene – for want of a better term – truly seemed like the centre of it. And it all began with The Get Up Kids. After starting the label in 1996, Rich Egan and Jon Cohen famously borrowed $50,000 from Jon’s parents to fund the recording of the band’s second album, Something To Write Home About. A polished but no less emotionally intense set of songs compared to their 1997 Doghouse debut, Four Minute Mile, it was released on September 28, 1999, and it changed everything.

“Rich was managing the band at the time,” remembers Jon, “and he played some early EPs for everyone. Matt [Pryor, singer/guitarist]’s voice and the infectiousness of the music was simply different from other music. It was amazing.”

The record’s success firmly put the Vagrant on the map. Off the back of the success of Something To Write Home About and the bands that signed to the label as a result, Vagrant soon became a nucleus – along with Drive Thru and Jade Tree – for what people decided was the new phase of emo. Not that that was in any way part of the label’s plan.

“We were focused solely on The Get Up Kids and Something To Write Home About,” admits Jon today. “It’s a masterpiece. Quickly, they surfaced as our flagship band, and other amazing artists came pouring in.”

“We signed to Vagrant because it was a label with a great reputation of taking care of their bands and helping them get to the next level, without having to compromise artistic vision,” explains Jeremy Ray Talley, guitarist for The Bled, who released 2005’s Found In The Flood and 2007’s Silent Treatment on the label. “We knew a lot of bands that had a lot of positive experiences with Vagrant.”

As for The Get Up Kids themselves, being the flagship band meant the allure that their success provided for others wasn’t present for them. In fact, signing on the dotted line was something they felt they didn’t have much choice about.

“Honestly, it was kind of an act of desperation,” explains Matt Pryor. “We knew we needed to get off Doghouse and were talking to major labels, but all those negotiations fell through. Vagrant made us an offer and we decided to gamble on them.”

The gamble worked. Buoyed by the deserved success of Something To Write Home About, both band and label began to flourish. Over the next few years, the label would release a series of truly seminal and important records such as Dashboard Confessional’s The Places You Have Come To Fear The Most (and MTV Unplugged), Saves The Day’s Stay What You Are and Alkaline Trio’s From Here To Infirmary, as well as albums by The Bled, From Autumn To Ashes, Senses Fail, Hot Rod Circuit, Alexisonfire, Hot Rod Circuit, The Anniversary and more.

But wait a minute, you’re probably thinking. None of those bands sound like each other. And they’re not really emo. Well, yes. Without getting too deep into semantics, histories and definitions of what emo is or isn’t – there are whole websites devoted to that – none of these bands would self-identify as emo. Matt, who always gets a little grumpy when that word is brought up (and for good reason), doesn’t disappoint when asked whether he was aware that most Vagrant bands were being dragged into a scene they had no intention of belonging to in the first place.

“I’m not sure what you mean by that,” he says. “I don’t think it’s possible to get dragged into a scene that you don’t want to be in. In the beginning, we didn’t have any awareness of a ‘scene’; there isn’t a ‘scene’ where we’re from. But we played shows and made friends with the bands we played with. Then somewhere down the line people started calling it a ‘scene’.”

“I understand Matt’s sympathies,” admits Jon. “Funnily enough, where I sat, mixed up in the excitements and anxieties of running a label, it was hard to step back in the moment and label anything ‘emo’. It’s only in retrospect that I can see the scene we helped to contribute to, which many people like to label as emo. But there were many other great labels, too, Drive Thru and Jade Tree among them.”

Francis Mark, the (clean) vocalist of From Autumn To Ashes, counters Matt’s protestations slightly, though it should be pointed out that this was not a direct response to Matt’s answer, simply his own reply to the same question.

“I don’t think anybody got dragged into anything without being at least partially willing,” he says. “It’s probably silly how many bands would feel either pride or shame over some categorical title someone else prescribed to them. I remember an amazing sense of community and a feeling of unity, albeit with the potential for things to get very shallow and petty.”

And, as if to demonstrate just how nebulous, non-descriptive and, ultimately, redundant the ‘emo’ tag really is, The Anniversary singer/guitarist Justin Roelofs delivers a humorous but accurate response that shows just how deeply embedded into culture emo has become since those heady Vagrant days.

“Believe it or not,” he begins, “when we started this band in 1997 as kids in the basement in Kansas, we mapped out the whole thing. We drew out a big chart, starting with bands like Jawbreaker, Sunny Day Real Estate and The Get Up Kids, eventually leading to our band The Anniversary. And then we drew lines from there to bands that didn’t even exist yet, like Fall Out Boy, and eventually even lines to the modern era, highlighting future artists like Lil Peep and Juice Wrld. That chart was like one giant future-telling oracle that was stolen out of our van in the year 2000, allegedly by one of the future members of My Chemical Romance.”

Tongue-in-cheek comments aside, the enduring impact of Vagrant’s roster back then can still be felt today in the alternative/emo scenes that were inspired by those bands and those albums. They were – however unwittingly and unwillingly – a fundamental stepping stone to the next wave of emo that took their permutation of the scene to the top of the charts. That’s something even Matt Pryor begrudgingly concedes.

“That’s what people tell me,” he says glibly. “It doesn’t really matter to me.”

To some extent, he’s absolutely right. Emo or not, what Vagrant did was simple: they put out music by bands they believed in, and from that grew a sense of community that was then pegged by others as a scene. There never will be a consensus on what emo is or isn’t, nor is that particularly important. As Jon puts it: “Frankly, I never thought The Get Up Kids sounded like Dashboard or Dashboard like Saves The Day, but they all fit into a certain shape that people labeled as ‘emo’.”

Regardless, it’s clear that, for all the bands on the label at that time, it felt like something very special was happening.

“It truly was a fantastic situation,” says The Anniversary’s Adrianne Verhoeven, “and very cool and special while it lasted. All of the folks at Vagrant were great and very supportive of what we were doing creatively. And the scene was pretty sweet – sometimes wild and always fun! We had a blast. To quote Reggie And The Full Effect: ‘Good times, good tunes, good buds’ and now: great oldies!”

“It definitely felt like something special was happening,” says Riley Breckenridge, the drummer of Thrice, who released four albums on the label between 2007 and 2011. “We had friends on the label and we were fans of a lot of the bands on the label. They’d already done a decent job of cementing their legacy as a landmark independent label with the success of Dashboard, Saves The Day, Get Up Kids, etc, and we were grateful to be a part of that family.”

“The friendship between the bands,” he answers, when asked about his favourite memory of being on Vagrant. “The whole thing was just a really good hang.”

Doritos, menthol cigarettes and the fall of free market capitalism: Life on the road with Alexisonfire