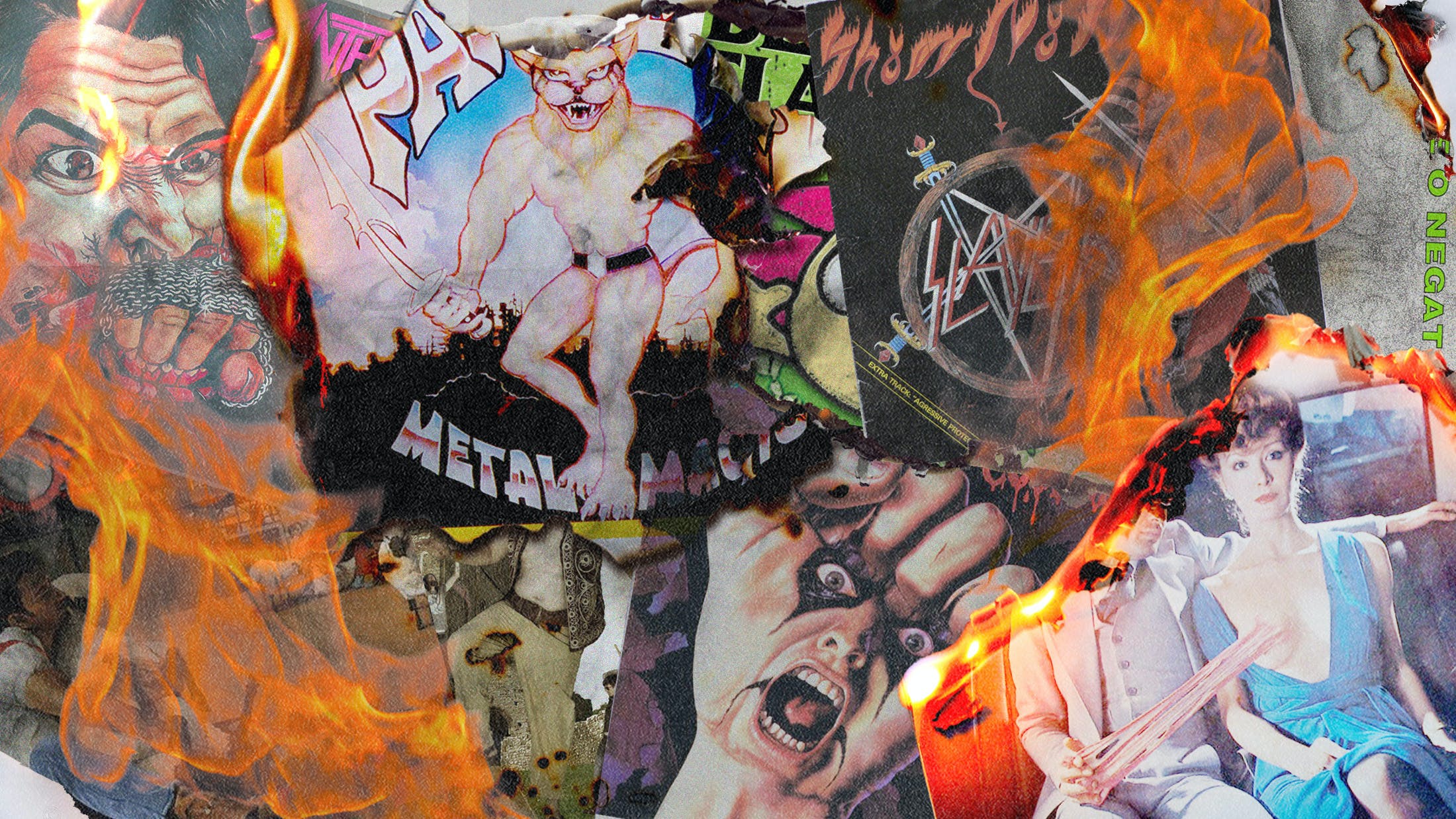 Before the virtual grab bag of the internet, bands would have to rely on their covers to catch the eye of any potential fans. How many people have you heard saying they discovered their favourite bands by simply picking up an album simply because it looked cool?

Some bands weren’t so careful about presenting their hard work in the studio. Here, then, are 50 creative misfires so heinous you may never want to look at an album again.

Women and Doberman Pinschers both appreciate a man in a pair of slacks. If anything else comes to mind while gazing at this image, then you’re beyond help.

Black Flag – What The…

What better way to piss all over the visual legacy of your band’s back catalogue by smashing this out in 10 minutes using MS Paint?

This band come from Ostrava in the Czech Republic. We’ve never been, so we're guessing there’s fuck all to do there.

There’s a good reason Alice Cooper is screaming and that’s because you’ve got fast broadband and the flat all to yourself.

This Barcelona band cancelled a long-planned trip to Games Workshop to do draw this. That’s true sacrifice.

That’s exactly what Jack said to himself once he’d dropped the artwork off at the printers.

Keydragon – Drink From The Waters Of War

It’s like someone explained a key scene from Game Of Thrones to their child and asked them to draw it in a darkened room.

Metal Church – Hanging In The Balance

If there was a brief for this staggering illustration, it was clearly misinterpreted.

It’s always nice to see a person’s soul escape an appalling album sleeve and enter the next realm.

Overkill – Under The Influence

Navigating the New York subway is hard enough without Avenged Sevenfold’s mascot trying to blast you with its eye lasers.

Remember when Ally McBeal used to have hallucinations of a poorly animated dancing baby? Here it is at some sort of mask party hosted by Eddie.

Is it a wolf or a mandrill? Why does it have vulture heads for fingers? No wonder it looks upset.

Riot – Fire Down Under

When it comes to band mascots, Iron Maiden have Eddie. Megadeth have Vic Rattlehead. Motörhead had Snaggletooth. And Riot, for reasons known only to themselves, had a naked man with a dandelion seal head. It’s memorable, if nothing else.

Set in an apocalyptic future, Dethkorpz must do anything to survive in a wasteland dominated by lemon-shaped chimneys spewing out toxic pollution. Best fire up the boob tank, then.

“I’m off to the shops. Does anyone want anything? No? Okay, bye then.”

In every GCSE art class there was always one person who’d spend ages on a band logo, then half-arsed the actual painting before the bell rang for lunch. It was you, wasn’t it?

Accept – Balls To The Wall

“The cover was all wrong, but we didn’t have the budget to do anything else,” says Scott Ian. No shit.

Hellish Crossfire feature the four types of people you’ll see waiting for a taxi in any provincial town at closing time.

If you’re the most intellectual punk band on the planet, why not use a photo which suggests your singer has just had an epic nap and doesn’t give a shiny shit.

"I didn't have any participation in the album cover," remembers drummer Bill Ward. "When I saw it, I hated it.” Can’t think why.

Motorcycle couriers in London have a quick temper, don’t they?

It’s the sort of sandwich that Heston Blumenthal would probably describe as “innovative”. We’ll pass, thank you.

A firestorm to purify the bane that society drowns in? This flame wouldn’t even trouble a lettuce leaf.

We bet this pair are a right handful at nursery school. Mind you, that evil baby is ripped.

Management: “Lads, I found a weird painting in a charity shop. We could use that as our album cover.”

Band: “Can we not use something a bit cooler? We want to make a statement with our debut album.”

Management: “What’s cooler than a cape?”

You can’t explore any English Heritage site without being attacked by some tiny, nu-metal also-rans.

I need your clothes, furry boots, your motorcycle and your badly drawn axe.

Adrian – One Step Into The Uncertain

Yo, Adrian, you did it! And our main question is: why?

A suited gentleman goes for a stroll and is confronted by a nude man standing on a brain. This is the sort of thing people had to deal with in Toronto during the 1970s and yet they’re still polite.

Haters will say this image is Photoshopped. Because it is.

The most diabolical thing about this album cover is the fact the person breathing fire has tucked their shirt in, like a total dad.

“Am I going to be famous?” roared the polar bear. Sort of.

This sheep must have a bellyache after eating too much grass. Luckily, this kind farmer is on hand to give it a soothing massage. Anyone who thinks he’s up to no good with this gentle creature should get their mind out of the gutter.

First thing's first: why is this cat-human hybrid wearing a belt?

Type O Negative – The Origin Of The Feces

Ever wondered what Pete Steele’s bumhole would have looked like? Wonder no more!

Here’s Riot’s dandelion-headed seal man again. This time, he's squatting over a pile of human skulls while a plane looms in the background. We’re getting… a metaphor for war or something?!

This album art perfectly captures the thin line between eroticism and the inconvenience of a handful of chewed bubblegum. That’s got to be it, right?

Who knew that the Devil would cut such a dash in leather underpants? Utterly chilling… if you’re five years old.

You’ve been waiting for the AA to arrive on a dark, cold night. Due to a clerical error, this lot roll up, disguised as military bees.

There’s a simple reason why Ted’s panicking about his hands turning into Gibson Byrdlands; he wouldn’t be able to shoot anymore elk in the neck.

We’ve read the lyrics to this song and it’s not about freeing a cow from a wire fence, unfortunately.

Boned – Up At The Crack

He should get that looked at, to be honest.

This strapping young man is so preoccupied with checking his testicles for lumps, he’s only gone and forgotten his sword. Lucky his mermaid wife has come to the rescue.

Mad – Taboo Of The Western World

What taboo is this? Floating roast parsnips in space?

This must be a concept album about a skeleton who’s been stood up at his desert wedding. His best man is relieved not to have to make his speech and can get on with some serious boozing.

The message reads: ‘Why?’

These Canadian speed metallers stressed the importance of avoiding the use of cheap peel-off face masks with this 1986 album.

Gruesome scenes from your cousin’s GCSE art portfolio. Is everything alright at home?