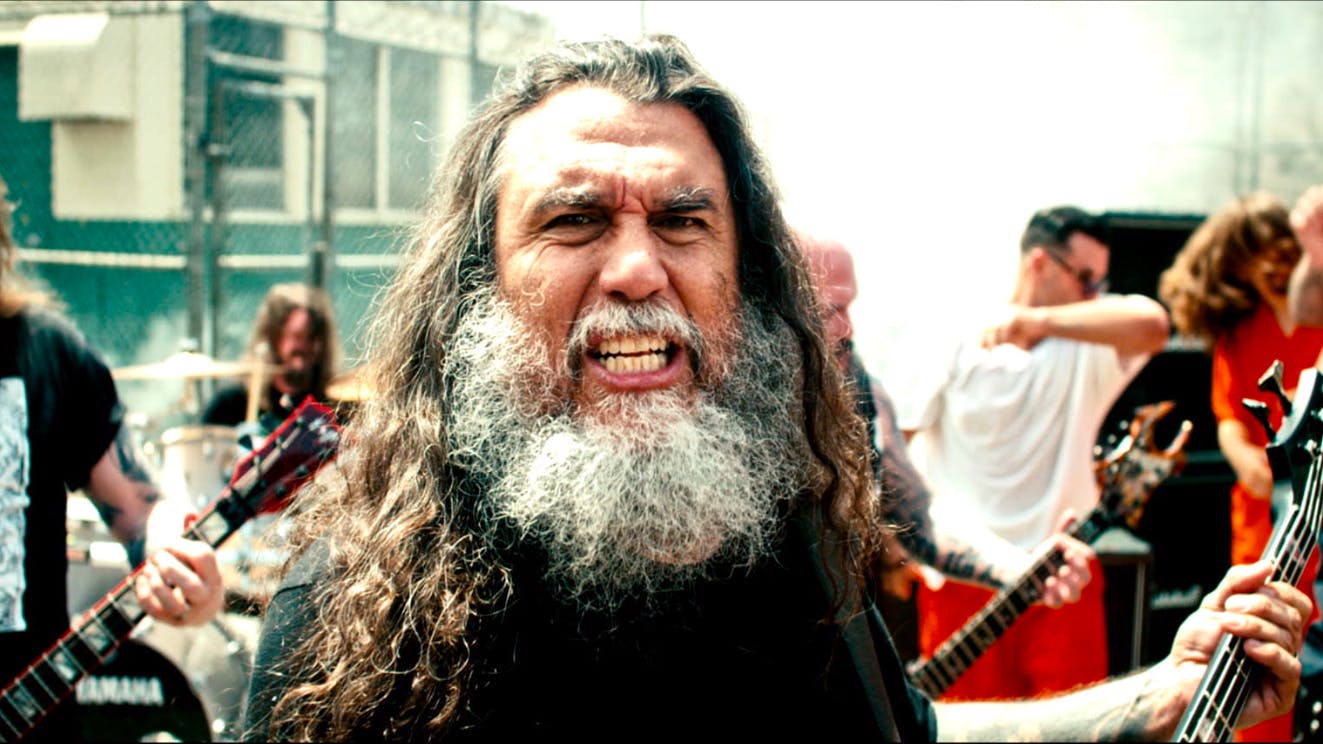 It was always going to be a long goodbye for Slayer. A good five months since they performed their final UK show on Donington’s hallowed turf, however, the craziest fans in all of music are getting one last chance to come together to celebrate the band that united them in sonic violence.

Tracking the campaign of revenge wrought by eye-patched anti-hero Wyatt against a group of white nationalists led by the near-demonic Luther, the BJ McDonnell-directed 40-minute short movie that begins The Repentless Killogy combines their recent triumvirate of music videos – You Against You, Repentless and Pride In Prejudice – with additional footage and a satisfying coda to complete its bloodthirsty narrative arc.

After that, we get their spectacularly filmed live performance from the Los Angeles Forum on August 5, 2017. Anyone who’s gotten in on the action will know what to expect here – fire, chaos and inverted-crosses, mostly – but there’s a real pleasure in getting to sit back and watch it all unfold without the danger of chewing on a knuckle-sandwich. Adding another wrinkle, Slayer were banned for so many years from even performing in Los Angeles county that this performance bursts with an extra layer of defiance.

Before violence erupts across the globe following its blu-ray release on November 8, we grabbed our popcorn and cranked the volume on a sneak preview to see what we could find out from the most ferocious metal movie of the year…

As anyone who’s already seen the music videos that form the short film’s basis will know, there is a lot of claret on show over The Repentless Killogy. There are stabbed crotches, eyes, mouths (and basically every other bodily surface or orifice you can think of) on display. There are inventive decapitations and gleeful disembowelments. A baby is killed in its mother’s womb. Hell, even the amp-stacks are bleeding into the snow at one point. Rather than shrugging it off as hysterical promotion, though, it seems the band were fully on-board. “I’m hands-off,” admits iconic guitarist Kerry King. “My job when working with a record producer is to play guitar. My job working with [the movie producer] was to play guitar – and headbang!” But the self-confessed “sick fuck” can’t deny he had a blast in the passenger’s seat. “For me, it wasn’t just about doing a music video, it was about telling a story...” And his favourite moment? That murder of mother and unborn child, obviously. A bonus shout-out, too, for the part where Kerry’s six-string counterpart Gary Holt pulls down the line of riot-police protecting the band to further unleash chaos, like some tongue-in-cheek indictment of Metallica’s comparatively anaemic 2003 St. Anger cut.

They’ve Got A Real Appreciation Of Exploitation Cinema

“Death and revenge are great levellers,” reads one title-card as the mayhem reaches fever pitch. It feels like a deliberate callback to the OTT genre-cinema to which so much of the attitude and aesthetic of Repentless is indebted. There is a schlocky, not-quite-realistic quality to the film itself. Halfway between fever-dream and nightmare, it distils the visceral thrill of violence and revenge down to their immediate, bloodthirsty core. Set in a world of incredibly violent men and (almost) entirely vulnerable women, there is a much of the seventies’ and eighties’ exploitative revenge cinema – think Death Wish, Mad Max, Straw Dogs – in here. There are even a few iconic sound-samples lifted from Tobe Hooper’s 1974 classic The Texas Chainsaw Massacre. These might go over the heads of those not steeped in the history of splatter, but for the many viewers who are, it’s a welcome feeling of fan-service for the sort of brutality that led to and from our love of extreme music in the first place.

"Beware that, when fighting monsters, you yourself do not become a monster,” reckoned legendary German philosopher and cultural critic Friedrich Nietzsche, “for when you gaze long into the abyss, the abyss gazes also into you.” That line of thinking holds up from a couple of different perspectives while watching The Repentless Killogy. Narratively, although one-time neo-Nazi Wyatt was probably never a good guy, he is drawn into a spiral of increasingly merciless brutality as his antagonists increase their reign of brutality against him and his family. Even with the knowing, boundary-prodding nature of the violence on display, the viewer is challenged by the soul-destroying actions of our main-character. And when Danny Trejo’s accomplice lifts the knife against one general’s defenceless wife and children, we have to ask if we’re really on anyone’s side in this conflict. From another point of view, it could be taken as a warning for fans to take this violent music – which has attracted its fair share of unsavoury characters in the past – with a generous pinch of salt.

Even From The Comfort Of An Armchair, You’ll Want To Mosh

As we segue – surprisingly smoothly, though we won’t spoil that – into the live show, the adrenaline takes hold. Disciple. War Ensemble. You Against You. Hell Awaits. Raining Blood. Chemical Warfare. Angel Of Death. And the rest… They’re songs precision-tooled to make the listener want to get up and smash, and they’re at their most potent when unleashed in the live arena. Admittedly, the current touring line-up featuring Kerry and founding frontman Tom Arya alongside Gary (on loan from Exodus) and sporadically-involved (but highly-skilled) drummer Paul Bostaph doesn’t have the same spark as the definitive incarnation of the band, but that only leads to a sense of get-the-job-done drive here that makes Repentless truly relentless. To properly suppress the urge to get up from your seat and throw someone across the cinema auditorium, more enthusiastic fans may actually need to be strapped-in...

There’s More Real Emotion Here Than You Might Think

We all know about the rage and wrath of Slayer’s music. The primal need for inflicting damage on one’s enemies, the dark lure of evil and the cathartic release of pummelling and being pummelled have been core to their becoming perhaps the most definitive act in all of extreme metal. Ever since this tour was announced to be their last, though – hell, ever since the passing of founding guitarist Jeff Hanneman and the departure of drummer Dave Lombardo – there have been other feelings at play. Fondness. Nostalgia. Finality. At the end of most of the shows on this run, it’s been a ubiquitous occurrence to spot big men wiping tears from their eyes and Tom stopping at the edge of the stage to drink in the adulation of each individual city one last time. Removed from the boozy chaos and sheer peril of actually attending the show themselves, those emotions are brought into even sharper focus as you peer at the silver screen and remember that you won’t get to indulge in that good-natured carnage ever again...

That Final Show Is Going To Be Insane

…unless, that is, you have tickets yet to be spent. As of writing, there are 16 shows still on Slayer’s countdown to extinction. The final Saturday night at The Forum in Los Angeles promises to be something truly spectacular, however. “To me, it’s ‘The Fabulous Forum’,” grins Tom in the Killogy’s promotional clip, explaining that the hometown space – one where he grew up watching the LA Lakers’ greats, and one that was off-limits for so long – holds a special, romanticised place in his heart. Even the scenes from this show – filmed over two years before the end – are utterly maniacal, with the band’s off-the-scale Satanic production fully unfurled and 17,000 punters bathed in red light hammering the shit out of each other. While, on one hand, we don’t envy the inevitable injury that’ll befall anyone who dares get down the front on November 30, when push comes to brutal shove, we probably would sacrifice a tooth or two to be there ourselves.

The Repentless Killogy will be released digitally and on Blu-Ray on November 8. The soundtrack will also be available on vinyl and CD.