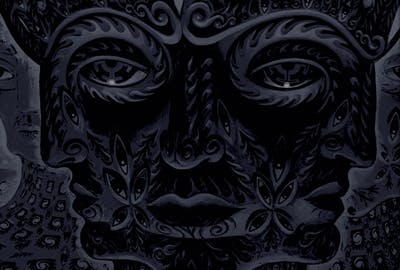 1. 10,000 Days Is Roughly The Orbital Period Of The Planet Saturn

Well, technically speaking, it’s 10,759 days – which equates to nearly 29.5 years. And it’s this philosophical notion of the Saturn Return that Maynard James Keenan once revealed as the meaning behind the title. “That’s the time in your 28th/29th year when you are presented the opportunity to transform from whatever your hang-ups were before to let the light of knowledge and experience lighten your load, so to speak, and let go of old patterns and embrace a new life,” he reasoned.

“It’s kind of the story of Noah, and the belly of the whale. You sink or swim at that point. And a lot of people don’t make it. Hendrix didn’t, Janis Joplin didn’t, John Bonham. Kurt Cobain didn’t quite make it past his Saturn Return. For me, starting to recognise those patterns, it was very important to start constructing songs that chronicled that process, hoping that my gift back would be to share that path and hope that I could help somebody get past that spot.”

Some fans believe that the length of time refers to how long the frontman’s mother, Judith Marie, was left paralysed following a stroke in the mid-'70s before her passing in 2003. There certainly is some connection considering one of the tracks is titled Wings For Marie (Pt. 1) – and it wouldn’t be the first time Maynard has referenced her either, his debut single with A Perfect Circle sharing her first name.

In 2010 documentary Blood Into Wine, the singer/wine producer explained that his Nagual Del Judith cabernet sauvignon was “named after my mother, Judith Marie. She passed away several years ago. She was an invalid for almost 30 years. She had an aneurysm when she was about 31. It left her paralysed on the right side of her body, and so she couldn’t really do a lot of travelling, couldn’t do much of anything really – read, write, speak, walk, tell time. You know, having to live roughly 29 years in that state.”

There’s a touching moment where the singer reveals how he chose to continue her journey through his adventures in viticulture. “It just kind of felt like this was the obvious solution, to spread her ashes over the vineyard,” he reflected. “That way, she kind of comes back in the form of vines and grapes, and she gets to travel the world now and see other places.”

3. Fans Have Created Their Own Secret Track

Heavy number-crunching from arguably the most eagle-eyed fans in rock revealed that adding Wings For Marie (Pt. 1) to Viginti Tres made for a piece of music 11 minutes and 13 seconds long – which, as it happens, was the exact same length as 10,000 Days (Wings Pt. 2). Playing both of these compositions simultaneously sounds like the recipe for insanity, yet doing so unlocks a new ‘secret song’ that somehow fits together.

It’s one hell of an Easter egg – though whether it was intentional is up for debate. As is the Tool way, it’s never been acknowledged by the band, though in 2014 Adam Jones did say this of such notions: “All I say is don’t read too much into it – ‘Dude, I got high and I played it backwards to The Sound Of Music…‘ That’s just not there.”

4. Meshuggah Were An Influence

“We’ve all been listening to a lot of Meshuggah,” guitarist Adam Jones told Kerrang! in the months building up to 10,000 Days’ release. The bands had previously toured together around their respective Lateralus and Nothing album cycles. “I see a lot of them in us and us in them,” he continued, noting “they really have a very experimental prog side to them. I don’t think it was like, ‘Okay right here we’re going to play like Meshuggah,’ but more, ‘Oh my god, that’s come out a Meshuggah moment!’”

These influences are most noticeable on second track Jambi – which utilises single-string riffs and polyrhythms that deviously bend and weave through different time signatures. Meshuggah guitarist Mårten Hagström is one of the lucky few to have heard some of the quartet’s new music, describing it as “the best I’ve heard of Tool.”

5. The Artwork Incorporated Alex Grey Painting ‘The Net Of Being’

Having first worked with Tool on Lateralus, Alex Grey’s eyeball-dissolving visuals would once again play a big part in the Tool aesthetic for album number four. The vision of infinite godheads came to him after consuming a psychedelic substance known as ayahuasca, used as spiritual medicine by indigenous Amazonians. In his 2017 interview as part of a Kerrang! Tool cover story, the visionary artist and spiritualist noted how the group “avoid the easy path and favour the hard, evolutionary road” and that “as sonic shamans, they are industrial strength psychedelic ‘Tools Of The Gods’, emitting visual and auditory resonance with the mysterium tremendum.”

'Net Of Being' image via AlexGrey.com

6. Alex Grey Also Contributed To Artwork For Nirvana And The Beastie Boys

“Nirvana’s manager requested the use of one of my paintings entitled Pregnant Female for the In Utero album,” Alex Grey told The Examiner in a 2013 interview. “I never met Kurt Cobain, but heard that he admired my art and promised to come to the studio the next time he was in New York. Then he died.”

The artist also spoke of how he came into contact with another much-missed rock legend, Adam Yauch of The Beastie Boys, who passed away in 2012. “Adam Yauch called asking to use the Gaia painting on the Ill Communications album,” he continued. “We spoke a few times on the phone and had lovely conversations when we ran into each other at Buddhist ceremonies and speaking engagements of His Holiness the Dalai Lama.”

7. Adam Jones Called The Eagles To Get His Talk Box Sound Right

It was in a 2006 interview with Guitar World where Adam Jones revealed the strange link between his band and The Eagles. It was the song Jambi, to be specific, which features the Talk Box effect famously heard on rock hits Sweet Emotion, Kickstart My Heart and Livin’ On A Prayer.

“I always wanted to use a Talk Box — I love Joe Walsh — but I never wanted to use it for the sake of using it,” said the guitarist. “We wrote this song and I knew that it was the song where the Talk Box would work really well. My friend who works for the Eagles’ booking agent talked to Joe Walsh and gave him my number. A while later I got a message from Joe on my answering machine: [imitates Walsh] ‘Adam Jones, this is the Talk Box fairy. Give me a call.’ I called him and he was totally cool and gave me a lot of advice. I think that the Talk Box on [The Eagles track] Those Shoes is really amazing, especially how the harmonies are in each speaker.”

The pouring rain and cracking thunder heard on 10,000 Days (Wings Pt. 2) were courtesy of Lustmord (Brian Williams) – whose first live performance in 25 years took place in 2006 as part of the high mass observance by the Church Of Satan. It was an experience the musician described as “one of those things that was just too funny to say ‘no’ to.” The dark ambient pioneer had previously remixed official versions of Schism and Parabola and later went on to collaborate with Maynard James Keenan further in Puscifer.

9. Lost Keys (Blame Hofmann) Is An Ode To The Man Who Invented Acid

Albert Hofmann made history as the first person to synthesize and experiment with the psychedelic effects of lysergic acid diethylamide, as well as understand the properties within hallucinogenic mushrooms. The Swiss pioneer, who died in 2008 aged 102, described LSD as a “sacred drug” that worked as “medicine for the soul” and provided a “material aid to meditation aimed at the mystical experience of a deeper, comprehensive reality.”

Similar words have been used by members of Tool and Alex Grey to describe their own mind-altering experiences. The exchange between a doctor, nurse and patient in Lost Keys (Blame Hofmann) takes places after the events described in following track Rosetta Stoned, where it would appear the patient regales a drug-fuelled story of alien encounters, self-exploration and spiritual awakening.