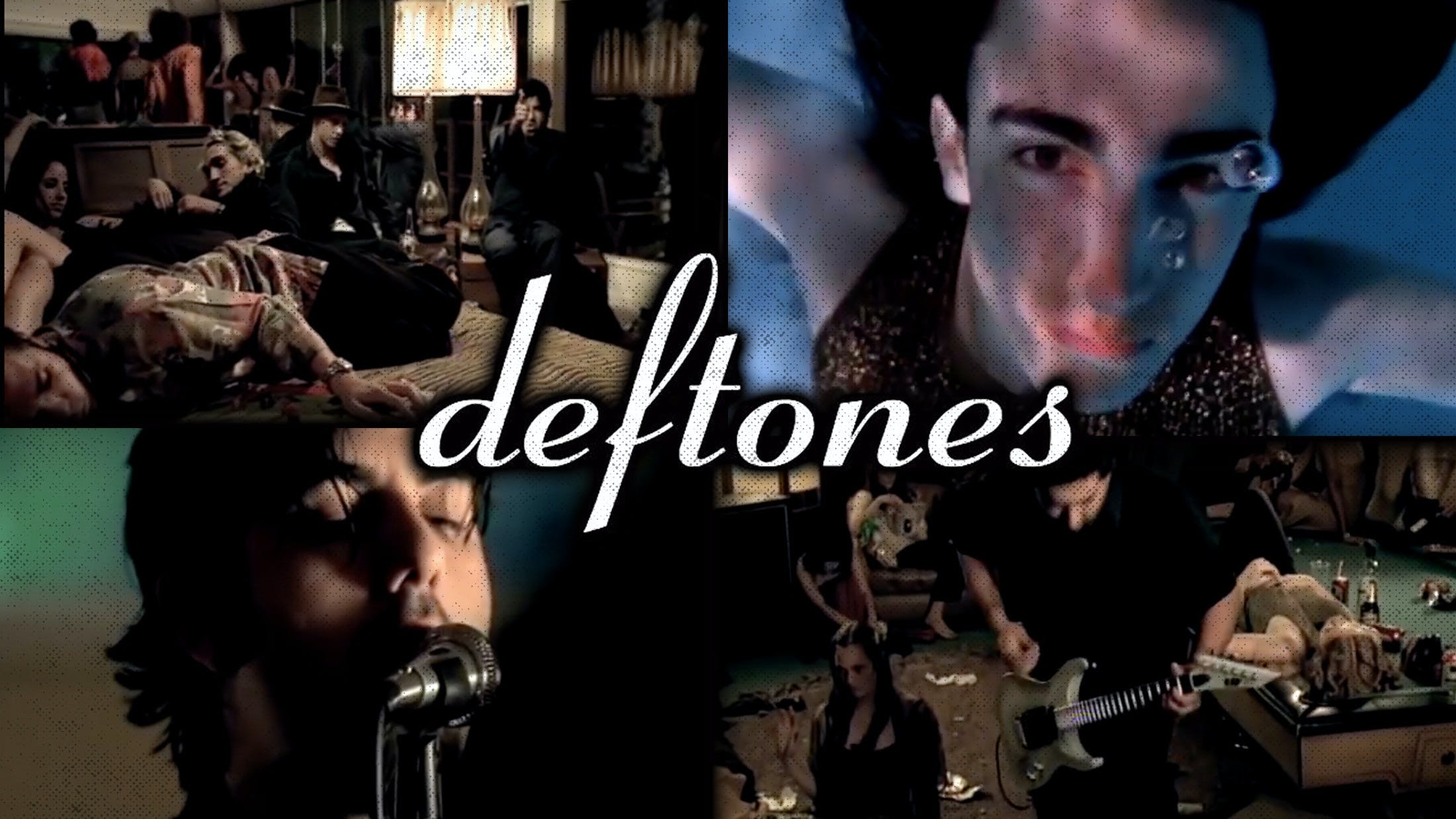 Nu-metal was, and remains, ace. With big trousers, bigger snarls and massive attitudes, it’s an unfairly maligned genre that was easily badmouthed but contained more creativity than it was given credit for.

Deftones, even at the time, were so much more, though. They’re widely acknowledged as such now – to the point that they’re sometimes referred to as 'the Radiohead of metal' (why aren’t Radiohead ever referred to as 'the Deftones of [whatever genre Radiohead count as these days]' btw?) – but around the millennium were frequently grouped in with a lot of bands they were, frankly, better than.

More experimental and less silly, they also have, in Chino Moreno, one of the greatest voices in rock. While he had previously mostly rapped, on White Pony – from which Change (In The House Of Flies) comes – he really opened up and, holy shit, he’s got some pipes on him. Everyone does a killer job on Change, and the whole album in fact, but Moreno’s vocals on this song are just extraordinary. You don’t hear the world 'sultry' used to refer to male vocals much, but this is sultry as fuck! A powerful, sexy banger.

0.01
We begin with the the sound of a guitar and a knackered room. White Pony was the first record that Moreno played guitar on, after only doing vocals on Adrenaline and Around The Fur.

0.07
See those forks? Single-use plastic. Let’s all move away from that, yeah?

0.37
Hang on, he was all on his tod when it zoomed in, but now loads of people are around him. Moreno and bassist Chi Cheng came up with the treatment for the video after being disappointed with what they were being offered.

"We got a ton of video treatments sent to us and they were all pretty much over-artsy, trying to take us out of our element," he told Gallery Of Sound. "Or they were just straight up silly, basically having us perform and having all these skateboarders and shit like that. Everything was either too complicated or too easy. So I just ended up writing my own treatment with Chi. The label sent it out to Nigel Dick, the director. I wanted to have performance in it, but not be us on a stage with a bunch of kids with tattoos and piercings stage-diving. I don't think we need that. And at the same time we don't need us in a desert dressed in Gucci clothing trying to look weird. I figure if we film it my house it's pretty much us, so it's a true sense of what we do."

0.39
Shout-out to the guy who, among all this hedonism and bacchanalia, is playing a board game. You do you, buddy.

0.44
When it cuts away it really looks like that lampshade is going to fly to the fucking moon.

0.51
There’s a lot of joyless, spent people, all partied out. In a behind-the-scenes clip, keyboardist/turntablist Frank Delgado said: “The concept behind the video is a never-ending party, going on for three days or so – a wild, exotic, indulgent party. The band doesn’t seem to be the primary focus.”

One of the models featured in the video agreed, saying, “The whole premise is like we’ve been up on drugs for three days.”

0.57
Director Liz Friedlander has made dozens and dozens of videos, including blink-182’s Adam’s Song, Harvey Danger’s Flagpole Sitta (better known as the theme from Peep Show), +44’s When Your Heart Stops Beating and Avril Lavigne’s Don’t Tell Me.

1.13
Even taking into account that most of these people are models – so are tiny – that is an enormous fucking pumpkin.

1.15
It’s impressively un-dated, this video, apart from these staticy bits (and the single-use plastic). The way everyone is dressed could be now, and the song more than holds up, so it’s weird to think of what a different place the world was when it came out.

2000 was a long time ago – while the most important numbers for a song are all online now, back then it was all about keeping your music off the internet. A radio station in Phoenix, Arizona, played Change before it was meant to after someone downloaded it, an idea that seemed baffling at the time. "It sucks in a way," said Moreno. "I understand that people want to hear it, and the majority of people that are downloading it are Deftones fans. It's been a long time since we put out a record, so they really want to hear the music. It also kind of sucks because we're not like, a platinum artist, so every record we sell matters to us. I still think a lot of people will buy the record, but at least they could wait until the record comes out. I was one of those kids that sought out music, finding bootlegs – I still collect bootlegs, I love that kind of stuff – so I can understand why kids want that kind of stuff. There's also a lot of really cool stuff from us. I was looking around and I saw, like, there's versions of us doing Weezer songs live and it sounds crappy, but I think there's a lot of novelty stuff. I think people are pretty much going to buy our record anyway." That Weezer video he’s talking about is a live version of Say It Ain’t So that went around early file-sharing networks and features him mentioning pigs a bunch of times.

1.35
So, other than putting the 'sex' into 'insects', what the heck is this song all about? Moreno himself described the song as “a beautiful metamorphosis”. It’s obviously about damage sustained by a relationship, right? Or is it? Maybe it’s just about a dude ripping wings off a fly. Moreno said “It’s a metaphorical song. You could take it in the literal sense of me watching someone turn into a fly and taking them home with me and pulling of their wings and laughing. It spawns from me being a complete asshole and getting the complete repercussion for it by having my life taken away.” “Nobody knows what it’s about except for Chino,” said Chi Cheng at the time.

1.55
That’s Chi Cheng on bass. Also a poet and spoken-word artist (who donated the proceeds from his spoken-word album to children’s music charities), he was tragically injured in a car crash in 2008, and spent several years in a semi-comatose state before dying in 2013. The outpouring of support and later grief for him from all over the world was testament to how loved he was, with star-studded benefit shows put on to raise money for his medical bills, tribute songs and a documentary.

2.10
Hang on, what the fuck just happened? She’s a print now? Imagine the size of the printer used for that – it would make that giant pumpkin look like a much smaller pumpkin!

2.28
Change features on the soundtrack to Little Nicky, at the time one of Adam Sandler’s most critically-disliked films but now ranking somewhere in the middle. It’s quite unfairly reviled, as it has some really great gags in it, an amazing supporting cast, a winning cameo from Ozzy Osbourne and an extremely 2000 soundtrack album also featuring Incubus, P.O.D., Powerman 5000 and Filter. Incubus and Deftones teamed up with Sandler for a promotional special on MTV, leading to this curio from the archives – an acoustic performance of Be Quiet And Drive featuring Sandler on guitar. The tone of the film is very different to that of the song, so producers slowed down clips from it to make it all seem a bit more poignant, which doesn’t really work as Sandler is pulling a silly face throughout the entire 90-minute runtime.

2.52
The horniness of the song was not lost on the producers of the shit-awful vampire film Queen Of The Damned, who used it to soundtrack a sex scene between the late, great Aaliyah and the substantially less-great Stuart Townsend.

3.25
THIS IS NOT CALLED CHANGE (IN THE HOUSE OF DOGS AND KOALAS).

3.30
There’s that static again, reminding us of the oldness of this video. It was shot on May 30 and 31, 2000. If anyone reading this watched the series Once Upon A Time by any chance, the actor who plays Henry Mills on that show, Jared S. Gilmore, was born on May 30 2000. He is an adult.

3.38
It’s a beautiful song, and just to rub it in, they wrote it effortlessly. Chino told MTV Europe that it came out of a thirty-minute jam session. “Everybody joined in, and in half an hour we had a song,” he said. Change (In The House Of Flies) went on to become Deftones’ biggest hit – a life-alteringly productive half-hour.