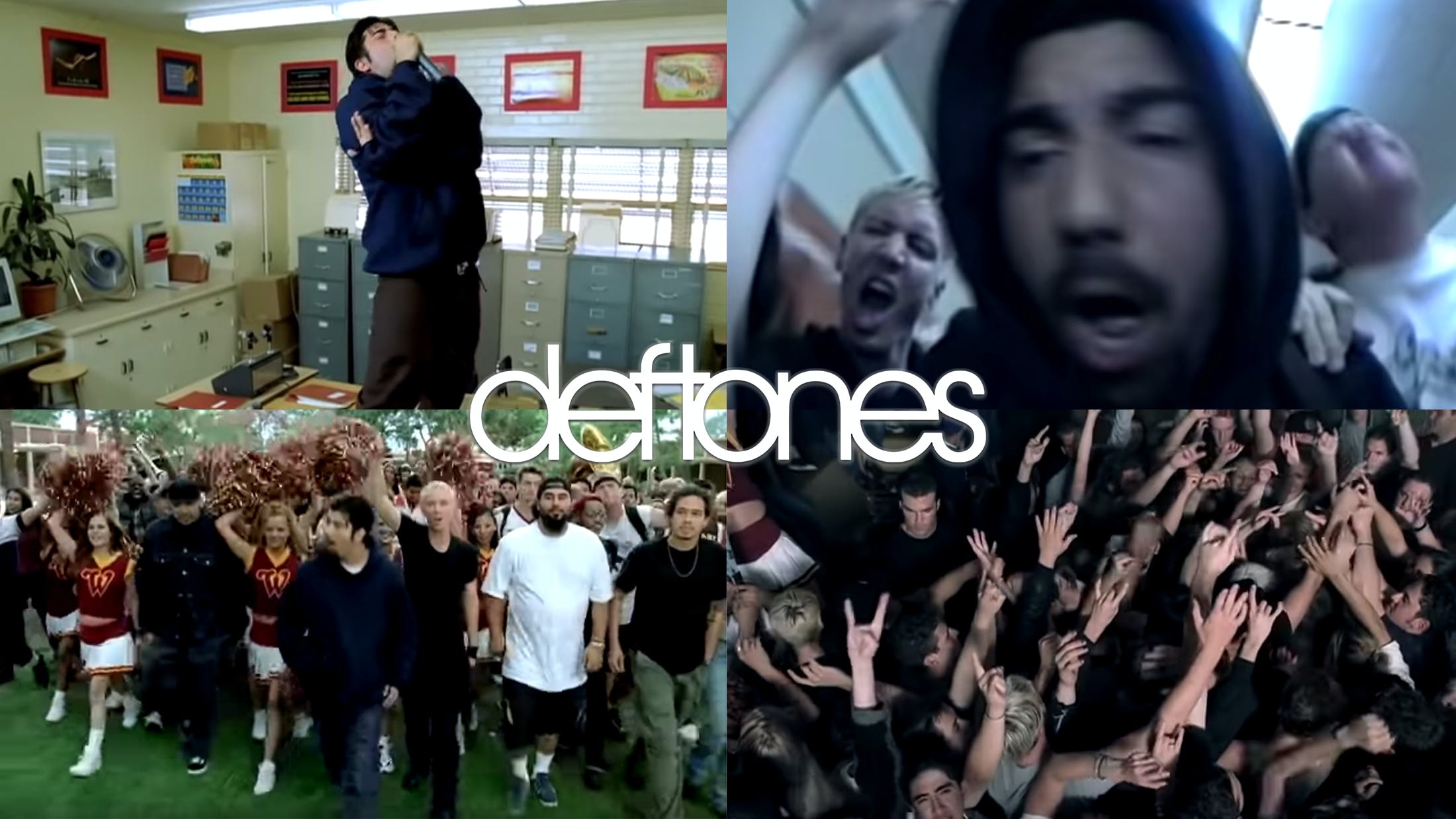 Art comes to people in different ways. Some people are struck by inspiration out of nowhere in the kind of quasi-divine moment millions dream of; a lightning strike of creativity coming from the heavens. Others sweat blood in the hope of conjuring up a masterpiece, analysing and re-analysing every letter, second and syllable to try to hone it to perfection.

And some people have an annoying note from their record label and end up creating magnificence out of spite, like Deftones absurdly, amazingly managed with Back To School (Mini Maggit), a re-working of another track done under duress in very little time and in a bad mood.

Let’s jump right in, shall we?

0.01
This is Grant High School, also used as a location in Saliva’s video for Your Disease and Tantric’s video for Breakdown?, according to online high school experts at any rate.

0.11
The posters in the background are all pixelated out, presumably due to copyright and licensing issues – it’s usually easier to just obscure things than spend loads of time and money getting permissions from various rights holders. You’d think it might have occurred to someone beforehand, but hey, what can you do, right?

0.12
The genesis of this song is extremely strange, and something of a sore point for Deftones. They submitted the (excellent) album White Pony to their label and were justifiably pleased with it. The label then came back requesting something heavier – Deftones were moving away from the currently hella-popular nu-metal sound and going more experimental. The decision was made, weirdly, to take the closing track of the album, the seven-minute Pink Maggit, and rework it into a single, something Chino Moreno was less than thrilled about. He decided to give the label exactly what they wanted but in a contemptuous 'fuck you' way. He told a German magazine: “After White Pony was released, they wanted us to do a new version of Pink Maggit. They said we lost our heaviness, and there were no more singles on the album. So I thought: 'I'm gonna show those fuckers how easy it is to create a hit single.' And I rapped a hip-hop part on that song, we shortened it and half an hour later, the hit single was ready to roll on."

0.18
Something Chino Moreno does not look like: a high school student. He’s 27 here, sporting a completely opaque beard.

0.26
Quick fistbump there with none other than the late, great, always missed, Chi Cheng.

0.30
Deftones’ issues with this song and their label didn’t end after their half-hour 'fuck-you-pal burst of alright-take-it-then-you-shitheads' thing. The single did so well that the label reissued White Pony with it as the first track. Moreno later said: "This album right here [the re-released White Pony] is not the album that we turned into the label. As far as we're concerned, the first edition was the record. Done. Then they talked us into re-releasing it with another song on it, and it’s not like I’m against the song or whatever, but I liked the sequence we had when we first turned it in. When this version came out, a little part inside all of us felt like, 'Fuck! We just totally compromised,' and I know that a lot of our fans felt bad about it too."

0.43
That girl does a very good job of looking bored while Chino Moreno screams in her face, an experience that would be a great many things, boring not among them.

0.48
These days a shot like this would be done with a GoPro and would be really straightforward, but this would likely have involved a big load of gaffer tape, a Sony HandyCam and a lot of trial and error.

0.49
There are some shots in this video that make it look like it was a pretty long day and Moreno’s heart wasn’t necessarily in it, understandable given the origins of the song. He looks fucking knackered here.

1.02
So, what’s going on here lyrically? One popular interpretation is that Chino (and Deftones in general) are lamenting that a style they sort of helped originate – nu-metal – has become a bit of a monster, and that they are surrounded by inferior acts doing poor-man’s versions of it all. Of all of the bands given that label, Deftones are arguably the one most short-changed by it, constantly evolving and experimenting, and they’d basically left it behind by this point. “Be better,” they’re saying to other, lesser bands. “We’re really good.”

1.13
Everything ever set in American high schools has one of these PA systems on the go.

1.19
Look at those computers. They have floppy disc drives. Amazing. Also, this classroom contains a globe, a periodic table and what appears to be a replica of Robby the Robot from Forbidden Planet, making you wonder exactly what lesson these students are in.

1.22
That shoutout to Kool Keith references the previous line, which paraphrases a line from his song I Don’t Play: 'I’ll be the man, watch your backpack, pen and pencil'. The title Pink Maggit, which the original version of this song had, also comes from Kool Keith.

1.27
There’s a certain type of brown trouser that you just don’t see on sale anymore.

1.41
That’s another thing you only ever see in American high school movies: marching bands. Why do American teenagers love trumpets so much? We might never know.

2.20
Chino’s dance here is fucking ace. He’s pretty much marching on the spot, but pulling it off. Rad.

2.30
Despite Moreno’s insistence that this song was “a mistake” and proof that he was “an idiot”, the single was very much worth buying as it came with the electronic press kit that had been sent out to TV stations promoting White Pony. It’s completely nuts.

2.39
This video was directed by Paul Hunter, best known for his work with Michael Jackson and Pharrell Williams, as well as the multiple award-winning Lady Marmalade video with Christina Aguilera, Lil’ Kim, Pink and Mya. Deftones weren’t thrilled to be working with him, with keyboardist Frank Delgado saying: “They engaged this pop director, who worked with Britney Spears before. It really went off shitty, due to that. High-school, glamour, all this shit.”

3.04
One of the extras from this sequence wrote on YouTube: “I was actually there. I'm in the video. It was such a surreal experience. A whole bunch of Deftones fans mixed in with some extras. And during a break while filming in the gym they played Change (In The House Of Flies). It was such an honour to be there. The band was totally cool with everyone. I was talking to Abe most of the time – he is so down to earth. Awesome time. Thank you Deftones!”

3.51
Wahey, well done everyone – despite your best intentions, you made a hit single. Just time for a bit of surprisingly flat singing from the crowd of extras, and we’ll call it a day.