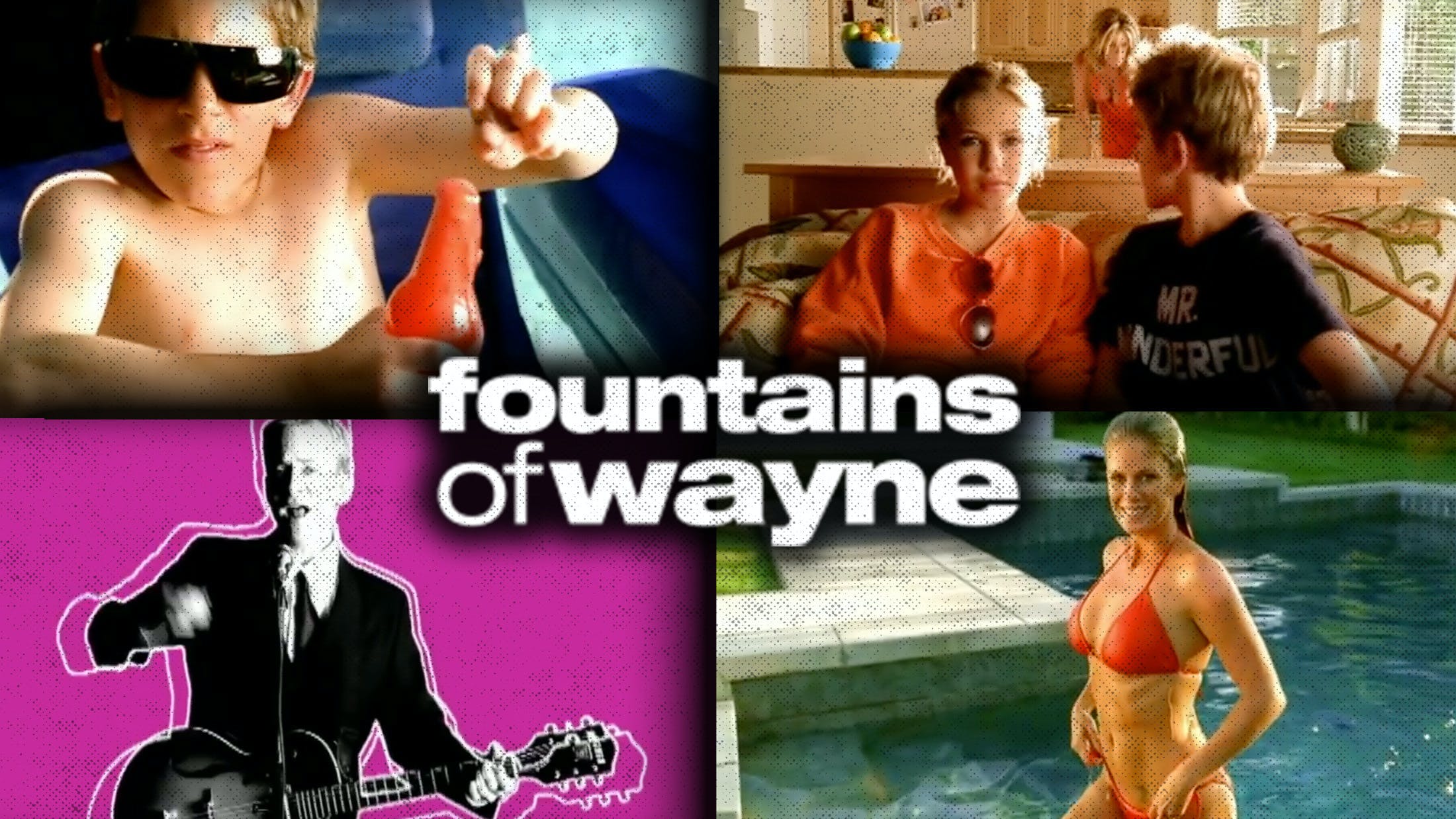 A tweet that went viral recently asked: 'What piece of pop culture has ruined your first name?', and for anyone called Stacy, this Fountains Of Wayne video is absolutely the answer. Since 2003, when this came out, nobody has met anyone named Stacy without making some sort of reference to having 'it goin’ on'. Even now, 17 years later, it’s a go-to.

That’s the power of, well, power-pop. This absurdly catchy, filthy, funny ode to teenage fantasties was an immediate hit, thanks in no small part to the over-the-top video.

Let’s dive right into that, shall we?

0.01
This opening is all but lifted from The Cars’ Just What I Needed, to the extent that frontman Ric Ocasek heard it and thought it was a sample. Ric reportedly never responded to a request to appear in the video, although it contains a few nods to him and his band.

0.11
The dude to the left in the leather jacket is dressed exactly like a young Ric Ocasek, i.e. excellently.

0.25
Fountains Of Wayne formed in 1995. This was their biggest hit, written by bassist Adam Schlesinger but credited both to him and vocalist Chris Collingwood. The pair did all their songwriting separately, but shared credits on everything they put out as Fountains Of Wayne to avoid arguments. The name Fountains Of Wayne came from a shop in New Jersey. Earlier names they used included Woolly Mammoth, Are You My Mother? and Three Men Who When Standing Side By Side Have A Wingspan Of Over Twelve Feet. Fountains Of Wayne, the shop, was seen in The Sopranos in 2001 (season three, episode five, Another Toothpick) and closed down in 2009.

0.34
Stacy is portrayed by Gianna Distenca, who has now left the acting industry and is now a fine artist and sculptor, studying at the Royal College of Art in London. She now uses the surname Dispenza.

0.41
The horn-crazed hero is played by actor Shane Haboucha, who has made guest appearances in big shows like ER, The OC and Monk, as well as voice acting as both Superman (in Justice League Unlimited) and Robin (in Justice League: The New Frontier).

1.02
That’s, er, an ejaculation gag. Several directors up for the job presented less-overt ideas, but the band preferred the no-nonsense treatment of one. "We looked at a lot of treatments and some directors were trying to be kind of arty and subtle with it, but Chris Applebaum went completely for the jugular," Adam told MTV. Chris also directed Rihanna’s Umbrella video, Miley Cyrus’s Party In The USA, and everyone in the world’s third favourite song ever, The Impression That I Get by the Mighty Mighty Bosstones.

1.22
Adam Schlesinger, outside of Fountains Of Wayne, was Oscar-nominated for Best Original Song for That Thing You Do, written for the Tom Hanks film of the same name. He also wrote a lot of the songs in Josie And The Pussycats and Crazy Ex-Girlfriend. The Nu-Wave magazine he’s seen on here is another nod to the Cars’ era.

1.38
There’s a movie called Stacy’s Mom, a 2010 low-budget comedy that seems to be based on the song yet not have permission to use it, which really seems like someone fucked up. Brittney Powell, who plays the titular mother, had a small role in That Thing You Do.

1.54
This guy, Matthew Felker, also appears in Britney Spears’ video for Toxic, where he’s a secret agent wearing a disguise of a nerdy guy or something. It’s a weird video. He’s now a documentary producer.

2.09
'Since your dad walked out, your mum could use a guy like me' is in all likelihood the greatest line ever written in any song ever.

2.14
The Roland Juno was one of the '80s most-used synths, and can be heard on tunes like A-Ha’s Take On Me, Last Christmas by Wham and Cyndi Lauper’s Girls Just Wanna Have Fun.

2.29
Stacy’s Mom herself is played by Rachel Hunter, a New Zealand-born supermodel who has been on the cover of Sports Illustrated’s Swimsuit Issue twice and Playboy once. She was married to Rod Stewart for nine years, and is the mother of two of his eight children. "We somehow convinced Rachel Hunter to star in our video, which is a very good thing," Schlesinger told the Washington Post. "She was a fan, she liked the song and the band, and she thought it was a good idea, and who are we to say no? She was absolutely perfect for it, she totally got the song and did the video in the right spirit."

2.34
Before approaching Rachel, the band wanted to get Paulina Porizkova to play the role. Also a Sports Illustrated swimsuit model, she was married to Ric Ocasek. Paulina has other rock connections – she is the subject of songs by No Doubt and the Rentals, and mentioned in a Sonic Youth track.

2.37
This sequence was shot first thing in the morning. "It was 7 a.m., and there was Rachel Hunter doing a striptease on the kitchen counter," Adam told the New York Times.

2.47
Hit Parader (parodied as Hot Parader here) was a real music magazine that ran from 1942 to 2008. Guns N’ Roses accused it of “starting shit by printing lies” in Get In The Ring (which also levels that accusation at, er, Kerrang!).

2.51
The entire sequence of Stacy’s Mom coming out of the swimming pool, walking through a sprinkler in slow motion and removing her bikini top is an homage to the 1980s teen classic Fast Times At Ridgemont High, in which Phoebe Cates does exactly that, soundtracked by… The Cars. Here’s the edited-for-TV version – TV in the 1980s was extremely low quality.

3.04
It’s a masturbatory fantasy in Fast Times at Ridgemont High as well, with Judge Reinhold’s character walked in on and shouting “Doesn’t anybody fuckin’ knock anymore?”

3.08
Hey, you know who this song isn’t by? Bowling For Soup. However, just like when Weezer got asked about Teenage Dirtbag (by Wheatus) so many times that they started covering it, Bowling For Soup heard so many people say that Stacy’s Mom was their favourite BFS song that they ended up doing their own version.

3.14
Note to anyone considering pleasuring themselves in someone else’s house: most people would not react with the joyous smile Stacy is doing here. Most people would get law enforcement involved.

Green Day frontman Billie Joe Armstrong has covered That Thing You Do! in tribute to Fountains Of Wayne's Adam Schlesinger.

Fountains Of Wayne's Adam Schlesinger Dead At 52 From Coronavirus

Adam Schlesinger, bassist and songwriter for Fountains Of Wayne, has died from coronavirus complications

Fountains Of Wayne Bassist In Coma With Coronavirus Symptoms