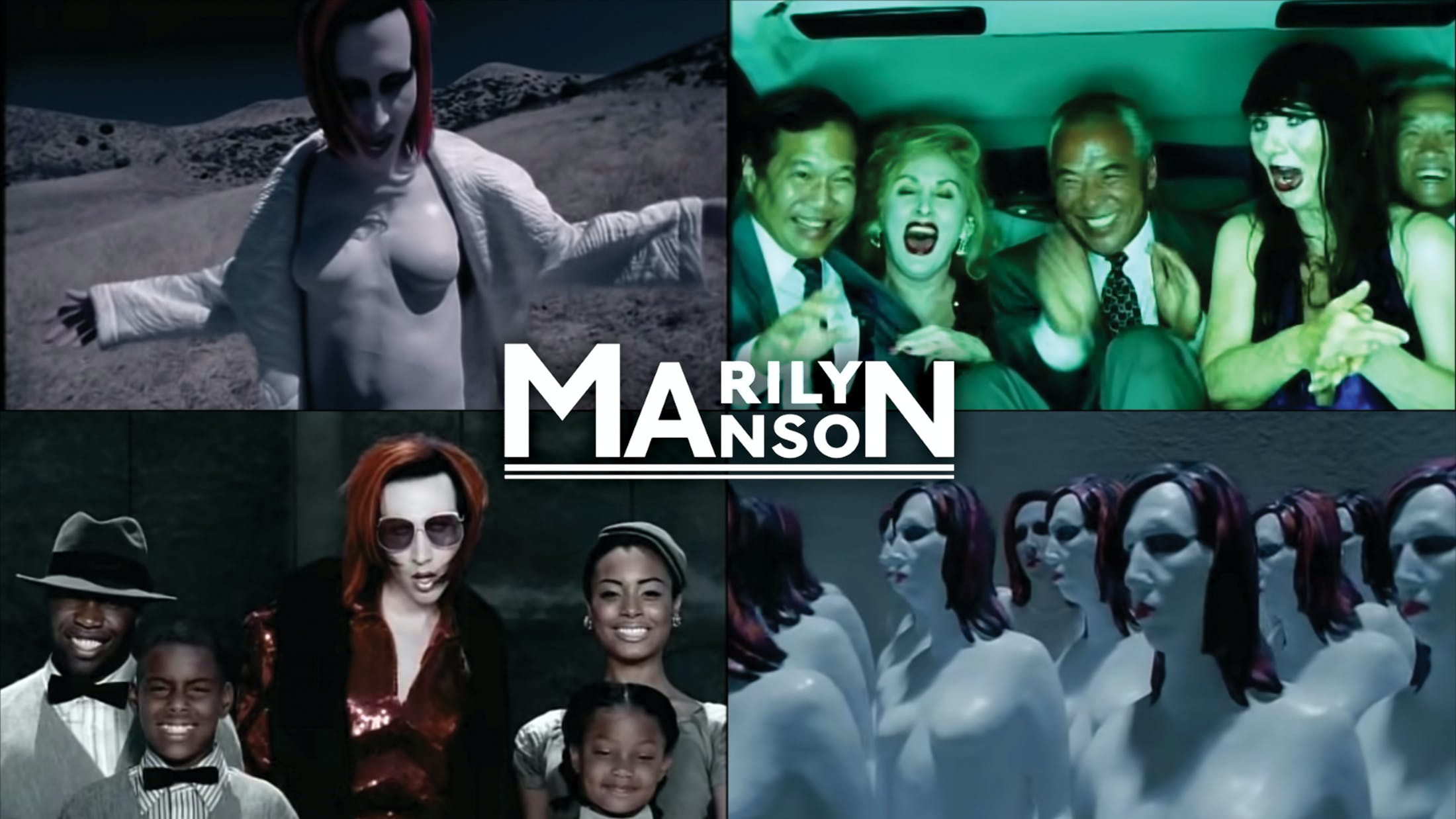 Marilyn Manson has managed to do a lot of pretty unlikely things. He’s reinvented himself musically and visually a bunch of times, all while still looking and sounding unmistakeably like Marilyn Manson. He somehow makes just as much sense screaming in his pants as in an immaculate three-piece suit. He’s an erudite speaker who sometimes wipes his bum in front of people. He’s both an incredibly hard worker and a pissed-on-absinthe show-off. Interesting dude.

1998’s video for Dope Show sees him at the height of his fame, when the world couldn’t take its eyes off him, everything he did was headline news and even your nan knew his name. Let’s dive on in!

0.01
There he is. Marilyn Manson, self-proclaimed God Of Fuck, weirdo/provocateur/ledge.

0.02
Two seconds in you know this is going to be an arty one.

0.05
These sequences, with Manson wandering around, are an homage to The Man Who Fell To Earth, Nicolas Roeg’s 1976 sci-fi classic starring David Bowie. They were shot in the Simi Valley, Ventura, California. Manson is in his androgynous, nipple-less prosthetics from the Mechanical Animals cover. Less Satany stuff, more glam-rock breasts. The prosthetics were made by Screaming Mad George, who also worked on Nine Inch Nails’ Closer and has made masks for Slipknot.

0.17
This fun building is The House Of The Book, part of the Brandeis-Bardin Institute. It’s a summer school, but because it’s a rad building, it’s also cropped up in Star Trek as a Borg headquarters and Mighty Morphin Power Rangers as the Command Center. Plus, it’s in flippin’ Tenacious D: The Pick Of Destiny.

0.37
A pun, there. 'We love in vain' is a little nod to one of Manson’s favourite subjects at the time, and the focus of a lot of Mechanical Animals: drugs. Another track on Mechanical Animals, The Great White World, was initially controversial as people thought it was racist. Manson had to point out that it wasn’t racist, it was about doing huge amounts of cocaine.

0.46
Fame being, as mentioned, another of Manson’s favourite subjects, this is a fairly explicit nod to the things people sometimes find themselves having to do to try to get ahead in Hollywood.

1.24
This is a recreation of a sculpture by German artist Rebecca Horn, who specialises in work that crosses the lines between sculpture and performance art, often incorporating a live human. The original is owned by the Tate, but is currently on loan to Museum Folkwang in Germany.

1.35
The colours in these outdoor shots, the kind of ‘daylight, but black’ effect, is the result of extensive tinting work on the film.

1.36
Another bit of Rebecca Horn sculpture there – Cornucopia: A Seance For Two Breasts, also owned by the Tate.

1.37
That is Billy Zane, of The Phantom (way underrated), Back To The Future (arguably the greatest film ever made), Titanic (if you can watch the bit where the two old people hold hands and prepare to die you are a FUCKING ROBOT) and Tales From The Crypt: The Demon Knight (solid) fame.

1.38
The National Interrogator is, of course, a play on the infamous tabloid The National Enquirer. One of the headlines on the magazine is 'Paul Hunter Secretly Weds Siamese Twins' – Hunter co-directed this video with Manson. He also made previously-dived-into videos for Drowning Pool’s Bodies and Deftones’ Back To School, and made a bonkers 21 music videos in 1998 alone. While the vast majority of music videos are shot over one or two day, this one madly had two weeks, which, to everyone’s credit, does show – there’s a lot going on in it.

2.16
You only see him very, very briefly, but the fan trapped under the cop’s pink legs and reaching out manically to try and touch Manson is played by the guy who played the pizza delivery boy in Home Alone. The internet is fucking amazing. He also played a vampire in From Dusk Til Dawn.

2.17
The bits with the live performance were shot in downtown LA, in front of the LA Traffic Court building. With Manson are his band (also called Marilyn Manson) – Ginger Fish, Madonna Wayne Gacy, Twiggy Ramirez and Zim Zum.

2.43
No countries have pink police uniforms, which seems a shame as these cops look fabulous.

2.58
The whole sequence with umpteen Manson replicas is an homage to Alejandro Jodorowsky’s The Holy Mountain, a total mindfuck of a film. Jodorowsky is in turn a fan of Manson’s, writing that he “sensed genius” in him.

3.06
Fun YouTube comment: “This scared my grandma so much it made her cry. I wish I hadn't shown it to her now. I was a stupid teenager. I assumed she would think it was awesome because I did.”

3.39
This is Goddess Bunny, a really interesting figure who also pops up in the videos for Cypress Hill (featuring Dr Dre)’s Puppet Master and Billy Talent’s Fallen Leaves. She had an extraordinarily difficult life, overcame a lot and became something of a legend in LA’s drag scene, a tall-tale spinning, larger-than-life character. Here’s a great interview with her.

3.55
And there we are. Are we all stars? Marilyn Manson manifestly is. Well done, Mazza.