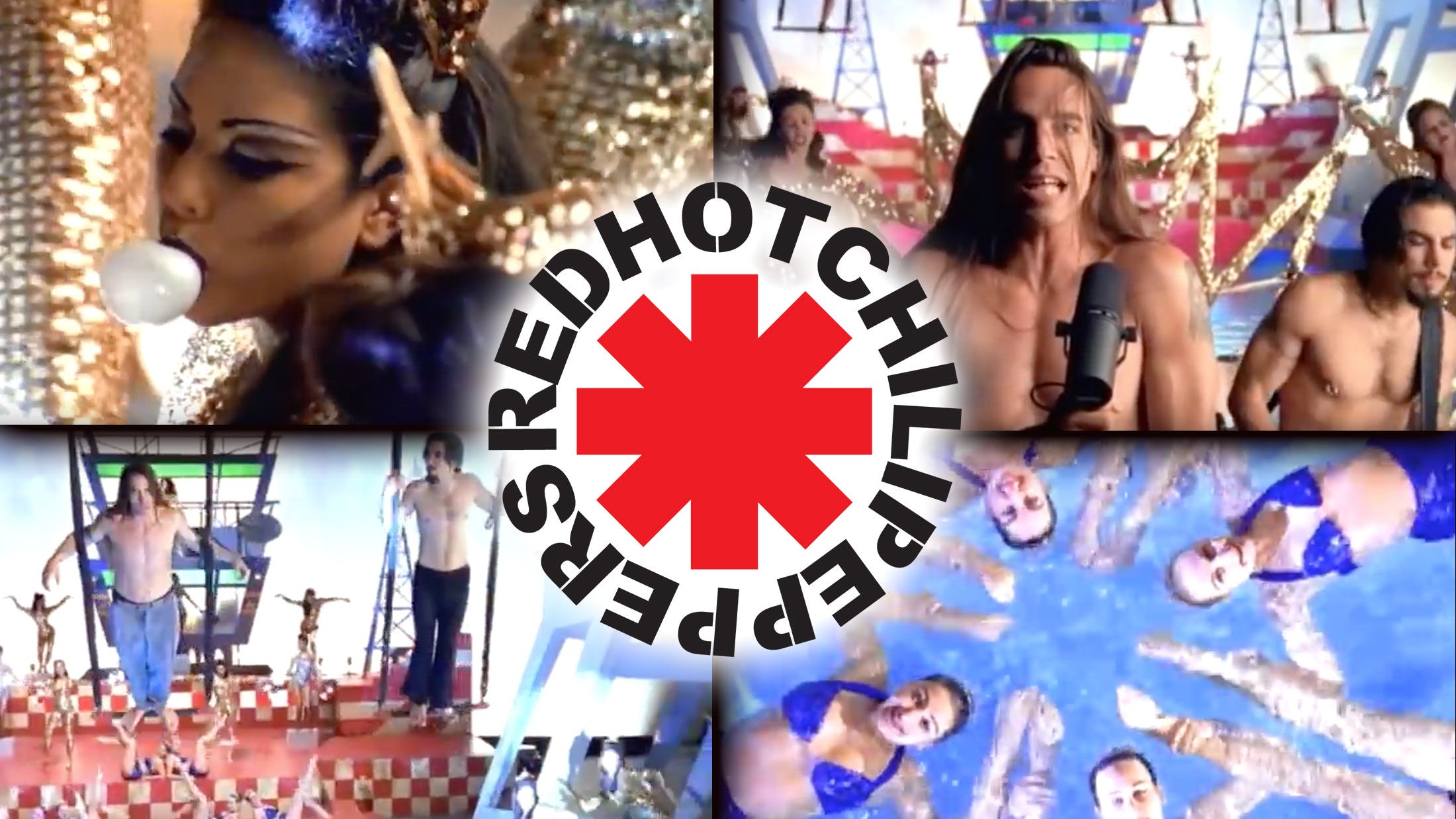 Few bands polarise like Red Hot Chili Peppers. For everyone whose life was forever altered for the better by hearing them, and who view them as funk-rock gods, there’s at least one person who sees four ageing, shirtless men making thunking noises and mentioning California in too many songs.

1995’s One Hot Minute contains slightly fewer mentions of the Golden State than some of their latter day output, but that’s not the reason it’s held in lower regard by hardcore Chili-heads. It’s the only album to feature guitarist Dave Navarro, better known for his work with Jane’s Addiction and somehow influencing what a generation of bad magicians look like. He joined after the departure of longtime member John Frusciante, whose subsequent re-joining (after One Hot Minute came out) led to Navarro’s sacking and the whole era being slightly Tipp-Exed from the band’s history.

The album still exists though, and polarises fans – that’s right, the band polarise everyone, and this album polarises their fans. So much polarising. But, while devout fans of the John Frusciante line-up might scoff at this era, it did produce funk-rap-rock’s best semi-aquatic video tribute to the Golden Age of Hollywood. Goggles on!

0.02
Two seconds in, and look how glamorous everything is. Director Gavin Bowden wanted to combine a Las Vegas showgirl look with hair and makeup inspired by the women he saw living around him. “I lived in East Hollywood at the time, a very mixed cultural place, with all of these cholo girls hanging out on the street. I thought the way these girls looked and made themselves up was insane. I was like, ‘Let's have the dancing girls, but instead of being very exact and clean-cut, let’s give them crazy makeup and glitter suits.’”

0.05
Bubble gum was patented in 1928 after a modified chewing gum recipe proved stretchier than anticipated. The largest bubble ever blown measured 66cm in diameter, and was blown by Susan Montgomery Williams in California in 1996, the same year as this song came out.

0.09
The look of this whole video was inspired by Busby Berkeley, a Hollywood director and choreographer famed for his work in the 1930s and 40s often involving elaborate sets, big musical numbers and showgirls arranged in compliex geometrical ways. The gold bodysuits are specifically a nod to his film Million Dollar Mermaid, in which actress Esther Williams wears a head-to-toe outfit made of 50,000 sequins.

0.16
It’s a much bigger, flashier, more Hollywood-looking production than Red Hot Chili Peppers fans were used to. Their biggest videos up until this point involved them gyrating in the desert (Give It Away) and just sort of walking down a road (Under The Bridge). Anthony Kiedis has described Aeroplane as his least-favourite RHCP video.

0.21
Flea there, Australian-born founding member of Red Hot Chili Peppers, and crucially, Douglas J Needles from the second and third Back To The Future films.

0.26
Anthony Kiedis, there – a man who has dedicated his life to doing a very annoying thing where he refuses to wear a shirt, but completely gets away with it because he looks like Anthony Kiedis. He’s a sexy dude, is Anthony Kiedis – he’s admitted to there being multiple years of his life where he would sleep with over 100 different people.

0.28
That’s a big-ass set in a big-ass room. “All of the stuff in the video was designed and built – there’s nothing rented in there” says director Bowden. “It was shot on the oldest soundstage in Hollywood, at Universal, where they keep the Phantom of the Opera set.”

0.41
The trapezes are further Busby Berkeley nods – trapezes are used in both Easy To Love and Million Dollar Mermaid.

0.43
There were rumours at the time that the record company had insisted on a video with hot women in to ‘make up’ for the band’s two preceding videos – My Friends and Warped – having mildly homoerotic undertones. My Friends was a sad nice one about looking after one another, while Warped was a big noisy cacophony accompanied by the band wearing PVC and kissing.

0.59
Look, there’s Dave Navarro, who looks like the Russian doll inside Khal Drogo. When he was asked to join the band, the rest of them refused to accept him as a member until he showed them his penis.

1.11
Aaaaaand another Berkeley nod – a line of women dive sideways into a pool in his 1944 films Bathing Beauties.

1.15
The synchronised swimmers are a professional water ballet team from the Inland Empire, Southern California. “Just to use the swimming pool was, I think, $25,000” recalls Bowden. “It meant we couldn't afford to heat it because it was too expensive, so that water was freezing - those poor girls.”

1.52
There were butted heads during the making of this video, as Kiedis and the band wanted to make something a lot more sexually provocative. “We wanted to go kind of hardcore with the tits and the ass,” said Kiedis. “Not in an exploitative way, but just in kind of a beautiful way, showing the extreme power and beauty of the female form and all of the energy within. But there was a woman working at Warner Brothers who was just so not into it. She was like, ‘No, no, you can’t use a woman like that.’ I was like, ‘Come on!’ It wasn’t out of a lack of respect, it was out of a love for sexual energy and all this stuff. She fought it and we kind of ended up somewhere in the middle. It was supposed to be a lot more racy and kind of sexually challenging than it ended up being because of this dispute, which is kind of a drag.”

1.55
They’re pretty strange trousers Kiedis is wearing, aren’t they? They’re like smart office trousers but silvery, like something Dr Evil might have worn to his interviews at Evil Medical School.

2.01
The choreography was worked out in close to real time by choreographer Keith Young, with minimal rehearsal.

2.02
Drummer Chad Smith there, famous for his resemblance to Will Ferrell and excellent middle name Gaylord. Smith hated this video, turning up on set and shouting, “Fuck! It looks like a dog food commercial!”

2.28
Typically, 'aeroplane' is how British people would say the word, while Americans would opt for 'airplane'. The inspiration for the line came from an old blues song, Jesus Is My Aeroplane.

2.49
Busby Berkeley’s 42nd Street contains a shot very similar to this one, where chorus girls’ legs are used to create a kind of kaleidoscope effect.

3.12
Some trademark gurning from Flea, who regularly spends live performances contorting his face and waggling his tongue like a madman.

3.16
Kids! There are loads of children here all of a sudden, dressed like planes, making the lingering close-ups of women’s bottoms a minute or so ago seem all the worse. The children are Flea’s daughter Clara’s pre-school class. You can totally see them looking at the off-screen choreographer copying his movements, it’s cute.

3.26
There’s Clara, with the red hair. She is now in her thirties and works as a photographer – she took the promo photographs for the band’s 2011 album I’m With You. Flea has spoken very movingly about being a father, saying, "It's funny how you always hear people saying that classic parent attitude of, 'I brought you into this world, I gave you life!' You know, it's just, I think, completely the opposite. My kids gave me life. They gave me a reason."

3.33
At this point the album version does a much longer bass solo, but that was dropped for the single release.

3.39
“You know, it could have been really cool and I don't think we quite got there,” says Chad Smith of Aeroplane.

3.47
As if the band weren’t already unhappy enough with the video, one of them fell off a trapeze. They were persuaded to have a swing by the director, who recalls saying, 'I know you said you didn't want to do anything goofy, but would you please stand on the trapeze?' A few swings later, there was the sound of a breaking rope and a Red Hot Chili Pepper fell 20 feet into the freezing pool. (Listening to behind-the-scenes audio, it sounds like it was Dave Navarro who fell, but it might not have been.) “Needless to say, I never worked with them again,” says Bowden.

3.57
It is weird, isn’t it, going from an adorable choir of kids to a leery bum shot?

4.07
There you go. They ended up not performing Aeroplane, or any songs from One Hot Minute, in concerts for a good 20 years or so afterwards – not because of this video so much as the aforementioned Tipp-Exing of history, but they’re at ease with it now and occasionally bust it out. Of the video, Flea sums it up, “I think this video has some really good parts of it that are grandiose and good, but I think we tried to do too much. There’s a little bit too much stuff in it.”