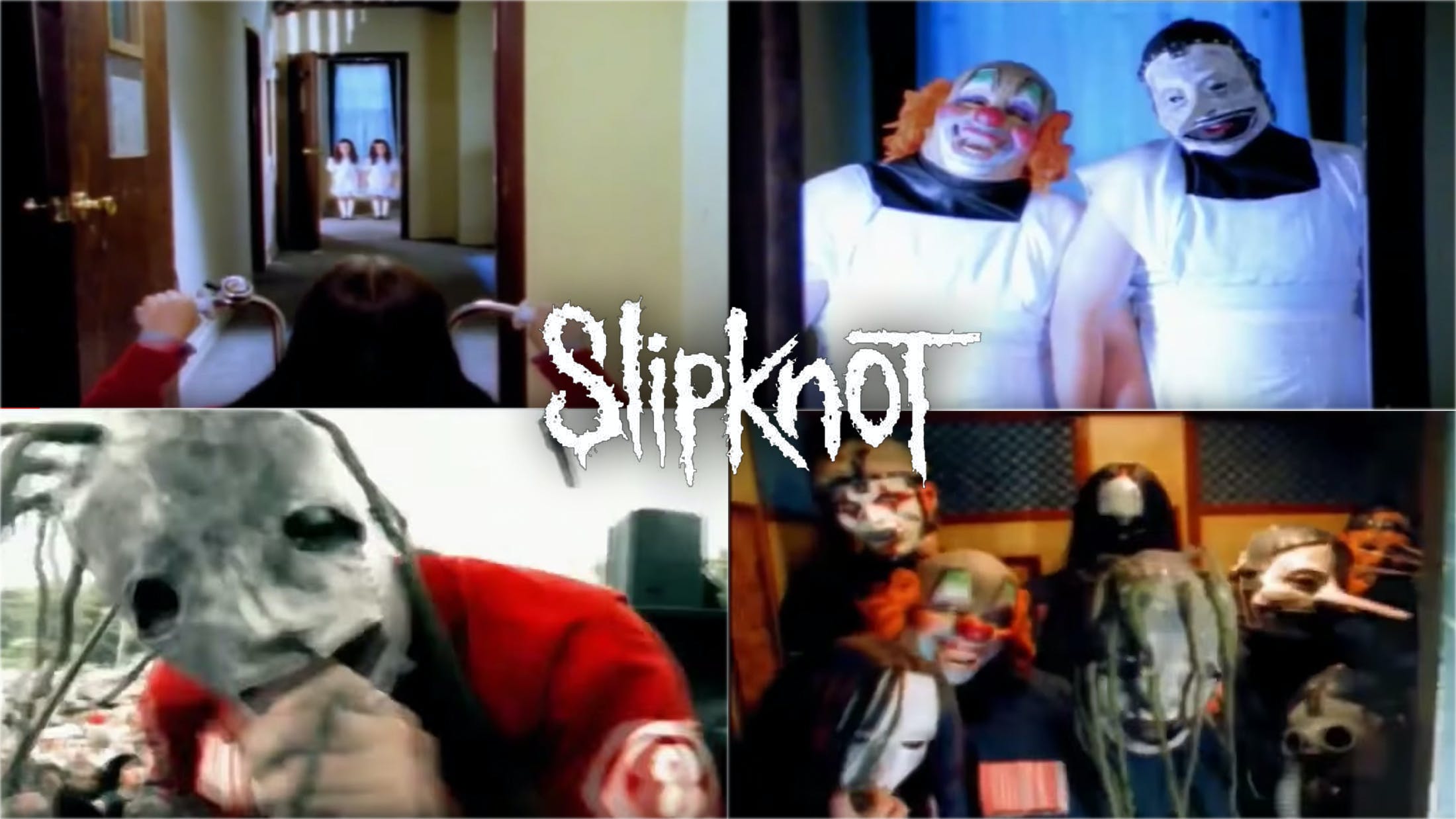 0.01
Hey, have you seen The Shining? Director Thomas Mignone has! This is a nod to one of the film’s most famous moments, when REDRUM is seen reflected in a mirror, as MURDER. Mignone has also made videos for Mudvayne, System Of A Down, Ozzy Osbourne, Suicide Silence, Avenged Sevenfold, Sepultura, Danzig, Cradle Of Filth and loads more, as well as writing and directing the extremely bleak movie On The Doll and helping to develop HBO’s The Deuce.

0.06
Ah, so what’s likely to be happening here is a pretty faithful remake of Stanley Kubrick’s movie of Stephen King’s book The Shining. All seems pleasant enough.

0.14
It’s fucking creepy, Jordison’s expressionless kabuki mask. When you see him going apeshit behind a kit, that plastic stare is really unsettling. Jordison left Slipknot in 2013. The band’s current drummer, Jay Weinberg, was ten when this video was made. Madness.

0.19
That is, of course, Shawn 'Clown' Crahan and Chris Fehn as the Grady twins, although Fehn isn’t on the audio track – he joined between the recording and the video shoot, and it’s previous drummer Greg 'Cuddles' Welts you can hear. Fehn left Slipknot last year.

0.20
Corey flippin’ Taylor, there: bestselling author, one of the funniest dudes in music and the loudest guest in QI history. This was the first song Slipknot wrote after Taylor joined the band, replacing Anders Colsefni.

0.25
Definitions vary, but Taylor is pretty much rapping on this. He credits his love of H.R., legendary frontman of Bad Brains, for his delivery here, telling Fader: “People have always tried to push us into the nu-metal thing. They've also tried to include us in with the American wave of heavy metal because of how aggressive we were. I mean, we've had some blatant hip-hop, not even the fucking nu-metal side, but blatant hip-hop. [...] People don't realise [Spit It Out] is a hardcore song. That's me channeling H.R. and everything that I grew up listening to, and just spitting as hard as I could.”

0.30
As the faces of every one of these fans can attest, Slipknot live is a fucking extraordinary experience.

0.37
Taylor is playing Jack Nicholson’s role of Jack Torrance, while that’s Mick Thomson as Lloyd, the ghostly bartender. Thomson once got in a drunken scrap with his brother that saw him get stabbed in the head and both of them get arrested. He seems like a pretty intense dude.

0.40
Taylor is doing a very good job of impersonating Nicholson, especially considering he’s both wearing a mask and only seen in brief one-second cuts.

0.51
Corey Taylor does at least two things better than anyone else: getting ‘full crazy’ across with most of his face hidden and switching between singing styles effortlessly. Watch any live Slipknot video and he just makes it look easy, sounding almost like two people singing across one another sometimes. It’s almost unfair: most of us don’t even have one great voice, and he has about six.

1.03
That’s the late Paul Gray, who tragically died in 2010. The spinning padlock nose thing never gets any less than ‘incredibly unsettling’.

1.15
Craig Jones channelling Scatman Crothers’ Dick Halloran, there. Kudos to the props department for a blink-and-you’ll-miss-it gag suggesting Jones is a real weirdo – in The Shining, the pictures above both Halloran and the television are of half-naked women, while here they’re of a sheep and a pig.

1.45
The most famous scene from The Shining (and if you haven’t seen The Shining, aw yo, see it, it’s great) involves Jack Nicholson smashing through a door with an axe, just like Taylor is doing here, followed by the famously improvised line “Heeeere’s Johnny!”

1.49
This doesn’t necessarily seem like a song that would easily translate to a one-man acoustic performance, but things being difficult has never stopped the owner of rock’s strongest neck doing anything. Here he is playing it in a bookshop to a completely arrhythmic crowd.

1.49
Remaking a really disturbing film with a bunch of dudes that are reasonably unsettling to look at at the best of times is kind of an odd idea, but hey, it’s working. This is Sid Wilson as Lorraine Massey, the woman in the bath who transforms from young and beautiful to dead and monstrous and possibly fucked a whole load of young people up sexually.

1.56
There’s the “Heeeere’s Johnny!” bit. Hey, you know who was on set while this video was made? Ice flipping T. Chris Fehn later told SongFacts: “The video that we did for Spit It Out, Ice-T showed up, so it was rad, dude. We got to meet Ice-T, and he hung out on the video shoot and everything and took pictures with us. That’s the coolest thing. Otherwise, they suck, dude. It’s so boring. Like, you play the song a million times, you know, and you can barely hear it through these stupid little monitors they give you. It’s just such a long, drawn-out day that it’s tough. So videos blow.”

2.00
Here’s Jim Root as Wendy Torrance, portrayed by Shelley Duvall in the film. Root isn’t on the recorded version of the song either – previous guitarist Josh Brainard is. Root wasn’t a fan of his early masks, and these days sports such an enormous, magnificent beard that this mask simply wouldn’t get on his damn head.

2.12
At this point in a live performance, Taylor will generally instruct the audience to all get down on the ground, then repeat the bridge, replacing “So good enough, had enough” with “JUMP THE FUCK UP!” and everything goes bonkers. A live version of this song can easily be seven, eight minutes of amazingness. Best fucking band.

2.20
You know who likes this song a lot? Met-flippin’-allica. Corey told Rock Feed about a time when the whole band came out and joined Slipknot on stage in 2004 or so, during an outdoor show in which they had to compete with the World Cup: “There’s a gigantic screen just perpendicular to the audience and everyone’s kinda watching us – at the time it was hard to ignore us – they’re watching us, then they’re watching the goal, then they’re watching us, then they’re watching the goal. Now, we get to the sit-down on Spit It Out, and all of a sudden, from the wings, here comes Metallica, all of their crew, all in masks, and Lars immediately jumps on the drums, James is just standing there watching everything, we get everybody down and then all of a sudden everybody jumps up. Watching Metallica do it with us man, it was such a great bonding experience.”

2.58
And that’s your lot. The total swearing tally? Three shits, nine fucks, three bitches, two asses, one cock, one dick, one piss, one damn and one tit. Not actually that bad. Well done everybody.