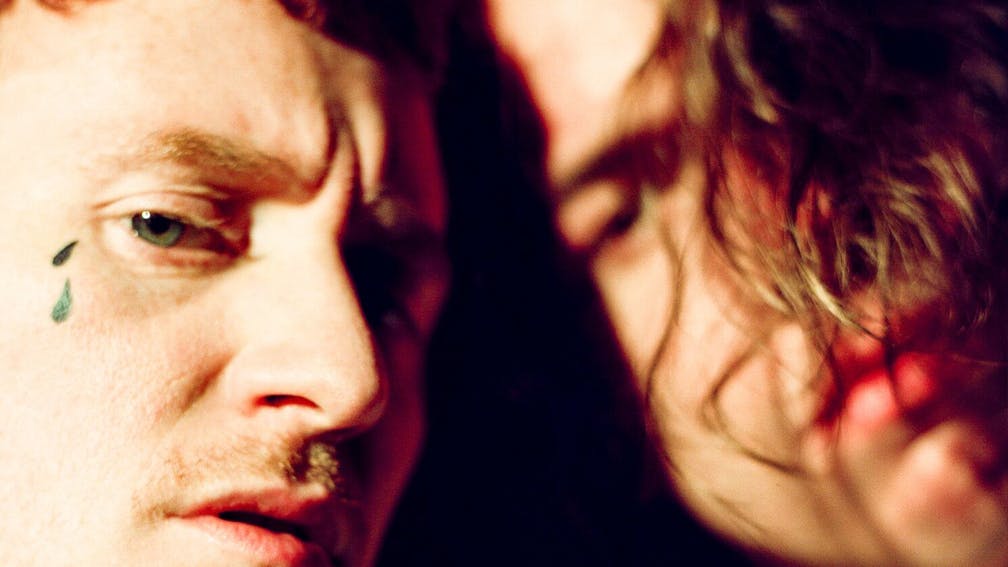 On a surface level, that album title, much like Bring Me The Horizon’s That’s The Spirit, seems loaded with irony. Frank Carter, as much as anyone, knows that life is pain, filled with disappointment and disenchantment, where those fleeting feelings of joy inevitably give way to a persistent sense of unfulfilment. As a younger man during his time in Gallows, that gnawing sense of dissatisfaction made Frank, in his own words, “a ball of fucking rage and sulphur, abuse and nihilism”. That band’s defining work, 2009’s stunning Grey Britain, saw him railing against ‘scum’, lashing out at ‘leeches’, and announcing, on Misery, ‘I want to kill myself just for relief.’ A decade on, he’s still here, bloodied but unbowed, still seeking liberation, but asking questions rather than demanding answers.

The core question is posed in Love Games. ‘If life is a losing game,’ he muses, ‘then why do we play it again and again and again?’ The answer, underpinning each of the 12 songs on this third collection from the Hertfordshire group, is hope; the possibility of magic and love, the desire to be seen and understood.

End Of Suffering is the work of an artist in transition. Kitty Sucker opens with the words ‘I’m a punk rock renegade’, an open admission that Frank won’t be bound by old rules, and the Rattlesnakes’ third album is all the richer for the rejection of punk orthodoxy. The aforementioned Love Games owes more to the bruised soul of Amy Winehouse’s Back To Black than Black Flag, while the haunting Angel Wings, calling to mind the dark dread of Portishead or Massive Attack, also aches rather than antagonises. ‘I am collapsing under everything I’ve known,’ Frank admits. ‘Where do I go from here? Where will I run?’ The title-track, meanwhile, is even starker, carrying some of the gravitas of Nine Inch Nails’ Hurt, with the frontman’s plaintive melodies underpinned by sparse piano and snare rimshots. A nakedly emotional love song for his daughter, it might just be the most beautifully affecting piece of songwriting to which he has ever put his name.

There are still flashes of the old Frank Carter here, not least in the swinging belligerence of Crowbar, where the singer points a finger at haters, ‘those jealous motherfuckers [who will] try to take your crown,’ and gleefully concludes, ‘fuck ’em all, they don’t tell us who we are, so when they try to lock you up, go and get the fucking crowbar.’ Tyrant Lizard King, on which the Rattlesnakes are ably assisted by Rage Against The Machine guitarist Tom Morello, swaggers like early Nick Cave, while the stop-start riffs of Latex Dreams are reminiscent of Royal Blood, with Frank in unapologetic form as he declares, ‘They all say that I’m bad, bad luck… I don’t give a fuck.’

Beyond Frank’s knowingly cartoonish braggadocio, however, End Of Suffering is art made by a man who is increasingly comfortable in his own skin. Perhaps the album’s most telling three minutes is the song Anxiety, which opens with the vocalist conceding, ‘I don’t know who I am,’ before exploding into a glorious, widescreen chorus in which he concludes, ‘There’s a better place for you and me, where we can be happy.’ The 34-year-old may not quite have reached nirvana just yet, but in his personal quest for enlightenment he’s never sounded more optimistic about life’s possibilities.

Frank and Dean have teamed up with ‘eco-friendly’ NFT platform Serenade for the launch of Vita Brevis – the first in a collection of NFTs by the pair.