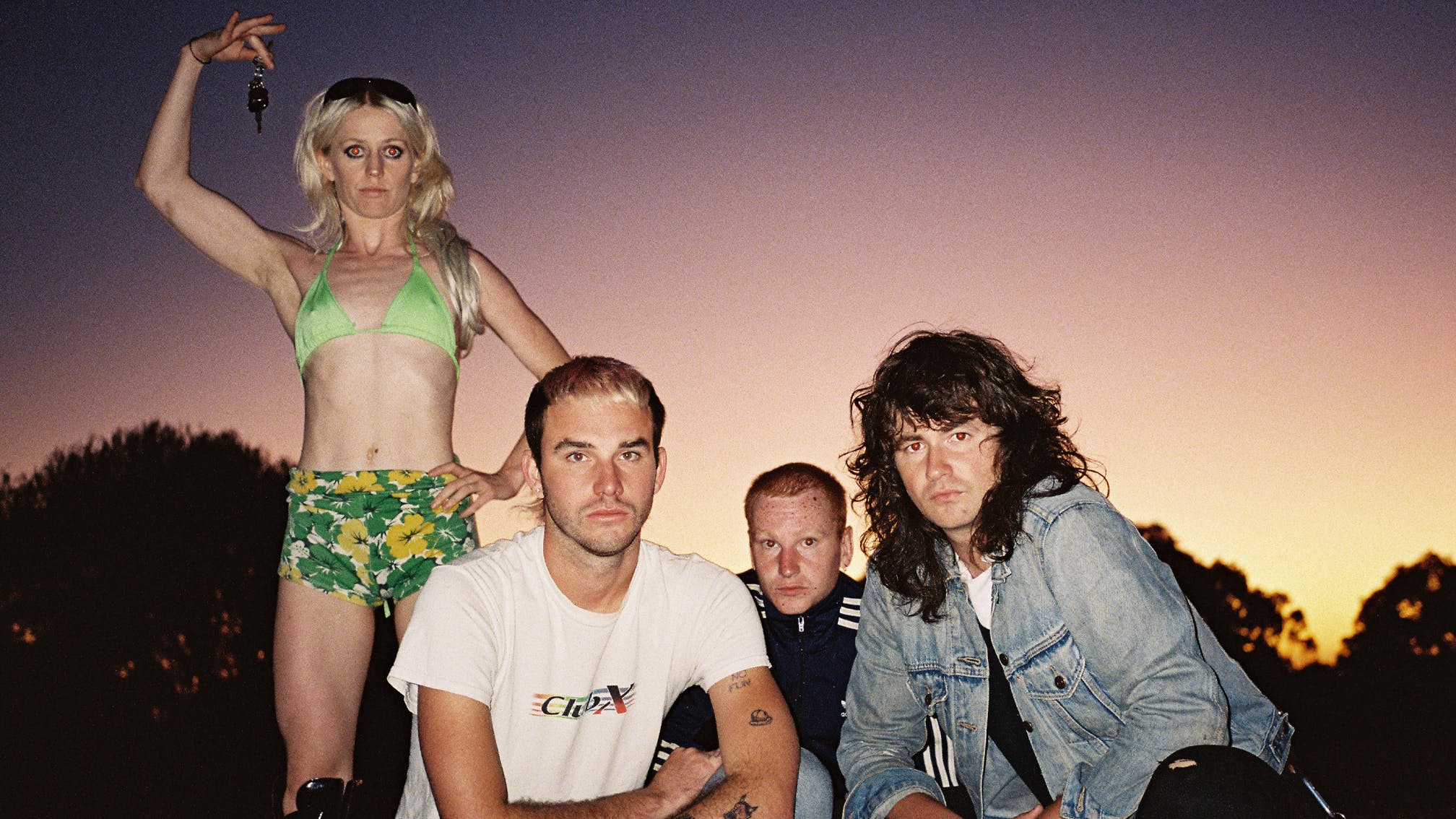 It’s yet another measure of how cruel and unfair the ongoing everything is that we’re forced to make acquaintance with Amyl & The Sniffers behind the benign prism of computer screens. The band who wrote and lived by the credo of 2018 single Some Mutts (Can’t Be Muzzled) shouldn’t be logging into video conference calls to field asinine questions in the name of press promotion. Not even from Kerrang!. It just doesn’t feel right.

Yet here they are, across many miles, a couple of time zones and the wonders of the ones and zeroes that power all of this technological wizardry, talking about their upcoming new album, Comfort To Me. To their credit, they’re endearingly chipper, even if they are all dotted around various homes Down Under, relying on unreliable wi-fi and trying to make the most of an imperfect situation.

“You just gotta do what you gotta do, eh?” offers the dry, ever-stoic guitarist Dec Mehrtens. “It’s all so fucking fucked.”

But remember when it wasn’t? As emphatically stated by Kerrang! in 2019, Amyl were one of the hottest live bands in the world. They may well still be. The frustrating stasis around that kind of thing means that all we really have to go on are memories for now. But what memories. For the first time in a long time, here was that rarest of musical breeds, genuinely best appreciated in the confines of a dingy bar where it felt like there was nowhere to hide from the wailing garage-rock discord, paired with the faint threat that anyone in the line of sight was fair game. As the self-titled Rough Trade full-length debuted and delivered on an ocean of hype and momentum, we giddily crowned them kings and queens of the new alternative crop. It wasn’t just us smitten either. They won an ARIA award, had Coachella on the horizon and were due to open stadiums on the Hella Mega Tour with Green Day et al. Two years on, they’ve barely played a note in anger since. Not in front of people anyway. Instead, they went back to Melbourne and spent the best part of last year sharing a shed. Yes, a shed.

“We were renting together in Melbourne before the pandemic hit,” vocalist Amy Taylor begins to explain. “So, we just continued living together through most of it. It was this tiny three-bedroom place, but obviously there's four of us, so we each took turns sleeping in the shed.”

Understand that this was not some fancy, tricked-out George Clarke’s Amazing Spaces-type shed. This was the bug-ridden – Aussie bug-ridden – dirt and dust-filled, garden tools-dwelling kind.

“It was absolutely fucking rubbish,” she assures us, in no uncertain terms. “You’d sleep on this hard floor with a million cockroaches and fuck knows what else. I tried to make it a bit nicer, but I kept finding worms in my drinks and stuff, so that was crap. Eventually, I was like, ‘I've got to get out and get my own room.’”

Understandably so. And thanks to the invaluable financial support of the Australian government’s JobKeeper scheme, she did. It even has house plants and everything.

“The money’s running out soon, but it was nice while it lasted,” Amy says laughing. “It was basically the most money any of us have ever made. It was fucking awesome. I was buying linen sheets and shit.”

Domesticity and creature comforts are all well and good, but eventually, all that unspent energy must manifest itself somehow. The band had, after all, already started working on their second record way back in November 2019. They even made demos for the first time, because so much was riding on replicating their debut album’s success and proving they were the real deal. And then the world fell apart.

“I went mad,” Amy confesses of her time in lockdown. “I mostly worked out heaps and painted, wrote lyrics and fucking whinged. I had mental breakdowns because I’m a hyperactive person who needs constant productiveness and stimulation. So, I definitely lost the plot, but we good. We made it.”

“COVID made me more sane,” quips Dec. “I've ended up becoming so boring. I've even quit drinking now, and that's added to the boringness. I went pretty hard. After weeks of heavy drinking, I vomited heaps and started crying. I actually cried. Now I’ve got almonds for the booze cravings.”

Clearly, Amyl & The Sniffers – completed by drummer Bryce Wilson and bassist Kevin Romer – are a band made for the road, built to roam free and attack stages every night. All this normality and time spent cooped up isn’t good for them (although Dec’s liver might disagree). And yet, suddenly, like everyone else, they had been gifted all this extra time. That was time spent taking a breather, reflecting on their adventures, and making deliberate, informed decisions about how this record should shape up. They even wrote more songs than they needed, with only 13 of the 20-plus making it. Listen back and it shows, too. Comfort To Me is still scruffy punk rock at heart, but now there’s some polish in place of the scuzz. With more time to think came a curious new set of considerations, too. No longer were they a bunch of misfits furiously demanding the world’s attention. Now they had it.

“I really like that people know my name and think I’m cool and stuff, but it's definitely weird,” Amy admits. “It freaks you out. I remember when we were at the airport, and a bunch of school kids were looking at us and giggling because we were the weirdos.

“The easiest option would be to just bail on this and go work at a supermarket because it's confusing and foreign and strange,” she adds. “But I'd rather just be a weird, C-grade celebrity and see what happens.”

And those giggling kids? Turns out they were nervous fans who’d recognised the band in an unlikely and unexpected setting, too shy – or possibly scared – to approach them. Nothing as sinister as first feared. But assuming they must be the butt of a joke reveals a lot about the default Amyl mindset, and why they are how they are. Their customarily feral, onstage ferocity is a far cry from the four polite and friendly faces staring out from screens today. They’re actually quite sweet. And it doesn’t take a professional psychologist to draw a line from that aggro front to find hurt at the root of it all.

“Yeah, I reckon you’re right,” the singer nods. “I’m always super defensive, like, ‘What the fuck, c**t?’ I always think someone's gonna bash me or rob me. So, I'm always on edge. But I'm so psycho because I’m so scared. That’s why I sleep with knives next to me, in case someone tries to murder me. It's not nice, but people aren't just born tough. It's a reactive thing; to environment and experience.”

That’s right – Amy sleeps with knives next to her at night. It figures. There’s probably a ton of stories and legitimate reasons for it, too. But those are likely better suited to the pub someday. With that in mind though, the words of new song Security take on an almost melancholic quality. ‘I’m not looking for trouble, I’m looking for love’ she sings, and it makes you wonder if under all that ‘don’t mess’ bravado there might be a big softie, as vulnerable as anyone else is. Then again, the track Don’t Need A C**t (Like You To Love Me) would suggest you run that theory by her at your peril. She loves the contradiction regardless.

“I'm just a human being with a full-blown spectrum of emotions and reactions,” she shrugs. “With some people I’m like, ‘Don’t need you’ but with others it’s like, ‘You better love me! Because I fucking love you…’”

She says this with a massive grin and a slightly wild glint in her eye – the kind you used to see mid-performance all the time – that makes us almost grateful for the video conference call and the safety of distance.

Pretty soon, with all being well, they’ll be able to run amok again though. And the prospect of the Sniffers making up for lost time and reclaiming all those stolen experiences from the past 18 months or so is a frightening one.

“I know as soon as we get back to playing I'm going to go crazy, pretend that the pandemic never existed and do all the partying that I was owed,” promises Dec.

Amy, on the other hand, is much more sanguine. At least for now. The moment she hits the stage might be a different story.

“I don’t feel like we’ve been ripped off or anything,” she insists. “We’re so lucky as a band. Life gives you experiences either way. They’re just different right now. Plus, there's enough stuff on the horizon that it doesn't feel completely bleak yet. I've got hope that all the sick stuff that was gonna happen will still happen.”

These mutts might be somewhat muzzled right now, but rest assured they’ll be free and let off the leash again shortly. The time for exercise and domestic bliss will soon be over. With Comfort To Me right around the corner, chaos is coming.

Comfort To Me is due out on September 10 via Rough Trade (UK / Europe), ATO (North America) and Caroline (Australia and New Zealand)

Up first they’ve got the UK and European Hella Mega Tour, but then Amyl And The Sniffers will be returning to the States later in the year…