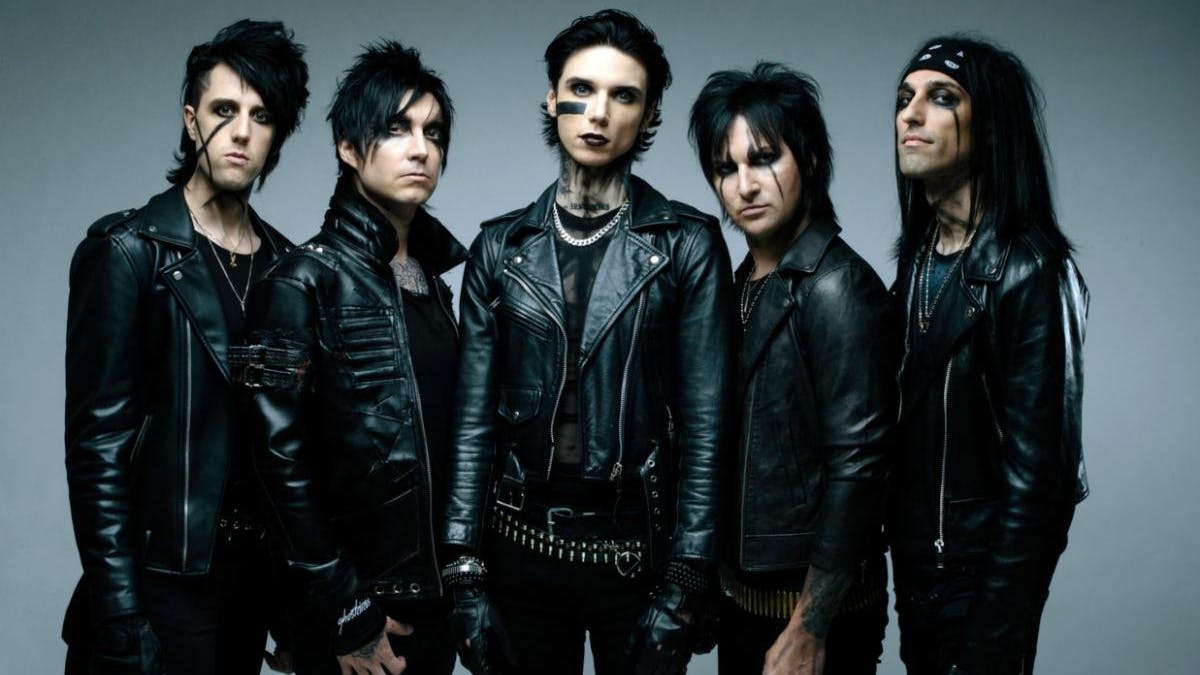 From the outside looking in, things seemed pretty quiet on the Black Veil Brides front in 2019. Frontman Andy Biersack’s experimental solo album and comic book had been occupying much of his time, and, up until last week, fans were wondering when they’d hear the vocalist return to the hard rock stylings of his day job.

Then, on November 29, the band made an almighty comeback, dropping two new singles – Saints Of The Blood and The Vengeance – collectively known as The Night, out of the blue, along with a video to accompany each track.

Moreover, as well as signing with Sumerian Records, Black Veil Brides revealed that the man to replace bassist Ashley Purdy – whose departure was announced earlier in the month via a short statement on the band’s social media – was Lonny Eagleton, a long-time member of the BVB Army and friend of their frontman, who’d previously toured with the Andy Black project.

READ THIS: How I wrote In The End, by Black Veil Brides' Andy Biersack

And the debut release from this new line-up won’t be the last of its kind. In fact, the quintet have discussed a series of ‘duologies’, whereby they’re seeking to create successive album campaigns based around pairs of songs (hence the name), rather than full-length records.

To get all the info on their grand new plans, Kerrang! sat down with Andy to talk music, the impact of their line-up change, Black Veil Brides’ plans heading into 2020, and much more…

When did you start work on these new Black Veil Brides songs, Andy?
“Elements of these songs pre-date me meeting Jinxx [guitar] and Jake [Pitts, guitar]. The guitars on Saints Of The Blood are one of the first things I ever heard the two of them play – I believe it existed as part of a demo from a previous project of theirs of which CC [drums] was also a member. So it’s a riff that’s been around for a long time. Originally, it was insanely fast – I described it as ‘guitar madness’ – and I thought it was cool, but I didn’t think we could write a melody over it. It was pure shredding, and one of those things that’d hung around. We’d tried to use it over the years without ever really nailing it. When we got together to work on the anniversary rerecord of [2010 debut album] We Stitch These Wounds, we found ourselves having such a good time that we decided we should get some new material going based around these old riffs. We wanted to write songs in the way that we used to: just the five of us in a room with no outside influences or producers. It was thrilling to get in the studio and be like, ‘Let’s write some fucking Black Veil Brides songs!’ We were going for something that sounded like the band we used to be and have perhaps strayed away from in recent years – we wanted to recapture that sound and energy.”

Lyrically, what subjects are you exploring with the new tracks?
“It’s interesting, because when you go a while without writing hard rock songs you get these pent up feelings that you can pour into your music. I’d been working on Andy Black for ages, which is more introspective and less aggressive than Black Veil Brides, so when it came to writing for The Vengeance in particular, we just decided to go for it. In the early days of the band we had a real chip on our shoulder and we were acting like the enemy of everybody, which is a hard thing to do when you’re selling out shows and people are celebrating what you’re doing – it doesn’t really match up. I remember touring the UK in 2011 and playing a sold-out show in Newcastle. I was walking around the stage looking for a fight, and our tour manager was at the side of the stage laughing at me; I went over to him to ask what he was laughing at, and he was like, ‘Man, everyone here is stoked to see you – there’s no-one in the room that hates you or is flipping you off. You need to chill out.’ We softened our stance in that regard pretty soon after. It wasn’t that I suddenly became immune to the band getting hate, but I lost that chip on my shoulder and became more focussed on perfecting the music and the art. Over this recent period that the band had been away, we kind of rebuilt that rebellious attitude, so when we were making these songs we had the attitude of, ‘Fuck it – we’re gonna kick everyone’s ass and come back swinging.’ The emotional message of Saints Of The Blood and The Vengeance is basically, ‘We’re fed up – it’s time for us to come back and be Black Veil Brides again.’”

What was it like filming the videos for both songs?
“It’s always fun to do things that people don’t know are happening, so we had to tell the crew to not say anything to anyone. We had a blast shooting the videos – it was so much fun, and the reality of the band right now is we’re just having such a great time. Being able to get together and put on the old make-up was great. We wanted to go back and do the war paint thing, but we didn’t want it to be like we were wearing Halloween costumes of ourselves, so we redesigned the make-up and had every member of the band come up with a new look. Working with my best friend [and director] Patrick Fogarty, who’s shot nearly every Black Veil Brides video since [debut single] Knives And Pens was awesome – we did it all by ourselves and actually edited the videos at my house. It was a really fun experience, especially because no-one knew it was coming, so there were no expectations placed on us. I see the videos as really exciting visual representations of the songs.”

READ THIS: 10 of the kinkiest people in rock and metal

You’ve referred to The Night as a ‘duology.’ Is the plan to continue releasing music in this format, rather than putting out another album?
“I’m not going to claim we’ve invented the concept of duologies – I just think it’s an interesting way of doing things, and I’ve never heard the term used in this context before. I did some research into words that could be used to describe a pair of artistic endeavours, and I found this old English word that meant a pair of plays or books that were written in conjunction with one another – that’s where this idea of releasing a ‘duology’ came from. We like the idea of having these two-song albums that have their own artwork, videos and merchandise and are presented similarly to a traditional album. And, quite honestly, we’ve been having so much fun writing that it felt like a shame to wait until a full album was written before releasing new music. I see this format as something that’s going to be really enjoyable for us, so much so that we’ve already begun work on the next one we’ll be putting out. There may be the potential to compile several duologies into a full record further down the line, but right now our focus is on making these mini records and having fun with it.”

Do you consider releasing songs in pairs rather than albums a more modern, streaming-friendly way of doing things?
“I guess so – artists in the hip-hop community have been doing it for ages. The music industry feels like the Wild West right now, and you no longer have to stick to the traditional structure of doing things because people are consuming music in different ways. The model of releasing a single, then an album and then another single from that album feels outdated now that you can get a full record on your phone the second it comes out; it feels kind of presumptuous for bands to decide what a second single should be when the fans have already had the album for several months. Plus, making mini records that have their own visuals and concepts feels more in line with what Black Veil Brides have always done. Obviously, a record like [2012’s third LP] Wretched And Divine: The Story Of The Wild Ones is meant to be an hour-long journey that the listener goes on, but I think we can create that same effect via bitesize pieces of music released over the course of several months.”

You’ve had a line-up change recently, with Ashley Purdy departing BVB. Was that something that happened quickly, or had it been on the cards for a while?
“It was something that was mutually agreed upon amongst us all, and both sides felt like now was the right time to do it. It was a very amicable parting of ways, and it presents the opportunity for fans who are interested in what Ashley is doing to hear new material from him moving forwards, as well as new music from Black Veil Brides. While I know it’s sad for the fans to see a line-up change, it was a very amicable thing, and it means there’s going to be new stuff from both of us, so I see it as a good move all-round. I understand that it’ll be jarring for some people to see this change, but ultimately it’s something both parties were interested in doing.”

Finally, your only UK show for 2020 announced so far is Download. Will you be embarking on a more extensive UK tour next year?
“Oh yeah, that’s all coming soon. It’s a definite.”

The first of Black Veil Brides' new series of duologies, The Night, is out now via Sumerian. The band will return to the UK next year for Download festival – get your tickets here.