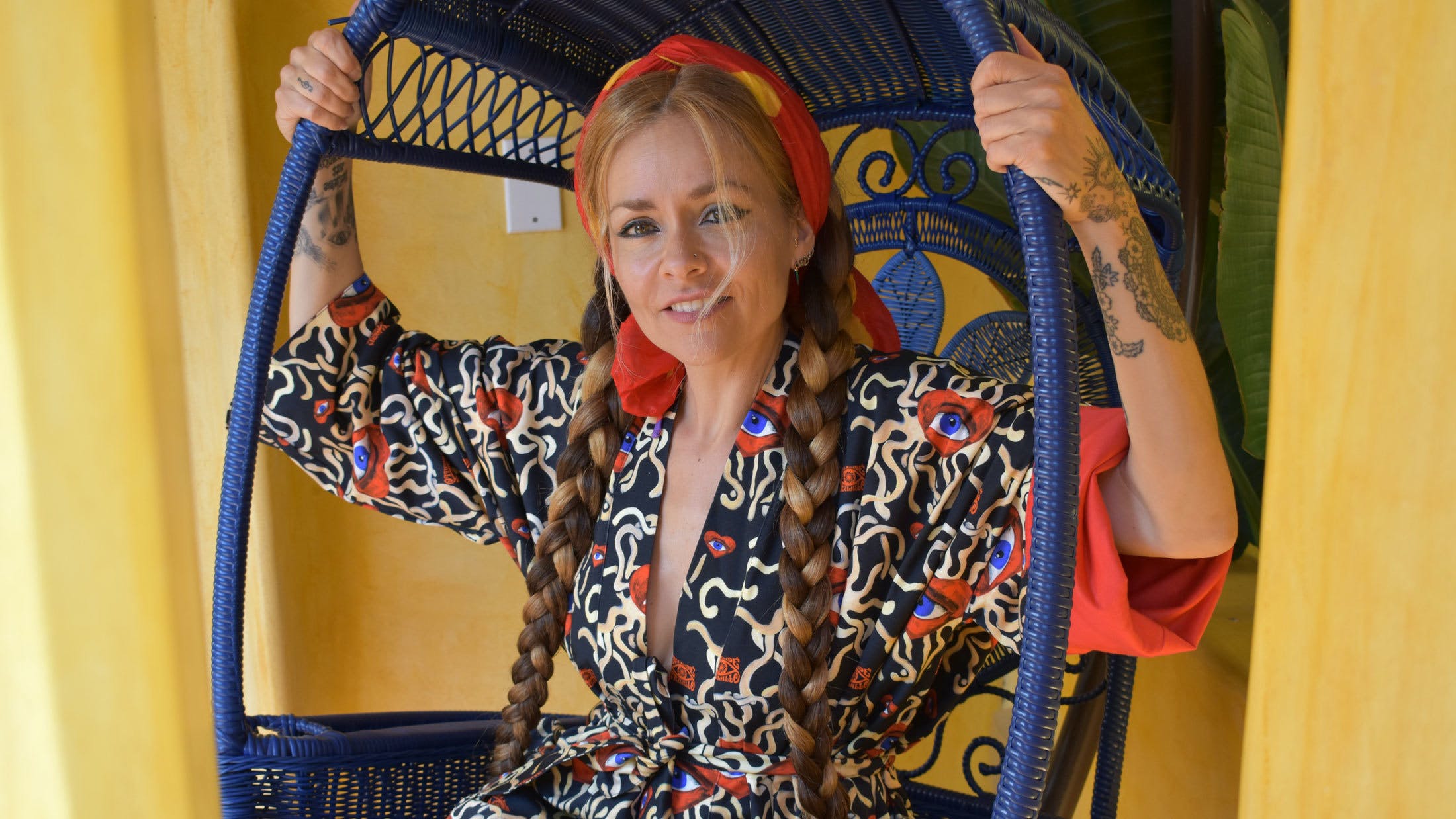 On June 17, 18 and 19, if you venture into the cinema of London’s Karma Sanctum Hotel, you’ll encounter artist, fashion designer and musician Chloe Trujillo. In order to raise awareness of and funds for the Teenage Cancer Trust, Chloe – who’s also the wife of Metallica bassist Rob Trujillo – will be live painting in the space for the three days, at the end of which the artwork will be auctioned off. Chloe’s art is very much inspired by both her spirituality and her love of heavy music, though she doesn’t yet have any idea exactly what form her art will take – that’ll depend on her mood and feeling at that time. It should be a fascinating experience, though, and one well worth checking out if you happen to be in central London on those days. To get a bit of a deeper understanding of what it’s all about, we got Chloe’s husband to ask her a few questions about her art for us, as well as about her involvement in the show and the effect her art has on her.

What types of art do you most identify with?
"I try not to identify myself with any type of art. It’s not that I don’t admire other artists, but I try to find my own style and have been trying to do that by searching within, trying to be true to myself and finding my own voice of expression. Of course, I use a lot of symbols in my artwork and I’ve been compared to other artists because of the colour palette I use, but really I’m just trying to be true to myself."

What themes do you pursue?
"The way I work is a very spiritual approach, so I don’t really take a specific theme before I start working. I kind of go into this meditative state – that’s the best way to explain it – and clear my mind, and whatever comes through comes through. It’s like channelling images – it’s like visions that I have and they all carry messages. Once I finish a painting, that’s really when I can define its meaning. It’s a bit like when you’re dreaming: you have all this imagery and it doesn’t always make sense right away but when you try to analyse it, it does make sense. So it’s not so much that I pursue themes but that they pursue me!"

Who and what inspires you?
"I consider myself pretty lucky because I’m always inspired by anything or anyone. I always have this urge to create and I don’t really feel good unless I do. If there’s a day when I don’t have time to draw or paint or write, it’s not a good day. I’ll wake up in the morning with a knot in my stomach. So I always have that inspiration naturally – there are just things that need to be expressed and created."

Which piece has had a profound effect on you?
"Every piece I create has a profound therapeutic effect on me. They release all this positive energy into the world – and in that moment when I’m painting it, that has the biggest effect. I remember a few years ago I did an art exhibition in the Mission District of San Francisco and I had a few pieces there; I was mingling and this lady completely started crying in front of my painting. She was asking ‘Who painted that?’ and she said she had a dream two nights before and the exact painting I did had been in it. I feel like information is out there and then you kind of pick up on something and translate it into art or music, and it will hopefully touch people’s souls and hearts."

What does art do for you on a personal level?
"I started painting when I was very young, probably as soon as I could hold a pen. When I was younger, I was pretty shy, but I always found in art a means of expression where I didn’t have to speak with my mouth. I could express myself on paper and feel safer that way. It’s a way to get out what’s inside and that way it’s not stuck. It’s like a scream or a laugh. But I try to infuse my artwork with positivity and not only heal myself but heal others. It’s like when you’re at a concert and everyone is singing together and being one."

How did you get involved with the Teenage Cancer Trust?
"I knew about their shows at the Royal Albert Hall, but Nathalie (Dufresne-Smith, wife of Iron Maiden’s Adrian Smith), who co-owns the Karma Sanctum Hotel, where I’ll be doing the live painting, told me about it. We were trying to find something good to do and find a charity, so when she told me about it, I was up for it. And then I started learning more about the organisation and it truly touched me."

Like you said, you’ll be painting ‘live’ during the three day exhibit – will an audience have an effect on what you do?
"Definitely! It will be very different to what I do usually because I usually paint alone in silence because I get into that kind of zone, that meditative space, and it’s a very spiritual practice and it’s very lonely. So inviting people into that intimate space will change it, but I’ll try to stay as true as possible. But I also want to show people how I work, because I think that’s interesting – you see musicians play onstage, but it’s not often that you see a painter painting. And I’m excited, because I’m also going to make myself open to answering questions that people might have. I’ve done live painting before, but there was usually a DJ playing so nobody was really talking to me. But for this I’m open to whatever. It’s a new adventure in that context, so if some people want to ask questions, I’ll be more than happy to answer them. And if they just want to watch, that’s great, too."

Will your work have a British theme?
"I don’t know! Like I said, I’ll see what comes to me. I don’t really plan anything before I start making art and I won’t before I’m in front of the blank canvas there, so maybe! I try to always be in the moment to see what happens. So because I’ll be in England, maybe there’s some British theme that’s going to come through. Who knows?!"

What are future plans with regard to your art?
"I’m going to keep doing what I’m doing. There are a few things in the works, and maybe something in LA that’s also for the Teenage Cancer Trust. We’re talking about that at the moment. But I’ll welcome whatever the next adventure will be. I just know that I’ll keep painting, and in music I have a couple of projects that are coming out later this year, and then I’m going to be launching a new collection for my fashion designs little by little. So there are lots of things going on, but nothing is completely set in stone yet. But I’m keeping busy!"

Chloe Trujillo’s Art In Motion exhibition will be exhibited in Karma Sanctum Hotel Soho from Monday June 17. She will be live painting in the cinema room of the hotel from June 17-19.