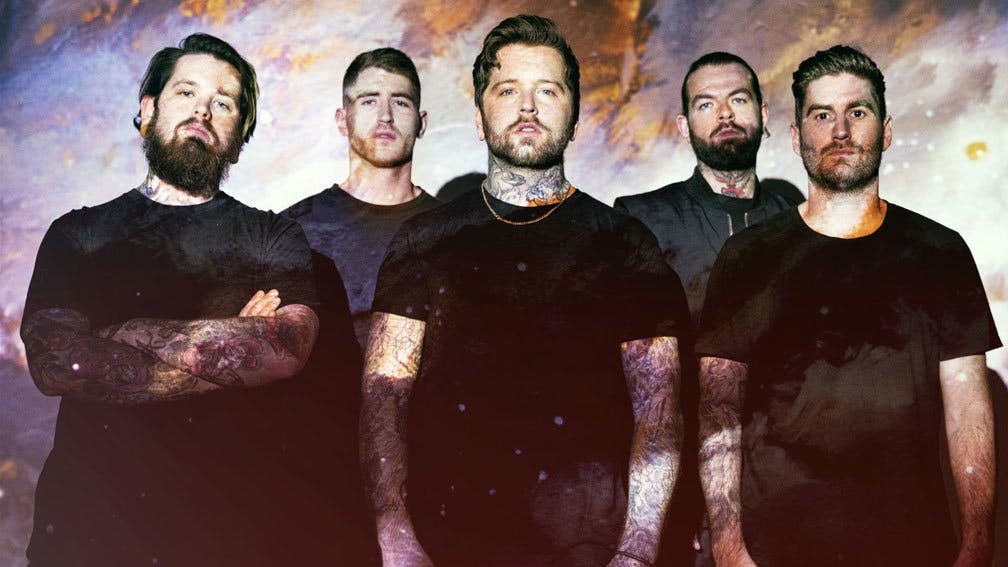 Dani Winter-Bates is keeping his cool during a burgeoning summer on lockdown. Rising temperatures, increased isolation, and the spectre of the walls closing in might have bothered him more in the past, but much has changed since the release of his band Bury Tomorrow’s last album, 2018’s Black Flame. For starters, while the coronavirus outbreak has spelled a pause on Dani’s musical life, his other job, as a Service Improvement Manager at a hospital in his hometown of Southampton on England’s south coast, has provided him with a semblance of normality, and access to the kind of conversations that helped with his mental health in recent years.

“We need to be able to talk about how we are coping and feeling, now more than ever,” says Dani of the pandemic that’s seen people the world over be confronted by their own mental health. It also delayed the release of Bury Tomorrow’s sixth album Cannibal, which, with the cancellation of all touring, looks set to be the band’s most protracted album campaign yet. All of this would be less of a problem, of course, if Cannibal weren’t the most challenging record of Bury Tomorrow’s career, and their frontman’s life.

“It’s less about mental health than it is a broad spectrum of issues and how I dealt with them personally,” is Dani’s pitch. “There’s a lot of stuff in there that’s more applicable now than when we were working on the record.”

Cannibal’s frantic opening track Choke, chronologically speaking, introduces listeners to a record of gasp-inducing honesty. The lyric ‘Sick of hiding the truth/Fucking lying to you’, however, signifies a key moment long into a journey towards mental health diagnosis. “Music being subjective, you could flip that in so many different ways,” explains Dani. “It could be me lying to myself that I’ve been okay for all these years. It wasn’t something that just ‘turned on’, just as it’s not something that can be ‘turned off’. I wasn’t suddenly suffering from depreciated mental health, it was gradual and I came to a crisis point when I realised I needed to address what caused and compounded it. I can hark back now on my life with my diagnosis and say, ‘That was anxiety’ or ‘That was depression’. It’s easier to look back when you’re more ‘well’ and have increased resilience.”

His cynicism radar clearly operational, Dani is aware there’s a certain “shock value” in making an album largely focusing on mental health, though his justification for doing so illustrates why he’s the right man for the job. “The shock comes from many of us shying away from the darkest parts. When you start talking about hopelessness and not wanting to construct a future with depression there’s usually a sharp intake of breath. That’s how people react when raw emotions are thrust upon them.”

Cannibal’s title track is proof there’s no end of difficult topics Dani will grapple with, dealing as it does with the issues that eat away at us and cause us to eat away at one another, too. This feels pertinent at a time when the media is ablaze with conversations about race in light of the killing of George Floyd and the protests of the Black Lives Matter movement, with social media descending into a quagmire of aggressively opposing views, questioned intentions, identified misdemeanours, and cancellation culture. “Calling people out is an important function of our generation,” is Dani’s take. “Lots of people view it negatively, but I view it as a sign that people feel empowered enough to be able to identify examples of injustice. You could apply the ideas of that song to any point in history. When I was younger, for example, women were being portrayed in highly sexualised ways, and being made to believe they needed to be a certain way or a certain size. Human nature is a cruel thing. We are cruel to each other and we’re cruel to ourselves. Cannibal the song addresses that as a general theme.”

Aware of the density of themes we’ve become entangled in mere minutes into this conversation, Dani takes a moment to pull back and identify what all this has in common. “It’s about having conversations,” he summarises. “Whether that’s about injustice or privilege or mental health. Ignorance is born from avoiding difficult conversations. This is an opportunity granted to me by the people who have bought our records and supported us over the years, which has allowed me to use my platform to do something I feel really strongly about.”

It’s an unsurprising statement given Bury Tomorrow’s well-documented dedication to their fans, and vice versa. It’s complicated, however, by the presence of Cannibal’s fourth track, Imposter. Imposter Syndrome is when people doubt their own accomplishments and fear exposure as a ‘fraud’ in their chosen field. It’s something Dani teaches about in his NHS work, despite being conscious he’s not the archetypal figure many might expect in a senior position in the health sector, and admits his experiences with it as an artist have been even more obvious; heavy is the head that wears the Brit metalcore crown, it turns out.

“It’s probably the most direct song when it comes to a specific disorder, while the rest of the album is more feeling based,” Dani says of Imposter. “The paradox with Imposter Syndrome is the more you’re held up, the more you shy away – that’s how the seesaw of it seems to go. I’ve made peace with what I do. Putting things into perspective, I scream in a band for a living. When I’m in rational thought, I know I’ve played shows for the past 15 years and there’s been only two shows where I could say they were pretty subpar as far as my vocals go. I’ve done my parts for albums in three days. I know I can do my thing, but it’s helped that my two worlds, working for the NHS and being in a band, have forced themselves together over the last few years. The message I deliver on stage is the same one I’d deliver in a meeting.”

While it’s amusing to think of Dani with one foot up on a boardroom table, urging his colleagues to ‘open that shit up’, it’s clear the unification of these two sides of his life made the management of his struggles, and music that articulates them, possible. So, too, did the success of Black Flame, an album that seemed a culmination of Bury Tomorrow’s capabilities. Their frontman, however, knew they could do more. The first taste of how right he was came during BT’s European tour last winter in support of Black Flame, at the beginning of which the band released The Grey (VIXI), Cannibal’s fascinating, feral first taste, and a song Dani would delve into during all 19 shows on the jaunt. “I’d built it up within the set,” he recalls now. “It’s rare when you’re in a band as long as we’ve been to have those new moments of being taken aback, but the emotion was palpable. That’s when I knew something was different.”

The reactions vindicated the crushing honesty of the album Dani knew he had in the can, and the decision his bandmates – guitarists Kristan Dawson and Jason Cameron, Dani’s bassist brother Davyd, and drummer Adam Jackson – had made to “surrender” this album to his preoccupations. “They said, ‘Shall we go whole hog on this album and you do you?’, which was a very selfless thing for them to do as musicians, though we’re five partners on this record.”

Dani ‘doing’ Dani resulted in Better Below, arguably Cannibal’s darkest and most unambiguous offering, which the frontman describes as dealing with times “when there’s no clarity in your mindset, just despair.” He didn’t connect with the song during the demo stage, sidelining it in favour of more immediate material, which he’d record with a handheld mic to replicate the intensity of being on-stage. The exhaustive process meant Dani was physically and mentally drained by the time he reconnected with the track, resulting in lyrics and a performance coming direct from a mind raw from exertion. “The floodgates were open,” he exhales deeply. “I figured if I was going to talk about things, I might as well be as blatant as I can be on the topic of hiding. Better Below is very specific in its intent, but it also spans all of the diagnoses I’ve had over the years, harking back when I used to hide having anorexia, to not comprehending my depression, to not knowing what was going on when I hit crisis point and found out I had generalised anxiety disorder.”

Even hearing these experiences anecdotally, let alone on the ferocious album they’ve informed, is thoroughly bruising. How, then, does Dani feel about the prospect of discussing and performing these songs for at least a couple of years? “I reduce my anxiety by talking about it,” he replies quickly, smiling, having clearly asked himself this several times. “Selfishly, what I got from this album was the ability to complete it and put it to bed. I put my money where my mouth is and used my platform to open up a conversation. And I knew that in taking this path, and making this album, I’d open myself up to answering lots of questions about difficult things, but I knew I could do that.”

“I’m going to have peaks and troughs throughout my entire life,” he reasons, light streaming through the blinds. “But now I have the tools to be able to navigate that and keep myself safe.”

Cannibal is out July 3 via Music For Nations and is available for pre-order now.