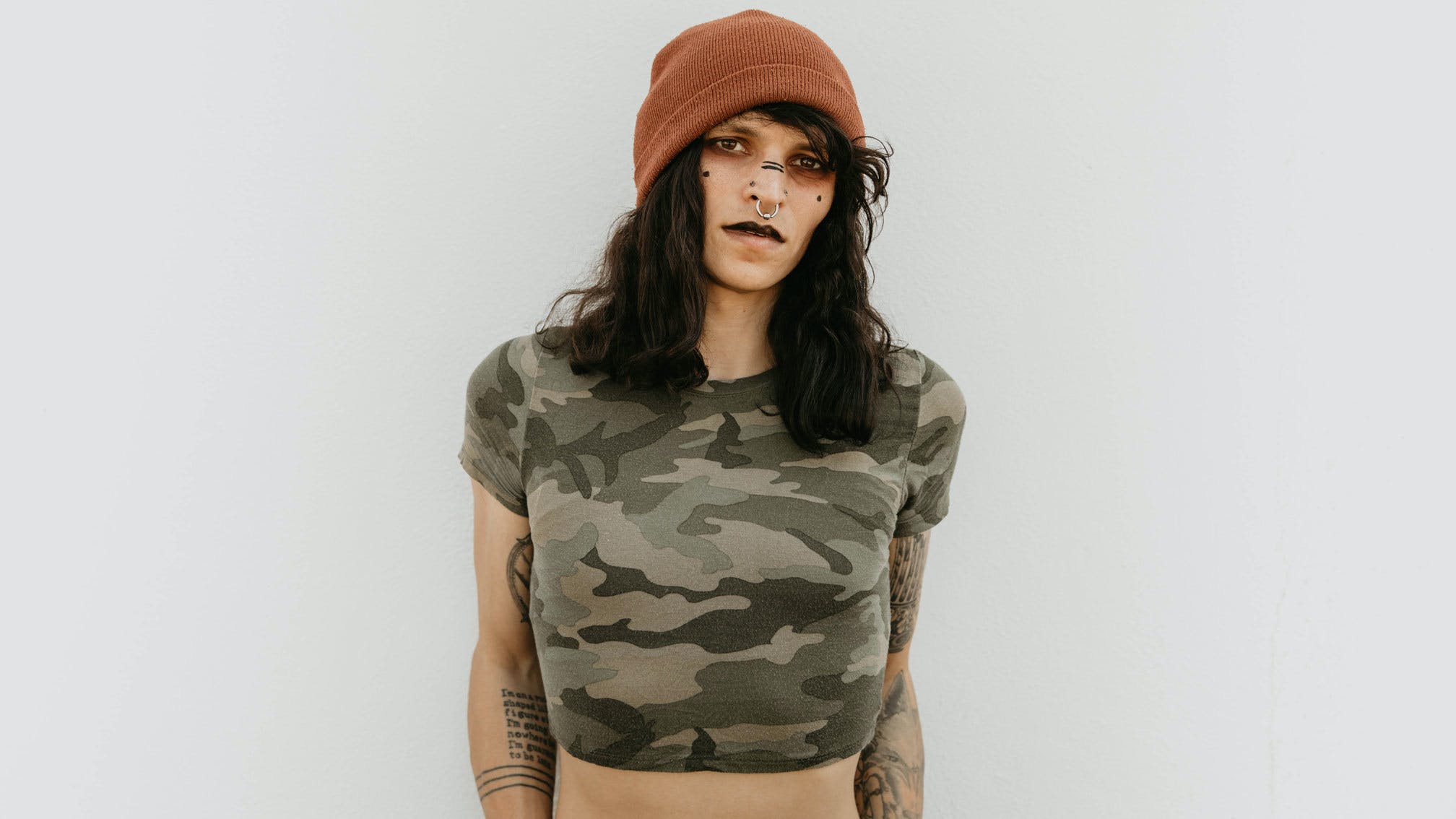 Connie Sgarbossa hasn’t slept. It’s 2pm in San Diego and her band SeeYouSpaceCowboy got back from tour late last night. With the exception of a few dates right at the start of 2020, it’s their first time on the road since the pandemic began, and their last before their new album, The Romance Of Affliction, comes out. But it’s a tour that almost didn’t happen – that almost couldn’t have happened. Because two weeks after she and the band finished the record, she overdosed in a deliberate attempt to take her own life. It’s an incident she doesn’t shy away from talking about, nor one she’s reluctant to write about. In fact, The Romance Of Affliction is a no-holds-barred examination of the darkness that has often consumed her. And, as her overdose clearly shows, it’s a demonstration that catharsis through art – the idea of a tortured artist writing their way out of deep depression – isn’t always a reality.

“I find it really interesting,” she begins, “that we hold art and music as this thing that gives your life meaning – if you believe that you can give your life meaning. What happened to me after finishing this record illustrates that that’s not necessarily enough. It’s not the miracle cure that we want it to be or that we romanticise it as. We want to say ‘Music saved my life!’, but not really in my case, you know? It doesn’t really work like that.”

In fact, dismantling that idea was one of the main reasons Connie wrote this album. The 25-year-old – who was diagnosed with bipolar disorder and OCD just before SeeYouSpaceCowboy started making it – has struggled with depression for the majority of her adult life. She’s also an addict. Both have been big influences on her music, as have the various traumas that have also plagued her life. The band’s 2019 album, The Correlation Between Entrance And Exit Wounds, was essentially about the worst of those – the death of her girlfriend Natalie. But as The Romance Of Affliction’s title suggests, she’s not one for embellishing her suffering it. She writes about it purely because she has to.

“The record is about how we romanticise the negative and the darkness in our lives so much,” she explains. “We put it into this art, and I feel like we put it out there as our own personal catharsis, but it’s also often romanticised by others. It’s romanticised as this thing where deep suffering creates great art, and it’s kind of contorted beyond what it’s meant to be, which is just self-expression, and turned by others into this monument to what it means to struggle.”

It's for that reason that Connie wanted to defy the album’s title and keep The Romance Of Affliction as raw and real as possible. It doesn’t sugarcoat anything. Interestingly, the record was originally envisaged by Connie as the exit wound to the previous album’s entrance wound – a set of songs designed to show that she’d got better since then. When she realised that clearly wasn’t the case, she decided there was no point in pretending, and as a trans woman – who came out as non-binary in 2014 and as female in 2016 – that’s something she was very adamant she didn’t want to do. As such, The Romance Of Affliction is an unflinching look at her own actions, her own truth, and nothing else.

“If we make art for catharsis,” she explains, “there’d be no point in writing an album that wasn’t true. There’s way more validity in writing an album that doesn’t paint me in the best light, but is me. It’s my life. After Natalie died, I did a lot of things I’m not proud of. I was doing a lot of drugs, I was having sex with a lot of people, I was doing everything I could to not grieve. Anything to distract myself was fair game in my mind at the time, and I was desperate for anything. So it’s liberating in a way to just say ‘This is who I am,’ and not so much worry about people judging you. I already deal with so much of that being trans, so why not just apply that to every other part of my life, too?”

Connie is an incredibly intelligent deep thinker, but equally troubled and emotionally unstable. It was in high school, where she was “incredibly depressed”, that she discovered her love of philosophy. It was less academic, however, than a coping mechanism, a way of hiding her feelings from herself as well as her searching for the answers that she didn’t have at the time – answers which really only materialised with her recent diagnosis.

“It was definitely the thing I clung onto, to not accept that I was mentally ill,” she admits, “and to more be like, ‘Oh no, it’s just because I know the truth about existence. It’s not because there’s a chemical imbalance in my brain. It’s because I read some philosophy books in high school and I knew all the answers as a 17-year-old kid and that’s why I’m like this.’ My obsession with philosophy was a way to not come to terms with the fact that my brain had some things out of whack.”

That depth of thought has always bled into the band, but it’s become much more personal recently. Before, SeeYouSpaceCowboy songs would be unapologetically political. Now, that stuff is less salient, but no less important to her.

“Politics will always be part of my life,” she says. “I don’t write songs about anarcho-communism anymore, but I still very much believe that some of those systems should be integrated into current society as a way to help people. Now, though, I really want to put my voice out there as an addict. Drug dealers are a symptom of a terrible economic system. It’s not that they’re pieces of shit who want to kill the population. They have to do it to survive because of their economic situations and the oppression of the working class and poverty, and a lot of me wanting to put this narrative out there is because I feel this voice isn’t in heavy music or hardcore enough. Addiction is a disease. It’s not like we fuck up our lives because we want to. I’m not scary, I’m not going to steal your fucking car to buy heroin. We’re just people who need help and support, who are just going through shit and we just deal with it in different ways. We don’t need or deserve to be demonised.”

All those layers are contained on the band’s new record. Its blend of post-hardcore, sasscore and metalcore coalesce to create a brutal sonic representation that dives deep into Connie’s heart and mind, her political beliefs and values, her philosophies. It also reflects the internal anguish of her mental illness and the volatile, turbulent life she lives as a result. It’s an album written by a junkie – her words – about the reality of what that entails, as well as what it’s like being an addict in love with another addict, Connie’s current girlfriend. That’s who found Connie after she overdosed, and the reason she’s still alive today. That suicide attempt adds both an extra level of irony to the album title and a heavy dose of reality to the record itself. It also makes for an incredible story. In fact, it’s an event you could imagine some unctuous marketing executive making up to help promote the album. It wasn’t, of course. It was as real as real could be: Connie fully intended for her overdose to work.

“I don’t think it was so much a cry for help,” she says, “as it was the ultimate trying to escape. You don’t take 10 bars of Xanax and snort a bunch of Oxy if you’re crying for help, because that’s just going to kill you.”

Thankfully, it didn’t kill her. And ever since, she’s been incredibly careful when she relapses (“Any opiate addict will tell you that you will relapse, that it will happen, it’s just part of it,” she explains candidly). Those problems with addiction – understandably – began after Natalie’s death, and she’s been struggling it with ever since.

“It just kind of snapped my brain,” she says. “I literally lost my mind for a while, and it mostly all got funnelled into substances. I didn’t realise what was going on quick enough to put a stop to it. I let the train keep going, and then it was like, ‘Now I can’t stop.’”

Is she glad, at least, that her current girlfriend found her and saved her?

“One of the first things I said to her,” Connie admits, “was, ‘I wish you’d let me die on the couch.’ Which was a really shitty thing for me to tell her. At first, I didn’t feel any different. A lot of people say, ‘I almost died and now I have a new lease on life’ but I didn’t. But as time went on and I thought about it, it’s not so much that I give a fuck about the fact I almost died, but how it affects everyone around me. And that acts as a crutch currently. I know it’s not the best stance to take – you should want to live for yourself – but as it stands, that’s my crutch and it’s a consistent one. For years, she’s been the one to get me to stop and pour my bottle of tequila down the drain and go sober for 30 days or whatever it is. I’m really, really lucky to have her because she’s always there for me no matter what.”

If there were any justice in the world, The Romance Of Affliction would make SeeYouSpaceCowboy huge. The band – which has seen multiple members come and go since forming in 2016, but which currently consists of Connie’s younger brother Ethan on guitar and vocals, Taylor Allen on bass and vocals, Timmy Moreno on guitar and AJ Tatol on drums – have made a truly incredible record that marks them out as one of the most vital bands in the scene. Of course, there is no justice in the world. Besides, Connie’s aims are much more modest. She just wants to get better. And she’s trying, little by little, day by day.

“Until recently,” she says, “I’ve always told myself there’s nothing wrong with me, that everything’s fine, I’m just weird. But in the last couple of years, it’s been like, ‘You know what? It’s not normal to think about killing yourself three times a day.’ That’s not okay. So I’m trying to come to terms with everything instead lying to myself like I did throughout my entire life. I accept that I am how I am, but I’m not okay with it, I’m trying to make it better. But I also don’t regret anything in my life. Everything I do and that has happened to me makes me who I am, and, in a sense, I wouldn’t want it any other way. Of course, it’d be nice to not be mentally ill and not be a drug addict. But who would I be if I wasn’t?”

More than anything right now, though, she probably needs some sleep.

The Romance Of Affliction is out now via Pure Noise

SeeYouSpaceCowboy will hit the road with Static Dress and Cauldron for a UK and European run this June.