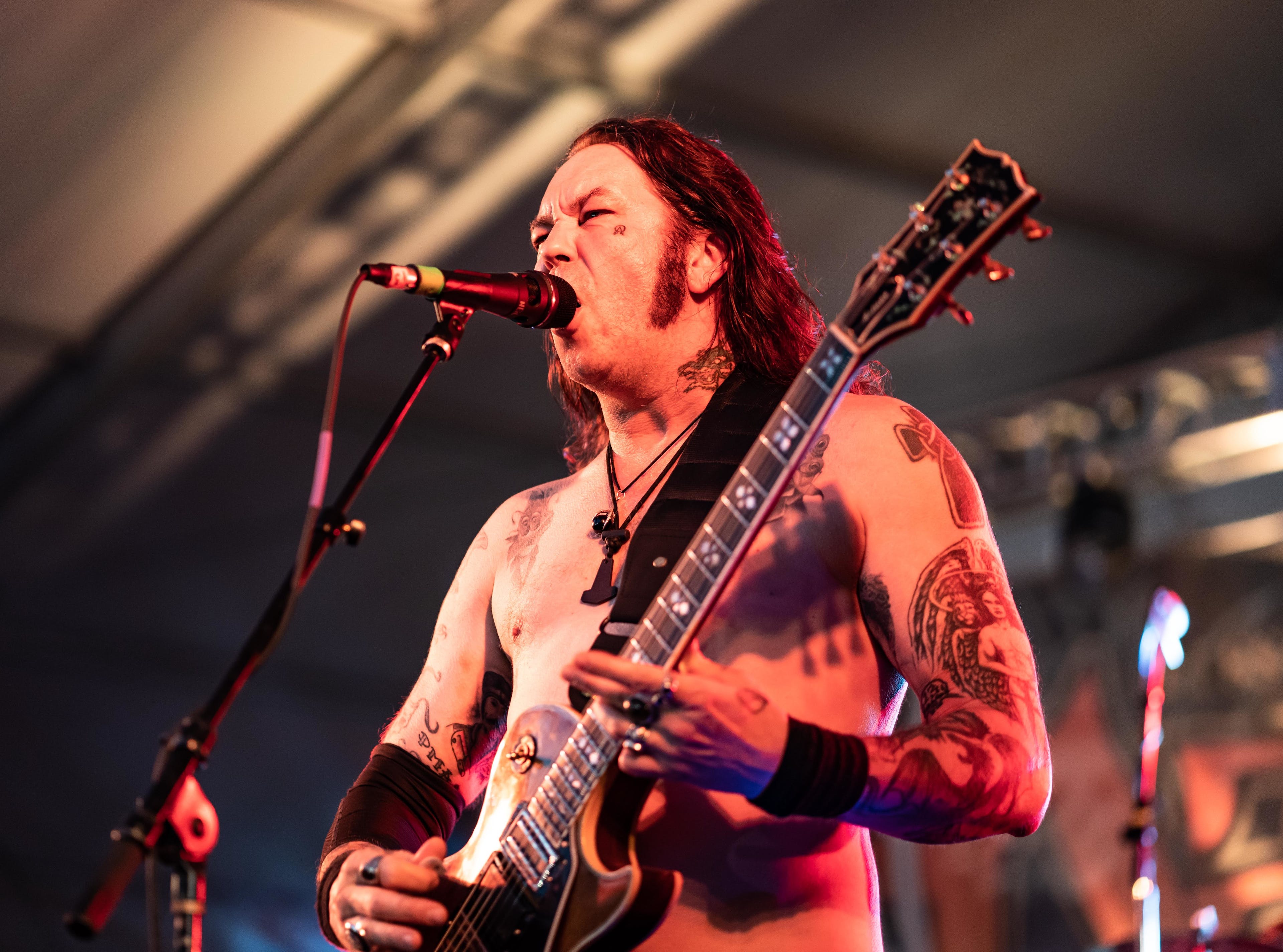 “Where’s that music coming from?” a woman in a cutoff Cannibal Corpse t-shirt asks no one in particular. She takes a swig of brown liquid from a miniature beer stein, then wobbles abruptly into a guy in a camouflage visor and a Milwaukee Bucks jersey. Instead of getting angry, he brandishes a tall bottle and fills her stein with more brown liquid.

“Oh fuck!” she yells. “Is this Assassin? How much did you pay for that?”

“My dude in Iowa got it for me,” he replies.”But it goes for, like, $350 easily.” He pours the rest of the beer -- a stout made by Toppling Goliath in Decorah, Iowa -- into the glass of another stranger to his right, then struggles to find a place for the empty. It’s only 1pm and the long picnic tables in the beer share tent are already at max capacity with discarded bottles.

Considering that over 12,000 beer geeks and metalheads showed up to Dark Lord Day, a metal and beer festival at 3 Floyds Brewing in Indiana, this is nothing unusual. Most of them brought backpacks filled with some of the rarest and most expensive beer in the world, and they’ve assembled under a football field-sized tent in a parking lot in Indiana to share it with complete strangers.

Of the assorted ventures that have hitched their wagons to heavy metal over the years, beer might be the most logical and welcome of them all. Most metalheads love beer, and the appeal of the genre’s eye-catching aesthetics is hard to understate in such an increasingly competitive and design-focused industry. Plenty of breweries these days are proudly metal as fuck, but none of them have parlayed their love for heavy music into such a singular identity as 3 Floyds Brewing.

The brewery is situated on an industrial parcel tucked away from a charmless commercial strip in Munster, Indiana -- a small town about 45 minutes southeast of Chicago -- but the vibe of their operation is as distinctly metal as it gets. Beers have names like Necron 99 and Permanent Funeral -- the latter of which was brewed in collaboration with grindcore legends Pig Destroyer -- and their labels look more like cover art for Mastodon or Judas Priest LPs than what you’d find wrapped around a bottle of beer. This alone is worthy of attention, but the beer itself is the real commodity. Crowd-sourced beer sites like RateBeer.com and Untappd consistently rank 3 Floyds in the god tier of craft breweries, and a lot of this has to do with Dark Lord, an acclaimed Russian Imperial Stout the brewery releases just once a year at Dark Lord Day.

Most beer releases are relatively joyless events. Beer geeks brave the elements and camp out in front of their favorite breweries for hours with hopes of snagging their next “whale” -- a beer rare enough to merit gobs of hype and the hefty price tag on the secondary market that often comes with it. The first few Dark Lord releases weren’t much different, but as the hype surrounding the beer grew, so did the lines. It started to look like a music festival without any music, so the next step was a no-brainer.

“It was a forgone conclusion,” says Chris Boggess, 3 Floyds’ brewmaster of 13 years. “For us the connection was very organic. We didn’t think about it much, we just did it.”

In 2007, a stage was set up inside the brewery and bands like Dreadnok Ripper, Imperial Battle Snake and Bible of the Devil played near the tanks. An estimated 3,000 people showed up, and the crowds only grew from there. The acclaim for Dark Lord kept pouring in, and by 2008 3 Floyds had a “real shitshow,” as Boggess calls it, on their hands. They added more bands, grew the footprint of the festival to include the archipelago of parking lots in front of the brewery, and sold tickets to make sure everyone who showed up got the beer they came from across the globe to acquire.

The band making all the noise the woman in the Cannibal Corpse asks about is Canyon Of The Skull. Their guitarist is Todd Haug, the former brewmaster of Surly Brewing in Minneapolis, and now a head brewer at 3 Floyds. His band joined the lineup last minute to replace Power Trip, who cancelled the day before due to an undisclosed band member being involved in a bicycle accident. Writhing doom metal fills the air under the tent, and for the handful of heshers who are just as excited about the music as the beer, the party is just getting started.

Then comes River Black, a New Jersey hardcore outfit whose tirade of riffs and drums starts the first of many low-key circle pits throughout the day. Only a handful of devotees attracted by their connection to Burnt By the Sun and Municipal Waste remain engaged throughout the set, and soon after a more foreboding presence emerges in the sky. Dark Lord Day gets soaked.

The main stage is evacuated due to a tornado and lighting storm warning. Drunken revelers wander around in a daze, many with no idea how to get back to their hotels across town without assistance from their attendant shuttles. Some people stay put, soaking wet but oblivious and gleeful on account of all the beer. It’s pure chaos for the better part of an hour, then out of the blue the local-ish post-metal outfit Minsk emerges and tears through a 20-minute set of devastating longform brutality. The festival is back on track, and a fresh wave of attendees reinvigorated by the rain or siestas back at their hotels get right back to it.

After Minsk is the straight-ahead sludge of the Atlas Moth. Knowing the crowd is likely there to avoid being rained on again, the Chicago quintet spares the pleasantries and launches into a set that swings wildly between anguished screams and almost poppy multi-tracked guitar parts. The latter inspires a drunk guy towards the back to scream a request for a Boston song, but the humor is probably lost on the Atlas Moth -- if they even hear him.

By the time New York thrash legends Nuclear Assault hit the stage, the crowd is dominated by true metalheads rather than curious passersby. Dudes in Nuclear Assault t-shirts slowly materialize, and the golden era thrash emanating from the stage reminds the less informed audience members that their scene goes much deeper than just Metallica and Megadeth.

The music portion of Dark Lord Day is capped off by High On Fire, the festivals most frequent guest. Matt Pike emerges as intense and shirtless as ever, and for once the attention shifts ever so slightly from beer to music. Dark Lord Day feels more like a beer festival with a metal problem than the inverse, but the two are such perfect complements that you won’t hear a single complaint about the scattered focus between the two. It’s rare that world-class beer is so readily available at a music festival, and many grumpy adults are actually grateful of the scarcity of its tickets, which are usually gone within an hour despite their $200 price tag. It’s almost comical how overstaffed the event is, which is a welcome necessity considering the amount of 12% ABV beer that flows freely from 9 am on. It’s very easy to overdo it, but it’s even easier to worm your way up to the front of the crowd stage during High On Fire’s set, which is a feat that would be nearly impossible at a dedicated metal festival. Elements aside, Dark Lord Day is a beer-loving hesher’s paradise, and you should absolutely make plans to go next year.