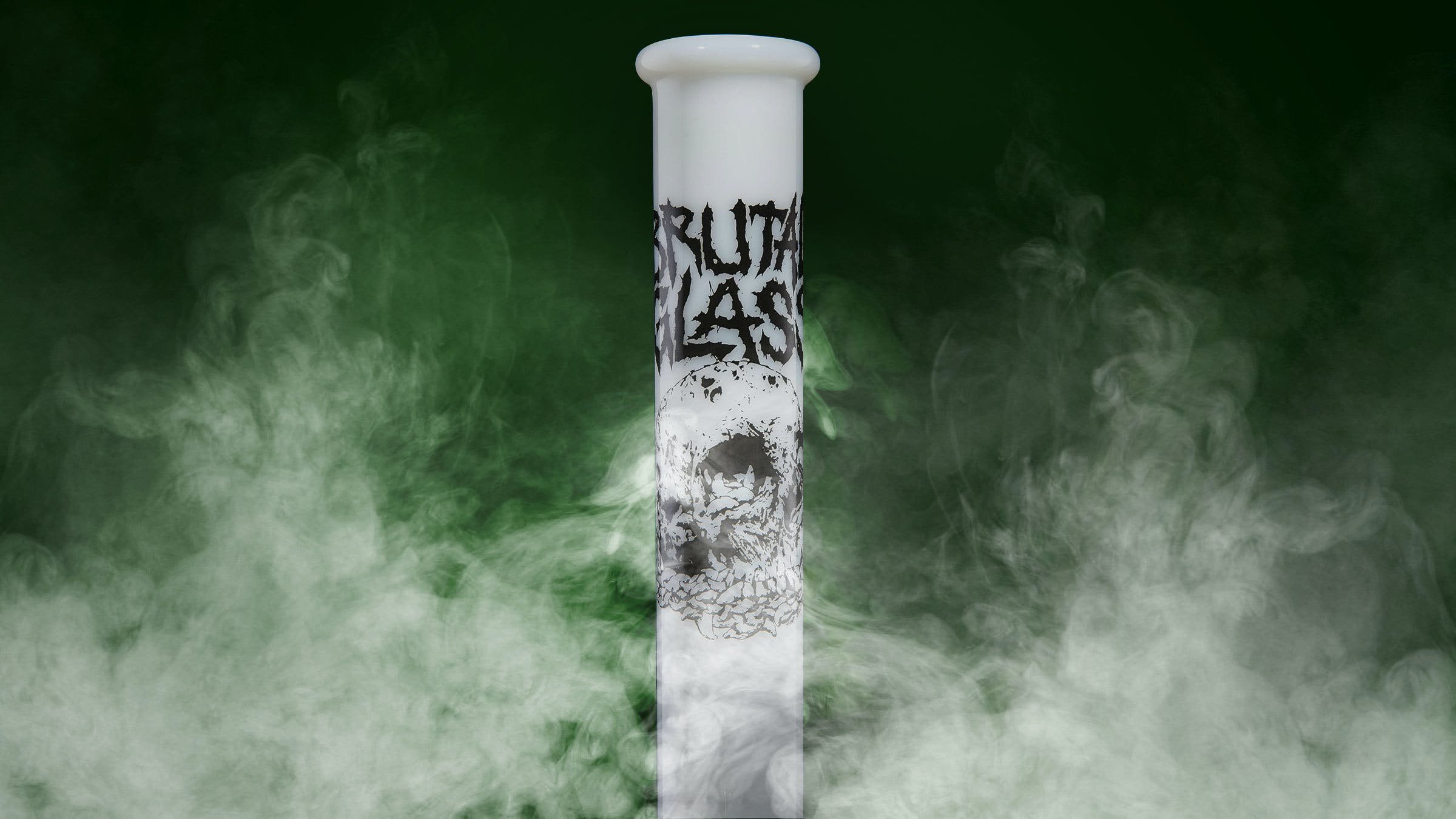 The extent to which brutal death metal fans love smoking marijuana might surprise some people. Sure, heavy metal and stoner culture have always been intertwined since Ozzy sang an excited serenade to weed itself on Black Sabbath’s Sweet Leaf. But these days, a large percentage of metal’s hardcore potheads are fans of blistering, technical music about explosive murder, and the extent to these musical speedfreaks love burning one down be outwardly baffling to those who take the music at face value and think that chilling out while stoned is better done to Bob Marley than Origin or Deicide.

While joints and edibles are favored by some, and many people also enjoy vaping, bongs and pipes have always seemed to be the preferred smoking vessels of stoner metalheads. That’s where Brutal Glass comes in. The smoking paraphenalia company, started by “Brutal” Bryon Acevado, produces glass tools featuring awesome graphics by death metal illustrators like Tony Koehl. And rather than just sell ceramic pieces of shit shaped like, say, an evil wizard or jester skull, Brutal Glass focuses on making functional, attractive pieces that serve the needs of everyday smokers looking to regularly treat the terrible disease of Everyday Life.

To learn more about this new line of helpful household accessories, we reached out to Bryon to ask him those most vital questions: dude, are you cool? Do you party?

What first got you into death metal?

It started off when I was 13 years old. I heard Blackened by Metallica, and that was the changing moment in my life. I was instantly hooked, and was a metalhead from then on. Going into death metal, that happened in high school -- I got into bands like Deicide, Morbid Angel...I remember seeing Morbid Angel open for Pantera, and Pete Sandoval going off on his drums, I had never seen anyone play like that. I play guitar in a death metal band as well -- it’s something I’ve always enjoyed doing.

When did the idea to start a metal-centric bong company first form in your mind?

I was working for a company that made a product called Grinder Grease. I was a sales rep for them, and trying to get involved in the glass industry. I’m not a glass blower, but wanted to get my foot into the door. I was going to a lot of industry trade shows and glass trade shows, and I was noticing that every was geared towards hippies, hip-hop fans, reggae fans, psychedelic fans. But no one was marketing toward this metalhead crowd, like me, who I know for a fact is a big smoking market. All of my metalhead friends smoke. From there, I had this idea, and I had a hard time bringing it to fruition, but fortunately I knew some people in the industry who pointed me in the right direction. I was able to find an American glass manufacturer, and an American dude who makes all my labels, so I was able to grow it from there.

The art on the Brutal Glass bongs is so cool -- who did you get to design it?

I was able to get a bunch of metal artists involved who were very cool, like Tony Koehl, who’s done artwork for countless bands like The Black Dahlia Murder. Mark Richards, designed my logo. He’s worked with Revocation, doing T-shirt designs and other art as well. That was my ultimate goal with it --build it from the glass up, getting the designs, and taking it from there. Tony’s a great guy -- I met him through the Las Vegas Deathfest. One of the first things we did together was at Las Vegas Deathfest IX, when I actually premiered my glass line. He did the artwork for that, and I had ten bongs made with the artwork for the festival on that. I actually raffled two of them off, and the proceeds went to the Bill Tolley fund, benefitting firefighters, named after the drummer from Internal Bleeding.

Are there any other artists you’d really like to work with?

Riddick! I hit him up before, and he said he’s not taking any commissions this year. Dan Seagrave -- I’d love to do something with him. I want to keep it true, and keep it metal artists doing the artwork for the glass. I’m also working with some metal glass blowers as well, who do really cool metal-themed glass artwork. It’s a lot more expensive, but it’s really cool, and these are all guys who like metal as well.

Why do you think it is that metalheads, though fans of such angry and violent music, love weed so much?

Well, metalheads like to hang out together. We like to party together. And I’ve always felt that cannabis brings people together. It doesn’t matter -- you can have people from opposite backgrounds. Cannabis and music go hand in hand. It allows you to analyze music more, not just metal but all sorts of music. Cannabis has influenced so much music all through the years in all different types of genres.

Who are the extreme bands you most like to listen to while baked?

Cannibal Corpse has always been one of my favorites. Hate Eternal has always been a favorite of mine -- I could listen to I, Monarch over and over again. The Black Dahlia Murder’s music is fun. Suffocation, Meshuggah...I can go on forever.To me, cannabis is just about chilling.

What about the opposite -- who DON’T you like to listen to while stoned?

ZZ Top! For some reason, man, I can’t...I don’t know if it was maybe my old roommate who used to jam ZZ Top. I kind of like them, but when I’m high, I just can’t do it.

Brutal Glass' bongs and pipes are available at their website. Keep up with Bryon and Brutal Glass on his Instagram.