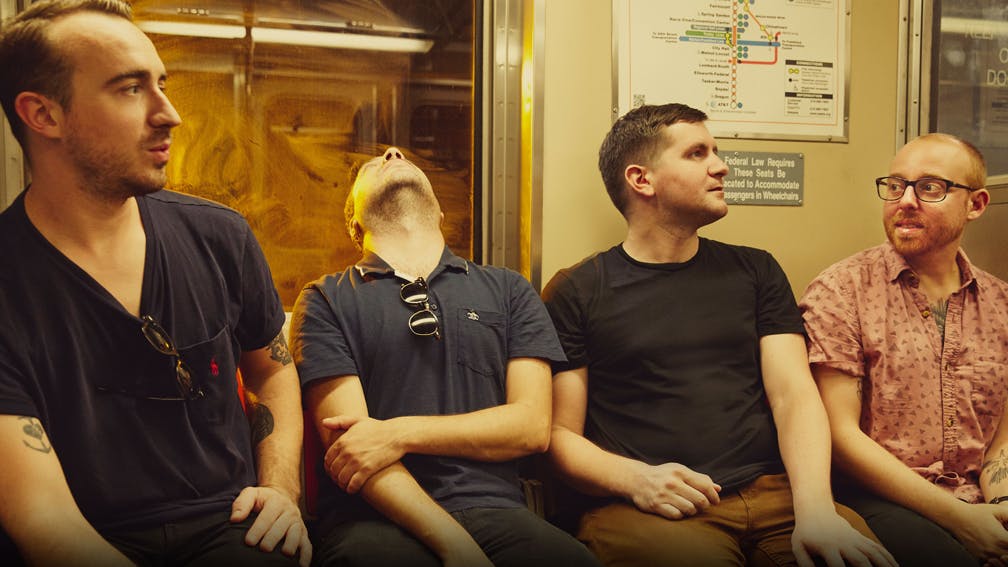 This week the UK welcomes The Menzingers back for a couple of feverishly anticipated live dates. The Scranton, Pennsylvania punks have been on the road pretty much non-stop since their inception in 2006, fuelled in no small dose by a lot of good will and support from the grassroots music community – something that co-vocalist and guitarist Greg Barnett insists is absolutely vital to the survival of any band operating at their level in the alternative scene.

“I think the music industry has always been a couple of steps behind what everyone else is doing to push music forward. For so long there has been this idea that it should exist in this rule of, ‘You get a management company, you get a record label, they put you in touch with people.’ But fans don’t care what those gatekeepers say; they care about what’s important to their community of friends that they respect. And with the internet, we’ve been able to break down that hierarchy of people deciding who has careers and who doesn’t. We didn’t have any industry support, so we joined a community and built a community around us.

“We moved to Philadelphia at a time when there was a lot of support from this scene of bands, but I have travelled around America more times than I can count and we have played really small towns where there’s still a strong punk infrastructure. We found people who wanted to learn how to be a tour manager or stage tech when we were figuring out how to be a touring band. When we first started touring we had a couple of amateur booking agents, just guys trying out booking bands. I remember we were in Lansing, Michigan and we meet this guy, Scott, who books us at this place called Mac’s Bar. The first band plays and there’s, like, two people there. So Scott decides, ‘Fuck this, I’m moving the show to my house. I’m gonna call my friends.’ So we move it to his living room, and all of a sudden 50 people come and it was amazing. He paid us with the rider left by the band from the night before, which was half a bottle of whiskey and bunch of cereal. He’s still our tour manager today! Meeting a dedicated group of people coming up at the same time as you is amazing, because everyone is in it together and inspiring each other.

“The music means so much to people and they see how hard it is for DIY bands who are basically starving on the road. They may not be able to buy a record, but they want to do what they can to ensure the art they love continues to exist. As a fan, engaging with bands online is a huge morale boost for them, as is turning up to a show at any level. And if you have a group of friends that want to start a zine, print T-shirts or start a record label, you can do it anywhere. The internet has completely changed all of that and there’s a plethora of information online of how to do that. Do what you’re good at and whatever inspires you, you’ll find success in that and inspire others. I really believe that.”

The Menzingers play Rebellion Festival in Blackpool on Thursday and the O2 Forum Kentish Town in London on Friday. More info here. The band's latest album After The Party is available through Epitaph Records. Check it out on the stream below.

The Menzingers' Greg Barnett: "It Affects Me Mentally On A Daily Basis, Reading The News And Being So Upset"

On Hello Exile, The Menzingers are holding a mirror up to an America in turmoil, and adulthood ushers in a fresh outlook on life, concerns that were once personal are becoming quietly political…

The Menzingers contemplate life, punk and death as they continue to get older and wiser on Hello Exile