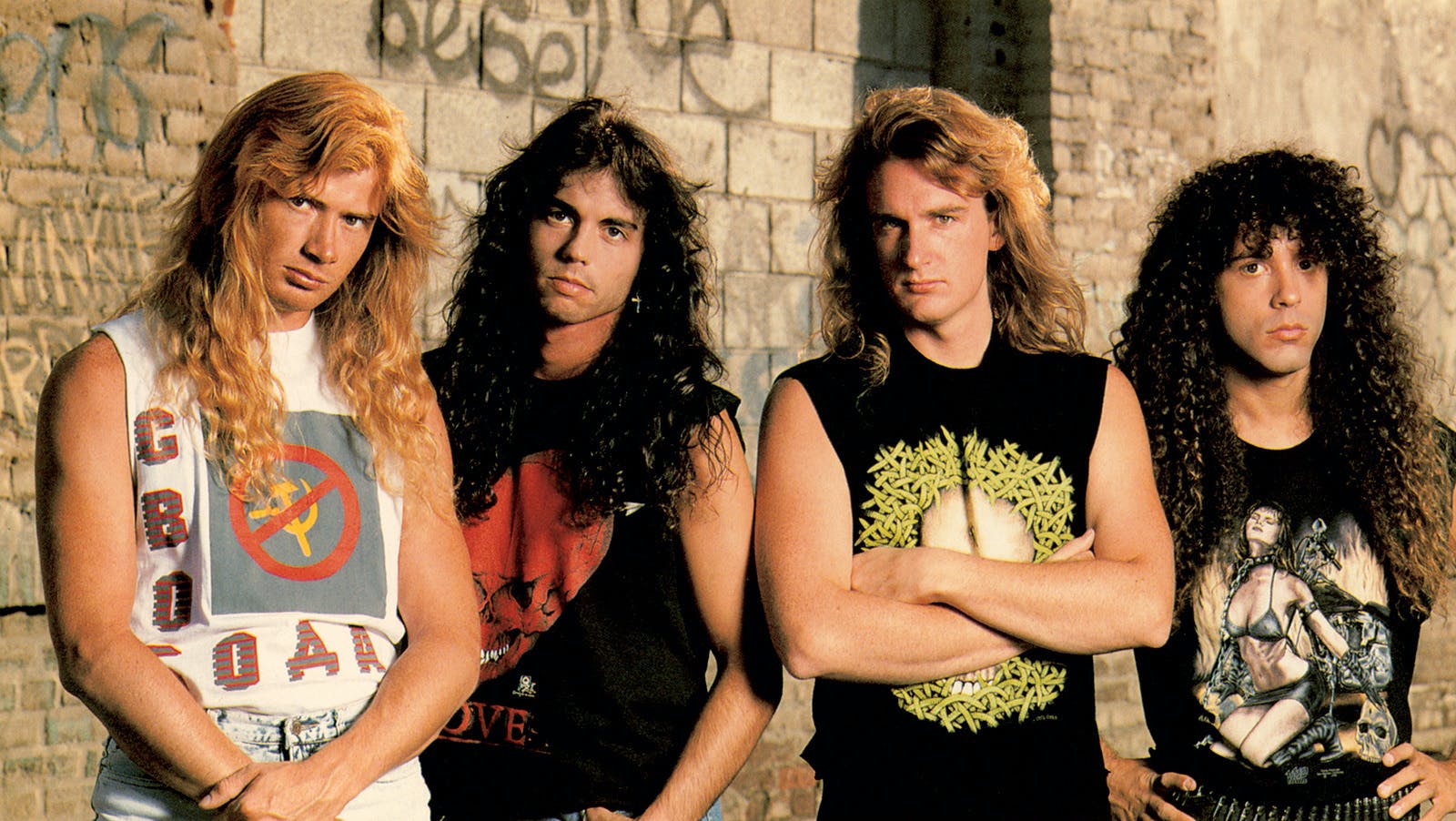 Dave Mustaine had said wiser things onstage. On the night of May 11, 1988, at The Forum in Antrim, Northern Ireland, after a day of drinking Guinness, the Megadeth frontman misinterpreted things when told about bootleg merch being sold for ‘The Cause’. Not understanding the minutiae of why American bands might be advised to watch their mouth around this sort of thing, or even realising that there was a right end of the stick to grasp despite the wrong end of it basically being on fire and covered in nails, Dave used these words to introduce a cover of the Sex Pistols’ Anarchy In The UK, inadvertently giving a shoutout to the IRA, topping it off by yelling, “Give Ireland back to the Irish!”

For this gaffe, Dave was rewarded with a riot in the audience and a lift back to the hotel in a bulletproof bus. Megadeth by this point were used to danger and chaos, usually thanks to drink and smack, but here was an entirely new level of madness that illustrated just how far things had snowballed. But it wasn’t the end of their problems. Six months later, after a triumphant show at Castle Donington, bassist David Ellefson had to finally call time-out, hold up his hands and admit that the drugs weren’t working. He wasn’t working. He was fucked. The next leg of touring was cancelled. He went to rehab.

This is the sort of headache that came with being in Megadeth at the time. Though already a success, they were also a snowstorm of different issues involving drugs, drink and, the related problems and stupidities therein catching up. Long-time guitarist Chris Poland had been given the boot after he got busted buying heroin just before a tour, to be replaced at no notice. “Who goes out to cop heroin when you’re heading out to a tour?” quizzes Dave today, although he also adds, “If you start hanging out with dangerous people, you do dangerous things.”

Other bands in thrash’s Big Four did not have this kind of carry on. Metallica’s boozing was famous, but it was banter, they were on top of it. Slayer’s problems largely involved their audiences going overly nuts, or churchy people having a problem with them. Anthrax didn’t have big problems, only big shorts.

“It was so terrible,” recalls Dave of how – what’s the word? – unhealthy things were at the time. “I didn’t think I was really cognisant of worrying that it could all be the end because of how fucked up we were. I was just living life, and we were paying bills with our soul.”

That Rust In Peace got made at all, hearing these words and knowing these things, may seem surprising. But in it, Megadeth booted off the ’90s with an album that was state-of-the-art, ultra-technical but still as invigorating as trying to outrun a car that’s trying to mow you down. The Antrim incident proved useful, providing a basis for the album’s furious opener, Holy Wars… The Punishment Due, while the madness that buzzed around the band perfectly suited the frantic Tornado Of Souls.

Such a web of stuff happened around Rust In Peace that it’s worth chronicling properly. Hence, Dave Mustaine has documented it all in a new book, Rust In Peace – The Inside Story Of The Megadeth Masterpiece, in which band members and other involved parties give their side of the stories to take you deep into the heart of one of the finest albums in metal history. There are differences of opinion, sly digs, smack, arguments, full-on callouts and occasional moments of having a laugh. It’s an appropriately spiky telling of the tale of a dangerously spiky record.

Megadeth didn’t limp into LA’s Rumbo Studios to record Rust In Peace in 1989 as a band at the end of the road, and emerge with Hollywood smiles and a redemptive record that vindicated their better decisions. Even with going into rehab himself, Dave says that it was simply what had to be done to finish the job. And, as successful musicians with a bit of wedge in their pocket, this was an easier option than it might have been.

“My resolve was pretty sharp,” he says. “Going back to rehab was just a byproduct of my behaviour. A lot of people who have a drug use issue, the man takes the drug and then the drug takes the man. People with a drug problem, they will compromise themselves and start stealing and stuff to get money for drugs. But guys who have plenty of money, they don’t have a drug problem, they have a drug use problem. A drug problem is so much more complicated. A drug use problem, people can go, ‘We wanna stop, we need to get a personal doctor, we need to have the fanciest medicine in the world.’”

With a new guitarist, Marty Friendman, and new-ish drummer Nick Menza, what would become for many people the classic Megadeth line-up was brought together. The two Daves' stills were already razor-sharp, but the injection of new blood from a guitarist so sharp he could probably shave with his fretting fingers, and a drummer who was simply devastating, turned the band into even more of a precision machine than before (even if Dave sarcastically points out that in the book the six-stringer changes his story on whether the material was done before he arrived).

Though their label, Capitol, had had “Seven presidents in the short time we’d been on there”, Dave says this didn’t actually cause undue concern. If anything, it meant you didn’t have someone coming to the studio and sticking their nose in. Nobody came to the studio at all, actually. No, the problem that would cause a migraine was thanks to Axl Rose, who gave producer Mike Clink the nod halfway through that Guns N’ Roses were ready to make Use Your Illusion (“That was really cheeky,” is Dave’s assessment). So off he went. Although Dave already had him in the crosshairs anyway.

“What didn’t come out in the book was: he had this dog, he brought this puppy over to the studio. It knocked my guitar over, and it started chewing on the wall fabric,” he recalls. “I thought, ‘Fuck, Mike – your dog’s gone.’ And then Mike came in and said, ‘Hey Axl called – I have to go,’ and I thought, ‘Good, you’re both gone – you and your fucking dog.’”

The finished album, dog or not, is a masterpiece. And one notable thing is that, through its finely-tuned sharpness, there is a sense of tension, as if the energy in these songs is being generated through the sheer force of bad vibes. Dave downplays this, saying, “I think [the tension] is a product of the times, what was going on in the background, like the Cold War,” but, in truth, the kind of fast, tight magnetism you hear on Hangar 18 or Take No Prisoners wouldn’t quite be there had everything been peachy. There is a hangover anger to these songs, a bristling sense of pushing forward and outstripping yourself out of stubbornness. But that’s what makes it so thrilling, and why it sold millions, and planted itself in history as one of the most important and brilliant metal albums ever made.

“Success was definitely a surprise,” notes Dave. “But I’m proud of that album and I’m grateful I got to make what we did together. It could be hard, but looking back at all this stuff, there were some great times. And it was one of the most amazing accomplishments we made as Megadeth.”

Write that down. It’s a story worth reading.

Rust In Peace – The Inside Story Of The Megadeth Masterpiece is published October 1 by Hachette Books.