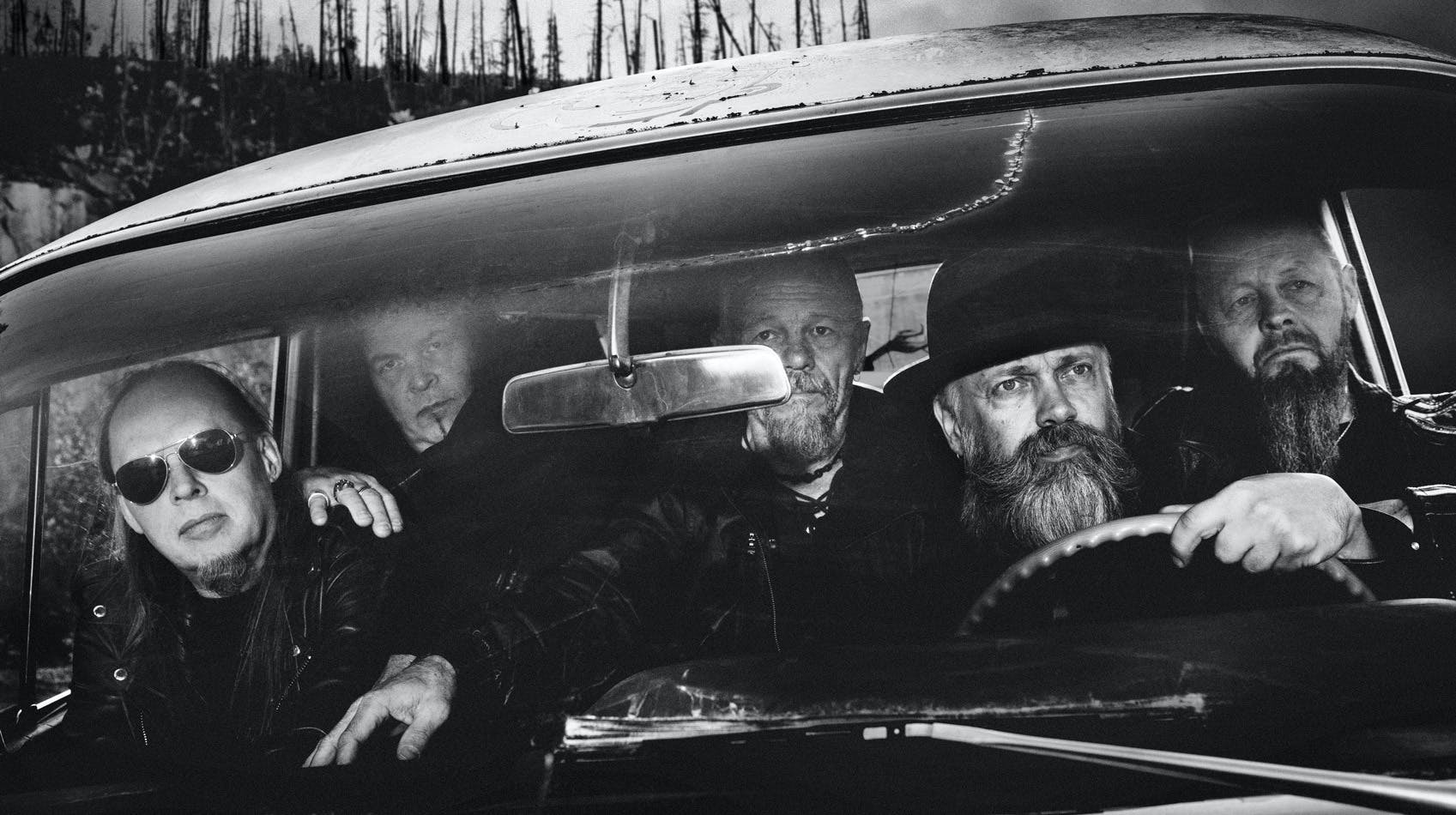 Candlemass are without a doubt one of the most influential and groundbreaking doom-metal bands in the history of heavy music. Starting in 1986 with their mammoth-sized debut album Epicus Doomicus Metallicus, they took the slow, bluesy blueprint laid out by Black Sabbath the previous decade and made it somehow heavier and more evil -- all with operatic, melodramatic, harrowing vocals of Johan Längqvist. To this day, the genre influenced by Candlemass calls itself “epic doom metal” -- a nod to the legacy of their debut.

Johan left the band right after the album was made to pursue his other projects at the time, including his band Jonah Quizz, and Candlemass songwriter/bassist Leif Edling hired a string of other singers -- most notably the priest-robe wearing frontman Messiah Marcolin, to carry on its legacy. However, Johan Längqvist has returned to the helm for the new record, Door To Doom, which sounds like the long-awaited sequel to Epicus Doomicus Metallicus, and is out this Friday via Napalm Records.

Kerrang! Is thrilled to exclusively stream the record in its entirety (which, fittingly enough, features Tony Iommi on the track Astorolus - The Great Octopus) right here:

In celebration of Johan’s return after a 30-year break from the band, we decided to call him up and chat about what he’s been up to, as well as his thoughts on the legacy of Epicus Doomicus Metallicus.

Kerrang!: So what have you been up to for the past 30 years?

Johan Längqvist: Well, the band I had just before the Epicus album was called Jonah Quizz. We were about to have a record contract at the time, and it was a pretty big thing at the time. But unfortunately something went wrong on the way, and we were called up by the record company and they told us that the part that was about to write the contract with us was shutting down. So it was very sad, but that’s the way it was at that time. But we continued to play.

Then I started studying [audio engineering], and I hopped around to a few other bands that didn’t turn out that well, but I’ve been writing songs all the way through the years and sometimes I’ve been called up by people to do a couple of records. But unfortunately most of the songs that other people wanted to hear through the years were not the heavy stuff. Sometimes it’s good to write other music other than the heavy stuff just to clean your head.

And I’ve got a family – I’ve got four kids who are grown up now, and I’ve got five grandchildren! So at the time, when we did Epicus, I had kids already – I got kids pretty early in life – and you have to earn your living and pay for your family. Music is a hard business. I’ve been working full-time the whole time, but songwriting has been a hobby.

Yeah, I have a full life. But [Candlemass and I have] met a few times over the years – since 2007 we’ve done a few gigs. And that’s about all the time up until now! But I’ve been into music all my life, and I’ve been writing songs, so I’ve got a lot of songs at home in my home-studio that I’ve built myself. It’s been a part of my life all of my life, so I’ve been into music for many years in one way or another.

How do your grandkids feel about you singing metal?

They’re not that big – they’re [all toddlers]. But last week one of them told me that they wanted to see me on YouTube. [laughs] That was probably the first time they heard me singing. I’ve sang for them, of course, just like a grandfather should do. Not heavy metal, though! They’re not into that…yet.

So how did the band ask you to come back? What was that phone call like?

Well, it happened pretty quickly, because they called me up in the end of August and they asked me if I was interested. I was thinking that this is the very right point in my life – my kids are all grown up – to come come over to them and listen to what they’ve done. And I said, ‘Yeah, I’m interested!’ And the day after that, we went over to the studio and listened to the songs and I said, ‘Wow, these are great songs.’ I really like the songs on this new album. And we actually started recording right away. So it all happened very quickly. We had talked about doing something together a couple of times through the years, and I as I said we knew each other pretty well. But when he called me up this last time and I heard the new album and we went down to the studio, it came up naturally. I started singing right away, and we did one or two songs the first day I was there. And we caught the spirit that the vocals should have for the songs. It was very fun doing that.

I didn’t work with him—by the time I came in, that was already done. All I can say is that I’ve always been a big Black Sabbath fan and Black Sabbath has done a lot of the greatest albums, in my opinion, so of course it’s a great honor. When I came down and they told me about it, I said, ‘Wow. That man is the king of guitar riffs!’

When you were making Epicus, were you aware that you were a part of something that was going to be really huge?

I don’t think any one of us knew how big that album was going to get in the end at the end. No way. I think they even had problems finding a singer in the very beginning because it was [groundbreaking] music. No one had heard anything like that at that time. The songs were before their time.

Absolutely. It was so different than anything that came before it, and influenced so many things to come later.

Yeah! I went and did my own thing, but a couple of years later I understood, ‘My god, this album is popular.’ I think we all were in the same position in the beginning—I did vocals on that album, and I don’t think even they knew what it would be in the end. There was so much resistance against that type of music at that time.

Right. It was so heavy and operatic—nothing was like it. I’m sure it weirded a lot of people out.

Yeah. Everyone was listening to Judas Priest and Black Sabbath. When this came, in Sweden, it was very different. But awesome to sing on!

Do fans ever see you and stop you to say how much Epicus means to them?

It’s happened a few times at the gigs I’ve done with Candlemass. I know now that it has meant so much to a lot of people. And they are so friendly! It’s a great honor to meet them, and it’s why it was important for me, if I was going to join the band again for this album, it has to be for real. And it is, I can tell. We’re really having a good time.

Do you have a particular favorite song to sing on Door To Doom?

No, actually! I can’t give you a favorite. I kind of like them all very much. I think it’s a good album all the way through. I think people who listen to it will feel the same. At least that’s my opinion, because I’m comfortable with all of the songs. Even the smooth ballad, the Bridge of the Blind – it’s sort of like an easy, cool wind blowing through you. A nice smooth song. That’s not exactly what Candlemass used to do, but I like it. I like all of the songs very much.

Some of the songs, you have to give them a couple of listens. And then you find the greatness in them. All I can say is I gave it 110%.

I’m a firm believer that you don’t ever fully understand music the first time you hear it.

Yeah, I think so. You can’t take them in just right. You can say, ‘Oh, that sounds interesting,’ but after a few listens, you get it.

How did you learn to sing the way you do?

Oh, it happened the way it does so often in life: I had a couple of friends who were talking about starting a band and needed someone to sing. And that person was me! There were no instruments left to play. I just wrote songs and sang them – I haven’t thought much about it, actually. Of course I like to sing all the heavy stuff. Everyone my age likes Rob Halford, or Ronnie James Dio, or all of the great vocalists from the 70s and 80s, so they were my role models. And I tried to do things they way they did them, but I found my own style after a couple of years. That’s how it started. I have never taken any lessons or anything like that.

That’s wild to me because your voice sounds so classically trained.

Yeah, I can tell you it’s not! [laughs] Maybe it’s got the sound of how life can be inside it. I don’t know.