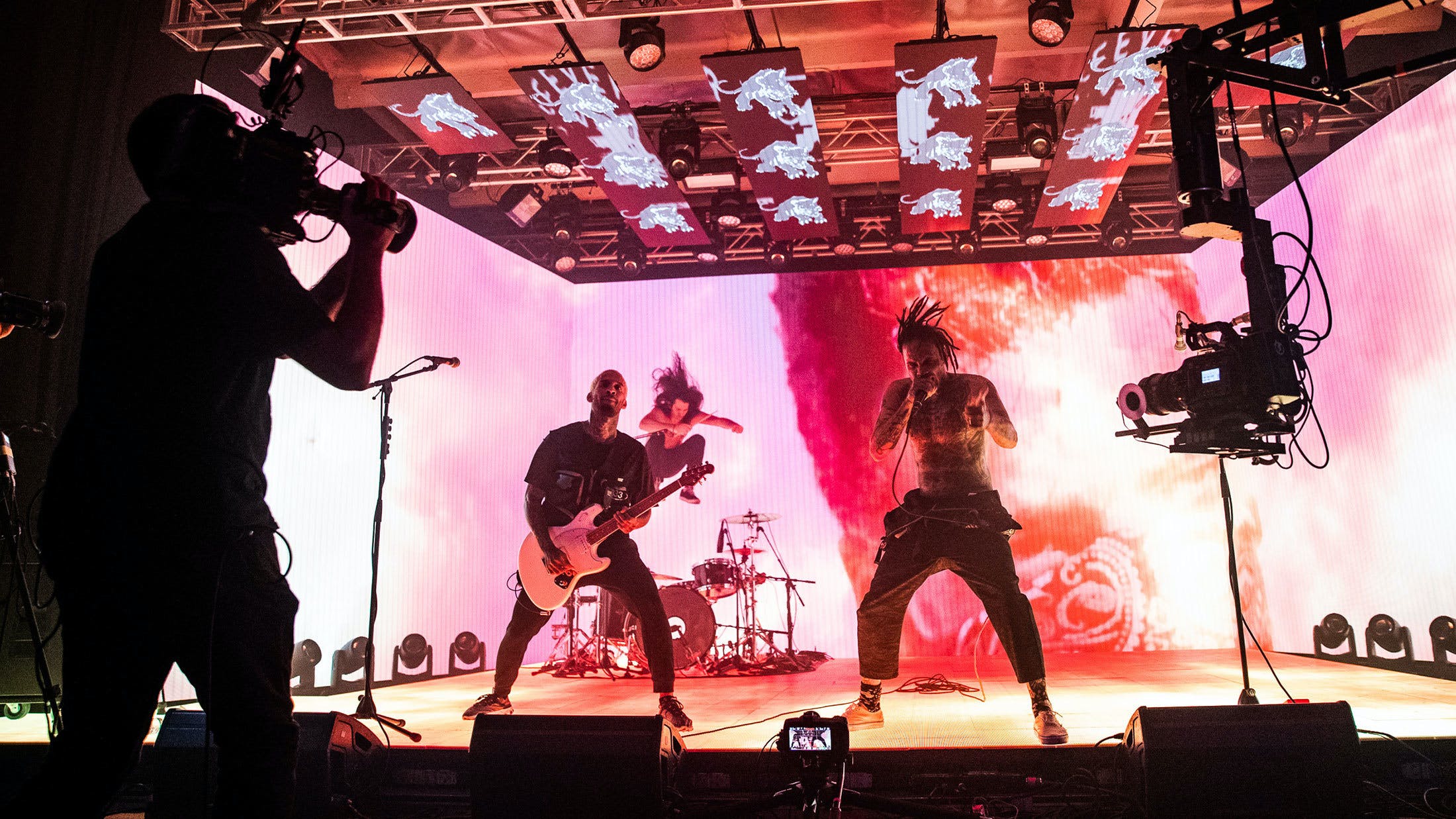 The last time we saw FEVER 333 on livestream was at the start of June, raising money for the Minnesota Freedom Fund and Black Lives Matter in the wake of George Floyd’s death just over a week prior. It was a powerful piece of performance art, and will stand as a landmark in alternative music’s reaction to the ongoing political, societal and cultural shitshow that is 2020.

But FEVER 333 aren't ones to sit back and watched the world burn from the confines of their futuristic cube stage of screens and strobes; they’ve dropped an eight-track call to arms in the form of WRONG GENERATION, and are embarking on a livestream ‘world tour’ – playing six shows across a week to benefit different timezones. The UK/European date of the tour just so happens to coincide with their EP launch, and for just over an hour, eyes and ears of a continent are locked on to the LA firebrands.

In the same cuboid set-up as their previous stream, a riot squad march into the centre of floor, keeping frontman Jason Aalon Butler at bay as he screams bloody murder of new track BITE BACK from behind a wall of shields. FEVER 333 did not come here to play and despite the lack of a crowd, they’re no less crazed with Jason hurtling around the room and guitarist Stephen Harrison doing his best helicopter impression, while Aric Improta tries to bury his drum kit through sheer force alone.

While the stage itself is the same as their Long Live The Innocent livestream, the band’s attire has been given an upgrade, with Jason in a jumpsuit adorned with a bounty of pockets, and Stephen appears to be an a 333-branded stab vest. We are witnessing the realtime evolution of modern rock’s most outspoken band, who have said more about the world they inhabit in two EPs and one full-length than most can muster in a lifetime.

But it’s not just the songs or violent spectacle of watching Jason break stuff that makes FEVER 333 such a formidable force, it’s the words they speak. There’s no getting around the fact that watching a show on your laptop is a weak substitute for the real thing, and it is jarring when the band finish a song to complete silence, but Jason's impassioned speeches between tracks hit just as hard onscreen as they do onstage. Throughout the 13-track set, he addresses those in attendance while staring down the barrel of the lens, speaking “uncomfortable truths”: whether it’s about people finding the concept of privilege offensive (before Made An America) or “the idea of whiteness” and the structures that have been put in place to sustain it before an epic rendition of Supremacy – with guest vocalist Erica Silva’s soaring vocals expanding the track until their performance box is creaking at the edges.

And so the (r)evolution continues. Mid-way through the set, Jason sits cross-legged on the floor, discussing the birth of his second son, openly reckoning with the dilemma of bringing a new life into a world he knows is broken. It’s a touching moment and one that slows the momentum of FEVER’s speeding bullet with Jason picking up the guitar for AM I HERE?. It’s a middle finger to all those who say the band is sloganeering without substance, although their war-cry of ‘You fucked with the wrong generation’ hits like a freight train. But it also runs deeper than words you can put on a T-shirt, connecting with the band’s young, active and angry fanbase on a level no politician can. Were this a ‘U.S. date’ on the tour, the band would undoubtedly be talking about the upcoming election, but tonight they paint with broad brushstrokes, ironically connecting through computers to a fanbase that knows the dangers and flaws of binary thinking.

As the final triple threat of Burn It, PRESENCE IS STRENGTH and Hunting Season ricochet around this LED cocoon, Jason screams with a thousand voices, “The fight is not over, there will be pain, there will be sacrifice, there will be discomfort. You will remain uncomfortable as long as you don’t speak.” And if FEVER 333 can accomplish anything – more than digital ticket sales, more than merch sales, more than streaming numbers – it’s to encourage, and urge a generation not to sit idly by and to speak up. The fever isn’t coming, it has arrived.

FEVER 333's UK headline demonstrations and performances at Reading & Leeds this weekend have been cancelled.