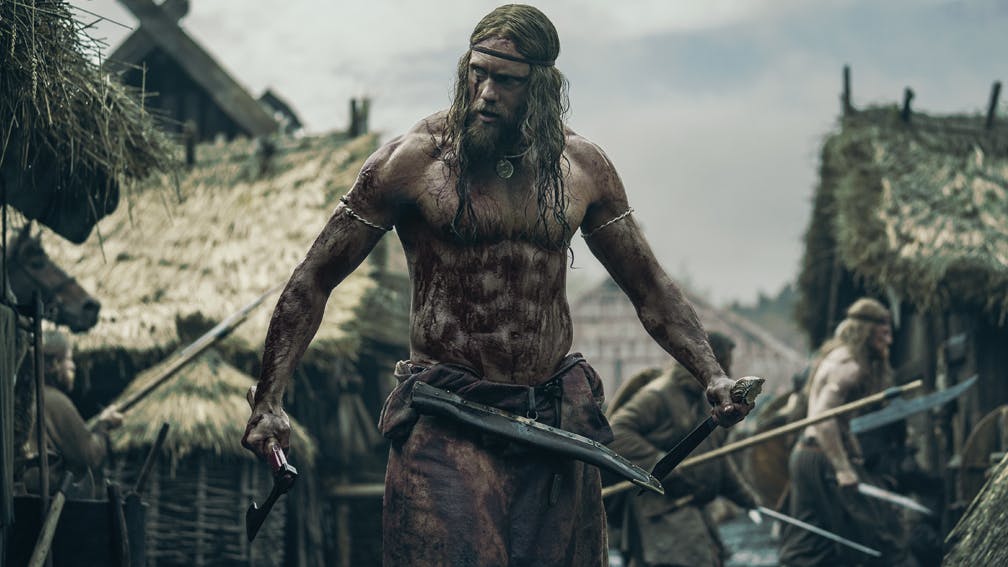 Robert Eggers reportedly listened to a lot of metal while making The Northman. It shows. Where the prodigiously talented New Hampshire director has previously wrought tension from claustrophobic confinement – within the dense forest of darkly delicious 2015 chiller The Witch, and the titular phallic beacon of 2019’s delirious psychological horror The Lighthouse – his astonishing third outing is a Viking-centric explosion of violence and vengeance, with the carnage strewn outrageously across medieval Northern Europe.

Working with Icelandic poet Sjón, Eggers delves into the Old Norse legend of Amleth, a young prince obsessed with revenge on the uncle who murdered his father and took his widowed mother as wife. Where that source material once inspired Shakespeare’s Hamlet, however, The Northman repurposes it into a far more primal piece, at once muscularly straightforward and nightmarishly hallucinogenic. Think Conan The Barbarian fermented in the murky weirdness of the director’s previous work. Blood flows, minds break, soliloquies are not on the menu.

Alexander Skarsgård is a force of nature in the lead role. The Swedish actor has made no secret of his desire to play a Viking over the years, and although many fans have lamented that he wasn’t picked as Marvel’s Thor, the role of Amleth is a far better fit for his considerable talents, pouring torrents of wrath, rage and vulnerability into an endlessly compelling (anti-)hero. Anya Taylor-Joy, meanwhile, repays Eggers for her breakout role in The Witch with another ambiguous enchantress: Olga of the Birch Forest. Not just Amleth’s romantic match, she is a fascinating mirror image, counterpointing his bludgeon with her subterfuge, his single-mindedness with her complex cunning.

Around them, an ensemble of veteran talents weave themselves into the grimy, atmospheric tapestry. Danish actor Claes Bang (BBC’s Dracula) brings menace, but also relatability to ostensibly ‘evil’ uncle Fjölnir. Nicole Kidman is far more than a mother in need of rescue as Queen Gudrún, as is Ethan Hawke more than the father in need of vengeance as the brilliantly-named King Aurvandill War-Raven. Best of all, however, are the extended cameos by Willem Dafoe as Heimer the Fool and legendary Icelandic musical force Björk as an unnamed, elaborately-headdressed seeress. Performed with impish otherworldliness, both are key to driving Amleth’s quest, and connecting the film’s muddy, bloody realism to its transcendental flights into the realm of Norse gods and monsters.

A literal epic that careers, across its 137 minutes, from bloodthirsty war-raids to trippy moonlit murder-sprees to a climactic sword fight in the glow of an erupting volcano, it is tempting to describe The Northman as a pure cinematic distillation of heavy music’s incendiary ballast, but the comparisons run deeper than that. In its callous animal-skinned berserkers, blood-curdling ritual sacrifice and unflinching, fastidiously-researched period detail, there is the fact-driven fervour of latter-day Amon Amarth. Its cold, volcanic landscapes evoke the strange grandeur of Enslaved. Even the undertones of inexorable tragedy conjure the same doomed heroism as Bathory.

Much as Amleth’s oft-muttered mantra “I will avenge you father; I will save you mother; I will kill you Fjölnir!” goes from chest-thumping battle-cry to hollow justification of the butchery unleashed, Eggers’ film ultimately sheds its action-adventure skin to reveal his most gut-lurching horror to date, built not on impressive body-count but the narcotic, soul-rotting nature of revenge. Staggering.