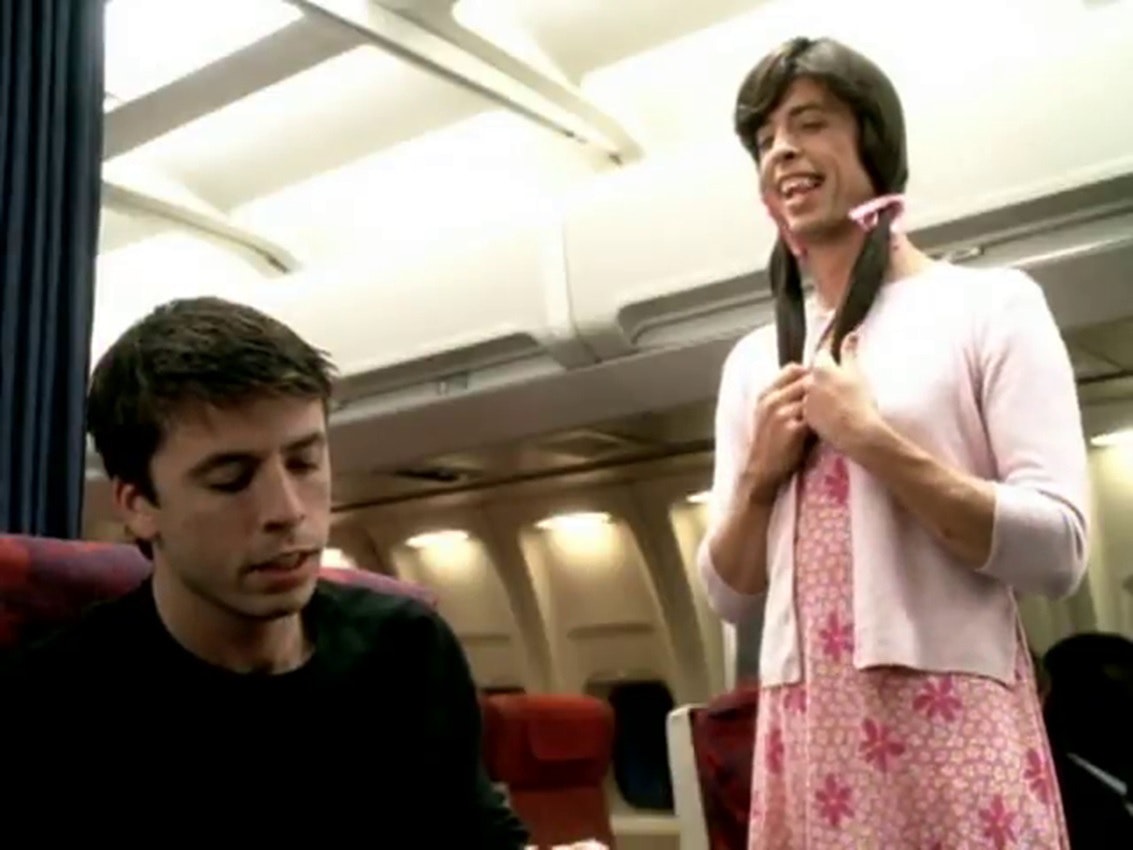 There’s a parallel universe out there somewhere in which Dave Grohl is the biggest comedy star of his generation; where the Foo Fighters frontman put his enormous charisma to work in movies instead of music, and ended up as a sort of Will Ferrell / Adam Sandler / Jack Black figure.

We’re blessed enough to live in the one where he’s probably the most beloved figure in rock however, a man renowned for being nice, funny and charming in an industry where you don’t need to be any of those things.

He’s stretched his comedic chops in plenty of videos, but none more so than the GRAMMY-winning clip for Learn To Fly, in which he, Taylor Hawkins and Nate Mendel (this was a period without Pat Smear, which is a shame as Pat Smear would quite clearly have been amazing in this video) get to grips with some serious wigs as they adopt multiple roles.

Take your seats, fasten your seat belts and let’s launch ourselves into the Learn To Fly video.

0.04
Look, it’s Kyle Gass! Both of Tenacious D are here! After meeting in an LA acting troupe in 1987 and becoming friends, they formed the band in 1994 and soon became regulars at the famous Viper Room. Peter Stahl, vocalist of Grohl’s former band Scream (and brother of erstwhile Foo Fighter Franz Stahl) worked there and convinced a reluctant Grohl to watch a show. They struck up a friendship and the rest is history.

0.05
In something of a recurring tradition for Foo Fighters, we start off with a Muzak, elevator-esque version of their previous single, as performed by the synthesiser duo The Moog Cookbook. Their version of Big Me began the Monkey Wrench video, and here’s their cover of Everlong.

0.15
Gass’s nametag says Kage, a name he frequently goes by with Tenacious D. Black’s is never quite shown, but is likely to say Jables.

0.19
Grohl is, straight away putting a LOT into his performance. Let’s keep a running total of Grohl Roles: one so far.

0.30
A second Grohl Role, as the pilot. That’s two moustaches and all. Nate Mendel and Taylor Hawkins are right there with him, and Grohl appears to be doing that thing that was later popularised by Malcolm in The Middle where if you trick someone into looking at your finger and thumb making a circle you get to hit them.

0.31
We don’t want to make too much of a big deal of this, but Taylor Hawkins looks incredible as a woman.

0.41
He is just going for it facially, isn’t he? Amazing. Grohl, Mendel and Hawkins have all done some acting. Grohl played Satan in Tenacious D: The Pick Of Destiny, Mendel and Hawkins appeared together in indie film Our Burden Is Light, and Hawkins played Iggy Pop in CBGB, a movie about the legendary rock venue.

0.50
Wait, what’s this? The band, as themselves, are also boarding the flight. Layers on layers! This video was directed by Jesse Peretz, who was a member of the Lemonheads before they got big with It’s A Shame About Ray. He directed several of the videos for that album, though, later moving on to working with other bands – the Mentos-filled Big Me video was the first time he worked with Foo Fighters, and he later did The One and Low with them as well. He has since made five feature films as well as working on shows like Girls, GLOW and Orange Is The New Black.

1.06
Grohl-Grohl eye contact. Amazing. It’s nice to know that even in the universe of the Learn To Fly video, seeing Dave Grohl is a Big Deal. Foo Fighters were at the Kerrang! Awards this year and even the most been-there-done-that professionals were craning their necks as soon as he walked in. The whole atmosphere of the room changed.

1.12
God damn it. This is what it used to be like watching a film on a plane – everyone watching the same thing on a rubbish screen miles in front. It was abysmal.

1.13
Grohl describes the song as being about “the search for some sort of inspiration, the search for signs of life that will make you feel alive”. The whole album, lyrically, is about “just settling in to the next phase of your life, that place where you can sit back and relax because there had been so much crazy shit in the past three years”. Musically it was a step away from what Grohl saw happening around him in music. He told Kerrang! in 2006 “I'd been living in Los Angeles for about a year and a half, just being a drunk, getting fucked up every night and doing horrible shit, and I'd finally got sick of that. I was like, 'I've gotta go back to Virginia or I'll fucking die in this place.' So I bought this great house in Virginia and told everyone I was building a studio in the basement. It was literally a basement with sleeping bags on the walls. At the time the nu-metal thing had become huge with Korn and Limp Bizkit, so the dynamic of popular rock music had become so caveman. I thought, 'Let's write some songs. I'm sick of screaming and I'm sick of my distortion pedal.'”

1.15
We don’t want to make too much of a big deal of this, but Taylor Hawkins looks incredible as a woman.

1.18
There aren’t acting awards for music videos, but Grohl’s “phwoar” face is Oscar-worthy stuff. Mendel is more subtle, but no less excellent.

1.24
We don’t want to make too much of a big deal of this, but Taylor Hawkins looks incredible as a woman.

1.25
There is speculation that “Looking for something to help me burn out bright” might be a reference to Grohl’s friend and former Nirvana bandmate Kurt Cobain’s suicide note, which quoted the Neil Young lyric 'It is better to burn out than to fade away'.

1.29
That, surely, is the cut that won the GRAMMY. The perfect comic timing of Grohl-as-young-girl re-entering the frame and the perfect cut away from her frown. Absolutely glorious stuff.

1.35
We don’t want to make too much of a big deal of this, but Taylor Hawkins looks incredible as a woman.

1.39
Elements of the plot of this video (if it can really be said to have one) are listed from the films Airport 1975 and its sequel Airport ‘77, both of which were also parodied in the film Airplane!, which is one of the funniest films ever made.

1.49
We don’t want to make too much of a big deal of this, but Taylor Hawkins looks incredible as a woman.

1.53
The young girl is, of course, holding a copy of There Is Nothing Left To Lose, which wasn’t out yet. Her copy comes in a plastic jewel case, while the album actually came in a folding cardboard case. Early copies came with a temporary tattoo of the band’s logo made to match Grohl’s real one. Madly, this video also came on the album as part of an Enhanced CD package.

1.55
Hang on, with this appearance as Large-Headed Baby, where do the Foos lie in terms of multi-roles?

2.06
Don’t do this. If you’re on a flight with your hero, by all means say hello, but not if they’re asleep.

2.12
One of the few split-screen shots in the video, in which two characters played by the same Foo Fighter share the screen.

2.22
Interestingly, Grohl isn’t a huge fan of Learn To Fly, describing it as one of his least favourite tracks on There Is Nothing Left To Lose. It’s a very well-loved tune though - in 2015, a group of 1,000 Italian musicians recorded a mass cover version in a successful bid to get Foo Fighters to play a show there.

2.27
Another two-Grohl split-screen shot, in which Pilot Grohl might slightly be checking out Young Girl Grohl.

2.34
All three Foos now turn down the tainted coffee because they’re busy drinking booze, a subtly rock’n’roll message that you can imagine some people being unimpressed with.

2.39
If you enjoy this brief scene of Grohl holding a drink, the Enhanced CD contained an Easter Egg video of a drunk Dave Grohl slurring about being in Nirvana.

2.56
We made a half-hearted attempt to find this owl necklace on Etsy, to no avail.

3.04
So, what does that microphone do exactly?

3.37
Nuns are also present in Airplane! and the Airport films.

4.24
The pilots’ dialogue is absolutely not being recorded, and has very much been added on later – there’d be no reason to record sound while making the music video, so it’s been chucked on later like a Steven Seagal film. Not a problem in the slightest and all lovely stuff.

It’s the most well-deserved GRAMMY in history, isn’t it? Awesomely silly, incredibly well done and we don’t want to make too much of a big deal of this, but Taylor Hawkins looks incredible as a woman.