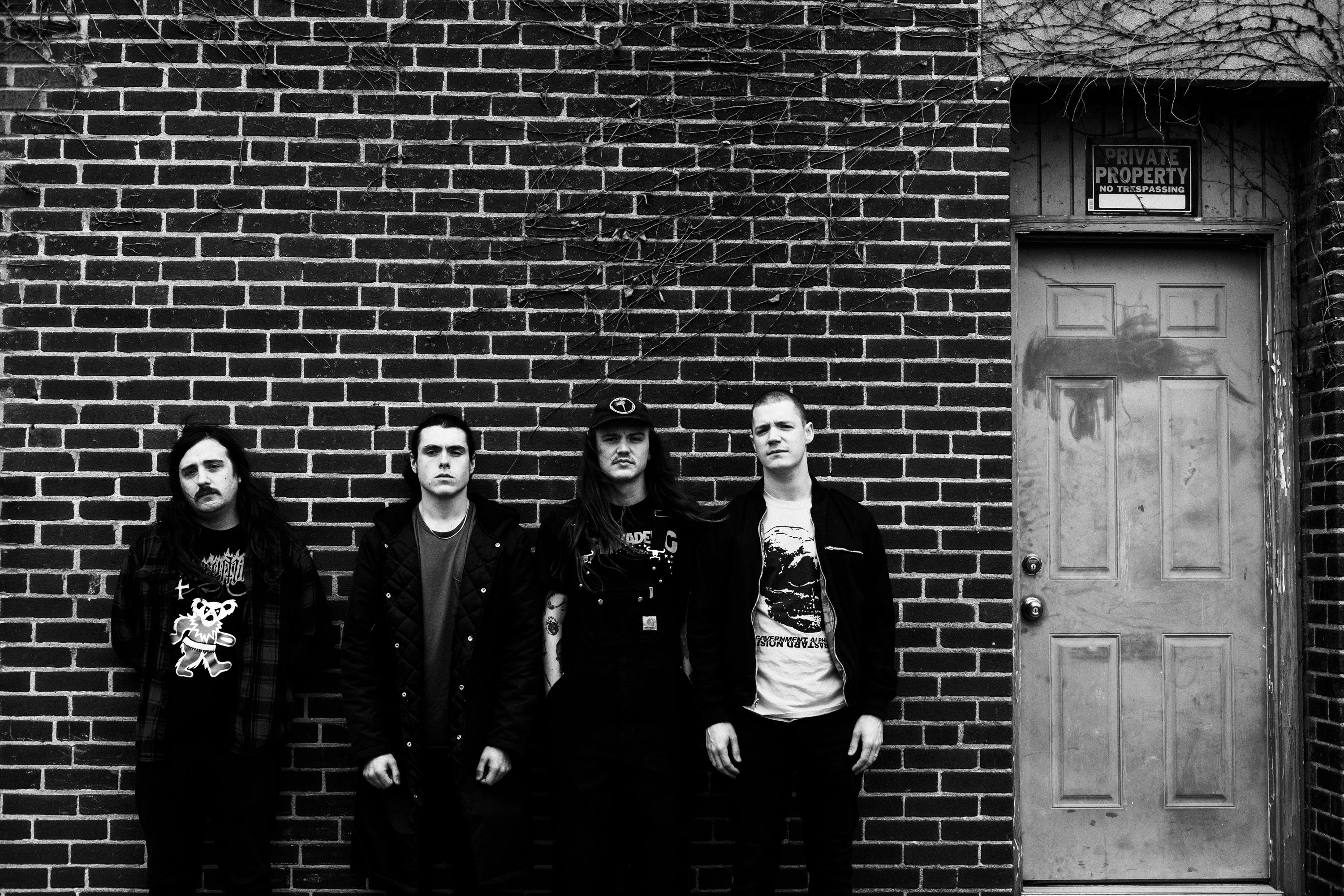 In their 10 years as a band, Full of Hell have been known to play fast, write fast, and change fast. The East Coast quartet, currently spread between Ocean City, MD, Philly, and Central PA, have dropped over 20 projects that encompass nearly every corner of the extreme music universe. They began as a downright evil hardcore band on their 2011 full-length, Roots of Earth Are Consuming My Home, and then married those savage chugs with chaotic grindcore bursts on 2013’s Rudiments of Mutilation.

But in those same two years, Full of Hell released four splits (one with then-upstarts Code Orange) and a four-volume EP series called FOH Noise. The band used those projects to expand the breadth of their palette, and they developed a particular hankering for fiendish harsh noise. For a band that was still largely embraced by the hardcore community, Full of Hell’s next two albums were unexpected left turns that fully embraced their most inaccessible tendencies (by hardcore-adjacent standards).

In 2014, they released a collaborative record with the famed Japanese noise artist Merzbow, and then followed that in 2015 by collaborating with the experimental metal duo, The Body. By the time they unleashed their next solo outing, 2017’s Kurt Ballou-produced Trumpeting Ecstasy, they had pivoted to ear-piercing deathgrind. And then later that year they dropped another, even more hellish noise-metal album with The Body.

So for their 2019 full-length and Relapse Records debut Weeping Choir, the band was literally able to tap themselves as their main musical inspiration.

“It was my conscious effort to take bits of what I’ve liked from every record we’ve done so far,” says guitarist and primary songwriter Spencer Hazard. “So that’s why there’s more death metal influenced songs, which we’ve taken from Trumpeting [Ecstasy]. Or more experimental, grindy type stuff—which is from Rudiments [of Mutilation]. But even some hardcore parts that we’ve taken from Roots of Earth [Are Consuming My Home].”

Weeping Choir is a nose-dive to the depths of hell right from its very first note. No foreboding noise intro, no Werner Herzog soundbite, just a devastating blast beat and then a demonic back-and-forth between shrieking lead vocalist/noise wizard Dylan Walker and bellowing bassist Sam DiGristine. From there, the band fuse nearly every genre they’ve brushed against into mostly sub-two-minute spasms. They whip from pounding hardcore thuds to mechanical death metal sweeps; crash into skin-searing bouts of unearthly grind; and splice it all with infernal flames of caustic noise. It’s the most cohesive and true to their range that they’ve ever sounded, yet it’s the first Full of Hell album that the members wrote separate from one another.

“[This] was the first time I had to come up with full songs,” Spencer says. In the past, he’d introduce a riff or an arrangement at practice, and then the band would build the song outward from there. This time, since they were each living in different cities, he had to construct entire tracks on his own—which inadvertently yielded their most challenging material to date.

“This record definitely had parts where I wrote the riff and it sounded really cool, but once we got all together we were like, ‘this is in some weird time signature I don’t even know how to count it,’ kind of thing,” he says. “Even when we got in the studio, Kurt [Ballou] was like, ‘I don’t know what time signature that is.’”

Beyond the difficulty of the material itself, Spencer says that Ballou (the legendary Converge guitarist and renowned producer) pushed them a lot harder in the studio than he did during the Trumpeting Ecstasy sessions.

“[On] Trumpeting he kind of let us do our own thing. But this time he was definitely like, ‘No, do it again. You can do better.’ I feel like he was able to get better takes out of us this time.”

Spencer also thinks Ballou’s production on this record best captures what they sound like when they play live, which is something they’ve done a whole lot of since Trumpeting Ecstasy dropped. They toured almost nonstop for two years, travelling with the likes of Entombed A.D., Gatecreeper, Cattle Decapitation, and most notably, Cavalera Conspiracy.

“That was an interesting crowd,” Spencer says of the tour with the Cavalera brothers, in which they were playing the beloved Sepultura album, Roots, in full. “And we obviously love Sepultura, but Roots is a whole different beast of Sepultura compared to Arise or Beneath the Remains. It’s obviously a more nu-metal, groove-metal type crowd...So when we’re getting up on stage and playing nothing but blast beats and having walls of noise, that’s hard for a lot of more mainstream metal fans to digest.”

Therefore, the band had to figure out how to adjust their setlist to entertain a crowd where “maybe 60 percent of the room absolutely hates us.” The inverse of that was the tour with deathgrind stalwarts Cattle Decapitation.

“With Cattle Decapitation, you could tell that it’s younger kids first trying to get into extreme metal. So with that setlist it’s like, let’s try to make it as crazy and chaotic as possible because those kids may have never seen anything like that.”

With so many diverse tours and varying sonic iterations behind them, pushing boundaries is a central tenet to Full of Hell’s creative ethos. Nevertheless, even the guys who make music this frightening are at least a little concerned with how their fanbase will react to new material.

“I think every band can say, ‘Oh I don’t give a fuck what the fans say.’ But it’s always in the back of your mind,” Spencer says. “Cause it’s like, no matter what you do artistically, you may get a million compliments. But then that one bad compliment is going to stick out to you forever.”

But at the end of the day, Full of Hell’s main priority is keeping themselves entertained.

“We don’t consciously set out and be like, ‘Oh we gotta make sure the hardcore kids still like us.’ I mean it’s good if they do, obviously. But that’s not our thing. We’ve had plenty of people turn their backs on us because we’ve gotten too noisy or experimental compared to our earlier releases. But if that’s the case, then oh well.”