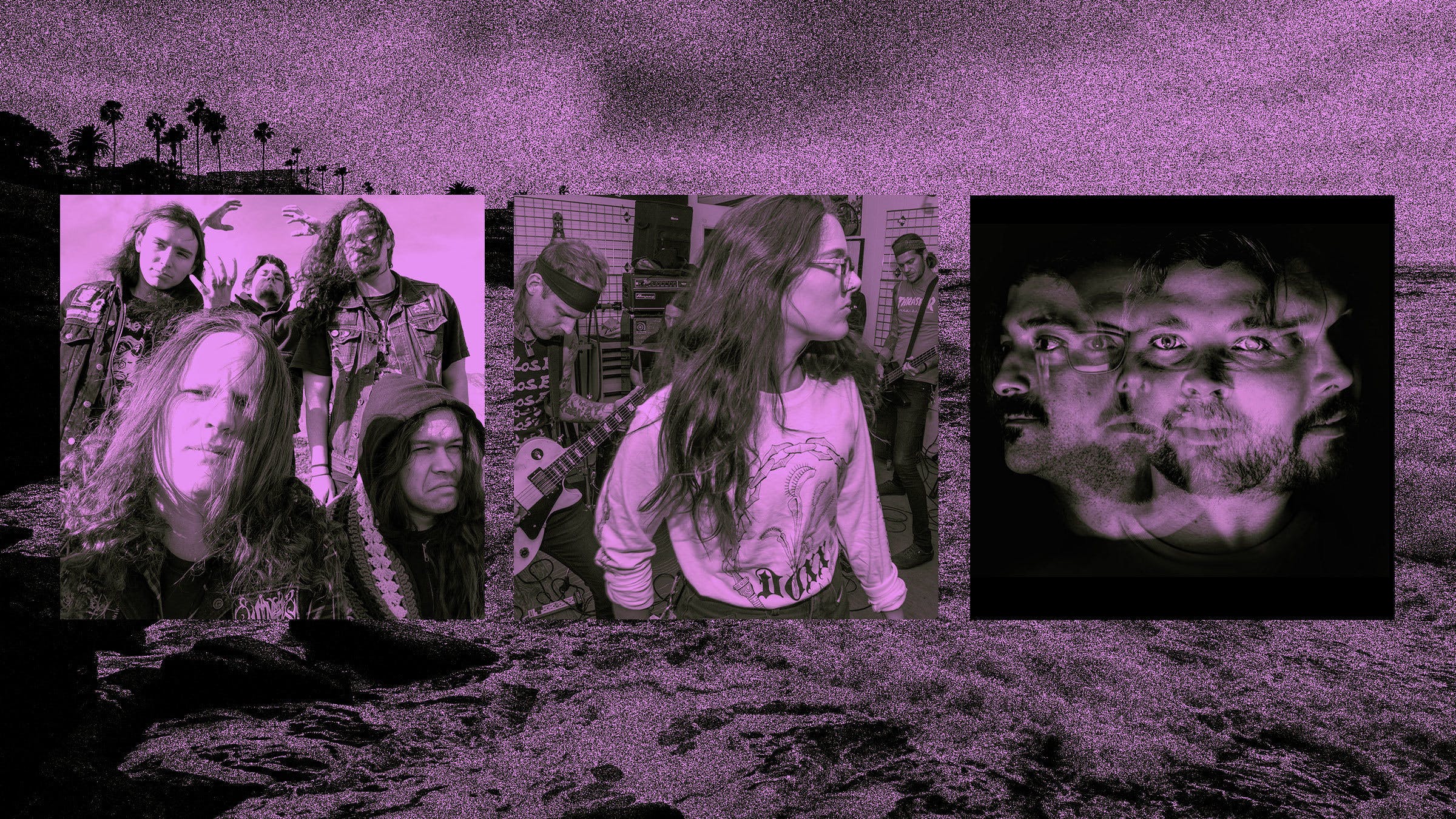 San Diego’s never been known as a metal city. Perhaps it has something to do with living in the shadow of both Los Angeles and the Bay Area, two monoliths in terms of shaping the sound of metal as we know it. Or perhaps it’s simply because the city’s so laid back that aggressive, intense music isn’t the first thing anyone’s going to associate with it. But history offers a counterpoint to that notion. It was in San Diego that proto-metal act Iron Butterfly was born. It was also in San Diego where Ratt formed, as well as deathgrind heroes Cattle Decapitation and industrial metal-machine architect Author & Punisher.

From the outside, the scene might seem small, but there are countless bands in the city who are revealing it to be a reliably strong hub for metal, hardcore and noise rock. Something about living in a town where the sun’s always shining has a tendency to bring out the beast within, and events like the Heavy Metal Swap Meet and venues like Brick by Brick help to keep that beast well fed. There’s no shortage of great, heavy bands in San Diego -- not all of whom can be mentioned here -- but you should make sure to give a listen to these eight bands now.

When Cave Bastard’s The Bleak Shall Devour The Earth began to pick up attention after its 2018 release, it seemed other cities were starting to catch on to San Diego’s homegrown brand of ultra-heavy menace, and with good reason. Cave Bastard are one of the city’s strongest bands tapping into a contemporary strain of old school death metal. Featuring alumni of a number of great local acts, including Ritual Torture and Temblad, Cave Bastard are as eclectic as they are relentless, balancing technicality and a melodic intensity that should serve as a reminder as to what made death metal so appealing in the first place.

“I’ve seen [San Diego’s metal scene] change a lot over the years,” says vocalist Steve Pearce. “For a while it’ll be slow, but then it’s badass. Currently, it’s really great. There’s so much to do here. It’s not other shows you’re up against, it’s the beach and the desert. But everyone here seems to be really open minded. Author & Punisher fans are Cattle Decapitation fans, or they’re fans of other stuff. You’re able to mix all that together, which is really cool.”

Crossover thrash speed-freaks Pissed Regardless harbor a snotty punk rock streak in their bruising two-minute beatdowns. The band’s wheelhouse is creating brief-but-brutal hardcore that nods to classic Suicidal Tendencies while displaying a contemporary edge in line with the likes of Toxic Holocaust and Municipal Waste. The band’s 2018 EP Feed The Birds is a concise summary of the band’s kamikaze shitstorm: fun and irreverent, and true to their name, extremely pissed off.

“We came from punk rock—even pop-punk,” says drummer Tim Whetsel. “A lot of the bands we play with are punk and hardcore bands. We started off as a punk band and we just worked from those influences. The music is always evolving. Listening to the same thing can get redundant. We don’t want to end up recording an album and have it be our Death Magnetic.” The punk attitude is also what informs their attitude about the scene. “A lot of the time, playing shows now, it’s about craft beer and the hangout,” he says. “But what about free and DIY shows? It should just be about playing a fucking cool show.”

Started by members of long-running crust group Age of Collapse in 2017, hardcore bruisers Therapy cast aside the epic song lengths and extended solos in favor of a go-for-the-jugular d-beat approach. Their debut self-titled LP on Volar Records fills just one side of vinyl, but not a minute is wasted—every 90-second song detonates with maximum impact and efficiency. And much like their influences in classic anarchopunk, they espouse a perspective that elevates people over the powers that be.

“[Therapy’s] music is centered on inclusivity, progressive values and a DIY ethic,” says vocalist Chris McQueen, who originally hails from Canada. “Some of it is about another country that’s imperialist and capitalist, but seeing it on steroids when I’ve come to the States.”

At home, however, the band is optimistic about what they’re seeing. “There are a lot of great bands in San Diego. And that gets other cool bands from out of town excited about coming here,” says bassist Blaine Slingerland. “It gets people from outside of town excited about your city, which really helps your own scene grow.”

Doom metal trio Beira can easily lay claim to being one of the heaviest bands in San Diego, with a sound defined by its crushing low-end. And yet, they also boast a melodic immediacy that sets them apart. Their songs have an epic, progressive streak, but at their core is a rock-solid songwriting sensibility.

San Diego isn’t typically known for doom, which makes Beira stand out among their peers, though vocalist/guitarist Ruby Haynes says that there’s a strong sense of camaraderie in town, regardless of sound or style. “The metal scene in San Diego has been very good to us,” says vocalist/guitarist Ruby Haynes. “It's thriving with lots of great bands, and many of the local bands have been supportive of each other and are tight knit.”

It’s tempting to call Secret Fun Club the weirdos of the San Diego scene—but then again the scene’s been defined by weirdos for a long time. In fact, drummer Sal Gallegos is a local punk and hardcore vet, having previously played with The Locust’s Justin Pearson and Cold Cave’s Wes Eisold in Some Girls. Secret Fun Club is a murkier hybrid of sludge metal and math-rock, with a crushing, Melvins-style roar put through any number of time signatures and reconfigured into peculiar shapes.

That eclectic, unconventional approach is what the band says most strongly defines the city’s musical character. “I think the San Diego metal and heavy music scene is more a bunch of smaller scenes as opposed to one cohesive scene,” says Gallegos. “I think we fit in as well as we don’t fit in. By that I mean we grew up listening to metal and going to metal and hardcore shows so we are familiar with a lot of the people and ethics and aesthetics. As far as how we fit in or don’t fit in musically… that’s a whole other thing.”

Bassist John Rieder adds, “We tend to fit in aesthetically within a continuum of more experimental, though still loud San Diego projects like the incredible Author & Punisher, Monochromacy, The Locust, and even long-lost bands like Last of the Juanitas.”

A relatively new band in San Diego, OhCult (pronounced “occult”) have hit the ground running with an explosive hybrid of hardcore, powerviolence and thrash. There’s a white-hot intensity at the core of each of their furious two-minute tracks, though what drives them even more than a pursuit of technical complexity and utter mayhem is putting a mirror up to the social ills that define these dystopian times—something that they say is a common thread among San Diego bands.

“It’s easy to see why the punk and metal scene in San Diego is thriving in a city where the average 1 bedroom apartment is $1,800 a month and minimum wage is $12 an hour,” says guitarist Nas Konja. “We live in a crazy time in our country, riddled with poverty, racism, misogyny and bigotry that serve to isolate and divide us and every band you hear in San Diego has something to say about that, a message of change and unity. We are happy to be a part of this community filled with so many talented artists who support each other in standing up against these terrible things we have accepted as the standard in our society for far too long."

Though there’s no one defining local metal “sound,” San Diego’s produced an impressive amount of strong death metal bands, many of whom lean toward a more technical approach. The members of Defixion can play the hell out of their instruments—there’s no question about that. But their brand of death metal is steeped in mysticism and esoterica. Their faces are often shrouded, and they invoke rituals and incantations in their lyrics and aesthetics. It’s a heady witches’ brew, albeit one delivered in the form of blisteringly intense death metal.

“We’re absolutely a part of the metal community, but want to create an entity that combines music and a concept that surrounds maledictions, bygone cults and rituals,” says guitarist Ousiri. “It’s something we can investigate that our neighbors probably aren’t doing. But San Diego is definitely awakening. People are taking it more seriously now. The scene is getting much stronger in terms of the sound and presentation of the bands.”

Formed in 2011 and having evolved into a furious death metal machine, Gravespell’s badass bonafides aren’t to be questioned. But where so much of contemporary metal is about trying to out-extreme each other, this band focuses more intently on infusing their hybrid of Gothenburg-style death metal and blackened melodies with memorable hooks. Their rhythms are relentless, their riffs razor sharp. But beneath it all is the kind of songwriting that separates the lo-fi demos from the major festival headliners.

“San Diego is one of those places where people often say, ‘I can’t wait to get out of here.’ But then you go to a lot of other places and realize how good we have it,” says vocalist Garrett Davis. “You’ll often see a lot of diversity on one bill. The scene is pretty underrated. San Diego has a little bit of everything.”