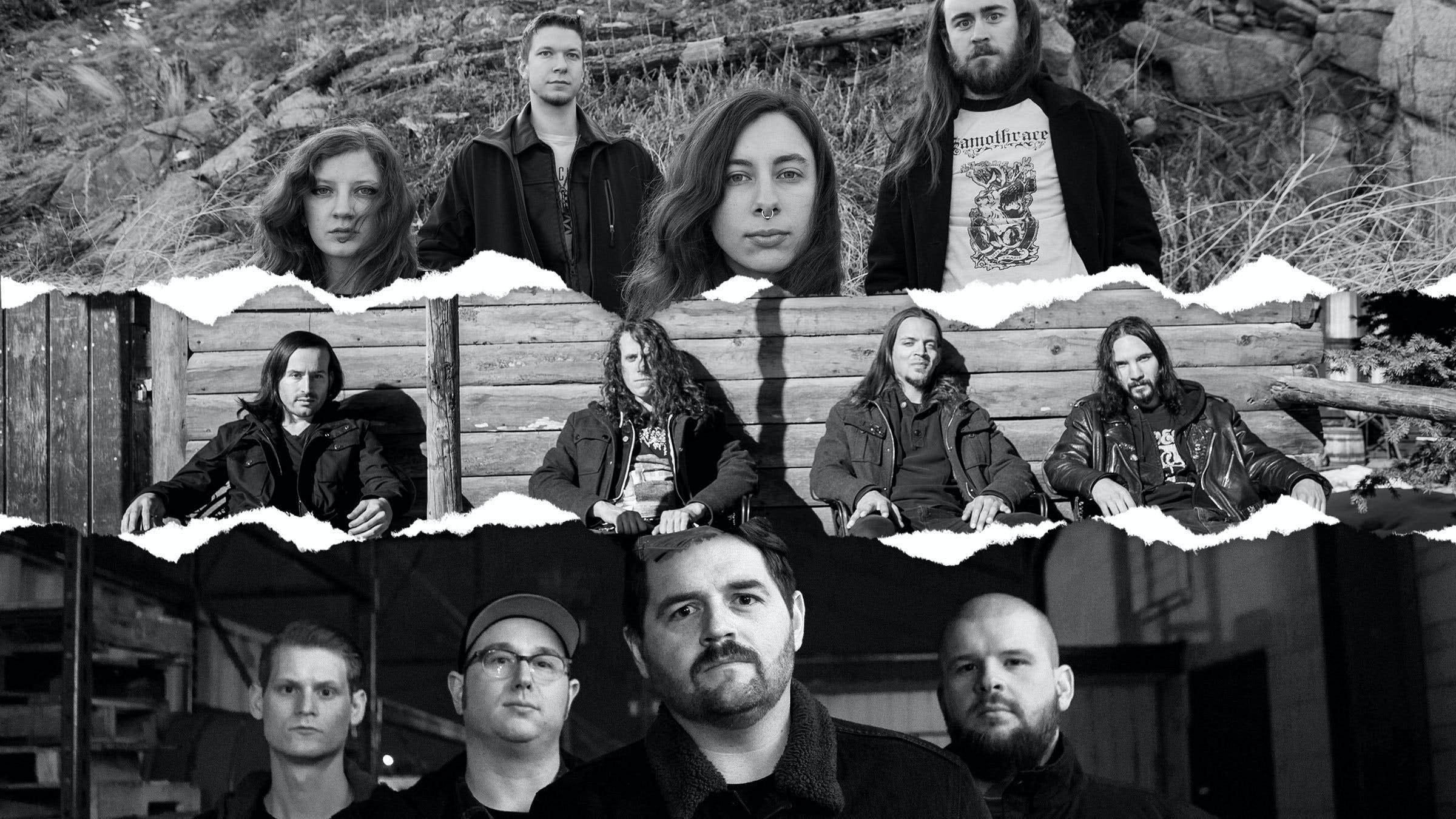 The Rocky Mountain Region of the United States has long been overlooked as a mecca for metal. However, the area, primarily the "Mile-High City" of Denver, is teeming with heavy music: Especially in the last few years since cannabis became legal in Colorado, it has not only become a destination for young people, but also a place where creativity is flourishing, and the whole region has become a veritable hotbed of all things loud and heavy. Outside of the boom of bands, there are also festivals like Fire in the Mountains and Monolith on the Mesa, which have taken the format of a big weekend of music and added camping and outdoor experiences into the mix as part of the appeal of seeing live, heavy music.

Metalheads everywhere are familiar with Denver mainstays Cephalic Carnage, Primitive Man, and Khemmis, who helped paint a picture of Colorado’s scene for our States Of Metal series, and there are of course countless incredible bands from the mile-high city, here are nine you should check out today.

Dreadnought is a sonic threat unlike any other metal band, mixing elements of prog, doom, and black metal and calling upon an entire symphony of sounds including flute, keyboard, and lilting vocals to get their message across. And while they may be a bit different, they are still very indicative of the local sound.

“As a progressive band, we’ve always struggled to fit in,” said Kevin Handlon, who plays bass, mandoline, and baritone guitar. “Even other progressive bands are often artsier or more technically complex. However, the doom and other metal scenes here in Denver have been very accepting of us for what we are and what we aren’t, and much of the same can be said for the scenes of the greater Southwest. We find ourselves on bills with bands much more extreme than we are, but that, more often than not, includes friends. Because of that, we expect to generally fit, and for that, we’re immensely grateful.”

IN THE COMPANY OF SERPENTS

In the Company of Serpents is a wildly heavy band from Denver who play on the fringes of doom and sludge and epic, dustry, desolate spaghetti-western scores. Ultimately, the band sums it up by saying they “traffic in sonic catharsis.”

“I've always loved the guitar parts that Ennio Morricone would work into his scores, and there's definitely an element of that in my writing,” vocalist and guitarist Grant Netzorg said regarding the band’s sound. “Crucible, a tune off our last record, has a riff in it that's fairly emblematic of that sound, and it's a riff that occurred to me in a dream. I woke up with the melody and lyrics in my head and had to run over and find a guitar so I could record quickly before it escaped me.”

The dudes in The Munsens do it all: Not only are they in a celebrated Denver doom band, two members of the band also make up Dust Presents, the local organization that puts on Electric Funeral Fest every summer in Denver. Their sound is raw, doom-y, and unapologetic.

“There's definitely no shortage of great bands in these regions,” said Shaun Goodwin, guitarist and vocalist of The Munsens. “I enjoy bringing together bands from all over to play in a city that is filled with fans of heavy music. Although we are far from most other music hubs, we are very centrally located, and it's a popular tour destination for bands traveling coast to coast. I think everyone loves a good excuse to come to Denver.”

OF FEATHER AND BONE

Of Feather and Bone play a take on hardcore, grind, metal, crust, that fuses with brutal death metal. In addition to their unique and ultra-heavy sound, they’re also known for their esoteric lyrics about their indigenous heritage.

“Digging into my ancestral past for inspiration has been a platform to help drive the message of death,” says vocalist and bassist Alvino Salcedo, who is also widely respected in Denver as a photographer. “The expression of death through ritual, mysticism, and folklore is the overall message, alongside the message of anti christianity. To be of indigenous ancestry is to also accept that colonization has affected countless cultures throughout history. Christian conquest has eradicated not only my ancestors but also people on every inhabited continent on the globe. To speak of heritage is to speak on behalf of my ancestors who were wiped out by a disease of prayers and documents. To connect our band to that for this region, I feel, is arbitrary, and is solely our contribution alongside bands throughout history of our disdain for Christianity in many forms.”

Abrams have it all: noisy, sludgy riffs, mathy time signatures, and big, arena-rock choruses. They say one time someone described them as “Foo Fighters meets Red Fang,” which felt strangely accurate.

“There's a big influence of death metal, hardcore, and stoner/doom metal in Denver,” says guitarist/vocalist Zach Amster. “So as we began, we felt comfortable growing through those influences, but we could never really call ourselves any of that. We drifted further away from those genres as our records came out, though we still really dig all that stuff. We've always just enjoyed playing around the outside edges of those sounds.”

CALL OF THE VOID

Call Of The Void play in a metallic punk style the fuses blackened sludge grooves with their own brand of ultra rage-filled anthems. “What if Cannibal Corpse was a punk band and played Neurosis riffs?” asks guitarist/vocalist Patrick Alberts, only half joking.

“Right now Denver is filled with amazing talent,” Patrick says. “It hasn't always been that way...Most touring acts wanted to avoid playing in Denver, because not much was going on here. That is the opposite now. It’s weird having a city filled with lots of potential headliners. It will keep you on your toes knowing the level of competition within a 10-mile radius. The scene as a whole is very positive. It's not uncommon to look out in the crowd at a show and it’s filled with every band member of every great band in Denver.”

“I've been mulling over whether or not Denver as a whole has a sound,” he muses. “For fans of of every genre mixed together. The Denver sound. Maybe weed.”

Muscle Beach are a raw, intense post-hardcore band in the vein of Refused and the heaviest parts of Fugazi. “People have described us as spazzy post-hardcore,” says Muscle Beach bassist Derek Arrieta. “We like putting frantic, chaotic structures together but we also like to lock into simple grooves that you can bang your head to.”

“It's a pretty diverse scene in Denver where everyone's pretty inclusive,” he explains. “There's a lot of bills that are straight-forward with all hardcore bands, metal bands, noise or darkwave, etc., but there's also a lot of mixed bills that sound so weird when you read all the artists on it, like an industrial hip-hop group playing with a rock and roll two-piece. These shows end up being the most fun, though, because all of your friends can be in the same venue at once."

Wayfarer take riff-driven black metal and play it with the mindset of the American West. “We try to capture that feel of the landscape and sort of haunted land, but without being kitsch about it,” says guitarist/vocalist Shane McCarthy.

“The way I think of it - you have your Scandinavian black metal - which has its own ‘metal sound,’ but is also informed by Nordic folk music, and themed after Nordic history and legends. We love that stuff, but we are Americans. So we have our own ‘metal sound,’ informed by those bands and tons of other things, and it too borrows from some American music -- Americana, folk in the darker vein. And the themes are based on the history, legend and landscape of where we are from. There is the actual ‘Denver sound’ itself - which consists of a unique sect of bands from the 90s and 00s making a kind of gothic country/Americana scene that is unique to Denver. Sixteen Horsepower, Wovenhand, Slim Cessna’s Auto Club, Jay Munly’s band, Tarantella - we are huge fans of this stuff and that is exactly what I refer to in talking about being influenced by the music and culture of our home. We carry the spirit of that sound into our own music, albeit from a heavier camp.”

On the local scene, he explains, “Denver’s been built up a lot in the last 6 or 7 years, where it didn’t always used to be an established metal place. But all of us have made it what it is over the years by just doing what we wanted to see I guess -- it’s an extremely supportive community where everyone kind of looks out for one another, which we are grateful for as that’s not always the case."

Guitarist/vocalist Ben Hutcherson (also of the doom band Khemmis) describes Glacial Tomb’s sound as, “If Through Silver in Blood-era Neurosis and Covenant-era Morbid Angel had a baby raised on a diet of Wolfbrigade, Woe, and Wormed, you'd have Glacial Tomb. In short: sludge-corrupted blackened death metal.”

On the Denver scene, he continues, “Denver supports artists that resist simple genre classifications in search of original, authentic sounds. Ours is a relatively small scene and mixed bills are the norm, so we have a lot of cross-genre pollination/experimentation. When we started this band, our only idea of what we wanted to sound like was ‘heavy.’ That freedom to channel whatever influences we find compelling strikes me as a uniquely Denver experience.”

Read an interview with frontman Ben Hutcherson and listen to the Denver death metallers' vicious new album before its release this Friday.