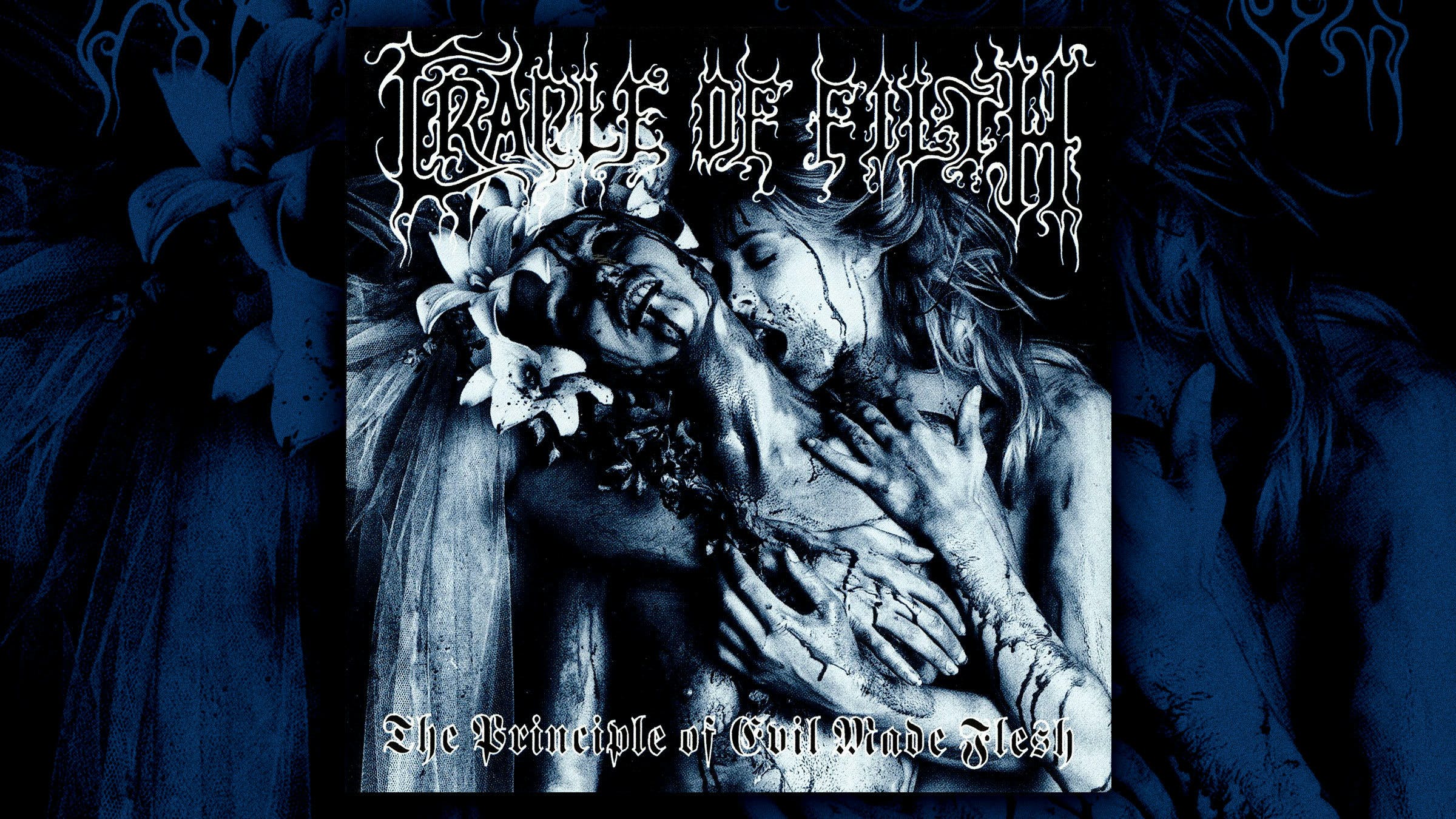 In 1994, black metal was still shrouded in mystery for your average listener of heavy music. While the year marked the release of many of the genre’s landmark albums – Emperor’s In The Nightside Eclipse, Darkthrone’s Transilvanian Hunger, and Mayhem’s sonic tombstone De Mysteriis Dom Sathanas, to name a few – the ghostly riffs, lo-fi production, and esoteric paganism of the scene left many potential listeners scratching their heads. This obviously didn’t phase the artists involved, as black metal’s central tenets had always included hostility and exclusivity, but it meant that for young metalheads looking for a way to access this lofty new genre, there were few if any points of entry.

One album helped change that – a debut by a Suffolk band named Cradle Of Filth, titled The Principle Of Evil Made Flesh. Using a mix of gothic horror, synth-driven atmosphere, and catchy, kinetic metal, Principle Of Evil unwittingly ushered in a new wave of black metal that would make the genre a vital and thriving part of the metal world at large.

The Principle Of Evil Made Flesh brought a hard-hitting sense of old-school song structure to black metal. While many second-wave black metal bands were known for their lumbering riffs and sprawling experimentation, Cradle Of Filth’s music was all about momentum. The guitar grind and drum gallop on songs like The Black Goddess Rises and Summer Dying Fast were more akin to thrash and death metal than the airy, misanthropic tracks made by the band’s Scandinavian counterparts. Dani Filth’s vocals are also significantly more monstrous and accessible than the grunts and wails that came before them. The album didn't sound as though it was made by unreachable heathens immersed in a Christian hell, it sounded like it was made metal fans who loved vampires.

That, though, might be Principle Of Evil’s more important contribution to black metal: gothic horror. While Cradle certainly weren’t the first black metal band to sing about crumbling parapets full of shadowy undead, they were the ones to do so with guiltless abandon and nerdy passion, focusing more on the satanic rites of Dracula than the real-life political bloodshed of Vlad Tepes. The cover of Principle alone, with its sapphic baptism of blood echoing Sheridan le Fanu’s classic vampire story Carmilla, adds a romantic sexuality to black metal’s bloodlust that other bands wanted to be as divorced from as possible.

Born out of this was the game-changing use of synths on Principle, which lean hard on the harpsichord and organ settings. These intros and interludes paint a vivid sonic landscape that your average fan of goth and metal could escape into, full of moonlit woods and looming castles venting clouds of bats. As such, listeners who might’ve been put off by all the humourless satanism and Tolkien worship of early second-wave black metal could revel in the delicious darkness of the genre, relating to familiar horrors like Nosferatu rather than the pagan fears of alienated teenagers (not that Cradle's vampiric horror isn't sophomoric – we are talking about the creators of the infamous 'Jesus Is A C**t' shirt – only that the band seemed very aware of that sensational side of their act).

More importantly, this use of synths to make black metal sound larger than life ushered in the genre’s popular symphonic third wave, championed later by bands like Dimmu Borgir, Carach Angren, and Chthonic. Until this point, second-wave black metal, though grandiose in scope, felt kind of small with poorly-Xeroxed covers and lousy production. But Principle Of Evil’s use of orchestral synths gave the genre the mythic sound it deserved.

The impact this had was monumental, not only on black metal as a subgenre but on metal as a whole. Cradle Of Filth’s rise to fame was meteoric; with each album after Principle, their popularity grew exponentially, until they were the official face of black metal by the turn of the millennium. Meanwhile, symphonic black metal, and on an even larger scale symphonic gothic metal, became an international phenomenon, with dozens of baroque corset-wearers entering the limelight while several of underground metal’s earliest bands experimented with more elaborate, synth-infused sounds.

27 years since it burst onto the scene and changed the face of extreme metal, The Principle Of Evil Made Flesh still sounds fresh and powerful -- not so drenched in orchestral elements that it has no edge, but not so raw that it feels inaccessible or sloppy. Today, on the anniversary of its release, we recognise the album that gave metal’s most underground genre a sense of fun, and gave regular fans of extreme metal a way into incredible music that they never would've discovered otherwise.