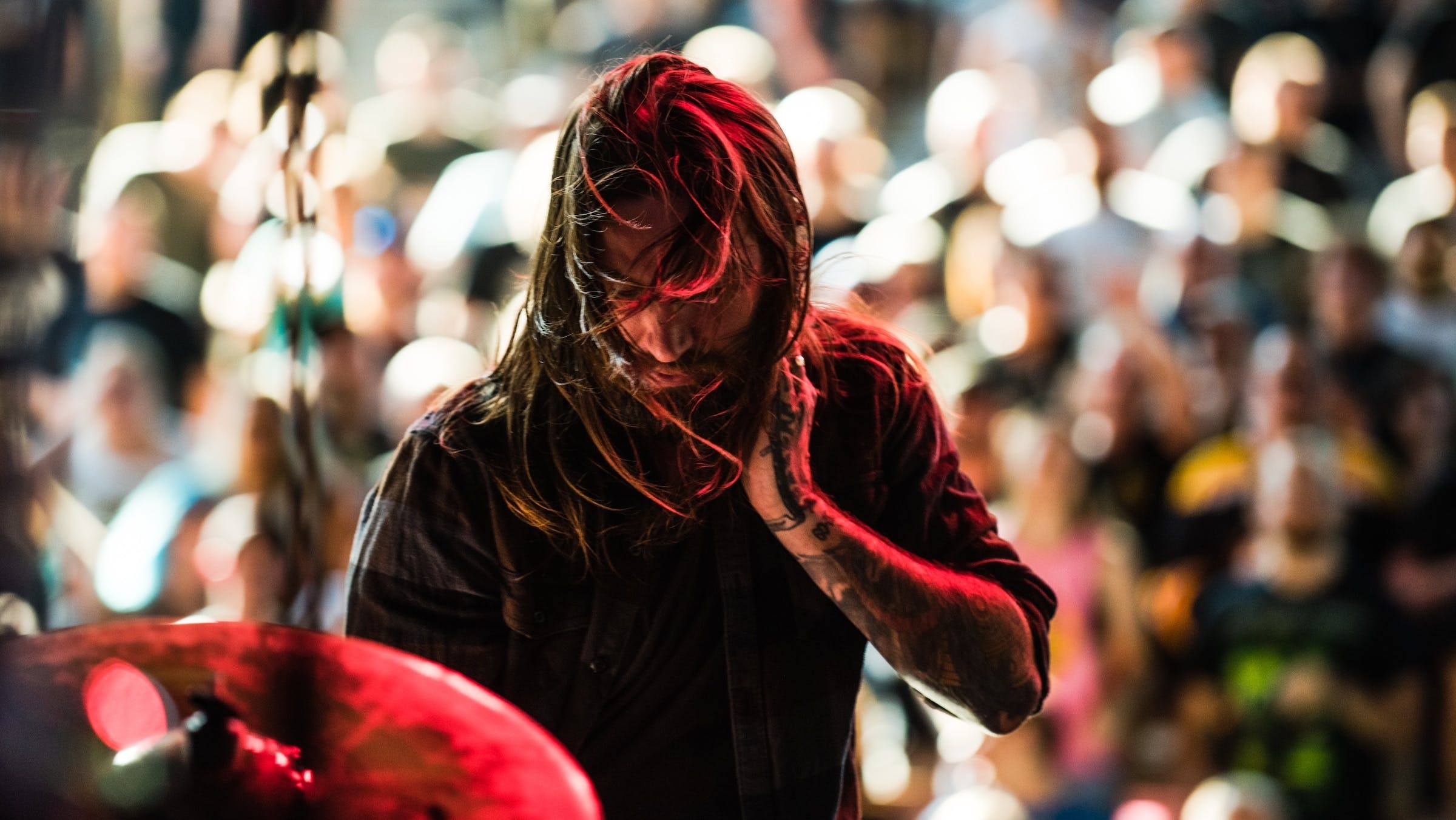 Temperatures are pushing triple digits in the Ohio Valley as hundreds of fans pack into Louisville’s outdoor Iroquois Amphitheater with backs and hair soaked with sweat to witness Every Time I Die kick off their summer tour with Mastodon and Coheed and Cambria. Despite being a fixed-seat venue, it takes mere minutes for the hoards to push to the front railing at the foot of the stage. Guitarist Andy Williams gets things started with the slow chugging of Roman Holiday before the band shifts gears to the hectic energy of Glitches. From there, all hell breaks loose, as Every Time I Die touches on nearly all eras of their catalogue. They close their 12-song set with Map Change from their latest record Low Teens, one of the most powerful songs in their storied career.

Longevity is something that every band hopes to find in their careers. For Every Time I Die, that dream has become a reality. The metalcore titans have been kicking ass ever since they came together over 20 years ago. In that time, they’ve released eight full-length records, each unique in its own way but none of them ever sacrificing ETID's signature cross pollination of existential rage and sleazy-but-thoughtful introspection. Given how much metal and hardcore have shifted in the past two decades, one wonders how the band stay ahead of the curve.

"We don’t pay attention to the curve," says frontman Keith Buckley, sitting in the band's van after their set. "It’s really nice after this long to not really feel dependent on what the Internet says about your records. Not that they talk a ton of shit about us, we just know to keep our head down and keep doing what we’re doing. As long as we’re putting out music that we love, that’s true to ourselves and not bartering with public opinion, people are going to dig it."

Over the years, you’ve seen how much metal and hardcore has been progressed. What’s your opinion on how things are changing right now?

I love it. I’ve always kind of thought that music is on a 20-year cycle, so the fact that bands that are coming around now sound like bands that influenced me when I was younger is fucking awesome. Not intentionally, but the cycle of taste is that they sound like a band that when I was getting into hardcore, I would’ve just fallen in love with. Knocked Loose is a perfect example. They would’ve gotten me into hardcore when I was 20 years younger. It starts off simple and gets more and more complicated until it collapses on itself and goes back to the basics of why you started building anything in the first place. They’re not trying to dress it up with anything fucking cool. It’s just straight up hardcore at its purest form, that needs to be heard again.

You guys have what I think of as canon Every Time I Die, then the absolute rowdiness of From Parts Unknown, then a more polished sound on Low Teens. Tell me a little bit about that trajectory for you, lyrically and musically.

With From Parts Unknown, I was definitely in a really strange spot in my life, where I found myself being positive for the first time. I didn’t know really how to write hardcore lyrics or be involved with hardcore without some sort of old grudge to bring to the surface a ton of negativity. That was always kind of the filter I looked at the world through, just like, 'We’re all fucked and everything’s pointless.' But From Parts Unknown, I had just gotten into meditation and had this sort of like -- and I know how corny this sounds, so I’m going to use it very cautiously -- but this spiritual awakening, of, ‘Maybe there’s hope for humanity and maybe there’s hope for me as a human being given all of my mistakes I might be salvageable.’ That was very hopeful.

Then, to follow it up right after that, my whole world went to shit and I almost lost everything. So on Low Teens, I can’t believe I even fucking bought into my own bullshit for one second. Like, everything is fucked. There’s no amount of positive thinking that’s going to make your world a better place. I think as far as that lyrical trajectory goes, that’s the path I was on. With Low Teens, I was so preoccupied with what was going on with my wife and kid that I just didn’t have time to even grow with them. They just pretty much handed me a record when they were done, and I had so much to say. It just overlapped perfectly.

Now that your family is safe and healthy, how do you look back at those lyrics?

I feel pretty, I hate to say, good about it. Every Time I Die was still there for me. Really, it saved my life. That’s always been a part of who I am. It came out as my favorite record, I think. It’s hard to play those songs some of the time because I remember where I was when I wrote them.

You are proudly from Buffalo, so what does your hometown still mean to you when you’re writing today?

It’s hard to really specify, other than that I equate myself so entirely to it and the attitude of the city. The city was so hopeful at one point, and then just got fucking devastated by whatever happened with the economy, the politics, and everyone being so despondent and hopeless and sinking into alcoholism. They’re given these flashes of hope with the Buffalo Bills and four Super Bowls. I know that sounds like these really trivial pieces of minutia, but these little glimpses of getting something and then having it taken back, that’s been the push and pull of this band forever. Buffalo is a beautiful city, but it fucking robs you blind. Then it’ll leave a dollar or two next to your bed, and you’re like, 'Well fuck, maybe I mean something to it after all.'

We’ve talked about the past, but I know you guys recently took some time off to start working on your new stuff. Can you give a little preview of that?

Not really, honestly. There’s just been riffs going around. This is a strange time in Every Time I Die’s history, because we used to be like a very greased-gear sort of band where the record cycle would be done and we’d get back in the studio. Andy’s been doing wrestling, and he’s going off on this second phase in his life. It’s really inspiring to watch. Dude’s 40 years old and been in a hardcore band for 20 years, and all of the sudden he finds this new life as a wrestler. Nobody wants to stop him from doing it. We’re like, 'Dude, just do what you have to fucking do because this is really fucking cool.'

So is this going to be kind of like your gap between New Junk Aesthetic and Ex Lives?

Yes, I do think it’ll be exactly like that. Like, we’re not being lazy at all. We’re still touring. It’s just so many people are into so many different new things. Jordan and I are new dads. We have these new inspirations in our lives, and I think that this band owes it to its members to sort of let them absorb this phase change and see what happens and see what music comes out of that. You can’t rush something like that.

I heard a story about your brother saving somebody’s life at a show. Do you have any wild stories?

One of the craziest stories I know of right now is that there’s a girl who says that we kicked a monitor over on her foot and that it broke her toe, and that she had to get her toe amputated. We’re currently in court disputing this.

For a lost toe?

Yeah! Because one, it never fucking happened. Two, how long are you responsible for a hurt toe? Like, even if the thing fell on her toe -- which it absolutely didn’t -- and she hurt her toe, but she didn’t clean it, she didn’t take care of it, she didn’t set it, and then it had to get amputated, like how long are we babysitting this fucking toe? I’m so pissed off when I think about that. That’s what’s currently on the top of my list.

How much do you have to pay for a toe? Is it a big toe or little toe?

I think it’s a big toe. They tried to show us pictures, and I’m like, 'I’m not fucking looking at these pictures.' It didn’t happen. It’s not my responsibility. I’m not responsible for that fucking toe. It’d be like if I broke my arm when I was in fucking seventh grade playing baseball. If my arm hurts, I’m not going to fucking call my coach and be like, 'Dude, come on, man. Help me out here.' He’s not responsible for that anymore.

Catch Every Time I Die on tour with Mastodon and Coheed and Cambria this summer on the following dates:

Following ETID’s split, Keith Buckley says he’s been working with a new band “since September”, and “the new music has never been heavier”.