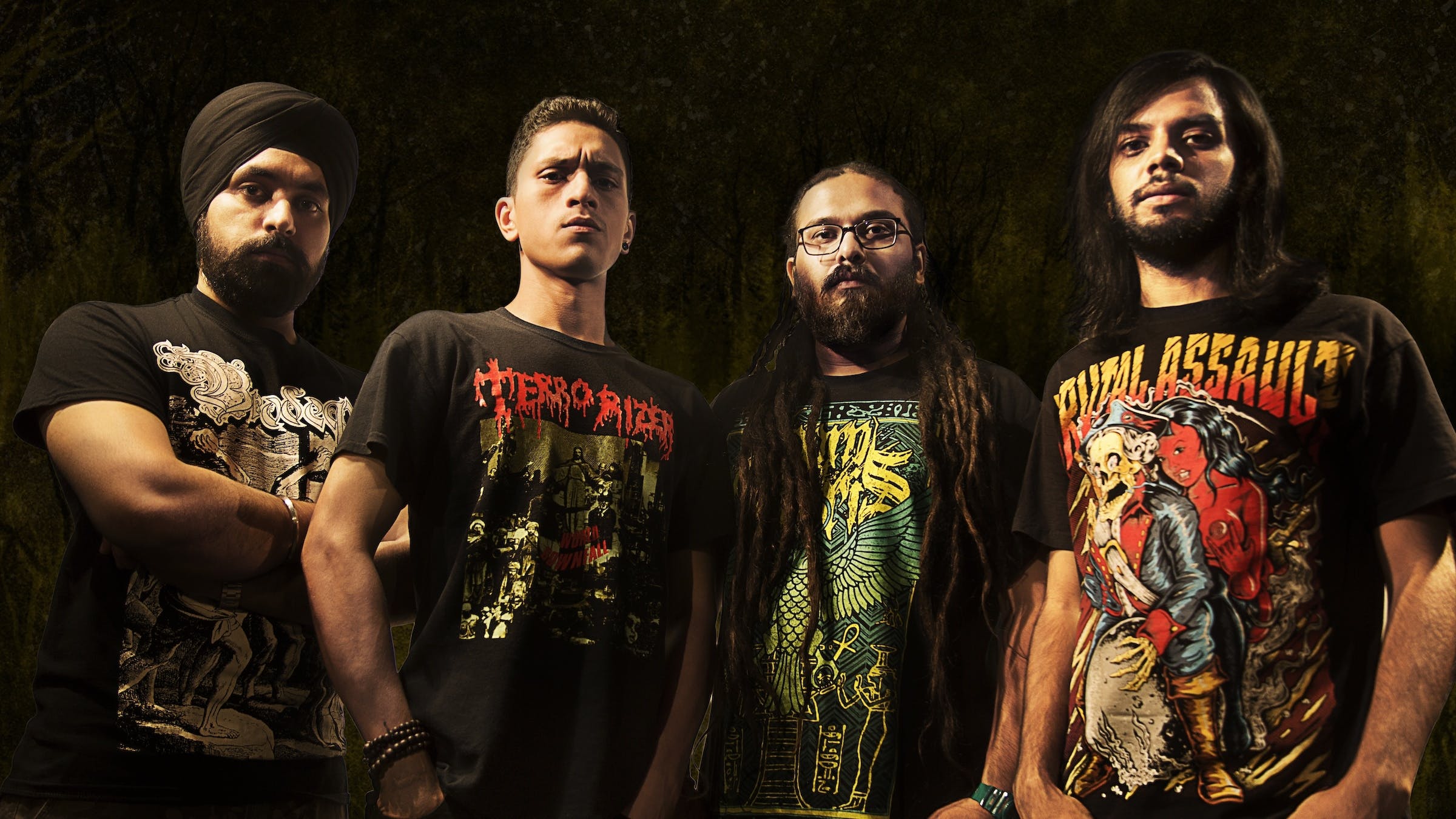 If you’re unfamiliar with India’s metal scene, you’d be hard-pressed to find a band as killer as Gutslit. The Mumbai-based quartet play driving brutal death metal with moments of off-putting dissonance and eerie darkness that’ll have fans of acts like Hate Eternal and Aborted foaming at the mouth. With 2017’s mindblowing Amputheatre, the four-piece made a massive splash in the international scene that has sent them on tour all around the world. Now, with a new album in the works and North American fans screaming for them to play in the States, it seems as though Gutslit is set to reach a new echelon of renown and brutality.

After their successful 2019 European tour, the band put together a documentary about their experience traveling around the world. Not only do they show off their live performances and experiences meeting fans from far and wide, they also address the response many metalheads, promoters, and label reps have given their music: A brutal death metal band...from India?

Before watching an exclusive clip from the film, we spoke to Gutslit about their sonic progression, Mumbai's scene, and what touring the world is like for India's most vicious band.

How have Gutslit grown as a band? How has your sound come together?

It's taken us 12 years to reach where we are, to be at the top of the Indian metal scene and play some of the best festivals in the world. We've had our set of challenges and hurdles. But overcoming them is what makes us what we are and truly defines the genre we love the most, metal. The sound/music you hear today is a gradual transformation over the years, with several influences brought in by each current and ex-member. We’ve managed to find a fine balance between grind and brutal death metal. Our second album Amputheatre is us coming into our stride and our forthcoming unreleased record is us taking all that we’ve learnt over the years and taking it to the next level.

READ THIS: Death metal bands finally have a bong line just for them

Tell me about the Mumbai metal scene -- is it supportive? Competitive? Do many bands play music as brutal as yours?

The Bombay (Mumbai) metal scene is a small and a big family at the very same time. It's made by the fans who are also musicians themselves. Four out of 10 fans at a show are either directly in a band or are into the music. This kind of helps grow it in a more matured way, and people understand all aspects of your hard-work, talent and showmanship.

It also makes them supportive, yet critical of your shortcomings and musicianship. It makes one push himself more to outperform and keep a smarter audience enthralled and active. A healthy competition plus a general support for the musicians is what we would call the Bombay (Mumbai) Metal Scene. On the other hand, they equally admire the international success that Gutslit has achieved over the years and are equally supportive of us being the torchbearers of the Indian brutal death metal scene abroad.

At least some of our readers know very little about India's death metal -- who are the local heroes? What Indian bands, in your opinion, helped establish metal in the country?

India's death metal scene is huge. It's a territory that has so much potential and talent. A lot of big names from the metal scene from USA, Europe and other countries/continents have played here and have been welcomed with a huge turnout and support.

When it comes to taking Indian metal music abroad the notable names apart from Gutslit are Skyharbor, Demonic Resurrection, Kryptos, Godless, Zygnema, Amorphia, Bloodywood and Against Evil, Plague Throat, IIIrd Sovereign, Scribe, Bhayanak Maut and a lot more. Gutslit was the first from the Indian Metal scene to ever play an international show and to this day has the biggest geographical spread over the globe in terms of touring from the Indian Metal Scene. We have a treasure trove of talent here and It’s untapped potential.

How was your run of Europe? Is there a specific city that you felt really 'got' Gutslit?

Our 2019 run of Europe was incredible. We did a mix of tour packages, which covered festivals and club shows with our tour buddies in Stillbirth, Placenta Powerfist and other local acts, and ended up with the legends, Dying Fetus.

All the shows had their own charm and crazy moments. Usually, Leipzig, Paris, Prague, and Andernach shows are the best for us. This time we had some great shows in Trutnov (Czech Republic) where we played the mighty Obscene Extreme Festival.

Essen in Germany with Dying Fetus was one of the many sold out shows and was quite incredible too.The festival, In Flammen Open Air was another great festival to play at. We had a circle pit right from the first note, which itself was a breakfast set, and people just jumped into the pit even before they had opened their eyes.

What's a European tour like for an Indian metal band? Do you encounter a lot of pushback or difficulties traveling between countries?

What's a European tour for an Indian band? Well, in all it's honesty, it's one of the best feelings ever. The people in Europe have been super supportive, responsive and friendly towards us, especially and we have had some great bonding with our fan base there. It's more like an extended family we feel we see in them. Gutslit has been very precise in understanding what works and what doesn't and we have thus always worked on things which can help us sustain in the long run. It is straight-up DIY. We and the rest of the bands have made our own paths in figuring how this industry works with a good amount of success.

We don't sacrifice on the musical and visual content when it comes to an album and when we take this on the road, we understand the value of merch and go above and beyond to give quality products to our fans which in turn helps us have a profitable tour. All these small little things add up to a lot and helps us financially be able to sustain a full fledged tour in Europe.

Logistically, even though we have such good talent here, it becomes hella expensive to fly a band down to Europe or the States. Also, we have to deal with Visa problems, as we don’t have the luxury of a Visa on arrival for almost everywhere. But it’s not impossible, and overcoming [these obstacles] is what makes you a winner, and we've had some great fortune to have friends who have even housed us on odd days between shows. All you need is someone to take a chance on you, and then it’s all on you. For that we are also very thankful to Curby from Obscene Extreme for giving us a shot five years ago and pretty much pushing the band into fifth gear. Also shoutout to Lukas S for being a straight up G.

What can you tell me about your new album? Have you gone into the studio yet?

The new album is relentless and we are extremely proud of the songs that have taken shape. It passed the car test and all the songs are straight up bangers. Drums and guitars have been tracked and we are currently in the studio working on the bass and vocals. And we’ve roped in a death metal legend to bring this album to life.

This is the last album with our shred king Prateek Rajagopal who has moved on to take his music into new and exciting directions. The album is set for a 2020 release.

Watch our exclusive premiere of the trailer for Gutslit's European tour documentary below: