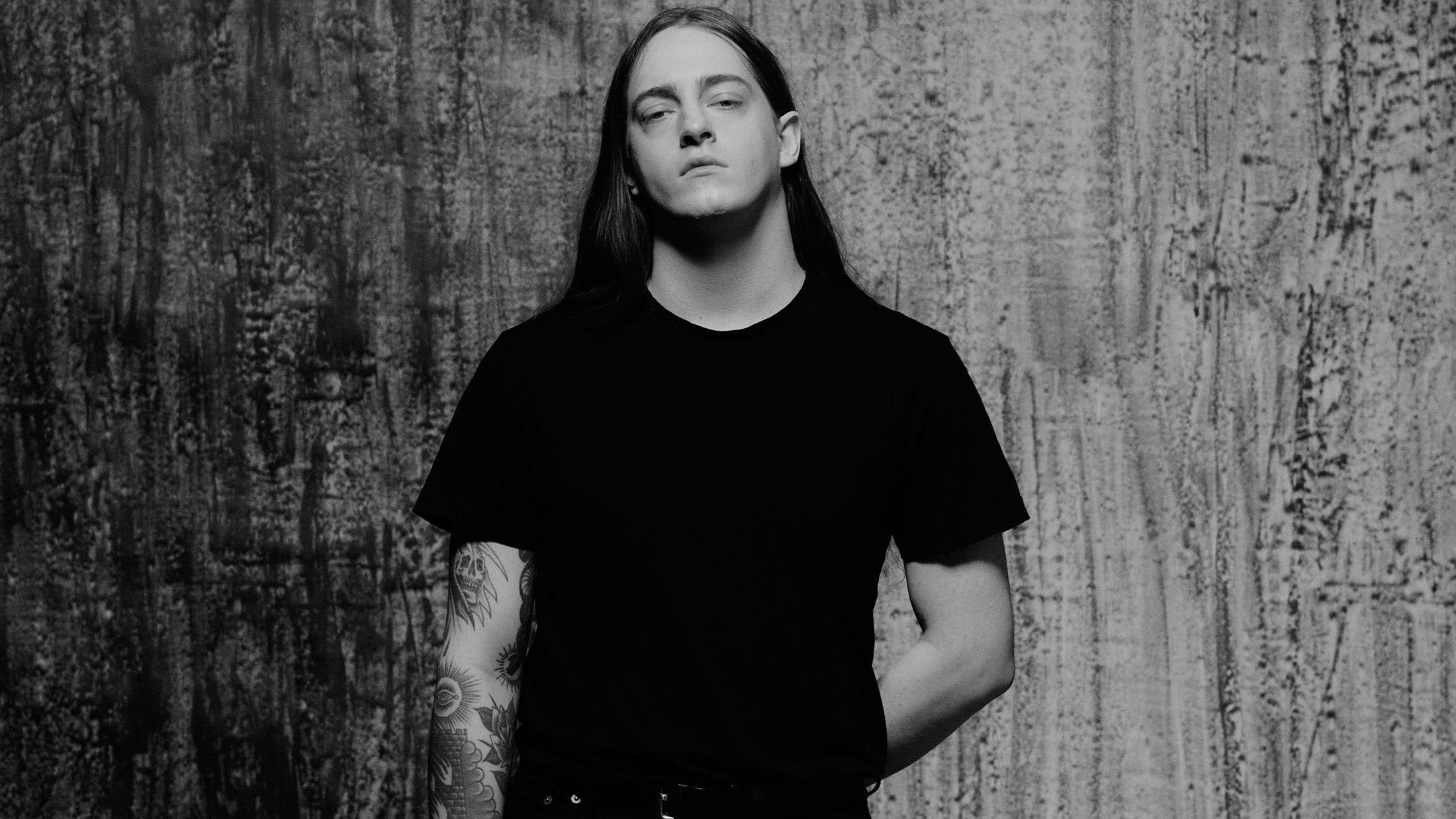 Download Festival 2017. Over on the second stage Slayer are tearing the early evening to shreds, as is (or was) their wont. On the tent-enclosed Avalanche Stage, The Dillinger Escape Plan are redefining intensity as they play their last-ever UK show. And while it's not the ideal slot for a relatively niche act to be introducing themselves, over at the Dogtooth Stage, quite a crowd of the committed and the curious have gathered. In the shadows of the stage itself sits a menacing, angular structure housing a bank of synths. Face obscured by a dark hoodie, a single figure emerges and starts to draw out huge, unearthly synth soundscapes as the lights pulse and feed the building atmosphere. Sonically, it’s a far cry from the pure metallic onslaughts occurring elsewhere, but there’s something going on aesthetically and thematically that this crowd just gets. This is the dark synthwave sound of Perturbator and it goes down an absolute storm.

“The crowd for Perturbator is basically a lot of rock and metal fans anyway, so it makes sense that I play these festivals,” muses James Kent – the man behind Perturbator – four years after that Download show. He is also now a veteran of major Euro rock and metal fests including the likes of Hellfest, Roadburn and Rock Am Ring and, he says, has never once had to dodge a bottle of piss thrown in anger.

“The crowd is usually super-responsive,” he smiles. “Surprisingly so at first I thought, but then I started getting used to it and they got used to me as well. I did play an electronic music festival where I could really tell – I mean, they don't throw bottles of piss – but I could just tell the audience was not into it at all. For some reason it just doesn’t vibe well with electronic music fans. Maybe it's because of the imagery or the structures, or maybe the narrative behind the music. I'm not too sure but it's more for metalheads, the music I make.”

James himself was exposed to a lot of different music styles growing up in Paris, France. It was probably inevitable that he would develop somewhat eclectic tastes when you consider both his parents were music journalists – his dad is influential former NME journo Nick Kent, who played in an early incarnation of the Sex Pistols – and that they also played together in a trance band. They had, James previously revealed, exposed him to Pantera by the age of three, while the household rolled to a soundtrack heavy on ‘70s rock and ’80s new wave bands like Depeche Mode and Tears For Fears.

Synths were never far away and the first instrument he learned to play was ‘a huge Korg’, but it was metal that really got its claws into a young James – and the heavier the better. “I listened to Slayer’s Reign In Blood when I was very young and I was blown away,” he recalls. “From thereon out I never once got out. I started trying to find other bands and went from thrash metal to death metal and then black metal. And with black metal it was just a natural progression for me, because I was looking for more and more atmospheric music and music that was very introspective. Black metal to me, that is what it is.”

James became active in the local black metal scene, playing “a couple of live shows in nasty bars” as a guitarist, but soon became disillusioned. “I was around 18 years old and basically I was tired of playing in bands and having to compromise. So I decided to make a solo project,” he says. He took his first cues from soundtrack composers such as John Carpenter (Halloween), Vangelis (Blade Runner) and Italian band Goblin, most noted for their collaborations with horror legend Dario Argento. “It came from a desire to make John Carpenter-ish soundtracks to movies that don't exist,” he nods.

Indeed, where much of the emergent synthwave scene that he found himself a part of was filled with cheerfully neon-streaked ‘80s nostalgia, Perturbator had a darker vision from the outset. Self-released 2012 album Terror 404 obsessed on scream queen Linnea Quigley (Graduation Day, The Return Of The Living Dead) while I Am The Night trod the violent streets of a cyberpunk dystopia. Add EPs with titles like Night Driving Avenger and The 80s Slasher and you have a back catalogue that plays like the horror and sci-fi walls of your local ‘80s off-licence-cum-video store (ask your grandad).

It might seem quite the leap to get from black metal guitars to even the deepest and darkest of synthwave, but a lot of black metal musos have incorporated or moved on to different styles, from prog to ambient and even jazz. For James the transition to synth was not an unnatural one, with the main link being that sense of atmosphere. “To me that's the link between black metal and synth music. It's just the fact that synthesisers are very atmospheric instruments,” he says. “They sound very alien and layers of synths can sound very introspective. And you can definitely hear that in black metal too, it's very intimate music. And yeah, a lot of black metal artists have synth projects. Like Fenriz has Neptune Towers and there's a lot of dungeon synth music made by black metal bands.”

Perturbator’s own music has evolved considerably over the lifespan of the project. 2017’s New Model EP saw the introduction of harsher textures and more sinister sounds, with more than a hint of industrial menace alongside the sweeping synths. Brand new album Lustful Sacraments takes things even further, bringing in gothic whispers and guitar-driven elements of post-punk. It doesn’t erase Perturbator’s past but it does transcend it, transforming into something far less easily definable in the process.

“Every time somebody asks me, I cannot properly tell them what style of music it is,” James shrugs. “Which I see as a good thing, because it makes it a bit more special and unique. I think I've already started to emancipate myself from what people call synthwave since my last album. For me it's just a logical step further into transforming Perturbator into more of a project that is like a mix, a blend of a lot of my influences and a lot of the things I love. Rather than just this ‘80s love letter thing that it used to be.”

Lyrically too, Lustful Sacraments has changed without shedding any of its darkness. “It's a very nihilistic album and it's an album that deals with themes like addiction, self-destruction, all the bad habits that we have,” its creator explains. “Drinking a lot, drugs for some of us and all those vices. What's important for me though, it's not an album that's supposed to give you a moral lesson. It was mostly a look into my own self and how I deal with those themes and that strife. So there's no message behind it, there's no moral lesson except for maybe one the listener finds for themselves. It was for me to make some distance from myself and just look at it from a remove. Although maybe some people can relate to that.”

So it’s more grounded in realism and less in sci-fi this time out?

“Absolutely, yeah. It still has a lot of religious undertones and some sort of a fantasy side to it, but it's really not as prominent as it was on my previous albums. It's really not about Crazy Sci-Fi World or artificial intelligence and stuff like this. It's more of a human psychology-based thing.”

As well as the new album, Perturbator has a European tour lined up, which will also see some changes with a live drummer now firmly ensconced and James himself hauling out his guitar for some tracks. The whole set-up promises a denser and even darker experience and is due to hit the UK in November – if it goes ahead at all of course.

“Right now France is still pretty late on the vaccine stuff and we've just barely started to remove the lockdown. It still feels like we're not out of the woods yet so it's hard to tell,” James says with all the pessimism you might expect from his music. “Oh, I’m always very pessimistic,” he adds with a laugh when we point this out.

So are we heading for the sort of dystopia you’ve been dealing with on your albums for years?

“Aren’t we already there? I thought things would always go worse and worse as the years go by. The pandemic doesn't help obviously, but it's a lack of empathy and a lack of meaningful connections between people and much more vicious and manipulative governments.”

Hey, we might be going to hell in a handcart, but at least in Perturbator we have the perfect soundtrack for the descent.

Lustful Sacraments is out now via Blood Music.

Listen to Perturbator's new single, Dethroned Under A Funeral Haze

The next single from Perturbator's upcoming album Lustful Sacraments has arrived…

Watch the new video for Death Of The Soul, the "nihilistic" lead single from Perturbator's upcoming fifth album Lustful Sacraments.