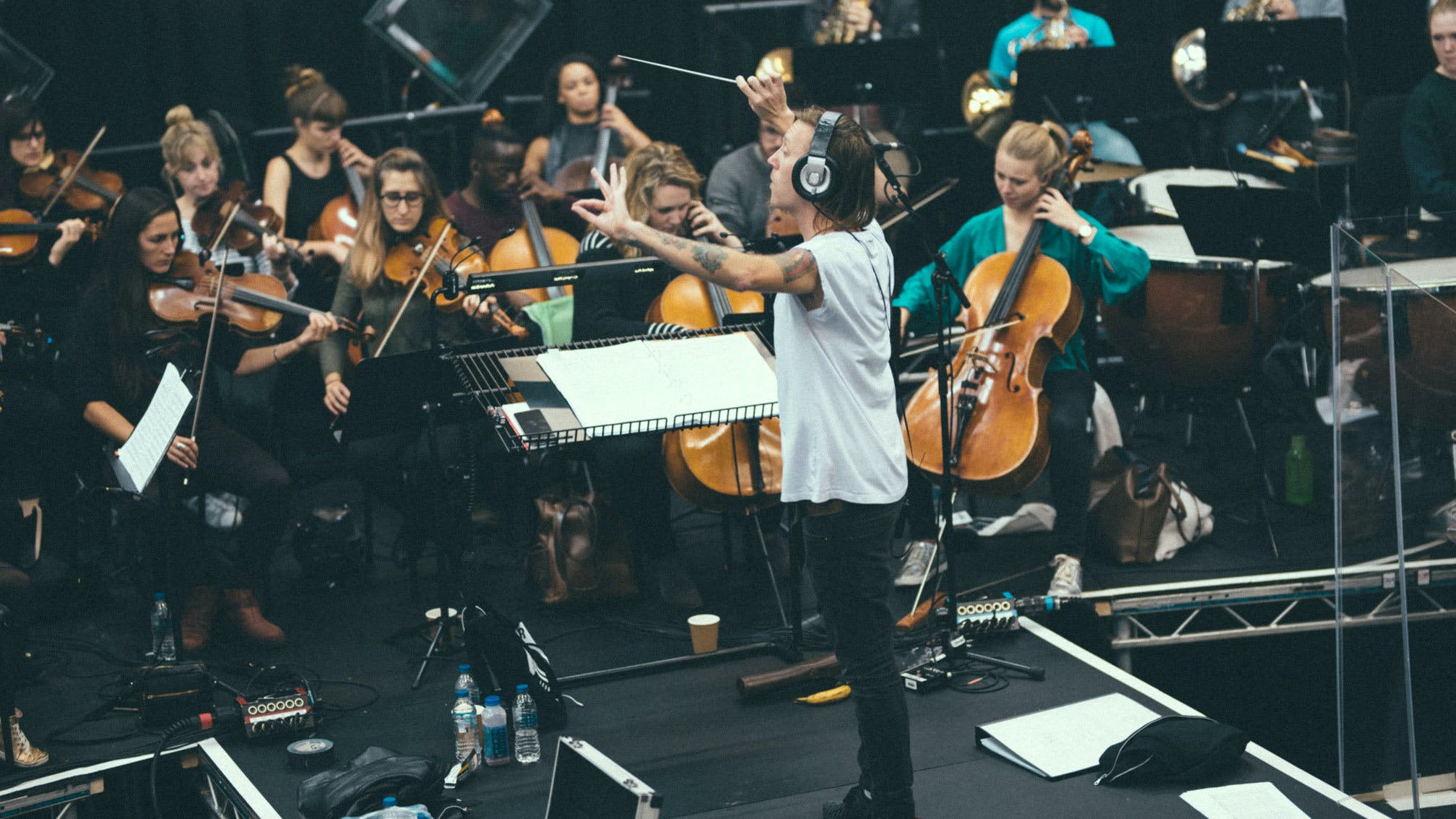 After parting ways with his band Dry The River in 2014, violinist Will Harvey considered leaving music altogether. Then, he played some sessions at Middle Farm Studios – whose owner, Peter Miles, he knew from the local scene in Newbury, the town he grew up in. “It was just so much fun. And I thought, ‘You know what? This is what it's all about. This is the most fun you can have being a violinist,’” Will recalls to Kerrang! today.

Doubling down on his decision to continue playing, Will then got a master’s degree in violin at Trinity Laban Conservatoire, where he met a lot of younger musicians. Soon after, opportunities to play came in from people he had known through Newbury and his band. “I discovered that I was in a unique position of having a whole load of work, and also having a whole load of amazing young players who wanted to work, too,” he continues.

And, in essence, that’s how the Parallax Orchestra – rock’s indisputable go-to group for all things orchestral – came about.

Will, along with cellist Maddie Cutter and conductor Simon Dobson (who had met through those Middle Farm recording sessions), founded the orchestra in 2015, with the aim of organising classical musicians for different collaborations. “There was this world of pop and rock and metal, and then there was a world of string players [and] classical music, and there was no bridge between them,” Maddie – who is now co-administrator for the orchestra – remembers. Through having each attended a different music school and worked on various (and varied) projects, this talented trio had a wide network of contacts, and Parallax allowed them to merge all these different areas of music.

Since then, Parallax have taken on a number of brilliant ventures. They perhaps first caught the attention of the rock world in 2016, performing with Bring Me The Horizon at their Royal Albert Hall show for Teenage Cancer Trust. Will had known Jordan Fish from the Newbury scene, and he and Maddie had played strings on 2015 album That’s The Spirit.

Parallax then returned to the Royal Albert Hall again in October 2017, playing two epic nights with arena rock titans Alter Bridge. The band’s manager, Tim Tournier, came up with the idea for them to play a show with an orchestra, and it was a match made in heaven – and it helped, of course, that they were no strangers to the iconic London venue. “It was funny, actually, because when we did Alter Bridge, we all turned up again like, ‘Ah, we seem to only play at the Albert Hall,’” Maddie chuckles. “We feel like the resident orchestra for heavy bands at the Albert Hall!”

The orchestra has also collaborated outside of the music space, including working with designer Lee Broom, and even playing a show with video game maker Bethesda Studios at Hammersmith Apollo, where they performed the music from the games Fallout, Skyrim and The Elder Scrolls.

Most of Parallax’s material, though, comes in the form of studio projects. Continuing their working relationship with BMTH they also played on the band’s 2019 LP amo, as well as lending their talents to fellow UK metal heavyweights Architects on their two most recent records, Holy Hell and For Those That Wish To Exist. In fact, the latter was another connection made through Middle Farm Studios, with Simon going on to write the string and brass arrangements on the Number One album.

Following the release of For Those That Wish To Exist and the colossal success that came with it, Architects approached Parallax with the idea to perform the record in full at London’s legendary Abbey Road Studios. Drummer Dan Searle was Parallax’s point of contact on that, while Simon handled the arrangements for the album – which, at 15 tracks long, was no small feat.

“It's really hard work mentally and emotionally, because that means that I’m listening to that album all day, every day, for three months,” Simon admits. “So that can become quite draining and quite tiring. It’s a good job that it’s a good album!”

They shot the Abbey Road stream in June last year and it premiered on December 11, with a live album of the performance arriving just recently, on March 25 (with Kerrang! calling it “a big, bold twist on an album that put a big, bold twist on Architects’ career” in our 4/5 review). And even COVID couldn’t curtail the project, despite the number of musicians involved having to be reduced.

“We can’t fuck about,” Simon states. “It has to be perfect. It has to be brilliant. And that’s a lot of pressure when you're in Abbey Road with the red light on over there. The hardest part is making sure that everything you do is as good as it can possibly be. But then, that’s our job. That’s what we want to do.”

Ultimately, deciding which projects to take on comes down to the people they’re working with and the type of work it is – particularly whether it’s interesting from a creative perspective. “It’s striking that balance between making sure everyone gets work and gets paid, but also that it’s musically fulfilling,” Maddie explains. Budget is also a consideration, since hiring such a large number of musicians can be expensive. “You’ve just recruited an army,” Will grins. “They’re going to need to be looked after…”

Having said that, Parallax doesn’t actually have a fixed size: they put together the number of musicians needed on a case-by-case basis, and try to find people who will be excited about what they’re doing. “I think that’s the most important thing and that’s why our orchestra is doing well: it’s that we mean it,” Simon affirms. “Whenever we perform with a band that are heavy, we get the right musicians to complement it so that it looks that way and feels that way. I’m rocking out on the podium. There’s nothing performative about that. I’m just having the best time in the world!”

It helps too, says Simon, that there are similarities between the two genres. “I think metal musicians and classical musicians are incredibly close in terms of their musical outlooks and, very often, their training,” he explains. “A lot of really good metallers will be very competent musicians.”

“I think rock and metal lends itself perfectly to massive orchestral arrangements because the music’s so big as it is, and to get it even bigger, what else can you do but add an orchestra?” agrees Maddie.

As for those metalheads who still don’t think the two can work together? “I can’t be arsed with the people who’ll be like, ‘Oh, you’re leaving your old sound behind and going all soft because you’ve got an orchestra,’” concludes Will. “It’s like, ‘Mate, this slaps!’”

For Those That Wish To Exist At Abbey Road is out now via Epitaph. Find out more about the Parallax Orchestra here.