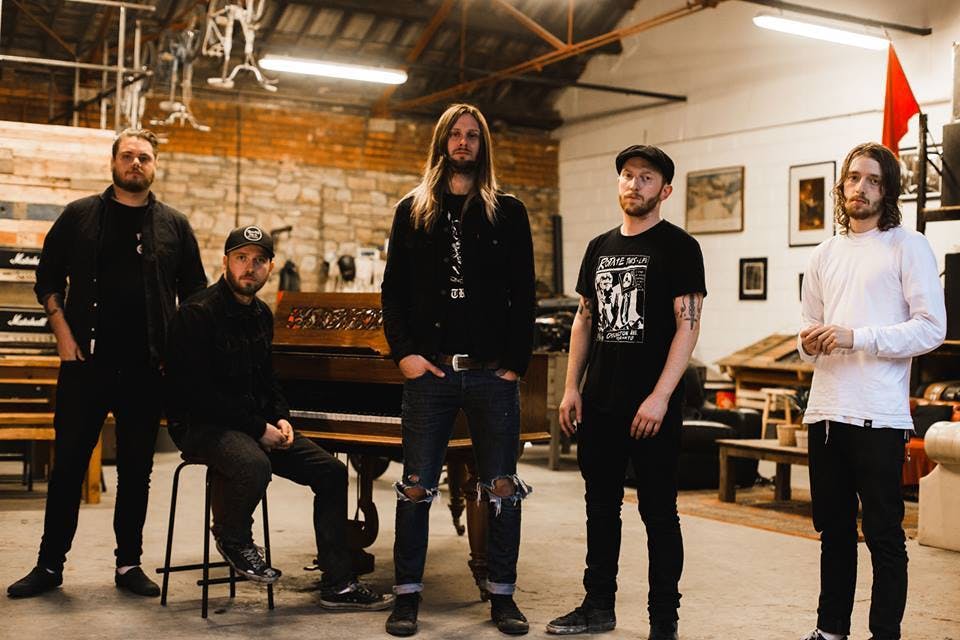 2017’s You Are We was a hugely important album for While She Sleeps. The Sheffield crew had left their label and gone entirely independent – not only funding the album through a PledgeMusic campaign, but even converting a disused industrial warehouse into their own studio/band headquarters with their own calloused hands.

They also took a slightly more experimental tack, mixing in more melody, different dynamics and a more layered approach to the vocals in particular. All this came together on Silence Speaks, which also featured their near-neighbour Oli Sykes – the Bring Me The Horizon singer’s Drop Dead building is literally just down the street from the Sleeps Brothers HQ.

Here, WSS frontman Loz Taylor tells us how Silence Speaks came together and how important it was for the band…

“What Silence Speaks – and the whole You Are We campaign – did for us was really reiterate the fact that people did give a fuck about the band. It’s really easy when you’ve got management and labels blowing smoke up your arse to get sucked into how important you are and how everybody loves you. It was daunting to strip everything back and put an album on the line to find out where your band actually is. I’d had loads of throat surgery and sometimes I feel like because of me, it’s been very up and down. Every so often there’s been a dip in our timeline because I’ve been silenced after a surgery.

READ THIS: Never Mind The Bollocks: British rock is thriving

“All that was put into it and it was quite daunting to go into a Pledge campaign. It went amazingly though, and as the campaign was rolling we were building the song. It’s so easy to get sucked into just writing songs that would just do well live, but we tried not to do that. We tried to step back and just do things that we liked; not trying to deliver what we think people were looking for out of us.

“In terms of the songwriting, Sean (Long, guitar) usually just comes to us with an awesome riff and that’s what happened in this case. He’ll sit down with the riff and start mapping it, then we all get in a room and really start working out how it’s going to go and if we like it. In general it might just be a noise rather than a riff and someone will go, ‘I’ve got a line to go with that…’ Sometimes they come really easily and sometimes it’s a bit more difficult.

“Sean also listened to a lot of '90s club stuff when he was young and so did I. We just threw everything that all the members liked into a ball. We all obviously like metal and punk but there’s so much other stuff that we try to put into our music. So those ‘Whoo-oo-ooh’ parts started off as a cool sample noise that we liked and wanted to throw in, then it developed into being a vocal thing and we took the sample out of it. On this album we just started messing around with things more and not being too uptight about what people think and whether it would alienate our fanbase or anything like that. Making the album we did find that people were supporting us; it probably gave us the confidence to step a bit more out of the box.

“Lyrically, there’s always a slight political side mixed with more of an internal feeling, and then the poetic licence to manipulate the words and give different interpretations or meanings. We always try to keep the lines open and sometimes it almost feels like a dialogue or an argument between members. I might scream something, they give a response, and it bounces and moves around the song vocally. It was quite interesting with this album and this song in particular that what could be seen through a political lens could also apply to a relationship. Brexit and all the political divisions, it is like a relationship in a way and it’s quite interesting to see how you can relate it to other things.

“Oli Sykes appeared on it as well. He’d just been really eager to hear what we’d been up to in the studio. We just sent him a couple of bits and he swung by the studio and had a nosey around. He said, ‘Do you want me in on anything?’ and we thought that would be awesome so we just sent him a chunk of music. He had a write and so did we, then we got him in to make the section. He had his ideas, like dropping the song to silence before he came in with that line (‘I think the silence speaks volumes…’). When you’re always working with the same five dudes it’s nice to get someone else in who has a different way of looking at things.

“There had been a bit of tension between the bands earlier on, but it helped signify that we were all adults and that was the end of all the nonsense. His part in the song was huge and fans of both our bands loved it. It’s a weird one because when someone like Oli gets involved, there’s a part of you wondering if the song would have been as big without that involvement. I’m sure there were people who’d never even heard us who were turned on to it because of Oli, but even before he put his part on, it was shaping up to be a big song for us.”

While She Sleeps will tour the UK and Europe with Every Time I Die and Vein next year. Get your tickets here.

While She Sleeps UK/Europe tour 2020