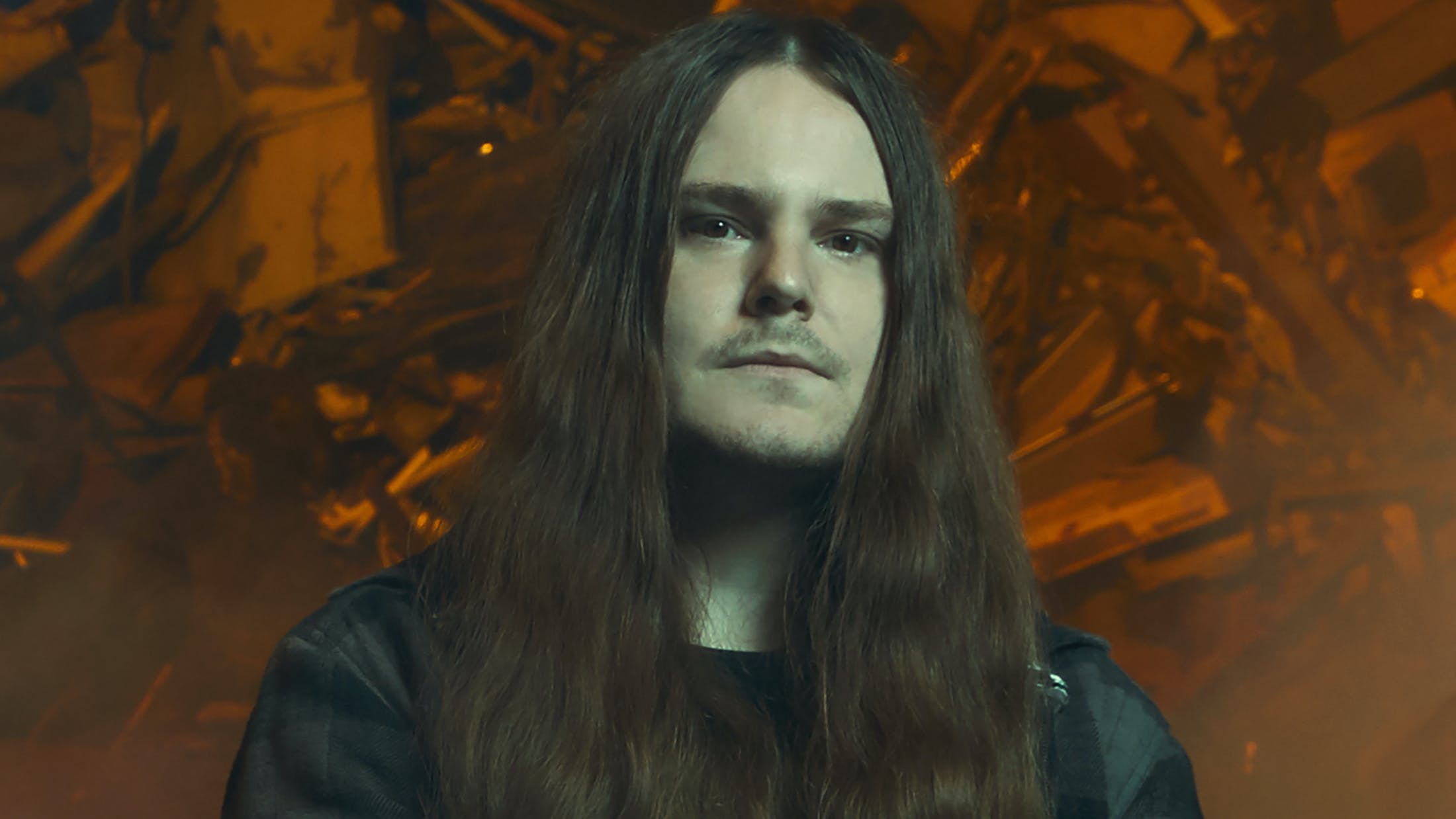 When Aaron Pauley joined California metalcore crew Of Mice & Men in 2012, he probably had no idea that he’d end up becoming the band’s frontman. But that’s exactly what happened after Austin Carlile left in 2016 due to Marfan syndrome, a genetic disorder that previously had claimed his mother’s life. And so Aaron stepped up. It’s not quite the dream he envisaged as a young child, but it’s probably better, to be honest. Speaking of honesty, though, he wasn’t entirely sure about Kerrang!’s intentions when asking him what the most illegal thing he’s ever done is. We can assure you, Aaron, that we aren’t cops. But we will get the truth out of you one day! Until then, find out why he doesn’t want to turn the internet off, when he last puked, and what happened when he met his friend’s grandmother…

When you were a kid, what did you want to be when you grew up?
"It’s funny. My mom actually asked me that every year from the time I was three years old and could talk, and then she’d write down my answers. The first answer, when I was three years old, was that I wanted to be Madonna’s drummer. I don’t know why I said that, but it’s in there, and I have no reason to believe my mom conflate my words or my story. When I was four years old, she asked me again and I responded: 'Dangerous!' So I wanted to be Madonna’s drummer and I wanted to be dangerous."

What happens when we die?
"I think that our consciousness would have to go somewhere. I think consciousness is something that scientists don’t fully understand. I think philosophers have somewhat of an understanding of it, but if you look at energy and the way that energy works in the universe, there is a finite amount of energy in all things in the universe, and I think the energy that’s firing off in your neurons and in your brain – when they stop firing, theoretically, they have to go somewhere, because energy is a finite amount. But who knows? I certainly don’t – otherwise I’d be getting paid a lot more money to be writing thinkpieces somewhere else!"

When was the last time you vomited?
"I actually wrote when in my calendar because it doesn’t happen to me that often. Is that funny? I was definitely sick, so I wrote it in my calendar – I think it was on April 2, 2019. I had just got home from tour and literally the next day I was just horrendously sick with a stomach flu or whatever it was."

What is the most illegal thing you’ve ever done?
"Why the hell would I tell you?! (laughs) Are you a cop?"

What is your party trick?
"It’s either ripping Don’t Stop Believin’ at the karaoke bar or juggling, maybe. I don’t really do too many tricks. And I don’t think I’m that kind of personality. I like to kind of just chill off to the side and get enthralled in a deep conversation with somebody when I’m drunk and just be babbling for hours. I’m not really like 'Hey everyone! Look at me!'"

What’s your biggest fear?
"I was actually thinking about this the other day. I think my biggest fear is waking up one day and feeling like I’ve outlived my usefulness, like I’ve given all I’ve got and that’s it. I’ve tapped out. As creative people, I think we’re more prone to that because I think we give a lot of ourselves, and at the same time we give a lot of ourselves to a world that’s always changing. And I think the older you get, the more intense those feelings get."

What’s your worst habit?
I would say my worst habit used to be biting my fingernails, but I oddly stopped and I don’t know why. I think my lady might have hypnotised me or something, because I have no desire to bite them anymore and I’ve been biting them for 30 years of my life. So that’s new! So now my worst habit is that I procrastinate. I put things off until the last amounted time slot. I don’t procrastinate to leaving things till past due, but I definitely know how long something will take and I wait until there is precisely that amount of time."

Do you believe in ghosts?
"Probably. I have no reason to not believe in ghosts. Am I allowed to answer that way? I don’t know if I believe in them per se – to say, ‘I believe in ghosts!’ – but I have no reason to not believe in ghosts. I’ve definitely had weird experiences, for sure. I definitely had a moment in middle school where I met my friend’s grandma that was at his house and he wasn’t there and she told me he wasn’t home, and I was like, 'Dude, I met your grandma!' because I remember seeing the picture, and he’s like, 'Yeah, she’s dead.' It was in eighth grade, and it was the most insane thing, too, because when you’re in eighth grade, you’re just at that age where you lack any credibility yet – so unless you’re one of the really brainiac, popular, smart kids, no-one’s going to believe you when you say shit like that. But I definitely had that happen once, which was pretty insane. And no-one’s ever explained it to me."

Who is the most famous person in your phonebook?
"Damn. Chester for sure. Rest in peace. Yeah, probably Chester Bennington. And I haven’t cleared it. Up until probably a year-and-a-half after Chester’s passing, I found myself occasionally being on the road or my throat would hurt or I’d just be exhausted, and I’d go to text him, just about to send it and I’d be like, 'Damn' – because then it hits you."

What’s the worst job you’ve ever had?
"Working at a shoe store. The people who shopped there were savages and would try on shoes and then just chuck them. It’s absolutely bizarre how difficult it is for people to take two things out of a box, put them on their feet, take them off their feet and put them back in the box and then put the box back. That’s asking way too much of people, and by step two they’re already like, 'Fuck it.' So there was that, coupled with the whole fact that all of the management staff were women who were older than us dudes that worked there – because the staff was mostly guys – and they sexually harassed us all. It was the most awful circumstances in the most mundane job. But it makes you who you are. I wouldn’t have such visceral anger in my heart if I hadn’t had that job!"

If your house was on fire, what one thing would you save?
"My dog. She’s a five year-old Boston Terrier named Daisy. Everything else is insured, so I’d just let it burn and get all new things, start a new life, buy a house boat somewhere!"

If you had the power to turn off the internet, would you do it?
"No. Because if I did, I couldn’t play Call Of Duty! But I think people are so dependent on the internet that you’re just begging for humanity to absolutely crumble if the internet ever goes away. That’s a sad truth, but that’s the world we live in. And the internet made the idea of a master or an expert obsolete – I think people now don’t believe in those anymore. It used to be if you wanted to learn something, you had to have a master or a teacher teach you. Now everyone’s so dumb and information isn’t retained – people who are quote-unquote intelligent just know how to look things up and get information, but nobody actually retains it and nobody’s an expert on anything anymore because it’s too expensive – it’s too expensive to go to college and become a master of something."

Of Mice & Men's latest album EARTHANDSKY is out now via Rise Records.