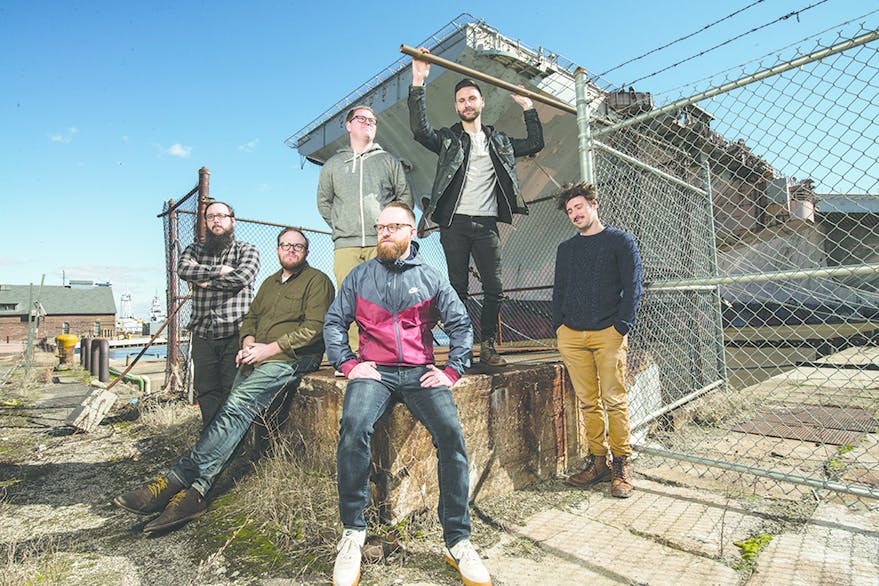 Big questions of love and life informed The Wonder Years' sixth album, Sister Cities. And in the process of making it, the Philadelphia crew steered their ship to shore…

If you’ve been paying attention to The Wonder Years’ website of late, you’ll have noticed a dark grey sweatshirt for sale, with a mysterious set of co-ordinates emblazoned on the front – 33°27’14.0”S and 70°41’27.1”W. Whack those coordinates into Google Street View and you’ll be taken you to Avenida Padre Alberto Hurtado in Santiago, Chile, a bustling city road named after a Jesuit priest and social worker, who was canonised in 2005 by Pope Benedict XVI some 53 years after his death.

It’s an unremarkable road. There, you’ll find a bus station, street vendors and stray dogs. It was here that the band found themselves kicking their heels after a show was cancelled while they made their way around South America in the summer of 2016.

“We felt useless and placeless until some fans reached out and said they wanted us to play a show,” explains singer Dan ‘Soupy’ Campbell on the phone from his home in Philadelphia. “They said, ‘We’ve got you. We’ve got a rehearsal space with a stage and a PA, we’ll give you food and we’ll have a good time.’ They came with pick-up trucks and we played to about 100 people. There were a lot of dogs in the city centre and it got me thinking about how we were in a country with no particular reason for being there, and how immediately welcomed we felt when those kids helped us out and put us up for the night. We had a lot of fun.”

That upswing in events is immortalised in the title-track of the band’s forthcoming release, Sister Cities, its name inspired by the small monuments that surround the busy bus stands and strays which populate the area, all dedicated to the Chilean city’s international links. For Dan, the simple pillars took on a greater significance while the band toured in support of their fifth album No Closer To Heaven.

That album proved challenging to the frontman, as he found himself mired down with a case of the dreaded writer’s block. He vowed that the next album would present no such problems and set himself the task of keeping a tour journal while the band travelled across the U.S., Europe, Japan, Australia and everywhere between; he kept detailed notes of the places they visited while their tour manager would document everything in photographs.

“I never want to feel that devoid of inspiration again so I pre-emptively mitigated it,” says Dan. “If I face a problem, my solution is always to work harder, be more prepared and be more organised. When it came time to write a record, I’d have this collection of photos and journals to look through and reflect on how I was feeling; what felt important and to have a record of that. When it came time to write the lyrics, I had already decided what the record was going to be about. I had lines written down. There was no writer’s block. I was so ready to write it.”

As a result, Sister Cities is fizzing with stories and ideas, all drawn from a pile of notebooks bursting with the thoughts and musings of a man living from a suitcase as his band hauled themselves and their equipment across five continents. As the presidential race reached its stomach-churning conclusion in the midst of their two-year tour cycle, it’s no accident that the exploration of “how humanity towers above all else” provides the backbone to their boldest album yet. While Trump fanatics felt emboldened by their new leader’s outrageous and often racist outbursts, Dan focused on the kindness of strangers.

“The things you do impact people and the things people do impact you,” he says. “It’s important to reach towards kindness.”

The vocalist experienced this first-hand after the passing of his grandfather while the band were in Japan and he was unable to return home in time for the funeral service. “I went to a shrine and as I was lighting a candle, weeping, an older man motioned me over and showed me how to pull on this piece of fabric that rang a bell,” he says of the circumstances which inspired the song’s opening track, Raining In Kyoto.

“He had no idea for what purpose I was at the shrine but he saw someone who needed comfort and attended to that. We’re in different countries a lot of the time and communicate without knowing the same language, but this was a moment where I was particularly vulnerable and made a connection.

Sister Cities is the sound of a band who treat the idea of stagnation like the ground is made of lava. It’s so brave and ambitious that someone should really delete the phrase pop-punk from their Wikipedia entry. It is, by and large, a big rock record with even bigger choruses. Retreading old terrain was simply not an option when they entered the studio with producer Joe Chiccarelli (Manchester Orchestra, The Shins) at Hollywood’s Sunset Sound last August.

“It was a conscious thing,” says Dan. “We never want to stagnate. It’s important for artists to grow. We don’t like it when a band releases the exact same record three times in a row. I heard that record, I want something else. At a certain point, you have to start saying that, ‘If that band isn’t giving it to me, then I’ll find another artist I love that is.’ It’s important to always be pushing back.”

You can hear it in the songs. And after writing and releasing albums for over a decade, why would The Wonder Years want to retrace their own steps? Their lives are very different to the times spent sleeping on people’s floors; Dan married his long-term girlfriend in late 2016, the preparations for which are chronicled in Flowers Where Your Face Should Be, one of the “purest love songs we’ve ever written” he notes – while guitarist Matt Brasch is preparing for his own wedding, which will take place later this year. Simply put, the band have grown up.

“I think everyone’s matured a great deal, but in the sense anyone would over a decade,” he says. “We have mortgages and families and pay our taxes on time. We’re responsible, thoughtful adults. We can spend time with our wives and our families, but it’s better for our bodies that we don’t destroy them playing 200 shows a year. They’ve found a host of things to keep them busy in the meantime. None of us are very sedentary; we like to do things.”

Indeed, it seems that the band have a collective fear of sitting still. Dan has his solo side project Aaron West And The Roaring Twenties. Matt occupies his time off with his side project Cold Climb It, carpentry and studio work. Fellow six-stringer Casey Cavaliere assists on photoshoots and works in recording studios. Keys man/guitarist Nick Steinborn has his Why Bother? project, plus mixes bands (“If you send him something you’ve done, he’ll make it sound phenomenal,” says Dan). Bass player Josh Martin co-owns a record shop, while drummer Mike Kennedy moved back to Philadelphia from Seattle, released his own EP and paints.

So what’s the glue that keeps the band together, focused and moving forward with the same enthusiasm?

“They’re my best friends,” the vocalist says. “There isn’t a day when I don’t talk to those guys. It’s basically two groups of three people in two neighbouring high schools – Casey and Josh were friends since first grade. Matt, Nick and I have known each other since we were 12, 13. Those groups collided when we were 17 and we’ve been best friends since. Casey lives 200 yards from me. Josh is a five-minute walk away. All of our girlfriends and wives are best friends.”

Dan says this friendship greases the wheels when it comes to writing music; there’s no benevolent dictator calling the shots. “It positively impacts the democratic process – everyone’s voice has value,” he explains. “That’s how we get the songs that we get. It’s the six of us coming together that makes it The Wonder Years.” Their bond extends far beyond the creative process, too, as the rigours of a decade of touring has rewarded the band with the ability to problem solve and adapt to any situation.

“That’s a huge part of adulthood; your ability to adapt, not panic and move through effectively,” reasons Dan. “We know what it feels like to have your van break down in the middle of the desert in Texas and not have anyone to help you. You have to figure it out. When something goes wrong, we have a wealth of life experience from having to problem solve when we were destitute. Trials and tribulations have taught us to be better, more effective adults, and people in general.”

Which all brings us back to Sister Cities. There’s no great drama behind the scenes, or bitter bust-ups fuelling the nitty-gritty of the record. It’s simply the result of a group of friends seeing the world, writing music and taking creative risks with their artistry. The success of last album No Closer To Heaven – which peaked at Number 12 in the U.S. Billboard 200 chart – didn’t unearth any fevered egos lurking in the background. It was business as usual for a band he’s previously described as “perpetual underdogs”.

“It felt really vindicating as we worked so hard, but nothing really changed at all,” he says. “I don’t think that feeling will ever change. I think it’s just in my personality to feel that way. We always want to take a step forward and for No Closer To Heaven, if I’m looking back critically – which is important – I don’t feel like we took one step. It felt like we took three quarters of a step. So this time it was important for us to take a full step and give you that quarter we owed you from last time. I never thought that we were capable of writing songs I love this much.”

Sister Cities is out now on Hopeless Records. You can stream it below.

Check out The Wonder Years on tour in the UK and Ireland on the following dates.