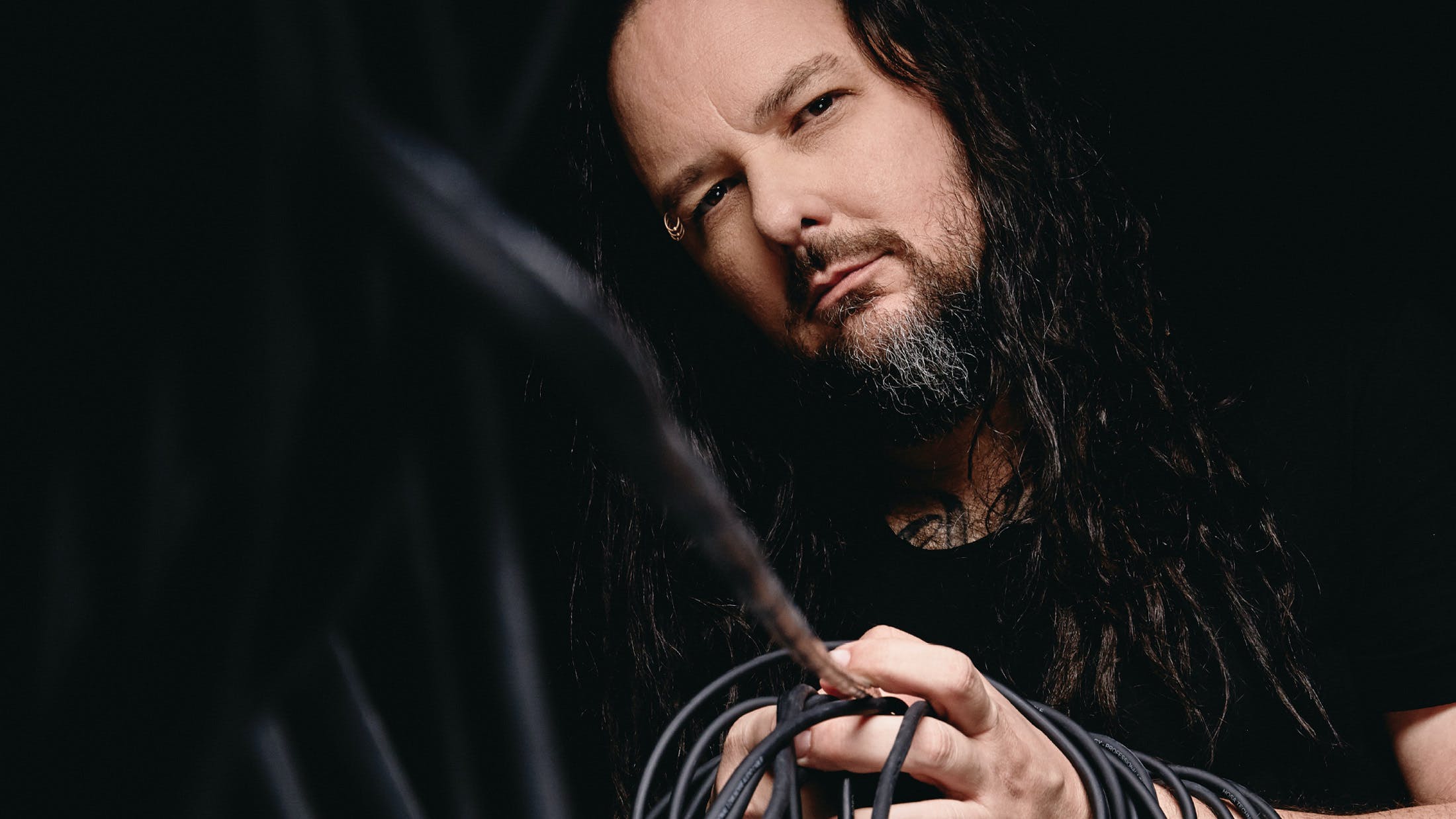 After almost 20 years at the helm of one of the greatest bands in modern metal, Korn frontman Jonathan Davis exudes a sense of arch theatricality even on a random, locked-down Wednesday evening. Speaking from his home in Bakersfield, California at 1am local time, he assures us that, “I’m up all night, like a fuckin’ vampire.” Candles flicker beneath heavy-framed religious iconography off to one side. The doorway behind him glows with inexplicable red light.

Characteristically, there is no weariness as he talks about his band’s first live performance in over a year. Taking over Stranger Things: The Drive-Into Experience in downtown LA for the Korn: Monumental “global streaming event” this Saturday, April 24, he explains, wasn’t just a chance to innovate and explore Korn’s vision in a different medium, but to let loose songs that’ve gone unplayed for too long in the grandest environment imaginable. More than that, it was an invaluable opportunity to expunge many of the bad feelings of a year caught in The Upside Down…

Korn’s last live show was on March 1, 2020 in Fresno, California. How exciting is it to get back onstage for Korn: Monumental?
“It’s gonna be fun. At that point last year, we’d just started touring on [13th album] The Nothing. We didn’t really know what was happening. We were getting ready to jump on a plane to Japan when everything went to shit. For 25 years, all I’ve known has been being in a bus going from gig to gig, so I’m excited to get back to work!”

How difficult has lockdown been?
“Its been hard for some of us, and it’s been better for others. I can totally relate to people going batshit crazy. When you’ve got an outlet and you’re told that you can’t do it anymore, that’s gonna fuck your head up. It’s not just musicians who’re gonna suffer – it’s everyone. One day you can go outside, the next day you can’t. Then you need to wear a mask. We’re told to take this vaccine, then we’re told not to. We’re being told so many different things that it’s normal to have mental health problems. We’re not made to be pinned up inside and only allowed to go out to the grocery store and to get gas. I have respiratory issues, too, so in the first part of it I thought I was gonna be a goner! It’s been tough.

“Ultimately, though, it’s been like an enforced time-out. It’s been bittersweet. It’s given me the opportunity to hang out with my family more and do some things I hadn’t been able to do before: search inside me and find myself. I just hung out with my kids and my girl, listening to music and playing video games. I cooked and did shit around my house: shit that I’ve never done. I’m a musician – I was given a gift – but that doesn’t make me different to anyone else.”

Your livestream arrives over a year into the corona-coaster, just as many bands are thinking about getting properly back on the road. Have you been planning this longer-term?
“We had been watching everything that was going on. We saw all these bands doing livestreams and different things. We wanted to take the opportunity to kick back and really take everything in, so that we could create something spectacular that pushes the envelope like Korn always does. We thought that, visually, if we were going to do a stream, we were going to do one. When we were given the opportunity to check out the Stranger Things experience, we realised it was such an amazing site. They haven’t let anyone play there before, so this was some new shit for them, too. It just ended up happening how it ended up.”

Drive-ins have never been as common in the UK and Europe. What exactly was that site like?
“A drive-in was [traditionally] just this big space where you would park your cars in front of a massive screen, stick a little speaker to your windshield and watch movies. It’s what we did back in the ’70s. They’ve torn most of the old drive-ins down around here now but, with COVID, [the format was revived] with performers putting on these shows in front of audiences who were socially-distanced in their cars.

“With Stranger Things, it starts where you drive into this parking garage. They have actors running around between the cars and all kinds of crazy stuff going on. Eventually it takes you up to the top of the building where you park in front of this stage with a huge screen that you can watch. There are views right out over downtown LA. It’s amazing.”

Are you big fans of Stranger Things?
“Honestly, I’ve still only watched one episode. Of course the band are fans, and we’ve done some cool publicity shots with a Stranger Things theme, but it was really about this amazing facility that Netflix were kind enough to let us use. I guess [with The Upside Down concept, Stranger Things does overlap with the Korn aesthetic], but this wasn’t Korn collaborating with Stranger Things. It’s just a spot for us to play a show!”

Do livestreams like this feel more like playing a concert or recording a music video?
“It needs to be more like playing a show. They can make it more like a music video, where it’s like, ’Stop! Cut!’, but you’ve got to put your foot down and say, ‘This is a live event, guys…’ To do that can take away the live energy of the whole thing. Fortunately, we’d done it before on Korn III, where we played The Encounter in the middle of a crop circle and took inspiration for that from Pink Floyd’s [legendary 1971 recording] Live At Pompeii.”

The Korn: Monumental concept promises to be a “groundbreaking, immersive” experience. That’s a big billing to live up to, especially in 2021…
“Not to spoil anything, but this shit’s amazing. We’re all very proud of it. We were there the whole way, from when they were doing test shots to filming the show. We were constantly just like, ’Wow!’ We knew that this was going to be mind-blowing. Put it this way: I’ve been playing in and watching Korn for over 25 years now, and I still sat down and watched the whole damn thing. It’s really fucking cool. You can watch it on your phone, your laptop screen or your TV, and it’ll be a great show!”

You’ve promised a one-of-a-kind setlist. What exactly can fans expect?
“When you’re playing a traditional live setting, with people there, you do tailor your setlist to get out there and go. Plus, we have 13 records to fit in, which can be a bitch. For this, there’s no fucking crowd, so it’s not about that traditional exchange of energy from band to crowd and crowd back to band. We’ve picked some songs that we’ve never played live before, but we’ve also picked plenty of the old goodies. There are a couple of deep cuts in there: songs that we haven’t played in a long-ass time. There are some new songs off the new record that we’re just getting ready to play for the first time. There’s a pre-show and all kinds of shit going on. We wanted to make it an experience. It’s just a really cool package.”

Was there a need to select songs that would energise you in the absence of the normal live audience?
“There is an element of that when there isn’t a crowd there. We’ve been in this band for 20-something years, and when we get onstage it’s normally the crowd who are pushing us. That’s the beauty of a rock show: becoming one, forgetting everything, living in the moment. But this time it’s gonna be easy because we haven’t played live in a fuckin’ year! We’re already excited! When you hear that shit for the first time again, it’s gonna do something!”

The songs from The Nothing are loaded with some serious emotional weight for you personally. How has it been to throw yourself back into that mindset after a year away?
“It felt really fuckin’ good, to be honest. Those songs are very impactful, very emotional. They pack a punch, and they’re fun to play. But that [catharsis] has been the same across all of our records. That’s where I deal with my demons: when I’m onstage. The things inside that are bugging me, the stuff that we bury way deep down? Some people go party to blow off steam. Some people do art. I deal with it onstage because that’s what worked for me, and I think I made it okay for other people in the world to do the same.”

And, looking to the road ahead, what are your looking forward to in 2021 and beyond?
“I just wanna play, man! I just want to go out and make people feel happy again. That’s it!”