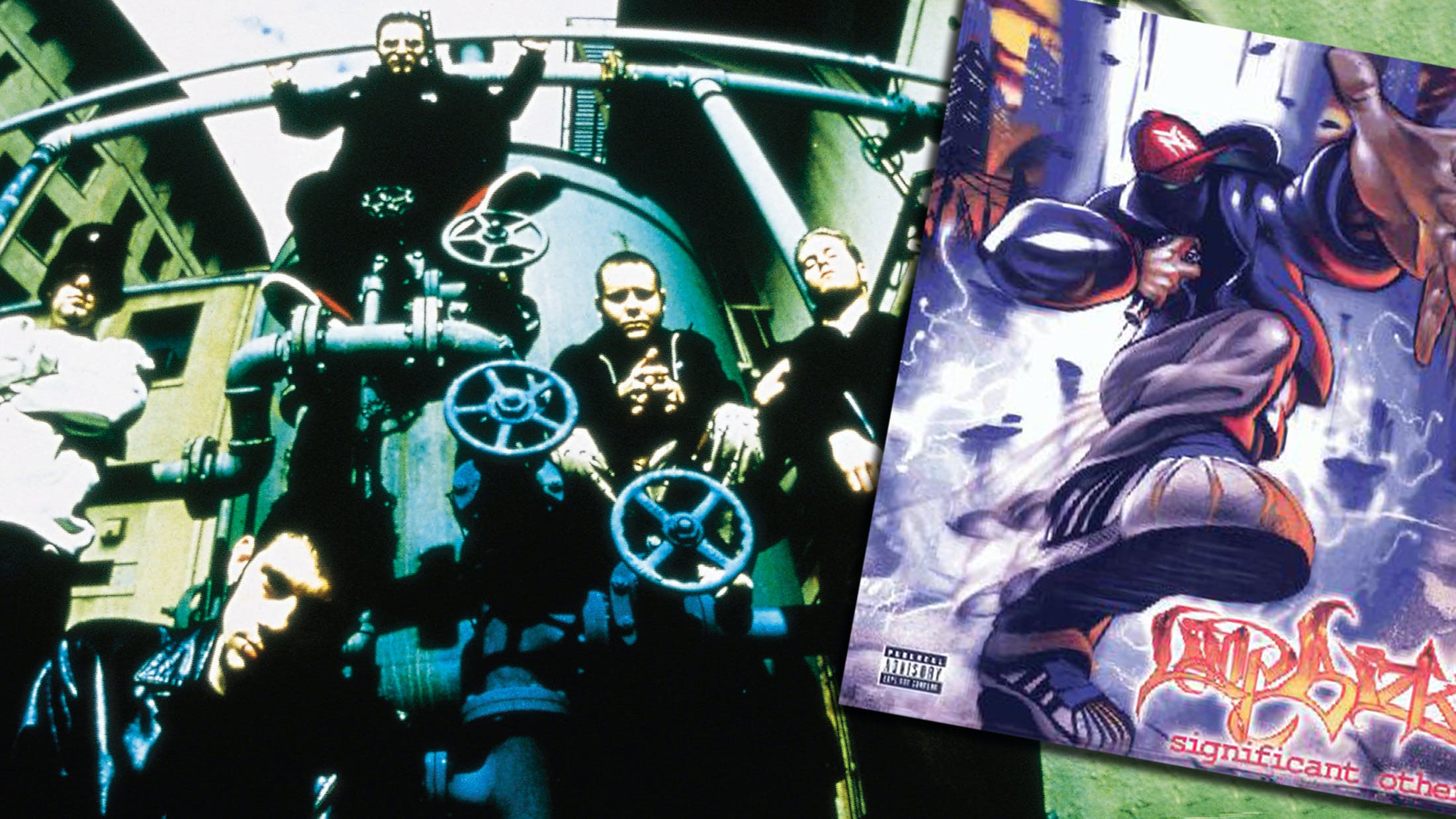 Right from its wibbly-wobbly electronic intro, Limp Bizkit’s smash-mouth second LP Significant Other pulled precisely zero punches. The derision and controversy that would plague the Jacksonville five’s subsequent stellar ascent had yet to truly hit pace, but there was a sense that they were ploughing into a chaotic future with eyes, fists and defiant middle-fingers raised to attention. When frontman Fred Durst announced ‘It’s nineteen ninety nine, BABAY!’ on the bemusingly-titled 9 Teen 90 Nine it was the sound of a gang realising their time was now.

It was, indeed, the turn of the millennium. Two years on from their 1997 debut Three Dollar Bill, Y’all$ the world was beginning to get a grasp on Limp Bizkit. Where their buddies from Bakersfield, Korn – with whom they had completed the previous year’s inaugural Family Values tour – had plotted out the sound and aesthetic of nu-metal, this was the outfit that’d define its attitude.

Tipper Gore’s infamous, iconic black-and-white ‘PARENTAL ADVISORY’ stickers had been in circulation since 1990, but finally a band was stepping up their shit to truly earn them. Where so many of their nu-metal contemporaries focused on the creative possibilities of mixing up rock riffs and hip-hop rhymes, Limp Bizkit seemed like a blend of all the things white, middle-class kids’ parents feared about those genres: obnoxiousness, brute violence, questionable sexual politics and complete disregard for civilised society.

On album two, everything would need to be escalated.

“Fuck, our first record wasn’t that good,” a then-28-year-old Fred Durst told K! at the time, “but Faith [their unit-shifting George Michael cover] really got big, so everybody’s waiting for this record to be shitty, so they can call us out as one-hit wonders…”

Engaging producer Terry Date – who’d made a heavyweight name for himself with Pantera, White Zombie and Deftones – the band were keen to sharpen their attack. Front-loaded by concussive singles Nookie and Break Stuff (songs with enough thump to put lyrics like 'I did it all for the Nookie' and 'I think you better quit, let the shit slip, or you’ll be leaving with a fat lip' into the international consciousness) it felt immediately like mission accomplished. Emotion was delivered with broad-stroke bombast: anger, petulance, isolation and horniness that captured millions of teenage mindsets.

“They [were] a band riding the crest of a musical revolution,” reckoned veteran Kerrang! scribe Paul Travers in his 3/5 review on the record’s release, “as opposed to one spearheading it.” It was a comparatively measured response compared to the majority of high-minded establishment critics struggling to rationalise this coming force, who saw only a sophomore release built on sophomoric content and completely missed the point.

The sort to drop Jackass-alike skits and their own braying laughter mid-record, such opinions were just fuel for the Limp Bizkit machine. So, were these dopey fratboys themselves, or just million-selling master manipulators who’d distilled America’s adolescent white rage into mass-marketable music? The truth lies somewhere between the extremes, and it took a delicate balance to stop the whole mess from careering off the rails.

Pulling one way, we had that red-capped frontman. Nowadays accepted as chief amongst heavy music’s eccentric uncles, it’s difficult to appreciate how legitimately out-of-place he looked swaggering onto the scene. “Meet the charismatic, motormouth, self-confessed workaholic and world-class schmoozer,” read the tellingly enthusiastic sell to one early K! profile piece. “A rap-loving outcast voted least likely to succeed by his schoolmates.” Coming across, frequently, as an unrefined, rock-ready, red-necked Eminem-clone, he was dismissed by many as a clueless Chad with no place at metal’s high table. Prone to deceptive introspection and the sort of cod-philosophy that spoke directly to his disenfranchised fanbase (“You’re alone in the world, no matter how many people you surround yourself with…”), others saw an authentic blue-eyed rebel without cause.

Born Frederick Allen Mayne III and re-christened William Frederick Durst when adopted at an early age, he seemed destined to be a contrarian, always at odds with himself. Railing against the authoritarian attitudes of his adoptive father – a cop – he was an outsider who’d found solace in alternative music. The sound and showmanship of Michael Jackson changed his life. That didn’t stop him enrolling in the Navy after high school, of course. Dropping out, “injured” a year later, Fred found himself homeless, drifting. “I was just that fuckin’ guy drama centred around…” he reflected with surprisingly self-critical candour. That wouldn’t change.

He was nothing if not resourceful, however, and it wasn’t long before he had built a band around his greatest assets: that loud mouth, the larger-than-life personality and a pouty, relatable angstiness that wouldn’t seem out of place in any high school detention hall in the western world. Fans willing to look closer, too, found mischief in his brash persona, and a sense of his own ridiculousness buried well beneath the surface but just pronounced enough to let him get away with it. Just.

“We’re a fans band,” he explained at one point, exemplifying a tendency to drop humility in pursuit of self-promotion. “With a lot of bands, you can strip away the image and the hype and you don’t have much left. But when you strip everything away with us, you’ve still got an amazing band.”

“We don’t want to get caught up in the Hollywood bullshit,” he told us in another interview, with non-existent irony. “But you really have to be in LA to do what we do…”

Thank fuck, then, for Wes Borland.

On the other side of the scales, this was a Character (capital C) from the opposite end of the nu-metal spectrum: a flamboyant freak in body paint and black contacts who just happened to be the brains behind the operation.

“People want rock stars to be drug addicts and use their penis as their only other talent,” Wes would reason of their relationship with far more clarity – and a dam sight more modesty – than his bandmate. “But we’ve never wanted to be like that. We love our job too much to abuse it. We were given the opportunity to live our dreams, and we’re going to use every second of it.”

Although credit, of course, is due to drummer John Otto, turntablist DJ Lethal and bassist Sam Rivers, it was the symbiosis between Wes and Fred that kept things ticking-over – as they would discover in the wake of the guitarist’s departure, years later. His were riffs heavyweight enough to shoulder the frontman’s more awful and outlandish lyrical absurdities. Lyrics like 'It’s time to pay the piper / Bums are the type of shit that’s in a diaper' or 'It’s my ass and your perfume that make temptation hard to refuse…' just wouldn’t fly without instrumentality that evokes the feeling of having ones face slammed into a windshield with the repetitive force of 100,000 car wrecks. Even less bombastic moments develop subsisted on Wes’ subtly insidious play. In return, he had a frontman who would expose his genius on the world stage.

Another of Fred’s talents – the uncanny ability to “network” like a motherfucker – bore fruit in an era-defining cross-section of cameos and guest appearances. Nobody Like You found Korn’s Jonathan Davis and Stone Temple Pilots’ Scott Weiland (who also acted as something of a vocal-coach for Fred during the making of the record) lend their pipes. Staind’s Aaron Lewis (close to the height of an almost-forgotten superstardom) featured on No Sex. The straight rap of N 2 Gether Now boasted DJ Premier and Wu-Tang legend Method Man – whose quality, critics have speculated, Fred never really understood.

That the record hit Number One on the U.S. Billboard 200 and rapidly accelerated worldwide recognition surprised absolutely no-one.

The band’s ability to push the envelope in terms of ostentatious behaviour and general controversy, though, was legitimately impressive. Most of that could be laid at the feet of Freddy D. The singer was arrested following an altercation where he reportedly booted a security guard in July 1999. He appeared in faux-porn parody Backstage Pass, started giving interviews to Playboy magazine, dating Baywatch bombshell Carmen Electra and bought a $1million house in Beverley Hills. He was somehow promoted to the role of a ‘vice-president’ at Interscope records. Hell, the mad bastard even swung a private screening of the new Star Wars movie at George Lucas’ Skywalker Ranch.

“I write what I feel,” he continued to plead his man-of-the-people credentials to borderline comic effect. “But I always think, ‘Would 95 per cent of people identify this?’ If not, I don’t write it.”

There was darkness, though. Valid accusations of misogyny were levelled at Nookie and the band’s testosterone-soaked public image. It was quickly shrugged off. It would be less easy to ignore the chaos that unfolded at Woodstock 1999 where that song, Break Stuff, and Fred’s unsuppressed machismo provided the backdrop for mass property destruction and numerous sexual assaults. Although oppressive heat and gouged prices had already stoked the primal, drug-fuelled gathering to breaking point, it was difficult to deny Bizkit delivered the hammer-blow that broke the festival’s back.

Not that their momentum ever looked like slowing down. Responding with the unforgettable video for Re-Arranged – in which the band are put on trial for their crimes, then drowned in a chamber full of, er, milk – their ascent continued apace towards the somewhat shark-jumping excess of Chocolate Starfish & The Hotdog Flavored Water, which would drop less than two years later. Until then, they lived like heavy music’s unlikely kings – with success measured in the reported 16 million sales the album managed worldwide, but more enduringly in unmeasurable levels of (bad) influence on a whole generation of teens.

“We’re coming into people’s lives at that point where music really affects you,” Fred reckoned at the time. “We’re one of those bands, man, like those bands [like Michael Jackson and Nirvana] were to me. It’s fucking unbelievable! I’m setting the tone for someone’s life right now.”

Deny it as many might, two decades down the line, those bone-headed kids know that without Limp Bizkit, life wouldn’t quite have been the same…