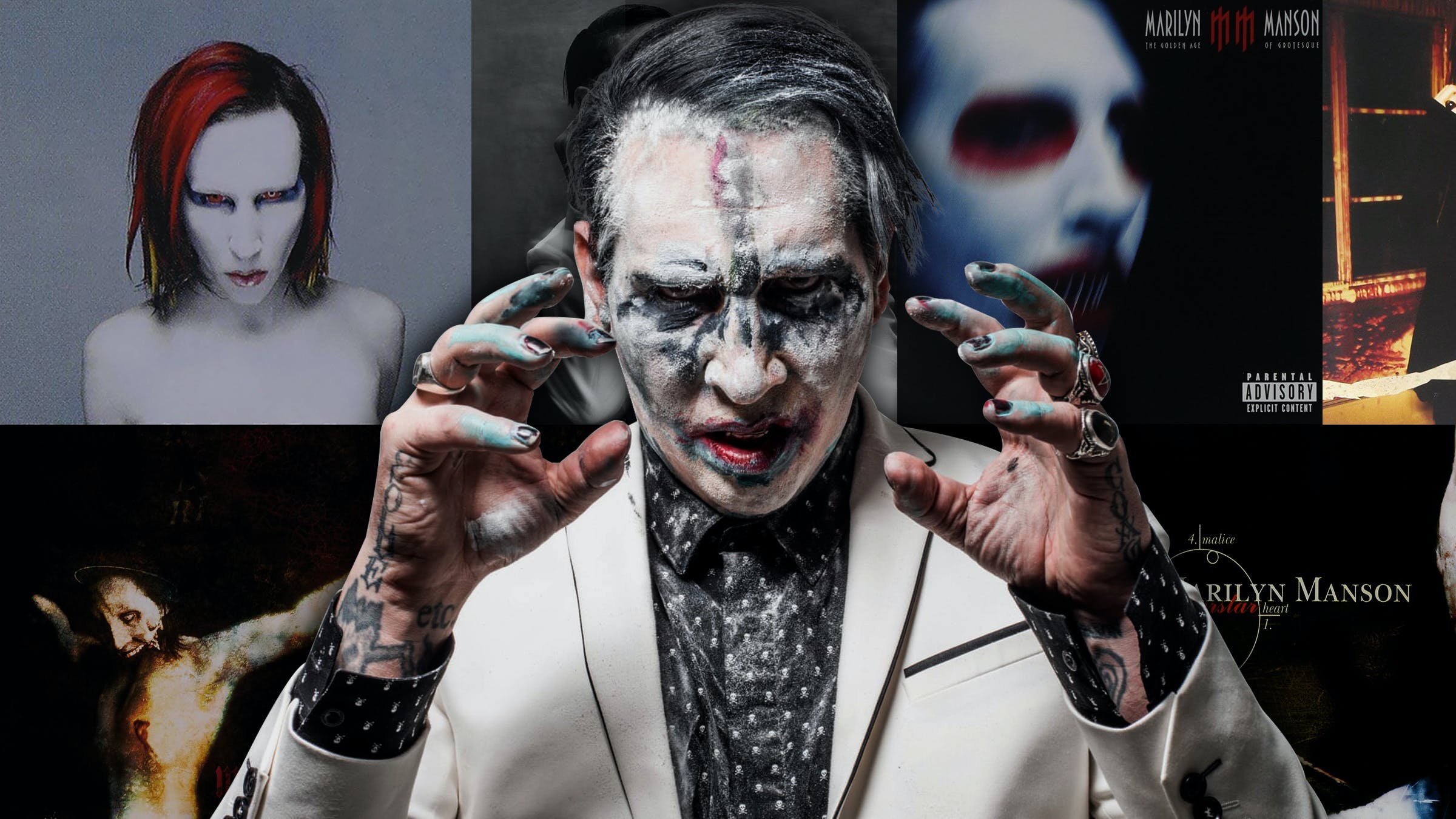 It is mind-boggling to think that Marilyn Manson is 50 years old. For us at Kerrang!, 50 is the age we intend to never leave the armchair and have our disgusted spouses bring us beer and occasionally flip the record. Mazza, meanwhile, is still pushing buttons and inspiring youthful rebellion to an unprecedented degree.

That said, looking back at it practically, it also makes perfect sense. Marilyn Manson has the kind of storied career that most rock stars could never dream of, and in it he's accomplished more insane and awesome things than anyone ever imagined.

Here, in honor of the God of Fuck's big 5-0, is our list of Marilyn Manson's 50 greatest achievements. Happy birthday, boss.

50. Making us scared of Mickey Mouse

Only Marilyn Manson could put on a Mickey Mouse hat and end up looking more frightening than any human being alive.

It's a fair assessment to say Manson went through a bit of a bad patch for most of the ’00s, but previous two albums The Pale Emperor and Heaven Upside Down have been stone-cold killers from Double M.

48. Covering This Is Halloween and giving every goth kid what they truly wanted

Years and years after A Nightmare Before Christmas’ actual release, Manson covered its opening song. For once, all that praying to Satan around a black candle paid off.

Jack Daniels may be all the rage for good ol’ boys in bands like Motörhead and Pantera. But Manson? He decided to repopularize the hallucinogenic liquorice hooch that Oscar Wilde tripped balls on. What have you done with your life?

I am the God of Fuck. This is the Koala of Fuck.

As they both rose to fame in the mid-to-late-’90s, Manson and Zombie were often pitted against each other by the media as rivals. The fact that Manson joined forces with his technicolor road dog counterpart for several tours all these years later speaks to his ability to recognize real.

44. Making everyone think he had a rib taken out so he could blow himself

It’s not true, though. Wait, is it? No. Maybe? See, he still has us wondering. That's hardcore.

43. The reveal in the Starfuckers Inc. video

Man, that chick Trent Reznor is dragging around looks pretty messed up. I wonder where he found – OH GOD, IT’S MANSON.

42. Going platinum looking the way he does

It’s easy to sell a million records when you’re a beautiful pop star. But as a wiry, self-abusing transvestite with a fetish for Satan? You gotta be pretty damn good to pull that off.

Most dudes dream of someday standing next to Dita Von Teese. Manson, on the other hand, wooed and married the most beautiful fetish model in the world. Props.

With Tourniquet, Manson proved himself an excellent songwriter without going hard on the military marches or swear words. The opening lyric – “She’s made of hair and bone and little teeth/Things that cannot speak” – is the ’90s goth-industrial mindset in a nutshell.

39. Starting one record label, then another, just because he could

In 2000, Manson started vanity label Posthuman Records, which released only two albums – Godhead’s 2000 Years Of Human Error and the soundtrack for Book Of Shadows: Blair Witch 2. Posthuman went defunct in 2003, but Manson started a new label, Hell, etc., in 2010. Its sole artist? Marilyn Manson. The dude has his shit on lockdown.

“Santa has syphilis this year. I’ll be taking over. I hope you’ve been very naughty.”

37. Showing his entire ass all the time

We don’t see Fred Durst flashing his juicy booty to the crowd for his entire career.

An underrated gem from 2000’s Holy Wood, Born Again is both enjoyable danceable and deeply venomous. That Manson can write B-sides this incredible is a testament to his talent.

These days, every metal dude breaks out the formalwear, but Manson was one of the first nu-metal dudes to rock a suit on the red carpet. Sure, it was a fluorescent leopard-print suit, but hey, it was the ’90s. Things were weird.

Maybe the most disturbing track on 1995’s Smells Like Children, Fuck Frankie gave a legion of American kids something to both shudder and giggle at.

During Manson’s age, extreme metal was toning shit down and nu-metal was all about giant stage props like toilets. Manson went weird with it, turning himself into a giant black Christmas tree and bringing out a gun prop onstage. Sometimes, a man on stilts is more compelling than any pyro you could imagine.

“Make love, not war. Actually, make war. And love. MAKE IT ALL.”

With one album, Manson scared everyone in America so badly, they needed a glass of warm milk and a story to get back to sleep. We mean, the cover of Sweet Dreams alone…

30. Lamb Of God: perhaps the only great nu-metal ballad

On this slow, melancholy track from Holy Wood, Manson lamented the life of a media darling and moral scapegoat. No other band could write this song and make it feel this genuine.

29. Coming up with the name Marilyn Manson

By combining the names of pop culture’s most revered and most despised cults of personality, Manson immediately got everyone’s attention. Next to that one, ‘Nikki Sixx’ just sounds like some goofy-ass shit.

28. Teaming up with Slayer for a tour

For some, the humorless, sexless, diehard extremity of Slayer would scare away a gender-bending tongue-in-cheek goth. Marilyn Manson saw something different, though: a chance to put together the most evil tour of all time. Hail Satan.

Woah. So, is there a Mister Manson?

At one time or another, we've all dreamt of doing this.

25. Copping to peeing on Korn’s catering

It’s one thing to take a tinkle-siss in Korn’s dipping ranch. It’s another entirely to announce it decades later. The stones on this dude…

THE VERY STONES! You just have to imagine how many merchandisers got shouted down by Manson… and the kind of person who jumped at the pre-order.

23. Telling Ben Stiller he has no ass in this classic VMAs commercial

There’s something about Marilyn…

We swoon in admiration every time we remember this story.

20. Forcing “shocking” nu-metal acts to step their game up

To paraphrase Chris Rock, while a lot of nu-metal rappers were trying to seem like unhinged addicts from the hood, Manson’s MO was, ‘I’m from Hell, and I’m covered in shit.’ Suddenly, rock’s angstiest had a new standard to meet if they want to get the gasps they were looking for.

“That acid kick in yet? Good. I want you to meet somebody…

Only one man could have millions of TV viewers asking the same question: “Did he kill the pig? DID HE KILL THAT FUCKING PIG?”

17. Getting metalheads into Screamin’ Jay Hawkins and the Eurythmics

In the great era of low attention spans and What Have You Done For Me Lately, Manson got people to check out the music of ’50s horror rockers and ’80s dance pop artists. Any time Annie Lennox or Screamin’ Jay got a royalty check after 1996, they had one man to thank for it.

If there was any cultural icon who courted the same level of controversy in the early 2000s, it was Eminem. In this video, the other MM left metal’s anti-rap bias behind and showed solidarity for his fellow scapegoat.

15. Tearing the mask off of American values

While everyone in the late-’90s was embracing PC culture and live-and-let-live values, Manson was screaming about guns, God, and government. His message: “This country created me. Scary, huh?”

Not every metal artist is hardcore enough to gain audience with the head of the Church Of Satan. But the Black Pope made an exception for the man who brought Satan back to America.

The track that Manson claims is his personal favorite of his own songs is a bristling, depressive ballad with tinges of country and gospel. Listen to this song and try not to imagine a dying white horse, running in slow-motion. We’ll wait.

What’s creepier than tattoos, spiked leather, or the Devil? Asymmetry.

For those of us sick of typical rock fashion and fascinated by Latino outlaw culture, the Tainted Love video was like something out of our dream journals. With a video for an ’80s cover on the soundtrack of a bad teen comedy, Manson changed the game and basically made Good Charlotte cream their paints. Ain’t nothing but a goth thing, baby.

9. Making parents more afraid of sex and drugs than the Devil

By the time 1998's Mechanical Animals was being written, Manson saw that it wasn’t worshipping Satan that scared parents, it was the decadence and ODs that came with such behavior. Instead of driving home typical diabolist tropes, he went the other way, dressing like a living embodiment of ecstasy. The moms and dads of America were beside themselves.

A sprawling epic chock full of death, hatred, and self-aggrandizing fury, The Reflecting God is a reminder that beneath all of Manson's hype and hellfire is one incredible songwriter.

Evil is creepy. Tough is scary. But a fish-white man with huge, nippleless breasts? You’re not going to lose that fight, you’re just going to forfeit.

6. His handling of the Columbine accusations

When discussing the accusations that he somehow inspired the Littletown, CO, shootings, Manson wasn’t outraged, he was thoughtful. When asked what he would say to the shooters, he said, “I would listen.” Everyone who had ever blown him off as an incendiary miscreant bowed their heads and fucked right off.

By the time Manson hit the scene, grunge and groove metal had elbowed Lucifer out of the pit, disenfranchised by all the floofy pentagram-on-the-floor paperback novel imagery of the ‘80s. Manson went hard on Satan’s humanity, trading chest hair and hooves for bondage gear and AK-47s.

From its hit single to its creepy B-sides, from its brilliant title to its perfect timing, this album is an achievement in every way, shape, and form. To hate this album is to hate good metal, period.

Where to begin? He rips on the values of all the celebrities in the audience. He screams "ASSHOLES!" at the top of his lungs on live TV. He performs The Beautiful People FOR the beautiful people. And he does it all with his ass out, posing like a broken doll and humping the microphone in between shrieks. This, right here? This is how you make them remember you for all time.