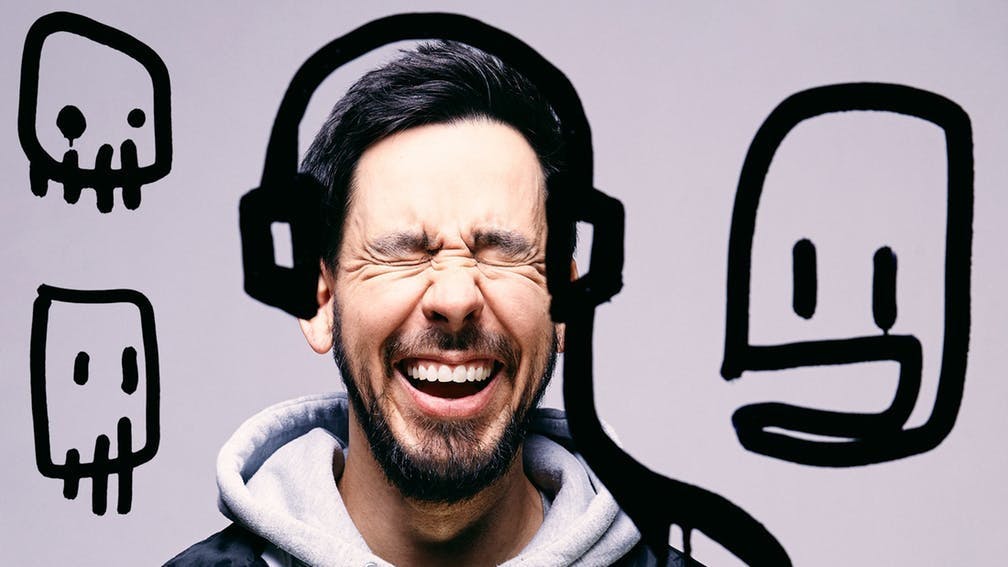 As one of the chief creative forces in mammoth-selling nu-metal trailblazers Linkin Park, Mike Shinoda’s imprint on the modern music world cannot be questioned. It’s his own passion for fresh sounds that’s proved key to keeping him on the cutting edge, as further evidenced in his own work in Fort Minor and his more recent solo material, Post Traumatic. Mike Shinoda is a man who knows his stuff, with a music taste that’s as broad and eclectic, as it is unique.

Don’t believe us? Check out this exclusive playlist Shinoda himself put together for Kerrang! readers. It’s an insight into what the man responsible for so much of your favourite music looks for when he’s kicking back and looking to be inspired. Maybe you’ll even discover a new artist you love.

“I think [rising Chelmsford punk-rapper] Ratboy’s album INTERNATIONALLY UNKNOWN is great throughout. Chip On My Shoulder just happens to be one of my favourite songs from that record. I think he’s got a great style, aesthetically and vocally. He also delivers a lot of variety from track to track, which makes it hard to pick out just one. Still, I think this is a good [place to start]!”

“Why did I pick [ex-Secret Weapons alt.rocker] Des Rocs? I don’t know a lot about him. I’m assuming it’s a him! I caught this track on a playlist somewhere and the energy of it just hit me!”

“This is an old [Illinois singer-songwriter] K.Flay song, from back in 2014. It’s the first track of hers that I really got interested in. I just thought that the songwriting was so classic: the way she forms her words, the ways that she puts ideas together in the songs is great. I like her aesthetic. I like her as a person. I like what she represents.”

“Cherub Rock is a classic – one of my favourite Pumpkins tracks. It’s a song full of raging guitars and [smashing] drums, but it sounds smooth, almost relaxing. The way it’s assembled is one-of-a-kind. I think it’s super-exciting that they’re back together working on new music. For me, the sonic combination of Jimmy, James and Billy is Smashing Pumpkins. I’ve not had a chance to see them since they’ve returned. Well, except online…”

“I like this album a lot. It’s funny that it’s called Almost Free, because what struck me when I first heard it was the loose sense of chaos about it. These guys’ songwriting is craziness – which is awesome – but, beyond that, FIDLAR sound so unhinged and free. It feels like the band is going to fall apart any minute, musically. At the same time, the record is really masterfully recorded.”

“I like a lot of grandson’s songs. He’s great. His stuff is great. If you’ve not heard the rest of his catalogue, you should go back and listen to that, too. I followed him on Instagram and it found out that we don’t live too far from each other. We met up, went out to have lunch and got to talking and hanging out. We really hit it off! He’s a great example of the upcoming generation of artists.”

“This is such a rad song! The first time I heard [Vancouver songstress] Grimes, I just thought of Björk. She’s just this unhinged artist – and when I say artist, I don’t mean musician. I mean artist. I only checked out [Montana counterpart] HANA after hearing this song, but she’s so interesting, too. I don’t think that either of them has any interest in conforming to genre or style. At all. They’ve shown through their releases that whatever they think is cool is what they’ll put out.”

“I’ve been listening to the first two Rage albums again a lot. It just takes me back to first hearing those songs. They’re legendary. They were the first group that sounded like a rock band where the singer could actually rap. I loved his One Day As A Lion stuff. Even back then, though, if [Zach de la Rocha] had decided to put out a purely rap record, I think I would’ve bought it and been into it. It didn’t need to be with the band.”

“I don’t know why I love this song [from Ontario hard-rockers The Glorious Sons]. I just love it. It’s a song that makes me want to sing along. Part of what I love is the feeling of the hopelessness of modern times that it manages to capture. There’s a sense of humour to it, but there’s also a sense of desperation. I love that contrast!”

“I came to the album late – years after it came out – but it’s so great. What would you even call this? Hardcore? Punk? Hardcore punk?! I go through phases. I was off hardcore for a little bit, but when I came back to it I was thrilled to find this. There’s something so purist about it. You have to be so committed to make a record that sounds this way. Gallows decided to steer down a darker, scarier path – for a narrower audience – because that’s the awesome music they want to make.”

“I think, to put it simply, I just like the vibe of [Californian alt. indie quintet] Young The Giant. I’ve been following them. I think their stuff is cool. They make music that speaks for itself. Sometimes you don’t need to put bands in a box. I almost didn’t put this on the K! playlist because it's so chill. Really focusing in on musicianship, though, their playing on this, and the way they’ve assembled those textures into the song is really nice.”

“Foxing are this cool, little [St. Louis] indie band that I think are at the start of something special. I remember mentioning them on social media and being told they were shocked. I think they’ve got a [unique] style, and they’re still growing into it. It sounds, to me, like a band who have a lot of potential to make something really special in the future. In the meantime, Nearer My God is really great.”

“Hearing Fugazi's 13 Songs for the first time was a definitive moment for me. I’d never come across stuff that sounded quite like that before. There was this incredible use of guitars that seemed to bring everything together. Their instrumental tracks really stood out for me, too. It’s this weird balance of raw, indie experimental punk riding the line between being something independent and trashy and something much closer to [elevating itself beyond] that!”

“This band is fucking awesome! This song is fucking awesome! I can’t really say enough good things about these guys. If you like really fun music with a lot of screaming over the top, then this is your jam. The whole Time & Space record – it reminds me of Refused! I’ve not met Turnstile yet. I don’t know if they’d even [expect] me to be putting them on this playlist. What I would say is that if I were still into skateboarding this would be my shit!”

“This is probably the newest thing that I’ve put on the playlist. I’ve only actually listened to it a couple of times thus far, but I really like it. I feel like Foals’ earlier stuff was a lot sleepier. I remember songs of theirs that I’ve thrown into playlists as being much more chilled. It’s cool to get to hear their version of a more energetic song, though. They’ve pulled it off well on this track, and I’m looking forward to more new music on the way!”

“Nine Inch Nails’ The Downward Spiral is a special record to me, and there are a bunch of special songs therein. The consistency of vision – both sonically and lyrically – are hard to achieve. The material they got on record is truly remarkable. As a song, Piggy felt like something I’d never heard the likes of before. It was fusing so many different elements that I liked and delivering them in such a tasteful way.”

Oh, you’re into Mike Shinoda? You get we’ve got a ton of stuff about Linkin Park right?