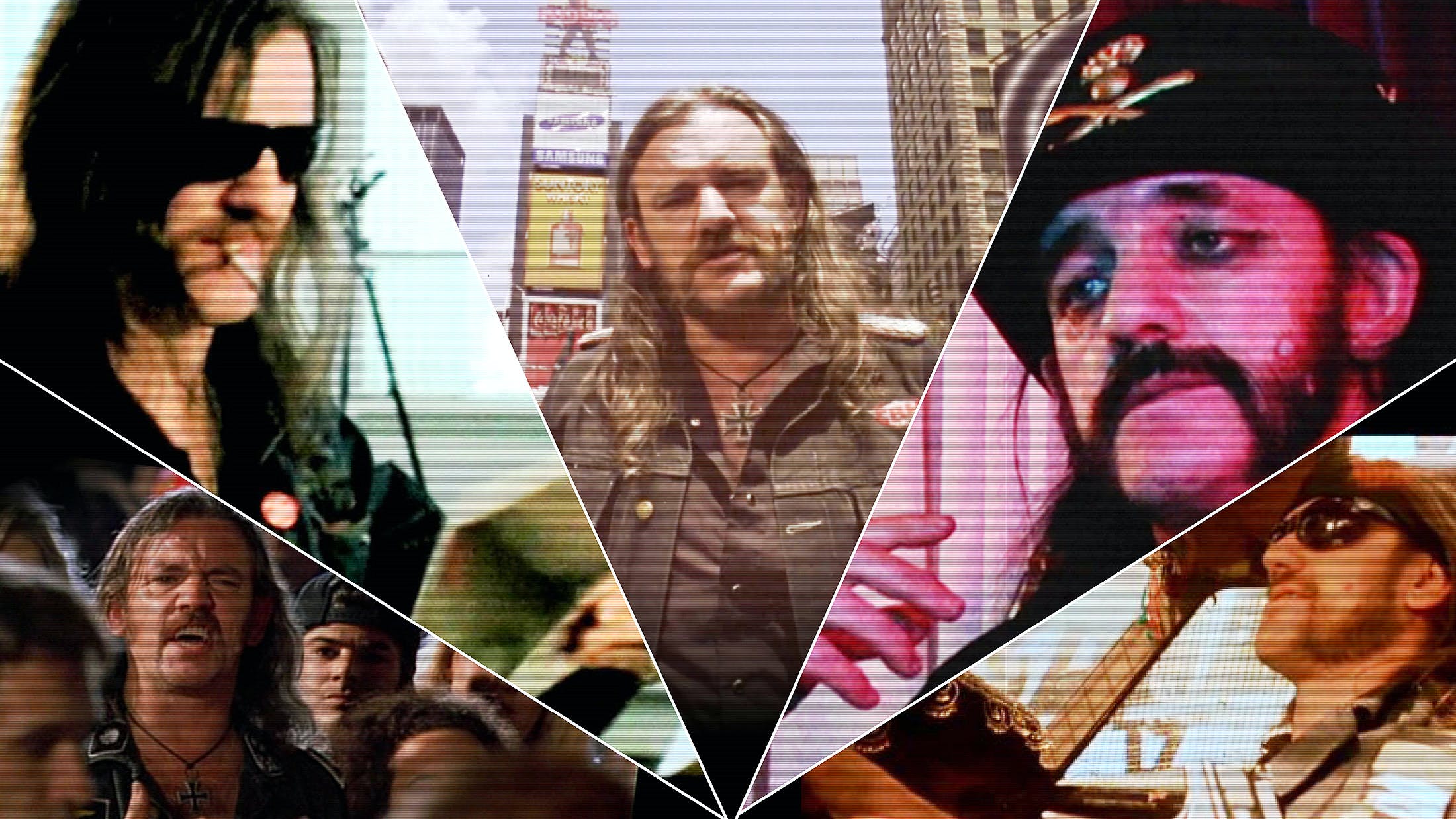 Forty two years ago today, the debut album by Motörhead arrived into the world. Ian ‘Lemmy’ Kilmister was already a rock star, but his new band made him an icon. A gnarled, sideburned, be-warted dude who growled as well as anyone has ever growled, he was the single greatest rock star to ever live and a musical giant fully committed to the rock’n’roll lifestyle.

What's somewhat less celebrated is his acting career. While he did a couple of credibility-offering cameos in 'proper' films, his film career seemed to mainly be one based around whether something seemed like a fun thing to do. A lot of his big screen appearances seemed to come from people asking him favours while drinking, or from him hanging out on set and thinking it would be a laugh. What a ledge. Let’s take a look through the man’s filmography.

(We’ve discounted concert films, documentaries and as-himself roles: this is all about acting, damn it)

The film: A satire directed by Peter Richardson that reunited Lemmy with most of the cast of The Young Ones (which Motörhead had made an incredible appearance on three years previously) and a who’s who of British alternative comedians and rock royalty – both Paul McCartney and Bill Wyman appear. Set around a restaurant called Bastards, it follows put-upon server Alex (Lana Pillay), who is driven to murder by a world devoid of compassion.

The Lem: Lemmy plays Spider, an assassin who looks exactly like the lead singer of Motörhead, and has Motörhead stickers on his briefcase. He also wrote six songs for the film’s soundtrack, including the title track.

The film: A cult sci-fi horror about a self-replicating robot that goes on a murderous spree, starring Dylan McDermott and Stacey Travis. The original cut featured so much gore that it was given an X-rating, usually reserved only for pornography. Other cameos from the rock world came from Iggy Pop and Fields Of The Nephilim frontman Carl McCoy.

The Lem: Lemmy – who agreed to be in the film as a last-minute replacement for Debbie Harry in exchange for a bottle of Jack Daniels, a deal made in a pub on Chalk Farm Road – cameos as a water-taxi operator who takes the opportunity to blast Ace Of Spades for his passengers. He ad-libbed a lot of his dialogue, feeling that screenwriters never quite understood how people like him spoke.

The film: Adam Sandler, Steve Buscemi and Brendan Fraser play the Lone Rangers, an unsigned band who accidentally take a radio station hostage in a bid to have their record played on air.

The Lem: Lemmy has an ever-so-brief cameo as a member of a large amassed crowd of metalheads. He also exists as himself in the world of the film, however – an undercover cop is discovered by his inability to correctly answer the question “Who would win in an arm wrestling match: Lemmy or God?” (The answer: It’s a trick question – Lemmy is God.)

READ THIS: The stories behind rock's most iconic album covers

The films: A trio of low-budget gory classics from ridicu-mazing studio Troma, responsible for some of the most ridiculously over-the-top violence ever shown on screen. Tromeo And Juliet is an extremely violent remake of Shakespeare’s play, co-written by James Gunn, who would go on to make Guardians Of The Galaxy. Terror Firmer follows a low-budget film crew though increasingly violent escapades, and Citizen Toxie sees the Toxic Avenger take on his even more disgusting doppelganger, the Noxious Offender.

The Lems: Lemmy shot all his Troma work for no money, insisting in only being paid in whisky. Tromeo And Juliet is narrated by Lemmy, while he cameos as an unlikely-looking reporter in Terror Firmer, and plays himself as a bystander in Citizen Toxie. He stormed off at least one Troma set in protest at waiting around all day with no air conditioning on, but maintained a great relationship with the studio, writing the foreword for director Lloyd Kaufman’s book Make Your Own Damn Movie.

The film: It’s a bit of an odd one – a violent road movie in which motocross is the biggest sport in the world. Made by motocross riders who seem extremely pleased with themselves, it’s an in-joke-laden labour of love which also features Jason 'Wee-Man' Acuna from Jackass.

The Lem: Motörhead appear as themselves (playing a set in a club that apparently runs an entire live set-up from one plug socket), but Lemmy apparently also appears as a lawyer. It’s not a widely available film.

The film: A cheerfully low-budget affair from cult filmmaker Kurt Voss, following the rise and fall of The Paper Dolls, an all-female rock band from Portland who get swallowed up by LA.

The Lem: Lemmy appears as “Joe”, a lodger who lives in a cupboard and shares sage bits of wisdom. He’s doing a big-eyes thing that is a lot of fun and may or may not have involved acting.

READ THIS: A lover letter to the Judgment Night soundtrack

The film: Four girls go on a road trip, and are stalked by a murderer voiced by Danny Trejo but played by the guy that played Leatherface in the Texas Chainsaw Massacre remake and Lobo in that one ace Lobo fan-film from ages ago. It didn’t get great reviews.

The Lem: Lemmy is credited as 'Priest'.

The show: Deadwood (which just returned for a one-off feature-length episode last month, 13 years after the series finale) was a Western featuring loads of characters based on real-life cowboys. It won loads of awards and was generally hailed as a masterpiece, but is also notable for featuring not only some of the best swearing ever televised, but so flippin’ much of it.

The Lem: Lemmy spent a day on set as an extra – look at the right of the screen at 0:12. Scott Ian from Anthrax is supposedly in there as well – he might be the blacksmith-looking figure, dead centre at 0:40, or he might be the pair of eyes briefly seen at the very, very back, at 0:07 seconds in. Either way, they both probably had a lot of fun. Lemmy supposedly also shows up in an uncredited role as “Captain Dale” in the Psych episode There Might Be Blood – according to IMDb anyway.

READ THIS: The 15 most metal songs on movie soundtracks ever

The films: Lemmy reunited with his friends at Troma in what became two films, although the second one remains mostly unreleased – it’s played in some film festivals but the Kickstarter campaign to get it on home entertainment formats is dragging on and on. They’re both extremely silly films laden with excessive gore, gratuitous nudity and dubbed-on fart noises.

The Lem: Unexpectedly, Lemmy was recruited to play the President of the United States. His scenes have really big subtitles, but he looks cool as hell behind his President Lemmy sign.

The Lem: Lemmy sadly died between the first and second of these. In Charlie’s Death Wish, he plays someone named “Lemmy” that may or may not be the Lemmy. He’s found sitting in a strip club and gets caught up in a gunfight. In the later movie, animated sequences are used to fill in for scenes that Lemmy – as vampire leader Ace, if you see what they did there – didn’t get a chance to film. It’s hard not to assume these films came out of LA drinking sessions, doing favours for old pals and pals of old pals, and there’s something kind of nice in knowing that even years after his death, silly pissed-up ideas are still coming to fruition. Good on ya, Lemmy. Miss you.