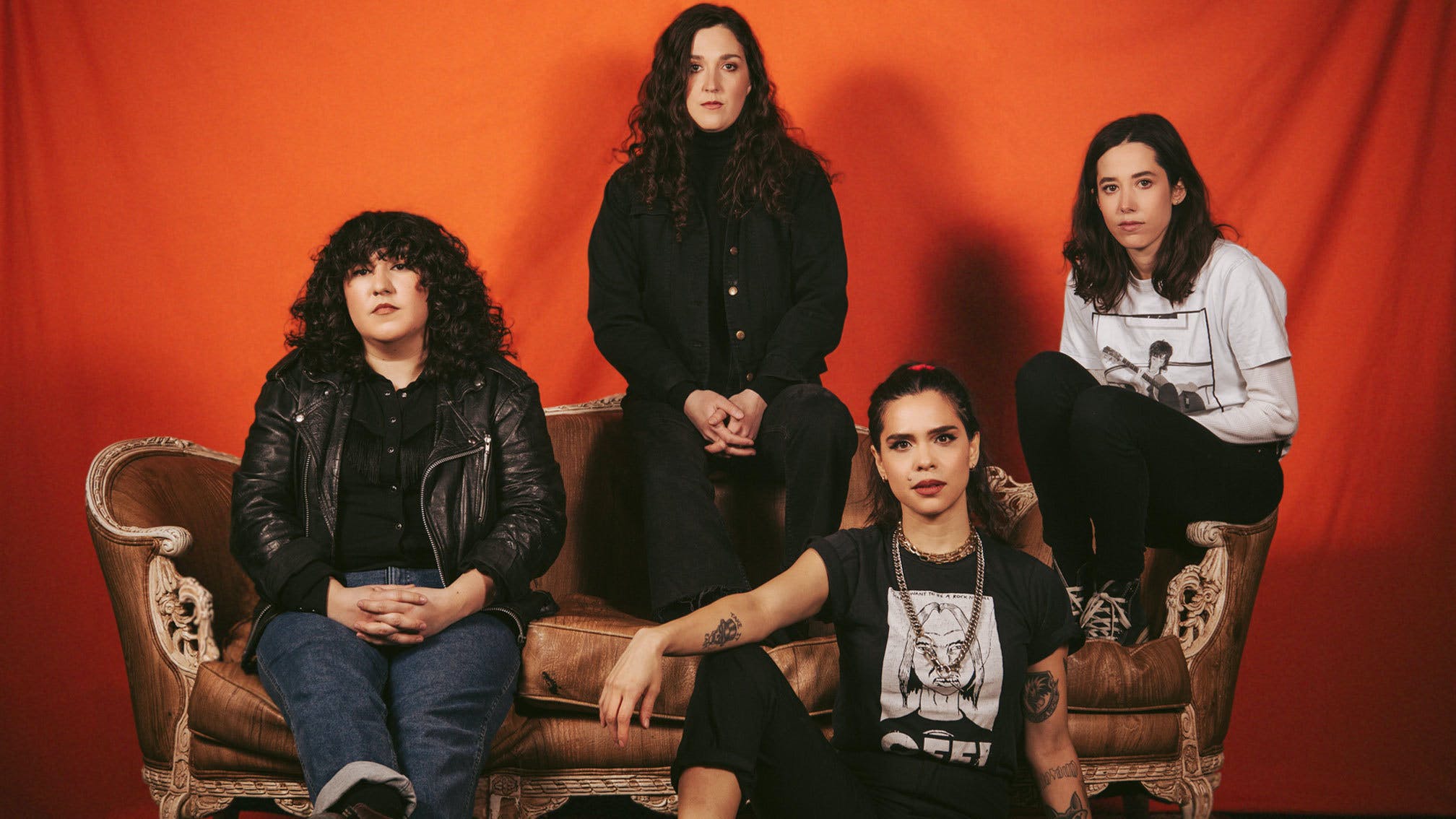 It seemed like the end of the world, but it was in fact only the beginning.

Several years ago, singer and bassist Kathryn McCaughey found herself suddenly single, and as if that wasn’t bad enough she also realised that the music she’d been working on with her ex had also come to nought. It’s fair to say that new project NOBRO – an explosion of punk and rock-inclined melody – has changed her life. Speaking to Kerrang! from her bedroom in Montreal, she constantly smiles and is only ever moments from laughter. Kathryn looks like the world’s least angry person – but it hasn’t always been like that.

“There was a lot of anger after the break-up,” she admits, flashing a conciliatory smile. “During that time I felt very desperate and isolated. I had just started playing music and it looked like it was going to end very quickly. The best way to overcome those feelings is to start a new band. I also wanted to create an environment where it was all women just shredding!”

Shred NOBRO most definitely do, but if anything it’s a term that underplays what they’re actually offering. NOBRO are really about the songs – and regardless of what genre you regard as your home base, you’ll want to hear them. The attitude might be ‘punk’ in the broadest sense, but the hook-happy melody-making bears comparison with everyone from Dropkick Murphys to Def Leppard. Basically, these songs are so good they would work for any artist.

The band’s first EP, 2020’s Sick Hustle, featured a song called Marianna, a tune more infectious than any virus, a bouncy wave of lockdown-shattering positivity. New seven-song release Live Your Truth Shred Some Gnar is every bit as good, and finds the quartet (completed by guitarist Karolane Carbonneau, drummer Sarah Dion and keyboard player/percussionist Lisandre Bourdages) expanding their already-exciting sound with unexpected blasts of Hammond organ and thrilling rhythmical divergence. But put that to one side – it’s the hooks, the insanely catchy harmonies and Kathryn’s razor-sharp vocals that are gonna put this band on your must-hear list.

Inspired by Joan Jett and The Runaways, Kathryn always wanted an all-female line-up for NOBRO (hence the name), although finding the right people wasn’t straightforward. “When I was a kid I had an all-girl gang. It wasn’t exactly the Spice Girls – we were only about six but even then there was something captivating about being part of something that was all female. Karol was still in high school when we started NOBRO. It was a lot harder back then but as we are moving ourselves into the future, opportunities are opening up. There are more female musicians in general, which is awesome.”

Although Kathryn cringes when she listens back to their earliest demos, once NOBRO had their personnel in place, the project escalated at greyhound pace. Having appeared at a local festival, they were offered the opening slot on a Canadian tour with Alexisonfire and The Distillers. “It was crazy,” remembers guitarist Karolane. “We hardly realised what was happening, but we were good. I was pretty proud of us. People that came to those shows seemed excited by our music. After one of those shows we all cried together because it had been so intense.”

Sick Hustle – and COVID – followed, a rocket ride of positivity derailed instantly by global events. Kathryn did her best to keep her head above water, and it’s only in retrospect that she’s come to realise that two years of her life, at a crucial stage in her band’s career, effectively dissolved. “When you add up the days and the weeks and the months, you look back in shock. You look around and see so much suffering in the world. You just try to stay positive – then I began to realise that so much time had gone, and I was older. Had my time passed?”

The evidence presented by their latest work suggests that NOBRO’s time is most definitely here and now. EP opener Better Each Day is as catchy as their earlier songs, but features an inspirational, gospel-tinged hook that is clearly the work of an artist finding her feet. Punky romper-stompers Eat Slay Chardonnay and Bye Bye Baby bounce like a pair of excited puppies – think of classic Ramones spiked by Amyl And The Sniffers. Even better perhaps is Get With U, a summery pop rocker that features a fly-away organ solo from Lisandre, and Sarah’s riveting, tension-inducing drum-along, both skewering convention in glorious ways.

“We have a very open way of writing,” Kathryn explains. “We’ve written with other writers, we’ve written as a band, and I’ve also worked with our producer [Thomas D’Arcy]. I feel like the rock community isn’t always that open-minded about the writing process, feeling like it should happen in a vacuum or come from just one person. Yes we worked with others on three songs, but it turned out to be an awesome experience – and whatever happens, we’re always involved.”

The quartet are not averse to, shall we say, experimentation, either. Closing song Life Is A Voyage was recorded in one take after the band had consumed magic mushrooms. “We were in a bit of a rush, because we needed to record it at the start of the mushroom effect happening,” states Karolane, matter-of-factly.

Pandemic legalities allowing, the enticing prospect of an arena tour with Billy Talent and Rise Against awaits NOBRO in April. The guitarist is taking it in her stride. “We’re excited but it’s the same thing as playing in a bar, only with more people there,” she shrugs, while Kathryn laughs at the prospect of the boss of the bar she works at coming along and seeing her onstage. “He actually hates our kind of music,” she trills, though it’s apparent that she’s energised by the challenge.

Energy is what it’s all about for NOBRO. It’s in their songs, certainly, but it’s equally clear in their attitude. Also, given the restrictions the world has been living under, there’s also a sense not just of long-awaited release, but that music might be the actual energy that unites and saves us.

“It’s fun to make music that’s so energetic and upbeat, particularly in the times we’ve been living through,” Kathryn ponders. “In the darkest times you almost forget it exists – and then suddenly there it is. Music! It brings you back to who you are. And it’s going to be okay.”