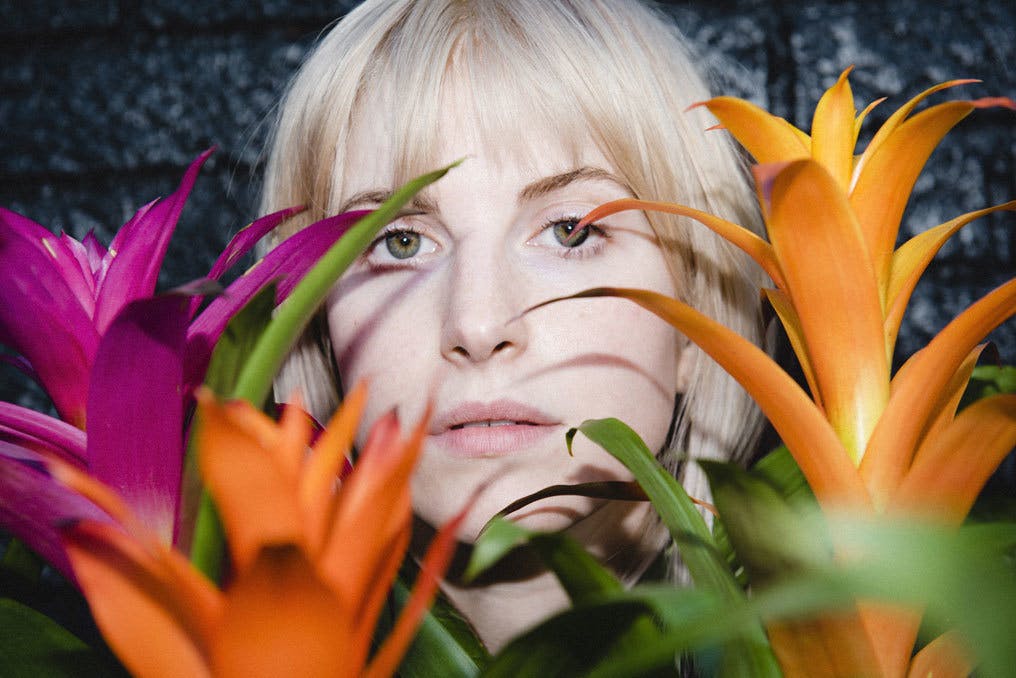 When Kerrang! spoke to Paramore for their first ever cover story all the way back in 2006, the interviewer wrapped things up by asking Hayley Williams why she believed the band deserved pride of place on the front of that issue. After a thoughtful moment, the then 17-year-old star-in-the-making said, “People might not think we’re real, but we are. We couldn’t be more real. We make music that comes from the heart. And the reason we deserve this cover is so that people can read about us and see that for themselves. We’re worth listening to. There’s no-one else like us.”

Fast-forward to 2017 and Hayley had firmly established herself as the most important and iconic woman in alternative music, beloved by legions of fans. A GRAMMY winner [in the Best Rock Song category, for Paramore’s 2014 single Ain’t It Fun], she had now adorned countless magazine covers and picked up more awards than she could ever have fathomed back when the band started out. Global success was hers. She had also, however, never felt more alone, as she moved into an empty home carrying a plant and a box with the word ‘fragile’ marked on it. Her divorce from New Found Glory’s Chad Gilbert was confirmed, and the future of Paramore looked to be in the balance.

Long before she felt ready to fly solo, though, as she finally does this year, all Hayley Williams ever wanted was to be part of a family. Growing up, her home life was difficult. When she was a young child her parents split, and despite being hard-line Christians living in the Bible Belt of America they would both remarry. By the time she was 15, Paramore would get their record deal. Finally, she had her family – a band of brothers (literally in the case of guitarist Josh and drummer Zac Farro), who would tour together, share vans and room space, taking every shiny opportunity that came their way. The catch was that Atlantic only wanted to sign Hayley, with the rest of the band signed via Fueled By Ramen, the emo and pop-punk subsidiary. This was a small distinction, but one that, despite Hayley and the band’s best efforts to ignore it, would put a strain on them all.

“I was an only child and I wanted to be a part of something really bad,” the singer told The Fader many years later. “When I got signed by myself, I felt very alone.”

From the off, Hayley was portrayed in the press as the boss at the head of the Paramore family. Driving the aesthetics, decision-making and ambitions, she was the one fussing after her bandmates and answering all the questions. “We’re in a band – it’s not about me,” she would tell K! of her frustrations about the way the press framed them. To ram the point home, she performed in a homemade ‘PARAMORE IS A BAND’ T-shirt – a simple act of defiance and rebellion that spoke of an underlying anxiety about her bandmates not getting their due recognition or appreciation.

Still, when young fans ran screaming to Hayley in the streets or felt closer to Paramore thanks to her candid LiveJournal blogs, it was undeniably because she was the beating heart and soul of the band.
“The minute you met Hayley, you knew she was going to be a star,” Warped Tour founder Kevin Lyman told K! in 2015. “People connected with her, and particularly the female audience Warped is so about.”

The tension may not have undermined Paramore’s brilliance, but it was forever in the background. Hayley was the one who meant so much to fans and audiences, while also representing the marketable public face for record label executives. More than anything, though, she just wanted to keep her family around her.

Throughout their successes, good times and gut-wrenching, genre-defining music, Paramore had always been uncertain. Speaking to l’Odet in 2019, Hayley pinpoints Paramore’s ‘hard times’ as being between 2007 until right before 2017 album After Laughter – almost the entirety of the band’s journey to date, then.

In light of that, depression and interpersonal struggles dominated their best work. Around the lead-up to and release of 2009’s Brand New Eyes, the band attended group therapy to stay together. Hayley’s subsequent lyrics duly spoke to those issues: ‘We’re taking shortcuts and false solutions / Just to come out the hero’ (Turn It Off) and ‘Next time you point a finger / I might have to bend it back’ (Playing God). Shortly after, in 2010, when the Farro brothers left the band, they did so with a blog post penned by Josh that claimed he and his bandmates were “riding on the coattails of Hayley’s dream”. He also confirmed longstanding rumours that he and Hayley had dated and after their break-up, the band had gone downhill.

When K! joined Paramore at SXSW in Texas during their self-titled album run in 2013, the band were down to just three (Hayley, bassist Jeremy Davis and guitarist Taylor York). “I’m so grateful for where we are,” she said, adding of her lost-bandmates, “I can’t be mad at them for trying to find happiness in their own lives. Now I’m sitting here in the band that I wanted to be in since I was 13 years old.”

Being grateful and positive was always Hayley’s modus operandi. At least in public. But the weight and responsibility of all this disruption – within the band and also in her long-term relationship with Chad, all of which was happening throughout her teenhood and early twenties – rested heavily on her shoulders.

In the summer of 2015 she had privately left Paramore only to later, in the depths of her darkest depression, have Taylor coax her into the happy-sad contradiction of After Laughter. But the synth-pop opus almost didn’t happen. Performing it at Riot Fest 2017, standing in front of a crowd of rock fans who’d been through every twist and turn with her, she said the record was about “darkness, or sadness, or depression, or whatever you wanna call it”.

Sadly, during this album cycle journalists were ruthless. Enquiries fiercely pressed for drama and band dynamics – her Achilles’ heel. One interview, in The Fader, detailed the aftermath of a panic attack she had, subsequently digging for answers in a way that Hayley would later admit made her uncomfortable. Through another interview with a male blogger, Hayley’s regrets at having written 2007 single Misery Business were aggregated by music blogs, prompting an online scene-wide discourse around problematic lyrics. In the wake of all this pressure, it’s understandable that she would subsequently retreat from public life.

“I’ve had to be careful how I answer people who ask me questions for Paramore about these last songs,” she said in a blog with l’Odet. “Is this the place? Or is this safe? I don’t want to sound sexist, but when we’ve done interviews with male journalists it’s been really hard. It’s sacred, you know? It’s your story.”

Her story – or what she’d believed to be her story – was unravelling and in need of examination. In the same interview she revealed that Paramore was suffering, too. “I can’t keep this family together… I’m failing so badly.” She wasn’t happy in her marriage either. Perhaps, she realised, she hadn’t wanted to get married, only that she thought she did.

“I thought it would help,” she reflected. “And I couldn’t keep that together either. So I’ve had a lot of unravelling and deconstruction of my ideas of family, loyalty, commitment. There is a lot of grieving that comes with that too.”

But without her chosen family, who is Hayley Williams? To find out, she needed the space to explore and process everything that had come before. Paramore didn’t allow for that. In December 2019, Hayley announced on social media that her 31st year would be a special one. “With the help of some of my closest friends,” she stated, “I made something I’m going to call my own.”

During a craniosacral massage, as Hayley lay on her back, she had a vision of flowers growing out of her, grotesque and painful. When she came to, she found the masseuse had laid petals on her. She knew that it meant she had growing to do, and it would hurt, but it would also be beautiful. Hayley told this story and more in an interview in February with Zane Lowe on Apple Music about her new solo project, Petals For Armor.

Depression, she told him, was often a mask for other feelings. After years of bottling emotions up and suppressing darkness and anger, it was time to release everything. She began intensive therapy – alone, this time – and started to explore her relationships with her family. It was evident that her early experiences had left their mark in adulthood. She spoke with her mother about why Hayley’s dad and her had split up. With that knowledge, maybe she could understand more about why she desperately needed others in the way she did. “I’ve been trying to keep my family together ever since then, vicariously, through this band,” she told l’Odet of her parents’ split.

This is the Hayley who is learning to stand alone. In the furious DNA of the Petals To Armor music, there is also a glimpse of hope. There’s hope of eventual comfort without a romantic relationship, without tying herself to the raft of a family structure. “Now that I’m taking account of all these feelings, and I’m feeling all of them, there’s this beautiful rainbow versus just the deep end,” she told Zane Lowe.

From the depths of those dark years, there is a version of Hayley now being reborn. On the Petals To Armor album artwork, the singer holds her hand near her mouth, so the black squares of ink that she had tattooed over her ex-husband’s name on her fingers lead to a spiralling branch of squares painted on her face. They look like dark petals in the shape of a question mark, or a path to something else.

From the clay and the earth comes something feminine and beautiful, something real – nature’s way of saying that there’s still no-one else quite like Hayley Williams.

Here we gooooo! Paramore are returning to the UK and Ireland next year for a six-date arena run, with a portion of ticket sales going to Support + Feed.

The first reaction to Paramore’s new single, This Is Why

The first taste of Paramore’s new album This Is Why has arrived – and here’s what we think about it!